For your consideration: An IM conversation with one of my nearest and dearest coworkers. In which we conspire to maim or murder the voice on the other end of the company emergency call-in hotline that dragged our asses into work on time every day of this god-forsaken week, known herein as "Principal Skinner." Much self-adoration and incoherent silliness, etc. Sprocketeer: may i go home now? Sprocketeer: i'm like, dying over here man Me: this day is draggggggggggging Me: and i've wasted so much of it too Sprocketeer: totally - i'm dying Me: i'm experiencing rigor mortis Sprocketeer: i'm experiencing work hatred Me: i'm experiencing principal skinner murder fantasies Sprocketeer: do tell! Me: well, i was thinking of poisoning the water cooler, replacing his visine with tobasco, tampering with his pencil sharpener, or maybe just shooting him in his ugly little pig face...basically anyway to hurt him without coming into any direct contact with his greasiness Sprocketeer: that sounds like a start. maybe you should throw in dumping a few gallons of honey on his head, tying him to a tree on top of a red ant hill. then stand there and laugh at his agony. Me: mwa ha ha Me:... Read more →

Hola amigos. What up? I know it’s been awhile since I rapped at ya, but seriously, crazy shiat been going down on my end. No, that’s a total lie. (And a blatant case of Onion plagiarism.) This week: Snow. Ice. Add DC drivers and stir. Repeat as needed for full annoyance. My new assistant (who from this point forward shall be known as Eve3 for reasons that are hysterical to Me) starts on February 10, which is good, because the dry cleaners are threatening to give my clothes away if I don’t pick them up by then. Ha! Ba-dum-ching! Try the veal, etc. I went to the dentist yesterday. Which I hate, but it was quick and painless and I got lots o’ praise for my fantastic oral hygiene. Oh, and see here…I know everybody hates the dentist, but seriously, I have reasons. (Warning: squicky tooth story ahead.) When I was a teenager I had this one stubborn baby tooth that would not fall out. I needed braces so they yanked it and waited for the grown-up tooth to come in. And we waited. An X-ray showed that the grown-up tooth was growing in completely sideways. Freak show tooth, if... Read more →

You remember when you were a kid and snow was predicted overnight and you got all excited and in the morning you would wake up and dash to the window and there was snow but not a lot but still! snow! and you'd rush to the radio and listen to the school closings and your school was like, the ONE super-lame school that was opening on time? My job is now that super-lame school and now it's even worse because I can't take the bus here. Instead I have to get my ass up and outside and scrape a quarter-inch of ice off my car while trying to keep my balance on my (still) unplowed, unsalted street in heels and dorky $85 Ann Taylor pants. And my classes started yesterday, but they're both online so no snow days there either. Boo. Y'all, I hate being a grown-up so much sometimes. Instead of having coffee this morning, I made hot chocolate. Because that's just what you do on snow days, regardless. Read more →

So the small yet extremely loud woman in the office directly across from mine is pregnant. Again. Much shrieking and congratulating and whatnot today. There are now at least two pregnant women working here, and sometimes? That's all it takes to make you feel like everybody in the whole bloody world is pregnant except you. I hate you, World. Read more →

I Am the Boss of You

By popular demand (one person, but that's all it takes around here), the interview went fan-tab-u-lous. Getting me an assistant y'all. And she already lurves me. Although everyone gave me great suggestions for interview behavior (all involving the Muppet finger puppets, oddly enough), I kinda winged it. (Wung it? See, this is why I need an assistant.) I sort of cleaned my office, but still couldn't find her resume under the pile o' crap on my desk at first. Then I misplaced the list of standard interview bullshit I'd been given, and I dropped my pen and kinda dinged my head on my desk when I was getting it. Endearing though, right? Anyway, we talked and tawwked and she seems smart and eager and bored out of her mind at her current job. So yeah, plenty of life and soul to suck out in the months to come. And! Then! My boss's boss's boss stopped by to tell that when he talked to her, all she'd talked about was me! Me! Meeeeee! That she was interested in the job before but then she met me and I was so funny and nice and smart and totally where she wants to... Read more →

After looking at my stats and referrers, I must conclude that Tolkien was mistaken: all who wander here ARE lost, actually. While amalah.com is rife with keywords, it's horrifically devoid of actual content. So I shall address a few Google search terms, because I'm bored: Ford fuel pump recall: Yeah, you know what? Don't bother. Even though the cause of this recall (car stalls or nearly stalls in low gears on low fuel) has been well-documented and complained about since the Focus was first produced, Ford just issued the notice...but still, the parts won't be available until next month. If you car stalls, the best they'll offer you is an "interim" repair, which sounds way scary and sketchy -- like duct tape, gum and a blowtorch. When I took my car in for the Battery Incident, I asked about the fuel pump recall. Yeah, uh-huh. Got the car back with the following note on my bill: Fuel pump recall: Parts may be in next month. Ford, it’s a RECALL, for god's sake. It’s the car equivalent of YOU called ME. And then asked who the hell I was and why you were speaking to me. And then kept me on... Read more →

I have my very first interview tomorrow. I mean, it's my very first time as interviewer instead of interviewee. Professional virgin territory. Wait...that doesn't sound right...I mean, I'm not a professional virgin (methinks the jig is up on that one), but as a professional, this is vir-- Oh hell. Yeah, I'm the big managing editor 'round here and I cannot write worth a damn today. Kiss my ass, interview person. I don't need to write good no more, because I plan to make it all your job. I got the résumé and it's kind of scary-impressive. And I wore my best professional-yet-stylish suit today. Dammit. Is my pinstripe back from the cleaners? And my office is a mess. I should clean if we're going to have company. Or should I leave it messy so I look busy and super-important? I think I should move the talking Pets.com sock puppet. And maybe the Muppets finger puppets. Seriously, what is with all the puppets? I'm insane. I have a talking tribble and a Justin Timberlake bobblehead doll that I got at the dollar store. In my office, for Christ's sake. Should I have questions written out in advance? Here's what I'm thinking:... Read more → 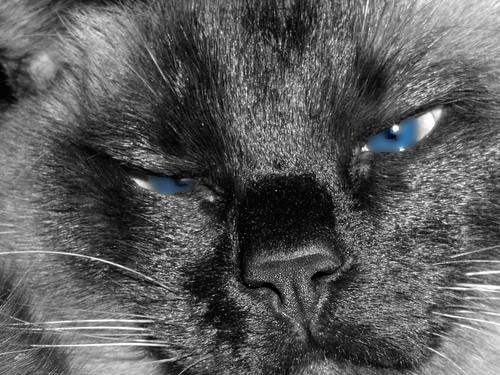 Max would like to know why y'all gotta be all up in his grill. Read more →

Post of the day from my office's "For Sale" newsgroup: FREE - Mexican Sombrero Hat One adult size sombrero -straw with colorful brim -- FREE. Barely used at Company Cinco de Mayo event 5+ years ago Ohhhh...kay. (I am sorry to report that the hat was claimed a few hours later.) Read more →