At the Cactus Cantina

So today! I had lunch, live and in person, with Chris! And I am pleased to report that he is neither weird nor psychotic. So if you were one of the people who got that funny stricken look when I told you I was having lunch with an online friend? And maybe suggested I dial "9" and "1" on my phone and hold my finger over "1" again the whole time? Chill. Amy did not get murdered in a suburban Rockville shopping mall. But! Anyway! Lunch! We had fun. Possibly a little too much fun. But then things got scary. I noticed this big, huge red thing on the table next to us. And I mean huge. Bulbous. I suddenly remembered the music video for Joan Osbourne's second single that didn't do anything and whose title I cannot remember. But she was a maid? In a hotel? And there were goldfish in the toilet? And she picked up a huge strawberry that started beating like a heart? Anyone? Hello? Well, just look. (Click for full-scale terror.) That's one strawberry, people. One. And it's bigger than her hand. And she did not have small hands. And it was just sitting there,... Read more →

The War of the Amalah

Last night Amalah.com died. Temporarily. It was a mercy killing. And it's not quite right yet. So I've been trying (And. Trying.) to set up a group weblog for all the cool boy and girls in the Judith Light Brigade. I registered a domain and everything. So la la la, I'll map the domain to the TypePad weblog, just like I did for Amalah.com. TypePad was all, "Oh no you won't!" And I was all, "Whuuut?" And TypePad was all, "No." And it went back and forth like this for awhile. (Public Service Announcement for TypePad users: If you do a TypePad blog and do the domain mapping thing, make sure you map to the SPECIFIC WEBLOG, not your main TypePad site (i.e. map to amalah.typepad.com/amalah/ instead of just to amalah.typepad.com). Because if you ever want to add another one? You have to totally screw up your first one. You have to unmap completely and restore all default DNS settings. And you feel sad and you cry and you curse a lot. And cursing makes Baby Jesus cry.) So for some reason Amalah.com seems to be working, which is weird because it technically SHOULDN'T be working. I set up the... Read more →

So much to talk about, so little to say

Here are some of the topics I considered writing an entry about: 1) Deep sea fishing for fun and profit. (Thanks, Chris.) 2) Fun things you can do with your stapler. (Again, thanks Chris.) 3) Quantum Physics, Or Things I Don't Know About Quantum Physics. (Yes, yes, thanks Chris.) 4) Why people end up looking like their pets. (Ok, Chris, ENOUGH.) 5) Why TypePad hates me. 6) The sheer awesomeness of the word "Amalaholic." 7) Who left me that voice mail just now and why won't I just pick up the damn phone and check? 8) The sheer awesomeness of the Coach (Coach!) mini-day-planner thing my friend just gave me for no reason other than her sheer awesomeness. 9) The unfairness that her sister works for Coach and gets literal buckets of free stuff all the damn time. 10) The crazy $98 price tag that we found inside the free Coach mini-day-planner and who in sam hill would pay $98 for a four-inch day-planner? 11) The amount of money I have paid Coach in the past two years and other interesting long-term investments I could have done with it instead. 12) At what point in my life did I stop... Read more →

Well, Go On Then

So I haven't posted anything since Monday night. Bad Amy! But I did just post an awesome guest entry over at Chris' place, so all you Amalaholics can get a quick fix there. I'll try to post something else later today. Somebody give me a topic. Please. (Amalaholics! Oh my god! I am SO FUNNY!) Read more → 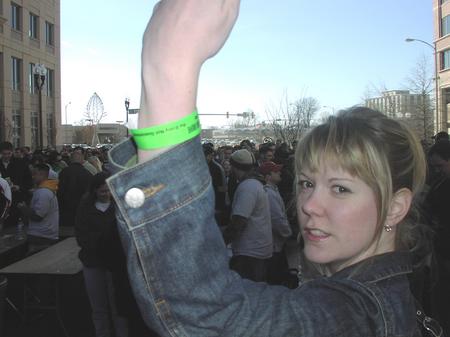 Behold! The Green Wristband of Power! The ladies. Amy has only just recently realized that the beer, it is green. Ew. This may also be soon after I was told the disturbing truth about that milkshake song. Ew ew. Amy and the Chick-fil-A cow, who is totally up in her light. Stack of green plastic cups? Multiplying. Our friend's shoe. This picture taken at his request. The Festival has run out of green plastic cups. And yet we drink on. The last known photo of the evening. Our blurry friends soon vanished into a Random Minivan, and Amy and Jason went home. To bed. To sleep. Because we're the lamiest lames who ever lamed. Read more →

So. Saturday. The annual Ballston, VA Shamrock Festival. Me, Jason, and a bunch of other people. Brunch. Mimosas. Goldschlager. Beer. Chick-fil-A. More beer. The day started with our friends Mike and Jen making us brunch. Eggs and chorizo, beans, redneck pie. And many, many mimosas. Then some sort of mojito-like rum drink, except mostly? Just rum. And this was all before 1 p.m., people. Which is good, considering I am way old and need to be put to bed by 8 p.m., apparently. A cab arrived to take us to the Shamrock Fest, which was also good, but also the high point of responsible drinking for the day. As the cab arrived? Everybody did shots of Goldschlager. Except Amy and Jason, the resident grandparents who were all, whuuuut? Amy had only had mimosas and was wobbling all over the damn place. Jason, at least, had a respectable little spread of empty champagne flutes, beer bottles and highballs. So we get to the festival. And it is cold. We are not dressed for cold and also? Cannot function at all. We're in a line for tickets, right? And it's a nice, short line. But then some guy starts hollering at us... Read more →

The Unbearable Lightness of Judith 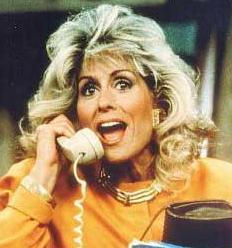 Or, Judith Light is the Boss of You Or Or, God Said, "Let There Be Judith Light" Or Or Or, Tripping the Judith Light Fantastic. There are really only three people in the world who may be finding this funny... But I don't care, because they're three of the people I love the best. Judith Light always drunk-dials her friends. (Much love and squeeeeeee to the Judith Light Brigade (Formerly Team Haiku): Chris, Coleen & Lauren.) Read more →

Eternal Sunshine of the Cluttered Mind

My desk is a MESS, y’all. Papers piled higher than my head…one false move causes an avalanche…it’s quite treacherous. So I’m trying to file and organize all this crap. But I keep getting distracted by 1) Haikus, 2) Stuff in the pile that should have been done weeks ago, and 3) Post-Its and other notes to myself that make zero sense. Like I just found this piece of paper, torn from a notepad, with the following written on it: Double-edged sword Broker Client The hell? Here’s another note: “No clear cut investment in oil patch that will protect us other than futures is.” And another: “No more 10% --> bonds allocation.” Here’s a very urgent-looking Post-It: “AD REVENUES!!” Also found: the scribbled itinerary of a flight I booked for a business trip later this month. Except that yeah, I booked the flight for the WRONG FREAKING AIRPORT. I had the state right, but that’s about it. You go to Florida, you fly to Orlando, right? No. I’m going to Pensacola, which is not only a bazillion hours from Orlando, it has its OWN AIRPORT. Who knew? Well, everybody, apparently, except me. See, up here in the North? We have very... Read more → 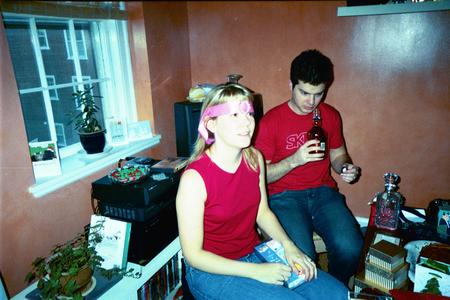 Apropos of nothing, my mom just emailed me the following picture from Christmas morning at our place. First, I am blinded by my own whiteness. I am the whitest white girl in the history of white. Second, I am holding in my lap the package of Care Bear days-of-the-week thongs. The greatest gift I have ever been given. Like today? Is Wednesday? Hump Day? So the thong is Love-a-Lot Bear. Get it? GET IT?? Third, that thing around my head is a remnant of Sephora's holiday packaging. I thought I was way original to wrap it around my head. In retrospect, not so much. For my next bit, I probably tried to put it on the cat. All over the nation on Christmas morn, pets and babies were probably tortured with the Sephora ribbon. Let's all work to put an end to this. But what do you expect? Look at Jason go with the scotch-sniffing at like, 10:30 in the morning. He's so hot when he's got the eye-opener shakes. And lastly, please note the little candy dish with the red and green M&Ms. This was my attempt to look like the good little holiday hostess. I got the M&Ms... Read more →

Ok peeps, are you ready for some hardcore Eastern poetry syllable-on-syllable action? No? Well, fuck you then. I'll just talk to the people who are. TOMORROW is the next THURSDAY HAIKU SMACKDOWN. And what is the Thursday Haiku Smackdown? Why, my lands child, it's only the most awesomest thing ever! Sit for a spell and I shall tell the story... See, last Thursday, I posted an entry. An innocent entry. A bunch of Random Crap I had sitting around my head. The very first comment was from Coleen: I cannot wait, dude Journal Con will rock the house So drunk we'll all be. (Okay, I am SO done with haiku now.) Oh, if she only KNEW. Her comment sparked a wave of haiku madness such the world has never seen. Peer pressure, show-offiness and delighting in our own hilarity helped too. Please for you to enjoy and click here for to see all haiku which that we wrote. So anyway, we had so much fun we thought we'd do it every Thursday from now on, or until 1) it's no longer fun, or 2) Too many of us get fired for major slacking on Thursdays. We rotate who hosts because... Read more →