We Don't Need No Effin' Cohesion

TODAY'S FREAKOUT, BROUGHT TO YOU BY THE NUMBER ELEVEN:

Hey, anybody remember last week? When I had seven special report things to write for work? And how much I complained about it?

Am stupid girl. Drama queen. I know NOT of what I speak.

And I won't actually have a week this time. I really have about four days. What's four divided by eleven? Or I am supposed to divide eleven by four? Or is that the same thing? How in the world have I not been fired yet?

Yes, it's back. I missed it, actually.

TODAY'S THE GREATEST GIFT OF ALL, BROUGHT TO YOU BY MIR:

So a little something arrived in the mail yesterday. Something that could really ever only be addressed to me. 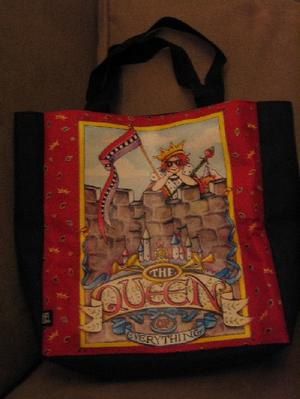 Yes. That is a tote bag that says Queen of Everything on it. Look at the marvelous detail. 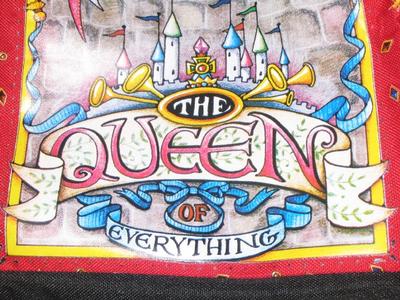 So thank you to Mir (what's that link? Mir? Mir?), for not only the perfect bag for announcing my superiority to everyone, but for also giving me an idea for this year's Halloween costume. 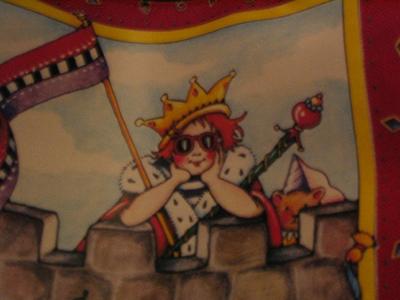 TODAY'S LAME-ASS PHOTO ESSAY, BROUGHT TO YOU BY MY OWN FILTHY FILTH:

Poor Chris. He certainly took a thrashing in Tuesday's post. I mean, there once was a time when you could go out for lunch with a friend and not have to worry about your nasty, dirty cupholders ending up on the Internet. Those days are past. Especially if that friend is me.

But! Let he who is without filth cast the first stone! The rest of you, get in line behind him! Amalah? Back of the line, toots.

I present to you, my coffee table. (At a special artsy angle, too!) This is not a cupholder. This is where I LIVE. This is where I put my feet up. And also where I eat dinner a lot of the time, which has only now occurred to me as being really, really gross.

Just what is some of that crap? Well, let's do a quick inventory, starting in the top left corner and going clockwise:

Blank DVDs for pirating movies, topped off with a copy of the Jenna Lewis Survivor sex tape, blank CDs for pirating music, my birthday card that Jason forgot to give me in December and gave me on Tuesday, the case for Carbon Leaf's live CD (empty), a burned-out and busted wireless network card, the case for Carbon Leaf's Echo Echo CD (empty), the box and manual for our new wireless network card, shit from work that I brought home and ignored, keys, a rum and coke, an empty wine glass, an empty wine bottle, TiVo remote, plates from dinner, Jason's cell phone, stamps, another rum and coke, another empty wine glass, a Gladware container of soy nuts, the manual for our new camera (in Spanish). Max loves Puppy. Puppy is loved. Puppy gets the living shit kicked out of him on every occasion. Puppy is hanging on by a thread.

AND ONE MORE, BECAUSE I LIKE WHEN PEOPLE TELL ME I'M PRETTY:

This is me, surprisingly not on drugs, just with smeary eyeliner. 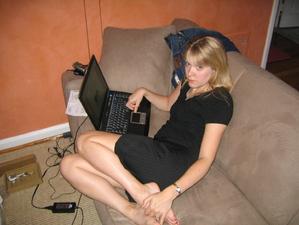 "Yes, I know I should be cleaning off the coffee table, Jason, but I'd really prefer to just hang out on the couch, over here, by your pants."

hey, eleven is my lucky number. now, get to those reports dammit!

You're pretty! And what the heck is it with men leaving their pants on the sofa?

I want a picture of that bag filled with Lisa Whelchel books, missy! ;)

Add my name to the list of people who've told you just how hot you are!

You are so pretty! And i love that dress! And how in the HELL does Max NOT knock over that glass and bottle? If we leave stuff like that out? Our cats come swat at it just to remind us they dont like clutter.

I think it's so cute how you call your alcohol table your "coffee table."

Lookit you, curled up all coy with the laptop.

That photo at an artsy angle was taken by your's truly. I'm so going to be a professional photographer someday!

Oh and the pants...well, what can I say? I like a nice breeze in the evening.

Is Jason getting ready for JournalCon? Cause I hear there's this volleyball game...

Also? Purrrrrrty. Amalah is purty. There you go!

doesn't everyone's coffee/alcohol table look like that? i know mine does... we're here, we're messy, get used to it!

and you are ever so pretty.

Does Jason do the thing where as soon as he gets home at night he takes off his pants? And maybe his shirt, too? Because Ken does that. He always has clothes strewn about his living room. Strange boys.

Also, you do NOT want to see my apartment. It makes yours look SPOTLESS. Seriously.

Dawnie, I do that too, the strip upon entry at home. I do tend to pick the items back up once I've calmed down a bit from my day. Note: Must marry non-stripper, as do not wish to share quirky habit with another.

MY GORGEOUS HOT DARLING curled up on the couch AMY!!! KISSSES FOR AMY! MWAAAAAAAAAAHHHHHHH!!!!!

Oh and Jason? My hubby does that too. I would say it's a guy thing, but my DAUGHTER, the almost 10 year old, does that too. Apparently she likes a bit of breeze in the evenings too! Hugs to you both.

There's naked volleyball at JournalCon? What? All I know is that there may or may not be "San Fernando Jones and the Temple of Poon". With wine.

That coffee table is nothing. My mom hasn't seen her dining room table since Easter.

Our goal when we move is to get a coffee table. Tom and Mitchell lived together before I was in the picture and they decided in their infinite boy wisdom that coffee tables just took up video game seating space. Yeah....
Pretty Amy!

Speaking as a Professional Lesbian, I must point out: Amy has her some nice legs.

Fabulous couch, too. (That must have been my inner gay man speaking.)

YOu know? Neither of my boys do the "walk around in the underware" thing. Of course - that may be because we have people knocking at teh door every five seconds to talk to LilZ. Odd. I don't know if I ever realized there were guys who did that.

toddler has been trained on two things (and two things only :)
1. clothes? yeah, they go in the hamper.
2. shower curtain? close it or mildrew will grow wildly and eventually kill us in our sleep.

we're convinced our alcohol table crap acutally grows from the inside.

I'm SO KIDDING, I just thought that might be really fun to say.

Thought I'd do some for you.

1. You are pretty, smeary eyeliner, and all.

2. That picture is only gross if that plate isn't from today. New plate= relaxed...old plate=you are gross. You see?

Naked Volleyball? The lure of JCon grows ever stronger.

oh, amy is so luhvely! Even WITH her messy coffee table, or even more so, because extremely tidy folks are not fun, they just make you feel bad about all of your mess. And your new bag is oh so much fun, for everyone needs to know you ARE the Queen of Everything.

Oh what a relief to know that my husband isn't the only man out there who, with all seriousness, can ask "Where's my pants" because he totally forgot what room he has left them in.

The coffee table, not bad. I'm actually impressed by the wine bottle and cd/dvds.

Having two young-uns, I tend to have crumbs, string cheese wrappers, and days old sippy cups (with milk still in them - ew) sitting on my coffee table. If I'm lucky, a pair of Barbie or Strawberry Shortcake underwear (no, not that kind of lucky, that hardly happens around here anymore. Let's just say that my daughters enjoy stripping down to their undies as much as my husband does).

Also can someone explain to me why the hubster decides that a glass with 1/2 inch of liquid in the bottom is the perfect place for a gum/cheese/candy bar wrapper? I guess he wants to make sure that I feel "challenged" at my stay-at-home-mom job. Thanks sweetie. Can't wait to see what my raise looks like!

Haha! I would have to agree with Marcie. I was looking at that pic and thinking, "My, what nice, smooth legs Amalah has." :)