This Post Has Three Titles Already, So I'm Not Typing One Here

Ok, I have a really funny story to tell you, but also many other boring things. So I've divided this ADD-like entry into chapters for easy reference as to What The Hell Amy Is Talking About Now.

THE PART ABOUT THE SCARF 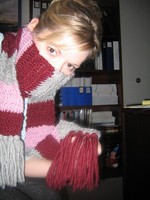 Look at my scarf! That is all mine! It is a Type A Original, already the hottest thing in crocheted couture this winter. You should totally go buy one of your very own, because it's soft and pretty and I was stopped in the PARKING GARAGE by a stranger this morning who loved it so much I was a little afraid she might rip it off my neck and run away with it.*

*That probably won't happen to you, so don't let it stop you from contacting Kristie and sending her money. 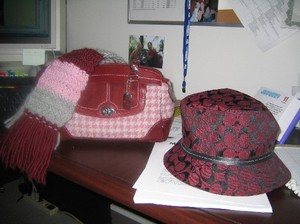 And no, this is not a coincidence. I may have a problem.

AND NOW, A WALL INTERLUDE

And I am so glad I have my warm, wooly scarf, because I STILL HAVE NO HEAT IN MY HOUSE.

I do, however, have a big motherfucking hole in my wall. 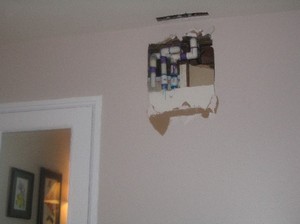 I meant to take a picture with me holding Ceiba up to the hole because she is our universal measuring unit now. (As in, "Wow, that jumbo roll of paper towels is about a Ceiba-and-a-half," or "As long as that mole on your head stays smaller than Ceiba, I wouldn't worry about it.") But I was afraid to put her anywhere close to that hole because it is about three times the size of the wee pup and is gaping and sticky and makes weird clanging noises periodically.

I am very scared of this hole.

On the plus side, I can totally see my closet through the extra bonus hole in the ceiling, which is very convenient for picking out outfits from downstairs.

Wait. I said I had a story for you, didn't I? That was supposed to be the point of this entry? Wait, what's that over there? Jangly keys! Shiny! 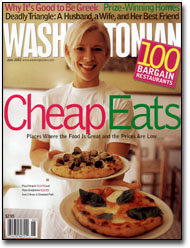 Right. This is my friend Thea. The Washingtonian put her on their cover a couple years ago because she is adorable. And because she works for a restaurant called, adorably, 2 Amys, which is my favorite place ever. Look at that pizza! Look at those authentic Neopolitan toppings! Look at that wine list (not pictured)!

Anyway, she's totally famous. But the last time we ate at 2 Amys (which was...probably about 48 hours ago), Thea told us that a relative saw her picture in a magazine. Another magazine. From like, South Carolina or something. And like most people do when their relatives start talking like this, Thea assumed they were insane.

They were not insane. Her photo had been reprinted for an advertisement. The pizza had been replaced by a plate full of not-so-appetizing-looking barbecue.

"On PAPER PLATES." This offends her.

It turns out, Thea's picture is now royalty-free stock photography. For $299.99, you too may Photoshop your inferior product into her adorable arms. Or you may buy it on CD for $499.99.

No, she does not. Well, except for that last one. She's pretty snappy. 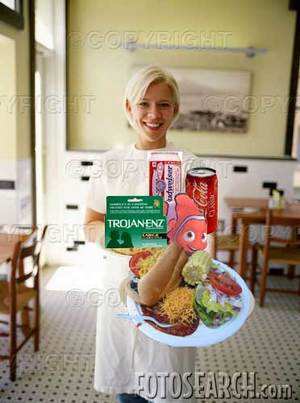 I am not pleased, yet also, deeply amused.

SO uncool about Thea. And the non-heat.

I guess we all must be careful what we sign.

The scarf, hat, purse combo is extremly cute. Sadly it is 70 here so I would not have much need for a scarf in this weather.

Wow, stock photo's are uncool only if you don't like the product they steal your picture to advertize. If they decided to steal my picture and sell say, crack, I wouldn't be that happy, but if they wanted to blatantly abuse my photo to sell Cheez-Its and Pop Rocks, more power to 'em.

That scarf is BEAUTIFUL. I saw another borntypea design last weekend in an all green version and it was just a pretty!

And has Max discovered "the hole"? Or is it safely impossible for him to get to?

is it long enough? it's five and a half ceibas.

Poor Thea!! But she could just tell people that she is a model and that holding plates is her signature pose. Look for it on the cover of next month's Vogue!

Love, love, love your scarf. I would totally give Kristie money for one, but I believe our winter is now over (it's been around 50 the last few weeks. Shut UP, it IS SO cold), but today it's supposed to reach 61. Weee!
Also? Those bitches need to fix your heat. That's just not okay.

I want I want I want....
a scarf like that..of course, oh and maybe yummy food from 2Amy's, delivered of course, 'cause Im hungry and too very lazy to go get food.

Can we really send dollars to get a scarf too?

You know, I was just sitting here feeling incomplete. Self, I said to myself, whatever shall I buy the next time I need Trojans, that would be a perfect accoutrement? Clearly another item is needed to turn a mere shopping errand into a fab ensemble. But then it came to me in a flash of blinding light and illuminating Amalahness: Nemo. Next time I purchase Trojans, I shall also buy a Nemo. Brilliant.

I'll check with the law librarians to see if she possibly may have a copyright case about using her image like that.

Oh your look a bunny tease in your notify totally fooled me.:)

I forgot- you in the scarf photo? Very Bazooka Joe!

There's just something about the juxtaposition of Budweiser and condoms in that photo that makes me happy to be alive.

The scarf is beauteous. But that hole is a little scary and the extended lack of heat is bordering on redonkulous. The Queen of Everything should not have to freeze in her own home, dammit! Someone needs to have a come-to-Jesus talk with the, uh ... heat-fixer-uppers. Or whoever handles that kind of stuff.

those condoms are about two and a half ceibas.

Nuthin' says lovin' like a box of Trojans and Finding Nemo.

I now feel stupid for posting what I thought to be an original and witty remark. That's what I get for not reading previously posted comments first. Ugh.

Fingers-crossed for your heat to be fixed. I feel your pain as we have had no heat all winter. Thankfully, winter in SoCal is like 50 degrees but that doesn't change anything. I want heat!!

I'm alarmed by the barbeque on paper plates, yes, but I am more concerned with why the hole in your wall is sticky and making noises.

Hmm, I live near 2 Amy's but haven't ventured there yet. And I'm always looking for new people to stalk while eating pizza. Fun!

Love the scarf! I got one too, via a really cool aunt. So while mine doesn't have typea coolness, it still is cute and warm.

That sucks about Thea! Damn photo releases and their fine print!

I'm just picturing you holding Ceiba up to measure the hole, and then her falling in. Then I'm picturing all of the pictures taken during the rescue attepmt where you try to fish her out with a rope or something. Then the story about the little dog trapped in the wall is all over the news. Then some rock star assembles a celebrity chorus and they create a special song to help get the dog out of the wall. With Stevie Wonder on the piano of course. It will be awesome.

Which reminds me. (What?) Have you seen the ads for the new Budweiser with added caffeine, guarana and ginseng?

WHAT THE FUCKING FUCK.

Your friend should be happy at least that she's not being forced to drink *that.*

Booyah! Great entry, girl. I love the looks I get from my fellow attorneys (uptight, East Side yuppies) when they hear me chortle and snort from behind my monitor.

ps...your hole in the wall looks to me to be about a Harold and three-quarters. (My Harold, that is...the Beagle).

You should be greatful that Thea didn't end up like our good friend Alicia...
http://www.cockeyed.com/citizen/spam/alicia/alicia.html

Ooh, I want a 2 Amy's pizza right now! The one with the fresh tomatoes and the capers. Also some of the almond cake.

Good luck with the scary hole in the wall.

Now when they fix the big hole in the wall, do you have to repaint or are you forcing them to do it? I had a similar issue when I lived in a condo, and they refused to repaint in my 'custom' color. I had to do it myself. Ugh.

I am glad that I am not the only one with a sick Coach fasination:) I sent this link to my boyfriend pointing out the lovely combo and he said in typical "Hi I am a white-boy engineer" way of his "Wouldn't it be more practical for her to buy a BLACK purse than that pinkish one?" Agh!I only hope that you got the cute change purse thing that matches your "pinkish" purse;)

Ack! I go on a six and a half hour writing jag (book, not blog) and all this activity takes place in Amalah land? And I miss it!? Sadness.

Am completely jels of your scarf. Mostly because I got one myself this Christmas from Real Boy's mother, and it too is hand made--from some fluffy yet also spiny, black and silver, futuristically frightful material.

Between your hole and my scarf...I expect Wes Craven to be calling annnny minute now.

oh my! kristie is ahMAYzing at the knitting-o-scarves! i have done a few, but they are all boring and solid-colored. BAH! jealous i am.

i am glad you didn't put poor little ceiba up to the hole, because good LORD that is a nasty-looking hole and she is far too sweet to get swallowed up in that scary thing.

I love you site- you are one funny chick.
The big G.O.D. may smite you for the idol known
as scarf though. ;)

Maybe this is an obvious question, but how are you keeping warm? Is the heat at least rising from the condos underneath you? Poor little Ceiba needs a scarf, too!

Well, it would not have been any better than if you had planned the scarf-hat-purse ensemble!But the picture cover up attempt-Classy! Its like when you have a pimple and you try to cover it up with concealer, but it just becomes more obvious and a wierd shade of orange. Good call! Ha Ha!

Thanks a lot...I had a dream about scarves last night. Now I want one.

Ceiba as a universal unit of measurement: eFFing fabulush.
question: how is this unit "Ceiba" supposed to roll off the tongue? is it like "sy-bah", "chee-bah", "see-ba","say-ba" or none of the above?
did i mention that this corner of the internet be the shiznit?