Last night I had another in a long series of pregnancy anxiety dreams. The baby is here, and we have nothing for him. (The baby is always a boy in my dreams, which probably signifies nothing more than the fact that little boys scare the crap out of me.)

Last night's dream was nothing new. We had no name, we had no clothes, we had no furniture.

(Which is...pretty much where we stand right now. We have a mobile my mom sent, a stuffed bunny Granola sent, and of course, a highly silly rattle. And that's it. I was planning to wait until we know the sex to start buying things so I can gender stereotype to my heart's content, but apparently, my brain DOES NOT LIKE THIS IDEA VERY MUCH.)

(Oh, by the way, we did buy one piece of furniture after learning I was pregnant. It's a liquor cabinet. Go us!)

We tried to buy a car seat at one point in my dream, and were asked to provide proof of our car insurance. I opened my wallet, which suddenly contained about a dozen State Farm insurance cards, none of which was valid.

So they wouldn't let us buy the car seat.

Dejected, we wandered into a clothing store and tried to find some onesies or whatever, and they had every size except for the size we apparently needed. My arms also really, really hurt because Dream Baby was heavy and we had no stroller or Baby Bjorn or convenient cardboard box to carry him in.

We did succeed in buying diapers, but forgot wipes, so we used some damp paper towels.

Then we were home, trying to figure out why the hell our friends sucked so badly and didn't throw us a baby shower and also...weren't we supposed to be...feeding? The baby? Or something?

At this point in the dream I realized that Jason had been bottle feeding the baby for like, DAYS, which OH MY GOD, I'M A FAILURE BECAUSE I DIDN'T EVEN TRY TO NURSE SO PUT THAT BOTTLE DOWN, I'M TAKING MY BRA OFF AND FEEDING MY CHILD.

And then Jason handed me the baby. And the baby was suddenly Ceiba.

And then I woke up.

So today I decided to take on my subconscious, mano to charge card. 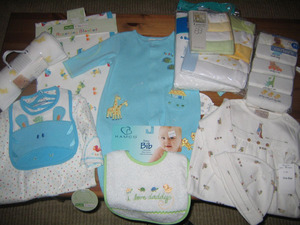 I won't bore you to death with photos of each individual twee onesie and sock, but instead present a group portrait, titled: Amy Attempts To Reason With Her Sleep Cycle By Spending Lots Of Money On Small Noah's Ark And Beatrix Potter-Related Things. Also Pictured: Burp Cloths.

When I was pregnant I once dreamt that I gave birth to our cat, Ollie, and I was really pissed because my parents had the nerve to name our baby/cat. Sigh.

A friend of mine that just had her baby dreamed more than once that the hospital wouldn't let her take her baby home because she hadn't gotten a pedicure before she went into labor. Somehow she managed to not cave to the dream and didn't get a pedicure (why I really don't know, YAY for pedicures) and was almost surprised when the hospital let her take the kid home anyway.

I'm right there with you on the weird dreams. Mine last night revolved, unfortunately, around harm coming to my child, and was fueled by late night TV viewing. Shame on me, I know. Wrote about it today as well...must be in th water.

Last night, I dreamt I kept my baby in the box my Barbie doll came in, and then carried him around a plastic bag. I'm not pregnant and nor do I have a Barbie doll. Criminy.

So your brain produces cute pregnant scary dreams. Mine? Not so cute. Most dreams of late involve "BOB" from Twin Peaks in some form. Not cute at. ALL. So be glad that you're at least grounded in some reality, I'm just stuck in Lynch-ville. Help?

I don't see a bucket in the photo. You need a bucket for a new baby (read: projectile vomit, explosive defacation, errant urine, et al).

And also? Good call on the liquor cabinet. Because when you drink, the alcohol goes through your body, into your boobies, into the breastmilk and then into the baby. And the only way you'll get any sleep in the first three months is by getting that little bugger good and tanked.

Not to worry. Those kind of dreams just mean that you are anxious to be a good mom, and? You will be! While I was pregnant and until my son was about 6 months old I wsed to dream that I was holding him and that he would start slipping out of my arms onto the floor and I could not catch him and I would wake up in a cold sweat.

I thought those anxiety dreams would go away after pregnancy or infancy, but nooooo. I had one last night that I had completely screwed up my son's kindergarten for next year by forgetting that a private school had offered us free tuition (as if!). And of course, it was somehow the worst possible tragedy in the universe.

Luckily, the next dream was about bacon, so I woke up happy.

(i've been a lurking slacker, and i apologize, but i've been cheering for you all the way!) weird baby dreams make perfect sense to me- none of the rest of your body is your own; so why should you be able to lay claim to your own subconscious? mine were always about being underwater and unable to get to the top. who knows? take a deep breath, relax and enjoy the ride! chrix

And how much do I love, love, love the Carter onesies? So much so that I've thought about buying them for my own future child, just in case they don't have them by the time I become pregnant.

During this pregnancy, I've had the most vivid and odd dreams. Most of them involve sex. But, of course, as soon as it starts to get good...I manage to have to get up to use the restroom! Just. My. Luck.

When I was pregnant with my first child, a girl, I had a dream that I left my baby in a public restroom, on the back of a toilet. That one still makes me shiver. I also have a little boy now, and let me tell you, I was unsure at first, too, but there's not much sweeter thing in the world than your little boy's head on your shoulder while he plays with your hair and whispers, "Mama."

girl, don't buy anything. people are going to buy you so many onesies you're going to have onesies for every day for like the first 60 days. first babies are always good for lots of gifts. every baby thereafter, not so much.

Very cute. Hopefully your subconscious will be satisfied and leave you alone now, because it is way more fun to gender stereotype than it is to buy gender-neutral stuff. It would bite if you had to keep buying to keep from having freak-out dreams and ended up having everything you need before you even find out the sex!

Oh yeah, and about little boys scaring the crap out of you? Yeah, me too. I have one and they still scare me....or gross me out, sometimes both at the same time. Although I'm told that boy teenagers are easier than girl teenagers, so try to keep that in mind if yours turns out to be of the male persuasion. There are some perks.

Little boys are totally scary. And you bought wipes, right? Tell me you got some wipes, because damp paper towels? Easily the scariest part of your dream. You probably also want to stock up on diapers. Also? More diapers. Believe me.

All of my vivid pregnancy dreams revolved around me re-uniting with my high school boyfriend. They were fucking SCARY, let me tell you.

And little boys are EASY.

I was a bit scared of one at first...especially b/c I had no idea HOW TO DRESS HIM CUTE.

I kind of think you'll have a boy too, only because boys can pee in your face when you change them, and then you'll have more pee stories for the internet.

And hello? Clearly your friends will throw you an enormous, goodie-saturated baby shower.

Man, I don't like to give advice, you know that. Mainly because I was 19 when I had LilZ and have ZERO advice to give, but that Kalisah? She's smart. That's good advice about the don't take the tags off thingy. I'm going to keep that in mind, assuming I make it that far of course.

And I'm also kinda partial to her because of the whole "overalls and onesies" thing which, for the record, is an ADORABLE look for a little boy.

And doesnt all of that stuff smell so good too? It's like the dust it with baby powder before they put it on the shelves.

I predicted the following:

Girl for Rude Cactus/Fish (got that one right!)
Girl for Rockstarmommy
Girl for Zoot
Boy for Amalah