Home Archives About Subscribe Advice Smackdown Tip Jar
Or, Why I Never Posted an Advice Column This Week
More Pet Photos Than Are Really Necessary 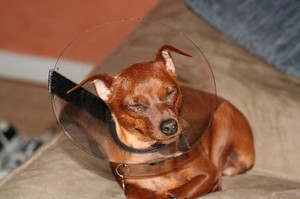 Seriously, y'all, can we get a break over here?

But then I opened my front door and got beaned in the leg by my dog, who could not see a BLESSED THING, because both of her eyes were completely sealed shut by goop and pus and eyeball-crust nastiness.

And yet I was determined to save my Evening of Nothing. So I sacrificed one of our guest towels and washed her eyes out with some warm water. Within five minutes the pus reappeared, so I called the vet and tried to convince them to prescribe some antibiotic ointment to me OVER THE PHONE, because apparently I know ALL ABOUT THIS STUFF.

She just has a little eye infection! She had one as a puppy! You gave us medicine that came in a tube! We just need a refill on that tube! Don't question me, AM EXPERT ABOUT THE MEDICINE IN A TUBE.

When the vet refused to prescribe medicine over the phone, I went searching for the eye ointment we used before, because maybe we still had some and it could get her through the weekend yadda yadda Indian food couch sleep.

Finally, my cold dark heart melted and I called Jason and told him to meet me at the vet -- our little tiny girl needed medicine and I was taking her right over. (Our vet is also a 24-hour animal hospital that takes walk-ins on an emergency basis, but I hate doing the ER visits because they cost three times as much and you wait five times as long and there's always violent nature documentaries about cheetahs eating rabbits and baby seals or whatever on the lobby televisions.)

I was so confident in my diagnosis of a blocked tear duct or some other minor eye irritation that I completely missed it when the vet first started talking about ocular ulcers and puncture wounds and surface scratches and you negligent monster you.

"Your dog. Her eyes. Are injured. Badly."

"There's a deep cut on her right eye that's infected and her left eye shows evidence of an old corneal injury that didn't heal properly."

The vet was very matter-of-fact and totally not judgemental but OH MY GOD, I COULD FEEL THE JUDGING, as if I had taken my child to the doctor for a sore throat and was told that he actually had a broken leg. From six months ago, and were you ever going to notice this child has LEPROSY?

"It's a good thing you brought her in when you did, because if this had gone untreated much longer her eyeball would have ruptured."

So we were sent home with a tube of ointment (I KNEW IT), eye drops and a very small lampshade collar. We have to take her back today or tomorrow for another check-up. 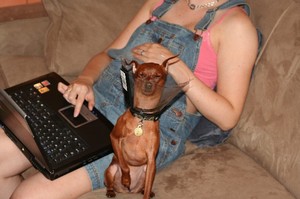 I totally think I injured her eyes while cleaning them earlier this week. Jason worries he did it while bathing her last weekend. And man, do we both feel shitty about it.

The most likely suspect, however, appears to be completely guilt-free. 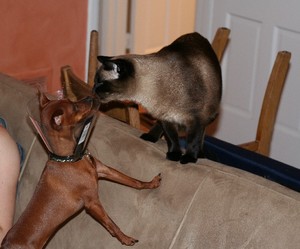 You look stupid, little lampshade dog! Share your kibble or I will bite your eyeballs out a second time!

She's doing much better now, and we got home in time for Indian food and one episode of Band of Brothers. 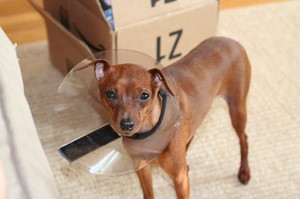 Oh no thats terrible!! Poor thing, I hope this week starts better for the 4 of you, I say 4 becuase Max never seems to have a bad week!

I'm happy to hear Ceiba is doing better. Although I get the urge to announce in a booming narrator voice "The Adventures of Spaaaaace Dog" when she's wearing the collar.

I'm convinced that the humid, allergy-ridden-air of NoVA is bad for puppy eyes. Our pup had massive crunchy-crusty-eye-goop too. Turns out it's allergies. Luckily he's much better now after daily eye drop doses. Hope your dog heals quickly too! Oh, and that your weekends get less exciting. :)

oh my gosh! Poor Cieba! I hope she recovers well, at least well enough to see around the house a bit. Glad you still got your Indian food and TV.

I'm glad to hear Ceiba's doing better! (And I feel badly for laughing at the lampshade photos, but how can you not?) I also have a cat who attacks my dog on a daily basis - I'll come home to find the dog scratched, bloody, and cowering in the corner... ironic because the cat weighs 8 lbs. and my PIT BULL is 65 lbs.

poor poor ceiba! glad she's doing better. hope this week is less stressful for all of you!

What can you do when cats rule the world? Maybe you just need to ask Max WHAT you possibly could have done and beg forgiveness. And then shield poor Ceiba from the aftermath.

Poor Ceiba! But she looks adorable, even if she herself thinks she looks stupid...

You poor thing. Have your glass of wine guilt-free, too! I did a ton of research on the subject and an occasional glass of wine is not harmful. Unfortunately, most sites just say "no alcohol" because well, it's safer to just say NONE than SOME. Can you imagine how all the idiots out there would interpret "moderate alcohol"? For sure, there would be girls bellying up to the bar saying "well, I usually do ten shots, so only FIVE would be moderate, right?

Amalah Mammalah,
Please do not have doggie mom guilt. Tell Max and Jason not to have doggie guilt either. I foster golden retrievers and had one with the same problem. My vet said the injury can occur when a little grain of dust or hair gets in the eye. When we rub our eye and rinse it to get the grit out, end of story. When dogs rub eyes to get the grit out, they just grind it in! I bet you have a tube of Sodium-something...and it helps releive the swelling. Ceiba's dignity hurts more than her eyes....
Boy, you sure had a week, didn't you? I FULLY appreciate the lovely bird photo....

See, this is why I think pets are problematic.

I could barely read the description of the canine affliction without feeling a wee bit gaggy.

Could be the sangria hangover, but queasy nonetheless.

See, when I first started reading the entry I thought maybe Max was the guilty party.. ;) I know how cats are! Glad she's feeling better. :) ADORABLE.

And yay for another Band of Brothers fan!

Poor little 1/2 a dog. I hope she feels better soon.

p.s. The 1/2 a dog nickname is meant only in a good-natured ribbing way. Do not want to inadvertantly taunt the preggo hormones too much.

Oh, the poor little sweetie. Don't feel bad--you brought her to the vet right away, which was all you could do. Real Cat got sick for the first time last year, and I was bawling at the vet. Absolutely bawling. You seem to have performed with more dignity than I.

But don't feel bad, I let my baby's thyroid disorder go for MONTHS until I finally took her to the vet and he was all...I can't believe your dog is still alive. And I was all...I suck.

But seriously, I'm thinking the cat is to blame. Does Max have claws?

Poor Amalah family, it doesn't sound like a great weekend. Definitely withhold the catnip from the culprit! It always ruins a few consecutive days for me if my pups ever feel sick or have something happen. Someone asked to pick up one of my pups the other day and then she just dropped him! On his head! I felt guilty for a week, and I wasn't even a party to the event! Hope next weekend and this week are far far better.

Let me clarify one thing about our little cat vs. dog brawl: Ceiba? Totally starts it.

She's a five-pound bully who terrorizes the 15-pound cat, and she probably got what she deserved. Yet she learned nothing, and spent all weekend charging at Max and whapping him with her lampshade.

It's hilariously sad. Especially after we dilate her pupils with the eyedrops and she runs at Max, misses, and ends up in her water dish instead.

And then we all laugh at her. Max too.

Have anyone told you yet that your pets will take a back seat to Squishy once he's born? It's totally true, BUT, when something happens to your four-legged babies, you are TOTALLY a parent to them again and will do whatever it takes to fix the booboos.

Glad everyone is OK! Take care.

Awww... girl you aren't getting any breaks!
Cieba looks tres chic with her collar and Max seems very non-caring. I'm sure he swiped at her as soon as the pic was taken. And oooo, you have the same laptop as me.

Ok the last line had nothing to do with the post, but still..

Re: Ceiba starting the whole thing. Dobergirls, be they mini or full-bodied, are just not that smart. And somehow have no concept of their actual size.

Poor Ceiba...so adorable, and yet so harassed by a kitty.. My dog has the same problem.

Dude, Kevin's mom has a fat little bow-legged, sway-backed dacshund named Frankie. Frankie has no eyes, because Frankie got some weird ass infection in her eyes and lost both of them. I swear small dogs just have weird eye problems on purpose.

And also, Frankie is totally happy and chillin' and kicks the ass of the other two dogs she lives with despite the no eye having thing, so don't feel bad for Frankie. :-)

Poor puppy! I can relate as I had an infection similar to that, which is totally sick and wrong. I got it by standing on our friggin' cheap high school's track field o' death in a high wind. Of course, this had to happen right before prom and WAHHHH NO DON'T YOU MAKE ME WEAR MY HIDEOUS GLASSES MISTER EYE DOCTOR

But everything worked out okay. He gave me permission for the night to be nerd-free, and soon Ceiba will be back to terrorizing solids (Boo, dialation!).

Well heck, I guess I can't really say anything that hasn't already been said. Here's to a speedy recovery!

Awwww, so cute - even with the collar. She's still young, they heal fast. Get well soon!

Denim overalls? I mean, I know you're pregnant and all, but I expect so much more from you.

oh my LORD, poor baby dog. how the heck could you have hurt the eye cleaning it? no, my bet is on the max. it must have been the max.

oh my gosh, my heart is all liquid-y for your baby ceiba. and poor you guys. i would feel like total shit if someone told me that i, um, hadn't noticed an EYEBALL-THREATENING INJURY! but unless there was the pus, how would you know?