First, you need to know something about your mama. She is not the type of girl who writes letters to unborn babies and posts them on the Internet. She doesn't use those pregnancy counters or little animated blinking babies or anything to indicate that she has a warm gooey center of sentimentality.

She also never thought she'd be the type to refer to herself as "Mama" in the third person, at least not until you were here and screaming inconsolably and she would try to reason with you by calming yelling back that MAMA'S EARS ARE HURTY NOW, PLEASE PLEASE CEASE WITH THE SCREAMING.

It's not that you weren't loved or wanted or the greatest thing that ever happened to me ('cause you are, already), it's just that I am not "mushy," which was what I used to call kissing scenes in movies when I was a little girl, so I'm guessing that's a word you'll understand soon if you're anything like me.

I loved you from the instant I found out you existed. And it was a fierce, protective love. I'd have given anything to protect you from the bad things that happen to tiny, tiny embryos in those early weeks of life. I ate salads and took vitamins and stressed about whether I was taking the right vitamins and if I should take another vitamin if I possibly threw up that last vitamin because oh, my God, I was so sick.

But I was mostly loving and protecting the idea of you. I mean, you looked like this. I couldn't quite believe that little blob was going to turn into an actual person, but by gum, I was going to do everything I could to give that blob a fighting chance.

There were two times when I thought I'd lost you. The first time, you were still just our little blob. The second time, we knew you were our little boy. I felt like I'd failed.  It was my job to keep you safe and growing and I'd let you down.

(You turned out to be okay both times, in case you were wondering.)

But that's the way it was, before I knew who you were. You were this strange little being inside me who would kick me (haaaard) every once in awhile to remind me of your presence. I avoided alcohol and got enough iron; and in turn, you'd delight your dad and me with the mysterious bulges and rolls under my belly. That was the deal, and I eventually came to believe that you might actually come out one day and complete our little family.

And then I saw your face.

And you're an actual person now.

I wasn't prepared for that moment. Your dad and I planned the 4D sonogram months in advance. We invited your grandparents and told them it would be "cool." I don't think they really understood what they'd be seeing.

Apparently, neither did we.

Your face appeared on a monitor and everyone in the room sucked in their breath. Your dad was sitting on a couch on the other side of the room and came running to my side to grab my hand and kiss my head and we just stared at you in absolute awe.

And how come I love him so much?

You're no longer just an idea. You're my son.

(The mind, how it boggles.)

So there you go, little guy. A very disorganized letter that takes a very long time to get to the point. Which is that I love you more and more with each passing day, to the point where my heart just might burst.

Which I probably could have just said, but like I mentioned before, I'm not the type who usually writes stuff like this, so I don't quite have the hang of it.

So hi. Love you. Crazy about you. Think you're the greatest thing since sliced bread and the most beautiful negative-12-week-old baby in the entire world.

Not that I'm biased or anything.

P.S. I think you have my chin. You're welcome. It's a good chin. 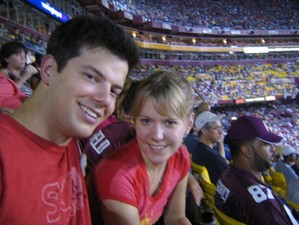 So. Cute. And your snarky street-cred is totally still there. It's just hiding.

Babies are naughty little creatures who sneak in when you least expect it and make you feel all warm and fuzzy inside. Put that adorable boy in time out.

Tears in my eyes, that was awesome. Just so you know, how you're feeling right now, it never goes away, no matter how old they get, how mature they become, they are always your little baby.

Awww. I'm not mushy either, but that was totally sweet.

i'm not a mushy gush either but when it comes to the wee babes i grew in my belly...i'm all mush, all the time.

You know, I was thinking the other day that once your little boy is here, you won't have much time for blogging. What will your faithful readers do during the work day without you? I've already started on the archives.

that was perfect in every way... love the little equation at the bottom...

Damn Amalah..ya brought tears to my eyes and that's no easy feat.

Hope he gets to read this letter one day.

So beautiful.......even minus the snarkiness. Maybe you've found your new calling w/ writing. Actually, scratch that...

Damn, is that Ice Cube sitting in front of you guys!?!!

So very sweet. It's the greatest moment, isn't it?

I really need to quit reading your feed from work -- either that or start buying waterproof eyeliner. ;) This is beautiful and so are you. Hurrah for -12 weeks and counting!

So sweet :) It's a wonder how that love and protective feeling keeps growing and there's no end to it.

oh honey. that quite possibly makes me want to be a mother more than ever.

So sweet... ANd what a beautiful picture!

My favorite thing about it is the lady over hubbies shoulder! lol..she's looking at you guys like wth??

sentimental amalah makes me cry. raging pregnancy hormones and the fact that i can't stop throwing up, that might also have something to do with the tears.

Look at all this mush! But it's totally endearing, and we won't kick you out of the Hardass club for being adorable. (yet).

So sweet. I have to leave work now because I'm all crying eyes. What a lucky baby to be so loved!

I think it's dusty in here... sniff sniff. Must be allergies because I do not cry at blogs.

I am a mushy one and I am sitting here crying. That was so beautiful!

Question- where did you rent your doppler?

:::sniffle::: dang stoopid dry contact lenses, yeah, that's it...and your little boybalah does indeed have your chin, IMO! Save that sweet letter to embarass him with someday, K?

Debbie, tryin' not to be overly sappy, at -5 weeks and counting!

OMG. I am total mush now. Thanks Amalah. I've always been mushy, but have been trying to keep it under control (which I am failing miserably at anyway) and now you just turned me into a big ole snotty mess.

I am so very happy for you guys!
I am so happy for us too!

WOULD YOU PLEASE QUIT MAKING ME CRY?? Damn it. *sniffle*

I went to that same place to get shots of our boy and WOW did your photos come out well. I got them for an Xmas present for my husband and they scared him. There was a lot of ambiguity in mine. NOt so with yours. Good tidings to the good two of you. MOtherhood is one hell of a gig!

sure I'm just echoing every other commenter, but holy shit, that was amazing. I'm weepy. And like you, I am not "mushy". Wow.

I second Humour Girl - and I would probably make my friends buy it too.

I'm suprised you didn't make this emotional wreck of a pregnant lady cry. That was so heart-warming and sweet. You're going to be such a great mom. Aaawwwww!

Absolute mush...and I loved every word of it. And the genes, dear god, your child will be just gorgeous!

enjoy the awwwwwws... cause before you know it, its the waaaaaaaas :-)

enjoy every minute... there's nothing better

You made me cry. That was beautiful. All the best wishes in the World to you and your family.

That was amazing. You're such a good writer. Thank you for letting us keep up with you and the newest edition to your family. I appreciate it. Good luck in your last 12 weeks. The time will just fly by.