I lost my temper on Friday.

I yanked Noah's arm and yelled at him.

I didn't shake him. I put him in his crib and fled the room.

I tried counting to 10, but Noah was screaming. I went into the bathroom and turned the water on full blast. I could still hear him.

I ended up in my closet, upstairs. I counted to 50. I threw a pair of shoes at the wall.

And I've never felt so alienated and cut off in my entire life. I had no one to call -- at least not anyone who could actually show up within a reasonable amount of time to help me.  And there was no one -- not my mother, not even Jason -- that I was willing to call and say what I was feeling out loud.

"Hello, I'm fighting an irresistable urge to backhand my 8-month-old child across the face. Could you please come stop me from doing that?"

No. That was NOT OKAY. That was BAD. That was ALERT SOCIAL SERVICES, YOU DON'T DESERVE A CHILD YOU FUCKING FAILURE BAD.

The thing is, it was totally normal. But how do you know that if nobody tells you?

So I'm telling you.

I lost my temper. It happens.

I went back into Noah's room and pulled him out of his crib. His eyes were damp as he reached out for me. I kissed him and said I was very sorry for yelling. He kicked me in the c-section scar. Jason called and said he was on his way home.

He started to ask something. "10 minutes." I interrupted.

I went upstairs and was asleep within five. 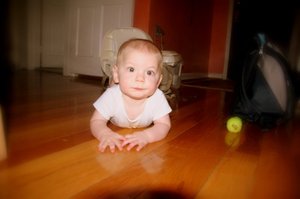 Everything was better when I woke up.

Thing is, though, I think everyone DOES tell us this stuff. But when we have kids, our heads are so full of what types of parents we will be that we just block all that out. My child won't be a pain in the ass. And I will be patient and understanding AT ALL TIMES! After you have kids and remember how you thought it would be, don't you feel like beating the shit out of your old, troll self? (Or is that just me?)

Awww! I shed a tear for you when I read that because its happened to me too. You feel just awful. You did the right thing by allowing yourself some space from the situation. When you come back refreshed and you see their cute little baby face and their sad eyes the anger/frustration just melts away. I can tell you from experience that they still won't be still for a change at 14 months!! I don't know if that will ever get better. We do alot of our changes standing up now.

Yes, nobody tells you. Those bastards! WHY doesn't anybody tell us this?!

It by no means puts you in the Bad Mommy catagory, I think it's all filed under "Human" in that big filing cabinet that hello, nobody told us about! :)

No, but the cherry on top is that you got kicked in the c-section scar as you were coming out of that moment of hell. THAT'S the kind of thing that makes you lose faith in God. I remember just crying to the ghost of my belief in God "Don't you give a shit what is happening here?? I am telling you that I need help and you are just going to turn your back on a mother and her child?? What the FUCK is that all about?!"

I am here to tell you: It gets so much easier. Once they can get their own bath and pour their own juice (have them open the dishwasher and put the cup on the door...that way they can spill and it won't matter...just make sure not to load any sharp knives while they're learning to pour this way) you will get enough of your life back to keep from going crazy.

Wow. How let you inside my head? I'll be linking to you in my blog today, because you were able to describe exactly how I feel sometimes...

Good for you for not pretending that everything is always sunshine and rainbows and unicorns. No matter how cute your kid is. I've watched my friends beat themselves up over getting frustrated with their kids, and I really don't think they should. You get frustrated and angry with everyone else in your life at one time or another, why not your children too?

So glad you posted this... very honest and brave. I've had several incidents where I felt like Vivi Walker, the mom who went nuts in Divine Secrets of the YaYa Sisterhood.

Looks like you hit a nerve with this one. Great post. Don't give yourself a hard time about this since you did the right thing.

Noah might have needed a break from you, just as much as you needed one from him.