Okay. Baby is napping. Time to write something. Something about New York.

Internet is down. Oh well. No point in writing something if I can't just go ahead and publish...

I could write about how I overslept on Thursday and missed the first two trains I meant to take and then got on another train that stopped at every damn stop in Jersey and oh my God how irritating that was to know I was going to be late for the graduation because there was a slight chance somebody in Metuchen needed to go to New York, but then you KNOW somebody will leave a comment like, "Hey! I'm from Metuchen! We're titans of industry! We're the puppy and kitten heart transplant capital of the world!" and then I'll feel like an ass. Plus, what is WITH me and the trains? I've already written about me and the trains. The trains hate me and I hate them. The end. 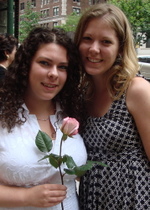 I could write about the graduation and how I got there late but there were all these people milling around the lobby so I assumed we were all still waiting to get inside, so I just stood there for awhile, clutching my ticket and probably letting my mouth hang open the way I do sometimes, the way that makes me look really stupid in the background of people's Flickr photos, but then it turns out I was standing in line with the freaking BOARD OF TRUSTEES of my niece's school who were about to march down the aisle and I was all, "SHIT." And then they almost didn't let me in even though I was all, "Pew 35! I'm supposed to be in Pew 35! Please let me in! I missed two trains for this!"

Nah. That's really boring, because in the end they let me in and I got to watch my niece graduate and hot damn, I am old. Also weepy.

Okay, there's the story about meeting Janice from The Sopranos at the post-graduation luncheon! That's a good story! Except that it was really my sister who talked to her while I stood behind her and grinned like an idiot all, "SONICETOMEETYOU HEH HEH," although it was really funny when my sister asked me which person at the table was the actress, completely oblivious to the fact that it was the woman she'd just spent 10 minutes detailing our entire life story to, and then how my brother-in-law overheard Aida bitching to someone that she was fucking sick of people asking her what fucking happened in the last three minutes, because she doesn't fucking know, so stop fucking asking her. 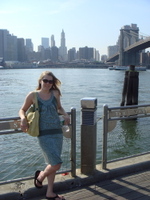 Hmm. On second thought, there really isn't too much to that story, since I was the social equivalent to a life-size cardboard cutout the entire luncheon. A cutout dipped in white wine and served with rubbery hotel chicken.

I could write about the rest of the trip...which was...a lot of pizza. And shopping. Then more pizza.

Man, but I have a headache.

Oh! Baby is awake! Must get him. God, I missed that little bugger.

So I guess there's nothing to write about after all. Oh well.

Welcome back -- I love your train stories...

Glad you're back safe. And that you got into the graduation (almost) on time. ;)

From the pictures, you remembered some pretty cute "tank tops."
Sounds fun (except for the trains.)

love your graduation dress--where is it from?

The Aida story is funny as hell, along with the rest of your post.

Could you see her tattoo?? I've often wondered is that Janice or Aida, the tattoo.

ooo pretty picture of you & the city.

i have the same hateful relationship with trains. and buses. maybe more so with buses.

anyway. glad you're back!

grew up in NJ (not too far from Metuchen, actually -- or sadly), went to school here in DC -- totally get your love/hate relationship with the freakin' trains.

But at the end of the crappy NJ Transit day, you got to see your niece graduate and isn't that the best feeling? My daughter will be the last of the 6 cousins to graduate HS (in three years), and she's already planning one hell of a family shindig!

Love your stories... Especially waiting in the lobby with the board of directors... Cute dress too!

Oh man, that killed me.

You look wonderful, by the way.

Just use the excuse that there is nothing about New York worth writing about that Woody Allen hasn't already put in a screenplay. That should satisfy most people.

I do not like the train either. Whether or not I am on-time.

You should have marched in with the trustees. *lol*

I watched my half sister graduate from High School weekend before last. That also made me feel incredibly old, also I turned 26 this Monday. That didn't help. I thought time was supposed to stop at 25!

MAN! Our girls got some BOOBS! This is the forst I've seen of her sinse she was 12ish. So pretty!

yes, yes - where DID you find the dress you are wearing in the grad picture? Love what I can see!

im from NYC, born and raised and I cant get enough pizza too. just never get sick of it! sounds like you had a good time up here. :)

I like the dress you're wearing in the picture of you in the city. But even more so your purse -- love the color.

I too want to know if enough of aida's boobs were showing to settle once and for all whether those rolling stone lips are hers or janice's.

The navy dress in the graduation picture is from Banana Republic. I found it a few weeks ago on the sale rack so I don't know if they still have it.

Oh, and the Stones tattoo is painted on. Although Aida = Janice in every other way. She is a brassy, rockin' broad.

Stopped all over NJ huh, well you should have told you I would have met you for a drink or two and then drove you to NY!

yeah, too bad you couldn't find a damn thing to say. ;)

Grew up in Metuchen...glad to see nothing's changed. Should I go back and visit?

Are you sure you didn't give birth to that girl? Like, when you were 13 or something? Perhaps she is really your sister? Crazy resemblance. :)

have you been to John's:
http://www.johnsofbleeckerstreet.com/

So, where did you get the best pizza?

If I were to plan a trip with the kids into the city to the midtown area: Grand Central, Empire State Building, Times Square, Toys 'R Us, Hershey store. Where would I take them for great pizza?

I love your blog so much that I check in daily for new posts. Noah is just a little bit younger than my daughter, and she loves to see the pictures and videos of him.

But...I have one teeny, tiny, itsy, bitsy, almost insignificant question: is it possible to lay off the f-word just a bit? Not entirely, since I find myself using it to express my feelings several times a day. But maybe just two times less than you do now. It's just that it's starting to distract from your oh-so-very-wonderful stories.

Just a suggestion. You can tell me to f-off if you feel like it and I would totally understand.

i must also state my love for the dress. both of them! i wish i looked pretty and girly in dresses, instead of..well...a lot like a dude, in a dress.

i must also state my love for the dress. both of them! i wish i looked pretty and girly in dresses, instead of..well...a lot like a dude, in a dress.

Glad you are back,and I am enjoying what I have read of your blog so far.

D'oh! My freaking connection hung and the post went through 3 times. Apparently we don't do DSL very well here in Seattle.

D'oh! DSL hung and now the comment went through three times. Apparently tech is not our strength here in Seattle. Sorry.

So cool you met Aida! Janice was my second favorite drama-queen, just behind Paulie. lol. And *nothing* happened in the last 3 minutes!