The Excitement of a Tuesday

Uh, sorry about not posting yesterday. Technical issues, you see. You wouldn't understand. I barely understand.

I have been completely unable to access Typepad or any Typepad-run sites (like....THIS ONE and THIS ONE and THIS ONE), and after spending several hours assuming that it was some kind of massive platform-down-kabloom thing, I finally figured out that no, it was just me. Sad, technically-challenged and smelly me.

Amy: What up, Typepad?

Typepad: We're just fine over here, actually. Are you sure you are connected to the Internet? Is your computer plugged in? Is it on? Is it, in fact, actually a computer or are you trying to surf the web via a cardboard box again?

I tried unplugging things ("power cycling!") and rebooting and even attempted to compose an entry on the iPhone before I finally just gave up and started scouring the web for Flight of the Conchords MP3s.

I am more than a little pleased that I finally figured out what the problem was, especially since the problem was coming from our firewall, which is not something I know anything about. In fact, I am not really sure I even knew we had a firewall. But we do, and it recently decided that my blog was malicious. Malicious! aMaLAHcom iz HAX0R!

Of course, it's not like I had anything super-interesting to write about yesterday. The firewall was not preventing the free exchange of ideas and stifling my creativity, since I probably would have just talked about one or more of the following:

2) I hate blinds. I hate shades and I hate curtains and I hate shopping for them and I hate forgetting that I haven't bought any yet, usually right when I walk in front of the window naked.

3) Ceiba has an eyeball infection and I have to give her drops, and then after I give her the drops she walks into things.

(A month ago asking Noah to "show Mama happy!" got me photos like this. Now?  I get this.) 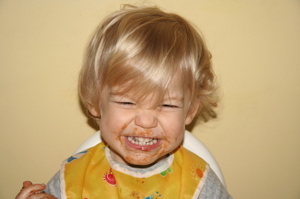 The cuteness of the Noah is blinding.

And he could possibly be the next Breck Spokestoddler.

I'm DOOOOOOMED and he's not even my kid. Hot damn, but he is one cute little boy.

We had custom blinds done at Lowe's but WE LOVED THEM. I say loved because we moved but OMG they were a dream.

We bought both the cellular kind (with the darkening shade for the bed rooms) and the fakey looking white wood kind and they rocked. Seriously rocked. They made that craptastic house look like a million bucks!

We did not buy them all at once because of the cost but if you get the right measurements and know which side you want them to have the cord - go to Lowe's, look at Bali stuff and buy - the sales people were sort of helpful but not entirely (bring your spouse or someone who can answer the questions that may confuse - well they confused me and when I looked confused I just turned my husband for support...) Lowe's will ship for free directly to your house. Make your husband install them and VIOLA you have blinds!

I hate curtains too and will NEVER EVER buy them again. Maybe a valance here or there...

OMG my fifteen cents on window coverings. Shot me now.

Awww, cutie! They flooded the damn basement?? Oh my word!

With every new picture posted, I just CAN'T GET OVER HIS HAIR. It's so awesome.

Our house came with the ugliest old lady curtains imaginable (we're talking lacy/flowery/off-white/shiny/horrible) and so we took them down after we painted. And then we put them back up because we realize you can see straight over our fence from the street into the hallway that runs between our bedroom and bathroom (a hall we often take a naked jaunt through).

We finally bought new curtains which look nice, but now we never open them because we're too lazy to remember to close them and we're right back to the original "people can see into our house" issue. BAHHHHHH.

I can choose curtains but they never make the room dark enough for me. I just got these things at Lowe's for my guest room and the baby's room? They go right on the window, and you can get them in all kinds of shades, they'll darken the room but not completely (or completely if you want) and no one can see in from the outside. It's like tinted windows. I love them, and this way I can get whatever kind of pretty-but-useless curtain I want.

I feel your pain re: window coverings. We have these white blinds that were here when we moved in (a year ago!) and I have yet to replace. I just...don't know what to get. And I am so sick of dusting these stupid blinds. 500,000 blind slats + three animals in the house = DUSTING PROJECT OF DOOM.

and, hey, congrats on outsmarting the internet!!! (no, internet, you did not hear me say that, no, please don't hurt me! I am your bitch, I swear! I SWEAR!!!)

Um...I just remembered that I had a dream last night that featured Noah which is totally bizarro because I've never met either of you and I am probably more creeped out about this than even you are.

Come on, you have to watch Cars to the end so that you can make sure Lightning has learned the lesson that friends are more important than winning. And no, I don't tear up a little every time he helps The King across the finish line.

I recommend 2" faux wood white blinds. Crisp and neat and clean AND the cat can't bend them backwards which should help prevent your house from getting that trailer park chic look. Also: when my child is born will I really have to watch kids' movies? Really?

Man, that is one happy kid. We need to replace our blinds, as our place kind of looks like a crack house from the outside.

He should model. Gorgeous!

Oh my gracious, Noah is precious. How could you blame Jason for letting him stay up late to snuggle?

More assvice on the blinds: When we re-did the kitchen we swapped our old sliding door (that lead to the deck) for a French Door option that had the blinds built in between the panes of glass. They were not cheap, but oh.my.god I wish we had them in every window of the house. Since they're between the glass they can NEVER GET DIRTY and NEVER NEED DUSTING and that fact alone makes them my favorite thing from the remodeling project. If those are an option for you guys, I would seriously consider them.

i too totally recommend 2" white faux wood blinds! just like eva! i think it was eva! i was so excited that i agreed with someone that i raced off to say so without making sure who it was. was it you, eva? hi! i agree!

also, isn't google quite something?

I know I never, ever comment but I just want to say that plantation wood blinds WIN. Our new house has them on the first floor and I am SORELY TEMPTED to replace all the blinds to match. Fabulous.

I'm not going to add to the blinds conversation (mainly because I live in New York, and we rent, and therefore the blinds come with the apartment, but I still catch the people from the office building across the street staring when I'm naked because I am too lazy to shut those blinds), but I did want to tell you that pictures of your son brighten my day.I really don't know how you get anything done with someone distractingly gorgeous running around. I bet it'd be a lot like living with Angelina Jolie.

Hey, did you cut his hair? on the sides? I hope not! I loved the little flip and it seems less, uh, flippy!
Leeann

Oh, and also- my dog just got an eye infection, too. You're lucky they gave you drops. Drops make sense. I had to put antibiotic cream on his eye, and rub it in. Have you ever squeezed what basically amounts to neosporin on your dog's eyeball?

He is still so dang cute! I never get sick of seeing his pictures.

You are AmalahMalicious!
Love the scrunchy funny face on Noah : )

That's strange. We were working on recognising facial expressions just yesterday - I don't that one would help much though.
Too cute.
Cheers

One word-or four...Faux Wood White Blinds.
We got ours at Lowes too. After two years, two boys and a cat who thinks he is a dog trying to look out the window, they look brand new. They may be Faux, but they work fo' me...and your neighbors will be friends instead of foes.
Btw, did you cut his hair..cuteness!

Wow, I wish I had that hair.
Also? Awww poor puppy!

Flight of The Conchords is my new fave. Did you know they have a TV show? We've been recording on our DVR, but you can find them at alluc.org as well.

No surprise that the firewall found your blog malicious. I mean, you ARE aimalicoius. AYE-MALICIOUS.

Now it sounds like I'm coming on to you. Perhaps I'm just attracted to your shiny new dishwasher. Or you're cute boy-child.

More likely your blog traffic. I covet it. LOL

Next playdate Michael and Noah watch cars, you and I go drinking. What, the dog can watch them? (Don't call CPS, I work for them, and I'm just kidding).

I constantly forget my blinds are open and walk by windows naked. My neighbors are probably like, oh, there's Jodi, naked again.

Seriously go and check out the cellular blinds. They are pretty awesome window coverings. We live in a rental in Brooklyn and splurged (alot) because it seriously makes a difference. You will love.

I just had to say that my son is practically in tears over your Twinkle Twinkle video. The part at the end, when he goes a little nuts - my son nearly choked on his tongue laughing.

Aah, I get irrationally happy knowing that you're getting a kick out of the Conchords. I'd love to know what the US audience makes of them! Can't wait until the series actually shows here - starts in September.

I'm sure you've found more than enough MP3s to distract you, but you can buy the Conchords BBC radio series at Amplifier (http://www.amplifier.co.nz/release/27189/complete_first_radio_2_series.html)
if you need more!. As well as lots of other great NZ music. :)

Bossy has similar Technical Failings. It can't be a good sign when the remedy is Unplugging.

Him got haircut!?! Or is it pasgettio straightener?

You're lucky Noah will still even POSE. I get either ignored, run away from, or the full body turn-away. I haven't had a face shot or a non-blurry anything in a month!!

I'm happy for you! I also build my happy - this is my house for the moment. You can help to build the house faster. And I can thank you.

But on the upside of the no-blinds situation, you WILL be the most popular people in the neighborhood.

Maybe the firewall has a thing against dishwashers. Like, you know... it just likes to revive the old software vs. hardware rivalry or something?