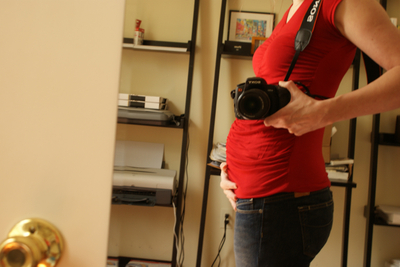 You know, I don't care how long you've been blogging, or how many entries have been accidentally eaten by a crashed browser window, or how many times you've SWORN you'll remember to save as a draft more often, or how many times you've typed something along the lines of FUCK FUCK FUCK instead of attempting to rewrite the thoughtful think-piece that just went *poof* into nothingness, IT IS REALLY REALLY FRUSTRATING WHEN THAT HAPPENS, FUCK FUCK FUCK. GAH. "Hilariously" enough, my browser crashed when I opened up another tab to conduct a Google Image Search for treble clefs so I could have a point of reference before drawing one on Noah's magnadoodle, which he then promptly erased. Oh, the "irony." (He then asked that I draw Steve, but was bitterly disappointed with my stick-figure depiction, even though I think I did a pretty good job on the striped polo shirt, especially, you know, ON A MAGNADOODLE, but WHATEVER, kid.) Eh. I think the entry kind of sucked anyway, and was mostly a lot of filler leading up to some belly photos. So...let's just say filler filler run-on sentence CAPS LOCK filler and...photo time! So the crazy sick bloating of the... Read more →

The Treble With Clef 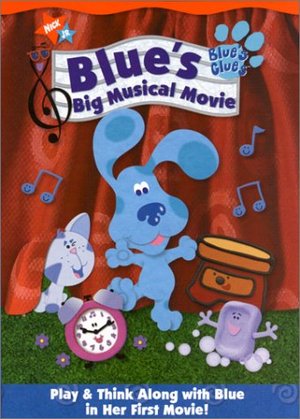 Noah has never had a singular attachment to a particular toy. He has no blankie or lovey or cribby or boobedyoopedy or whatever it is that kids have. He's gotten vaguely attached to several toys and carried them around for awhile before moving on -- he's really fond of Grover right now, but if one day Grover happens to get wedged under the couch or dropped in a parking lot somewhere Noah will most likely pay no mind. This is the fate that has befallen several stuffed toys -- and one oversized novelty crayon bank -- who have all been loved intensely for a week here and there before being tossed on the metaphorical Scarlett Fever pile without a second thought. So at least I have reasonable hope that Noah's current fixation with the dust jacket of Shel Silverstein's Where the Sidewalk Ends will be similarly temporary, because that one is just fucking weird. He's not even attached to the dust jacket itself -- he's actually enamored with the curly cursive S in the title and on the back cover. And not because it's the letter S. It's because he's decided that it's actually a treble clef, and that...well, that... Read more → 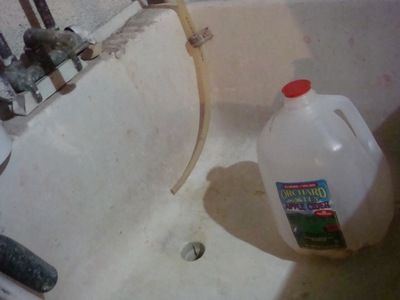 Camera status: saved! A dry micro-shammy thing that was probably purchased off an infomercial many moons ago, back when I used to stumble home from bars and watch infomercials 'til morning -- damn, what a wild, crazy diamond I was back then -- lifted the crayon off the screen in about two minutes flat. The viewfinder was a tad more difficult, since Noah managed to really mash the crayon in there, but with a little help from a revolutionary new product (order now and get DOUBLE YOUR ORDER!) called a Q-tip, I was able to clean that up as well. I possibly should have tried this, or you know, ANYTHING AT ALL before turning to the Internet, but...well, problem-solving is not my forte. I am not an Everyday Household Products As Practical Solutions Viking. I prefer to 1) panic, and 2) leave the problem for someone else to solve, lest I grab the Goof Off and allow it to leak into some tiny yet highly-sensitive electronic crevice and have the whole camera blow up in my hands like the Death Star, faster than you can bullseye a womprat. Case in point: the rising levels of apple cider in our basement.... Read more →

No, You Cannot Has Nice Things 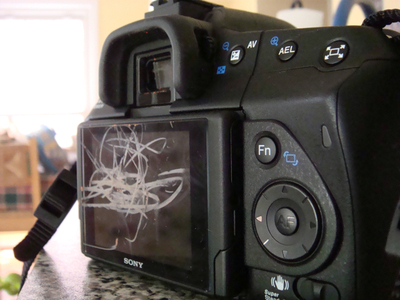 So...does anybody happen to have any tips for removing orange crayon from a brand-new camera's optical viewfinder and live-preview screen thing? Just wondering. (KILLMURDERHEADSMACK!) Read more → 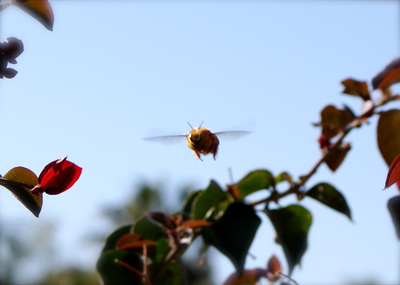 I took approximately 40,982 pictures of this bee. I do not like bees. I do not like pictures of bees. But here, look at this picture of this bee, and be grateful that I'm not making you look at all pictures where the bee is a little blurry blob because I WAS VERY OBSESSED WITH THIS BEE FOR SOME REASON. New-found camera skills aside (I should have increased the shutter speed, since I wanted to capture freeze-frame bee wings because I had it in my head at the time that freeze-frame bee wings were the ultimate in photographic accomplishment), there's a reason I should stay away from "arty" shots and photos of boring things like flowers. For example, my eye for composition is so keen that when aiming my camera at an entire garden of gorgeous blooms, the only one I managed to keep in focus was the dead and wilted one. It's a metaphor, man. You wouldn't get it. What does this button do? Oh. That one was snapped during our initial demo of all the cameras, when we were all particularly giddy and snap-happy, even though there really wasn't much to take photos of, besides the carpet and... Read more →

A Businesswoman, a Tibetan Monk & a Mommyblogger Get on an Airplane 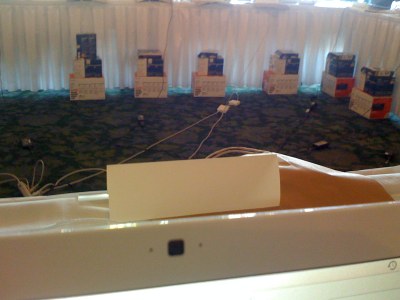 The next night I went to bed at 9:22. Party up! Or on, or whatever it is that people who party usually say. And then the next night was spent watching hours and hours of my life vanish into the time zone map as my very delayed flight home from California turned into an impromptu red-eye (HELPFUL AIRLINE MONITOR: Reason for Aircraft Delay: Aircraft Delayed), during which I really did share a row with a businesswoman and a Tibetan monk, although there is absolutely no punchline to that story, except that the businesswoman was very kind and filled me in on what I'd missed on the in-flight movie during each and every one of my 439 trips to the lavatory, and the monk brought along about 15 chicken snack wraps from McDonald's and you know what? I don't think those things are really designed to be kept in a paper bag for six hours before consuming. And now I am back on the East Coast, where I remain solidly on West Coast time, going to bed at 3 am and feeding my child breakfast at 11ish and not updating my blog at all, just like all those California bloggers. With... Read more → 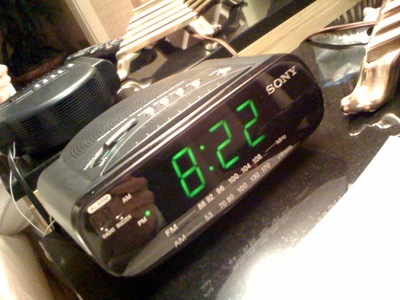 You know what is kind of embarrassing? When the hotel maid shows up for the nightly turn-down service and you are already in bed. Read more →

I'm going to California! Today! Right now! The car service is outside honking pointedly. ("CAR SERVICE" will soon be blogger code for "ALL-EXPENSES PAID CORPORATE JUNKET TRIP THING." Mark my words.) I was unfortunately unable to attend that Johnson & Johnson Camp Baby thing from a few weeks back, and afterwards I felt really left out so when an invite for a smaller shindig came from Sony I basically whined and whined until Jason agreed to take a couple days off from work so I could go listen to Powerpoint presentations and call him every 15 minutes to screech about how pretty my hotel room was and IT'S SO QUIET! NO ONE IS SHRIEKING IN MY EAR ABOUT CLUES AND PAWPRINTS AND SUPER GROVER! PLUS THERE'S FREE SHAMPOO! I AM SMELLING THE FREE SHAMPOO NOW AND YOU KNOW WHAT? THE FREE SHAMPOO SMELLS PRETTY. OK, PUT NOAH ON THE PHONE. I NEED TO KNOW WHAT HAPPENED ON BLUE'S CLUES. I will most likely be one of the only sober attendees, so rest assured that I plan to take full advantage of my fellow bloggers' inebriated states. Mercilessly, with full photographic evidence and Sharpie markers. Or perhaps I shall go to... Read more →

Eggplant Will Make Your Baby Addicted to Cigarettes & Other Important Lessons*

After digging around in my archives for Noah's first-trimester glamor shots (damn torso-only ultrasound shot! is no help! NO HELP AT ALL!), I stumbled across this entry. My first thought was, "wow, I used to make fun of people who weren't me? what a passive-aggressive little bitch I was!" And then my second thought was, "wait, I recently told the Internet about the time I peed my pants at work, I am sooooo going back to those message boards right this minute." And so I did, but it was for research. For science. In search of the answer to a very burning science-y question: Has the Internet gotten one lick smarter in the past three years? What about the radiation from photocopiers? Doesn't that pose a threat? I think I conceived on Monday and have been using a photocopier for eight hours in each of the last two days with the top up {I was copying large books, so I couldn't close it}. Could this harm the initial cell formation of the zygote as it is traveling to the uterus? Fuck that, I think I conceived ON TOP of the photocopier. Could this cause me to give birth to a... Read more → 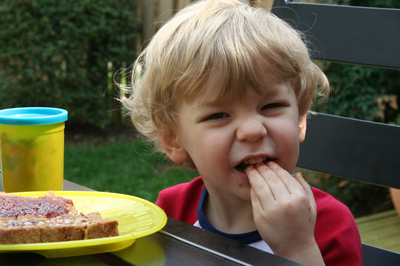 ...for the first peanut-butter-and-jelly picnic of the season. ...for the little girls next door. ...for a warm deck and soft bellies. ...and for naptime. Especially naptime. Read more →