Dear Jason, I Bring You the Gift of HYSTERICAL PREGNANT NESTING. You're Welcome.

For Jason's birthday, I made him finally replace that godawful Eyeball Nipple Lamp in the living room. Happy birthday, darling! Don't electrocute yourself, or else you might miss next year's birthday, when I make you reface the kitchen cabinets. 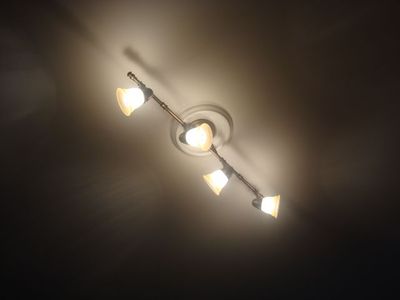 Installing this absolutely unremarkable lamp required two (2) trips back to the hardware store for missing parts, three (3) hours spent with the lamp hanging two feet down from the ceiling by a small mess of wires while we wondered how soon an electrician could come over and bail us out of this nightmare, and five (5) yards of embroidery thread, which was used in strange ways that I can't even adequately describe, except that we ended up having to like, WEAVE screws through holes, and that sounds like a dirty joke if you are Amish. Weave those screws, baby. You sure know how to churn my butter.

Now, if you come over to our house, I would like to ask that you refrain from standing on the coffee table to poke the New Lamp (I know, it's always so tempting), and also maybe from sitting on the couch and blowing really hard at it, because one set of screws we used is too long and the lamp kind of...wobbles. A lot.

I've also found another fixture that I like better than this one, but I figure we have a couple months before the stray knots of embroidery thread that are still tied around a bunch of internal screws catch on fire. Perfect! Now I don't have to make plans for our wedding anniversary.

Posted at 11:37 AM in breathtaking dumbness, houseness, Jason | Permalink | Comments (33)

Aren't the "complete" sets so complete? We are constantly having to find more screws, nuts, etc because something is either missing or doesn't work right.

At least there's no ceiling fan attached to it.

This is how I ended up holding a ceiling fan over my head for twenty minutes while Ryan gave me instructions through the screwdriver in his mouth (I was like 8 months pregnant at the time). What it is about pregnancy that gives home projects such urgency?

Hmmm...we bought a ceiling fan for my son's bedroom this weekend. I hate to think I will have to wait until my husband's birthiday to get it installed (ceiling fans seem so unnecessary in December).

I wouldn't even begin to know how to install a new lamp... twist-ties perhaps?

ugh...I hate ceiling fixtures...mostly because I"m the one w/fear of heights standing on the wobbly ladder holding the dang thing while my arms shake and Justin frantically tries to attach said fixture to the ceiling so I don't drop it on my head. Why HE can't hold it, with his strong arms and such, and let me screw it in is beyond me. But next time I may have to incorporate your screw-weaving embroidery, you know, just to make the experience more fun.

Nice. Be careful though, I did some electrical work in my apartment because the handy man guy would NEVER FIX THE LIGHT IN MY KITCHEN. 3 months later, there was an electrical fire. Guess where? Right, in my kitchen. Luckily everyone's ok but the neighbors were pissed about all the alarms.

I have a curtain rod that secretly uses duct tape for support.

Eh, I thought I was handier than this, but I have drapes jury rigged with clothespins.

Those are the kind of gifts I like to give my husband, too. Come to think of it, I even accept them as my gifts. For Mother's Day I asked only that he tile the bathroom floor that has been waiting for about a year now. Instead he gave me a home theater system, with my approval. Maybe if I buy the mud and caulk and attempt to do it myself he'll take pity on me and finally do it.

Did you get this from Lowes? The reason I ask, is because I have one very similar in my bedroom from Lowes. And ours is wobbly too. We put it up, and it went in fine, but don't you dare bump into the wall, or it may flip sideways on you! I also fear for the life of my new TV sitting under it. o.O

Not to brag, but...I have a pretty heavy train station style clock attached to the wall in my living room with screws that I coated in elmers glue so that they would adhere to the wads of tissue paper i stuck in the holes.

So, is anyone going to warn Jason that after giving birth to two children this bizarre nesting behavior manifests itself at inopportune times without benefit of pregnancy or even hormones. Something as simple as an apple placed artfully on the coffee table can be what causes a typically sane woman to begin repainting the guest bathroom at 3AM.

Thank you! I am so glad I'm not the only who things the builder-grade ceiling lights look like big boobs with erect nipples! I thought it was just me -- I've been pregnant or nursing for the past four years so I tend to have "boobs on the brain."

Wait. You're pregnant, too.

That is a gift that will keep on giving...in the form of other repairs. Hubby HATES it when all his "gifts" are Home Depot and Lowe's gift cards, but I do it anyway because I'm evil like that ; )

It's nice. And hopefully it will remain there just long enough for you to develop an appropriate level of hatred for it. Then - replacement time!

Oh, hahaha! That's hilarious. Don't you love that the longer you are married the more celebratorily (yes, I made that up)lame you can be on the birthdays:)

We do many, many projects around our house, but I refuse to do anything involving electricity. So you get points for even trying DYI wiring.

Hi Amy, long-time lurker, first-time commenter. I'm actually due with my first around the same time you are due with Baby Tivo! The replacement of the nipple light has prompted me to comment because we have a couple of these lights around our house (I thought we were the only ones that called them nipple lights! Ours actually have protruding nipple-like decorations on them, too. Glad to hear we're on the same page.) and I am electronically patting you and Jason on the back for replacing it. LOVE the new light!

That last time Doug tried to install something we had an electrical fire. So, celebrate no fire!

So, you're saying it took 2 nuts to screw in the lightbulb? The question is answered! After years of wondering!
Happy birthday, Jason!

That's great..so it only took Jason about 7 months to change the lamp..good job!
My husband needed approx ..oh, well let's see...1 1/2 years before he changed our light fixture in the hallway..there's always some "special" part they're missing..lol.

Happy Birthday to that big electrician of yours.

Aw...happy birthday to Jason! Sounds like the fun holidays my husband has changing light fixtures and painting the bathroom...isn't growing up fun?

Maybe for Christmas you can get him a remote controlled circulating tie rack. Even if he doesn't ever wear ties. Just to be cheeky and all.

And happy birthday to Jason. You two need my husband in your life - if we lived out your way I'd send him over to fix that and do all your other electrical/home repair projects:)

That lamp really isn't that bad. Also making someone do something for your birthday is really selfish. Wouldn't you rather have a gift that you didn't have to force out of someone?

Next time, call me and I'll be glad to come over from the Eastern Shore and change your light, or whatever else. Seriously.

Ah, nesting. I made the husband install a lamp in the middle of the night; an outdoor lamp. He did it, and then he was allowed back in the house.

I'm going to add you to my blogroll; let me know if you mind. Thanks!

I think it's just called "bitchy wife" if you're not pregnant then? because I totally just did this sans fetus last week.