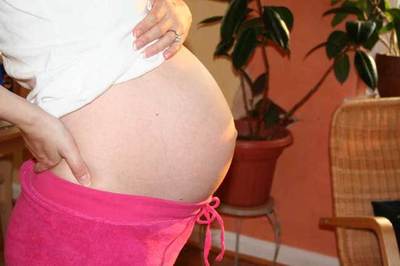 At this week's OB appointment, my doctor announced that the baby is starting to measure...and hold the fuck on to your fucking hats..."a tad big." While I've always known that another big baby was likely, I was a little surprised to hear this. (Although really, with my half-assed approach to nutrition, my European approach to a glass of wine with dinner, and the many many voicemails from Target Pharmacy's auto-fill program reminding me AGAIN to come pick up my damn prenatal vitamins, I'm not sure what else I could do recklessly wrong to keep the baby at a manageable size. Smoking, maybe. Some hardcore drugs. Cutting back on the 1,500-calorie burritos. You know, INSANE AWFUL THINGS.) I just remembered being much BIGGER last time, so I went through my archives in search of a 33-week belly photo. 33 weeks then: 33 weeks now: So...not so much of a difference as I thought. Bring on the 3-6 month onesies! While I was poking around those entries, three things occurred to me. 1) I was really very annoying back then and you should not ever read back that far, 2) in spite of that, I'd still say this blog has gone downhill... Read more →

Note To Self: Start Talking Up "State Schools" in a BIG WAY 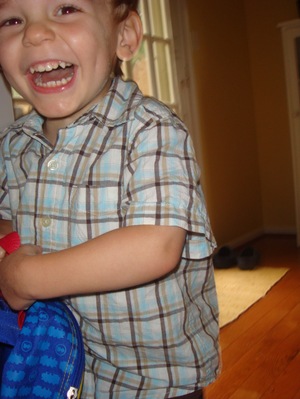 Dear Noah, Today was your second day of school. Guess what! You really, really love school. And Noah, I'm so happy you're happy there, and that you enjoy all the activities and toys and play so well with the other children -- there are always a couple kids sobbing on the rug in the morning and still sobbing on the rug at lunchtime and oh dear heavens, I'm so relieved that you're so confident and comfortable there already -- but was the cheerful "BYE BYE! MORE SCHOOL! OKAY!" and the forceful and literal PUSHING OF MY BUTT out the door when I came to pick you up really necessary? And then the tantrum and the clinging to your teacher's leg? And the hurling of your body onto the floor and the hysterical weeping the entire way down the hallway and back to the car that I'm sure caused several people to wonder if they should intervene with the toddlernapping going down out in the parking lot? All of that? Necessary? Really? I just think there may be a better way to express your love of school, is all. Love, Your Mother Who Is Having Another Baby And Totally DOESN'T NEED... Read more →

Let me tell you something about Sweetney. Okay, a few things. You know how I am. Internet friendships get a bad rap sometimes. They burn fast and bright, but are ultimately, kind of disposable, if you want them to be. Someone can be your bestest friend that you've ever bested one day -- and then suddenly it's been six months since you emailed them and Jesus, you can't just email them NOW because what are you going to say you've been DOING for the past six months? They read your blog. They know your email has probably been working at least 50% of that time and YOU SPECIFICALLY TWITTERED THAT YOU WERE DOING EXACTLY DIDDLY SQUAT ON MULTIPLE OCCASIONS so you can't even be like, "Oh, GEE, I've just been so busy! What with the...blog! And the...thing. With the place." And it's not like you're mad at them or stopped caring or reading their blog or anything...it's just flat-out easier to neglect friendships based around the Verdana typeface. Particularly if you have the attention span of a gnat. ...look! I bought a new fruit basket at Target. It's just like the other fruit basket we have, except oval instead of... Read more → 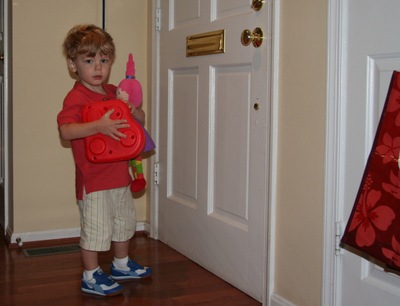 Dear Noah, This is what you looked like on your first day of school. I had a different outfit picked out for you, but our dryer mysteriously broke in the night. So you wore this. Your school required closed-toe shoes, but I forgot to make sure your sneakers still fit. So they were a little tight. I'm sorry. I combed your hair. You thought we were going to visit Nana and Pop Pop, probably because that's the only time I ever comb your hair. You liked your Thomas the Tank Engine backpack but would not wear it. You asked to stay home. I wanted to let you stay home. I wanted to ask when you got so big, so smart, so preschooler. Then you asked to get in the green car and go to school. So we did. You were a little nervous, but you did not cry. You left Pinky Dinky Doo and Baby Brother's Piano in the car -- they're in there now, waiting for you. You asked Daddy to carry you in, and he did. We forgot to bring the camera. There was a pretty little girl named Paige in your classroom when we got there, and... Read more → 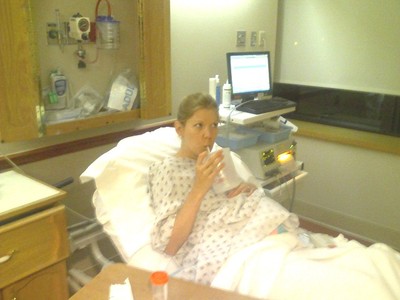 Well, THAT WAS FUN! The long version is...long. Yes. The short version: decreased fetal movement, spotting, back pain. Quick jaunt over to Labor & Delivery for diagnosis of Raging Hellfire UTI, Dehydration and One Perfectly Fine & Alive Baby. Okay, one bit from the long version -- Jason was not at home when the bleeding started, but was stuck on the Metro so my frantic phone calls of TALK ME DOWN, BITCH, HOLY SHIT went directly to voicemail, which...did not talk-me-down so much as wind-me-the-fuck-up. By the time he called back -- without actually listening to my voicemails (he later put them on speaker, right there in the hospital), but he gets points because he was calling to see if I wanted him to pick me up a burrito -- I was KIND OF SORT OF A COMPLETE WRECK, waiting for my doctor to call me back and grunting and groaning around on the floor of our bedroom, trying to find that goddamned doppler thing under the bed. As we have already learned from yesterday's post, sometimes Jason is not exactly the Even-Keeled Rock of Common Sense EITHER around here, as he immediately started yelling at me for not immediately... Read more →

The other day, while getting Noah ready for his nap, I noticed something. Something...odd...and white? What is that? The odd-and-possibly-white thing was on a...how shall I say...very delicate and highly valuable part of his anatomy. A part that I have probably not been allowed contact with since he mastered his hand/eye coordination enough to meet every attempt to clean or examine said part with a tremendous thwack. THAT'S MINE, LADY. BACK OFF. So my attempts to determine the origins of the odd white-ish thing were rather futile. I assumed it was a bit of paper, and if you're wondering why "a bit of paper" was the obvious, most-likely answer I can guess right now that you have not changed many diapers in your life, my friend, because sooner or later you will come to expect stray Cheerios and Mr. Potato Head parts falling out all the time. It's not like they have POCKETS, or anything. Eventually I realized that the...thing....appeared to actually be connected to his...thing. Like, possibly with skin. Like it possibly WAS skin. I wasn't entirely sure that was possible, but...I DON'T KNOW. I DON'T UNDERSTAND THIS EQUIPMENT. So I opted to go with my default solution for... Read more → 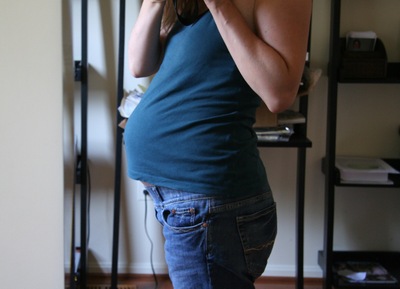 Just sat down to type a really funny story and then Noah woke up and he recently figured out how to work doorknobs AND YES I know about the childproof doorknob covers but I haven't bought one yet and he is running around without pants on and look, here are some belly photos at least I put a damn bra on this time okay. Fun fact! This is the first week my belly does not fully fit in the neat little squares of the "Crop Photo" grid. My arms are beginning to resemble the Olympic shot-putters'. Except without all the "strength" and "muscle." Mine are more "jiggly" and "marshmallow fluff." And here's some full frontal, just as a treat. Tell me, does my belly button remind you of anything? Read more → 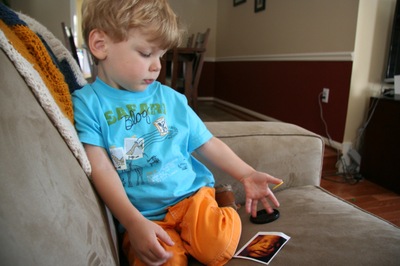 Ages and ages ago, I remember reading someone else's blog post about their child starting preschool. And it was boring! Preschool! It happens! Your kid is too big to cuddle now anyway! Send 'em off, ship 'em out, I have no time for your hand-wringing and hair-biting! Noah starts preschool on Monday. *shoves hair in mouth* We went to drop off another stack of forms and oh, I don't even know how many dollars today and were told we could go meet his teacher. Noah shyly walked around the room, played with a toy cash register and some puzzles, eagerly selected a moon-shaped sticker from a proffered baggie and recited a fairly impressive soliloquy from Blue's Clues while investigating a toy baby bassinet. ("Cinnamon! He looks like a Cinnamon. What a great name! Paprika, you just named your baby brother!") (We've been watching "The Baby's Here!" episode quite a bit, for obvious reasons.) Then Noah spotted a pile of posters on the floor -- shapes, colors, numbers, all waiting to be be hung up. "An octagon!" he shouted. "Stop sign is octagon." He moved on to the next poster, which was about counting to four. "Five, six, seven, eight, nine,... Read more →

All This & More, Thanks to the Wonder of Technology

Some of the hideous post ideas I started and trashed yesterday: "My kitchen sink is drip...drip...dripping and aaaaaahhhhhhhhhstopit!" "Dear Dog and Cat: How do manage to time your vomiting TO THE EXACT MINUTE we run out of paper towels?" "Yeah, so I WANT to write another installment in the Deodorant Wars, but I've been struggling to come up with a plot line for my new stick of Dove Clinical Protection. Who IS she, as a character? What's her MOTIVATION?" Then I was all: cop-out time! Noah photo! Belly photo! But then all the camera batteries were all simultaneously dead. Simultaneously and AT THE SAME TIME EVEN. Clearly, the blogging gods were against me, determined that I should keep at least a few damn thoughts to my own damn self. This was, judging by the above examples, probably for the best. I don't really have much else to say today, other than to issue a warning to anyone in the DC area: hey! You know what's a bad idea? Like, a really, really bad idea? Blindly following your GPS, even when it's telling you to turn left onto a one-way, do-not-enter street that happens to be oh, directly in front of... Read more → 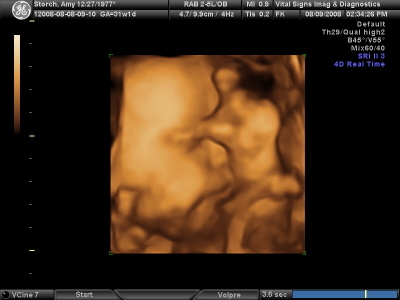 God. Am a walking, gestating rerun. The same thing happened last time, but I cannot HELP IT. I am currently too distracted by my fat little stack of photos of my fat little orange ghost-fetus to write about anything except how much I looooooooooohhhhve him. Want to snuuuuuuggle him. To hug him and squeeze him and call him George.* Then I want to punch myself in the face a little bit, because DAMMIT WOMAN, STOP SPOONING THAT SHEET OF WALLET-SIZED PHOTOS AND GO REORGANIZE THE LINEN CLOSET. But. Then. Those. Cheeks! Smooooooooosh. *He will not be called George. I wasn't really very gung-ho about the 3D ultrasound this time -- Jason actually ended up making the appointment, once it became clear that I was constantly "too busy" to call, what with the phone being alllll the way over there, and my butt being alllllll the way over here. (For those of you who asked -- this was an elective, non-medical ultrasound, paid for with cash money. To some teenager at the mall. At a combination sonogram/frozen yogurt kiosk. Free froyo with every 30 minute session!) (Not really.) Anyway. I was...reserved, this time. Partially because I was terrified the ultrasound would... Read more →