Hello, Internet! How's about some vaguely creepy photos of my orange ghost-fetus? I think he's the sweetest little orange ghost-fetus in the world, but I could see how you might think I'm biased. And yes, he is definitely a he. A he who is remarkably modest, but still, we got one good glimpse of the undeniably male goods before he crossed his legs up tight for the remainder of the session. He is also a he who looks JUST LIKE HIS BIG BROTHER, holy crap, except possibly (God help me) a little chubbier. He kept his hands in front of his face during most of the ultrasound, attempting at times to get as much of his thumb and hand and arm as possible into his mouth to suck on. I take this as a prenatal sign of his chompable deliciousness, and also: mah boobs are already a little scared. He did all the typical fetus things. He opened his eyes, stuck out his tongue, gnawed on his fingers, kicked and rolled and smushed himself into the placenta when he'd had quite enough of me rolling from side to side and jostling my belly in hopes of getting a clearer look... Read more →

We've outlasted the marriages of people who predicted the demise of ours. We've ended up a million years from where we started, and from where we probably expected to be. I tumble into tired clichés every time I try to come up with words worthy of this anniversary, this milestone, this day like any other day, really. We'll wake up on 08/09/08 and...keep at it, for another 10, 20, 60 years. If I get to be that lucky. 10 years, in two-and-a-half minutes. It feels like that, sometimes. 10 Years (Take Two) from amalah on Vimeo. Music: Together Forever in Love by Go Sailor. (EDIT: Sorry for the video glitch. I uploaded in the middle of major site maintenance at Vimeo and lo, there were Issues. I've reuploaded it and I think everything is working now.) Read more → 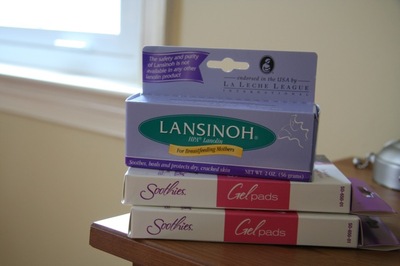 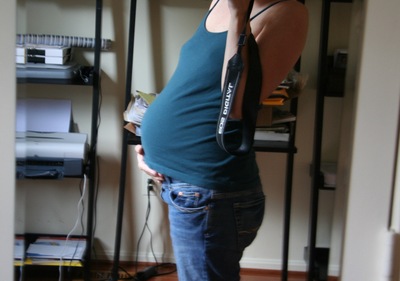 BUT FIRST Thank you for your very important feedback. I have compiled the results (you know, for WORK. and SCIENCE.) and it turns out most of you move the potty seat or would move the potty seat, were you to be confronted with the potty seat. Also, a surprisingly high percentage of you were slightly mortified by the mere suggestion of NOT moving the potty seat. With the window of innocence shrinking every day here on the Internet, I'm always pleased when I manage to lob something through and gross y'all out. That said, I'd LOVE to cross-reference these results with what percentage of you dainty dainty princesses are also seat-hoverers and/or foot-flushers in public restrooms (and who then, of course, refuse to wipe up the seat afterwards lest your hand possibly come in contact -- even through seven feet of balled-up toilet paper -- with a single drop of urine that IS NOT YOURS OMG). Because...yeah, I don't move the seat most of the time. We have two of them -- one in "Noah's" bathroom upstairs and then one in our sole community bathroom on the first floor, and I used to move it, but...eh. I keep disinfecting wipes... Read more → 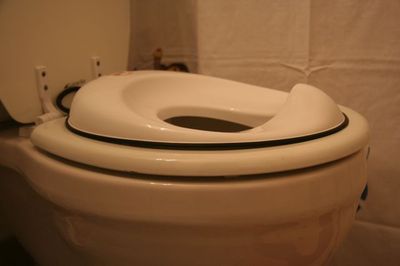 (Because I continue to be endlessly fascinated with other people's bathroom habits.) This one's easy. Just one question. The toddler potty seat. Move it or sit on it? Personally, I've taken to calling it the iPhone Blocker 3000. Read more →

Now Imagine 10 Years of This, People

"So, I can't remember. Are we getting each other anniversary gifts next week or not?" "Eh." "Yeah, exactly." "We'll do dinner, night in a hotel...that's probably all we can swing right now." "Besides, I'd rather get a Push Present." "Ha! Yes, that." "Although...I won't technically be pushing." "True! No gift for you!" "What about a Slice-Me Dice-Me Present?" "Hmm." "A Major Abdominal Surgery Award?" "I see what you did there." "A Gutted-Like-A-Fish Gift?" "Uh-huh." "A Congratulations-On-Not-Bleeding-To-Death Present?" "Okay, you're done now." Read more →