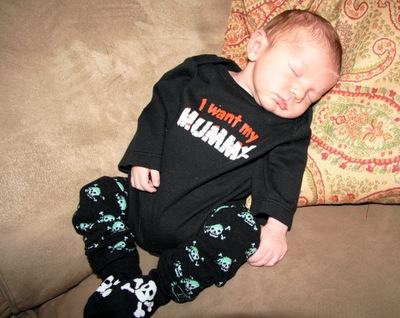 So my weblog stats inform me that this is my 1,000th post. Or more accurately, the 1,000th post as the archives stand today, not counting the many entries I've gone back and bahbleeted out of 1) shame, 2) post-chill-pill-calming-the-fuck-down, and 3) omg, I was like, sooo totally drunk. Kind of a shame that the 1,000th post now falls on Halloween, when I am obligated to post nothing more substantial than CUTE WIDDLE BAYBEES IN COSTUMES NOM NOM. Number Two on your Halloween Threatdown: PIRATE MUMMIES! Number One on the Halloween Threatdown remains, as ever, BEARS. NOT FEATURED in this year's Threatdown: mothers who only give enough of a shit to pull an orange-ish sweater from the bottom of the laundry hamper before attending their son's school party, trying to hide the fact that she outsourced her ONE JOB of providing enough paper plates and utensils for 15 three-year-olds to her husband, who originally came home with 60 plates, no utensils and one package of giant black Solo "no officer, we're just drinking grape juice over here"-style cups. *** Oh, Noah. I originally ordered him a Dash-from-Da-Increbulls costume. I was quite pleased with myself. The Incredibles! He's going to be SO... Read more → 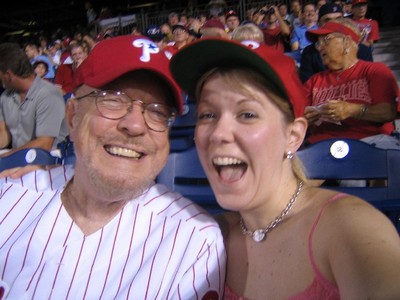 First of all, my dad is home from the hospital, and also, GO PHILS! *** Thank you so much for all the "Noah = hideous, yet NORMAL" comments yesterday. If one could physically cling to hope via Internet Comments, I'd be that scrawny kid in gym class stuck halfway up the rope climb. After I posted, we left to pick Noah up from preschool. He seemed like he was in a good mood, like we still had some time before the Wall of Nap, and we were out of diapers, so we decided EVER SO UNWISELY to go stroller shopping. I hate the Big Box Baby Stores as much as anybody, but today marks the first time I ever left one sobbing. I would consider the fact that we got out alive and with two packages of newborn diapers (SIZE ONES. I BOUGHT NOTHING BUT GIGANTIC SIZE ONES.) to mean the trip was a success, but once we got home I realized we're also out of Pull-Ups, and I promised to bring plates and utensils to the school's Halloween party on Friday, so I have to go out -- outSIDE. outSIDE of my HOUSE. -- again. Plus, you know, the... Read more → 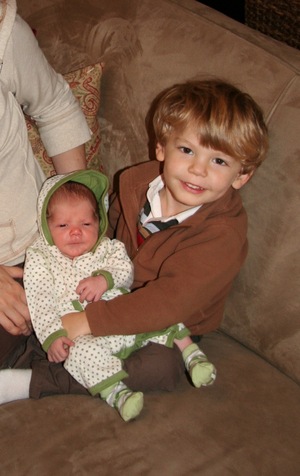 My dad is back in the hospital. On Monday night he had a coughing fit while taking his medication (nothing super out of the ordinary -- he chokes very easily since losing his larynx to cancer) and aspirated a pill into his lung. He's now being treated for aspiration pneumonia. The good news is that he appears to be responding very well to the treatment and we're hoping he'll come home today. My parents got to "see" the baby via webcam a few hours before the accident, and I spoke with him on the phone yesterday and as always, he sounds great. *** We're all sick too, although in a much less dramatic pneumonia-ish way. Noah came down with a bad, baaaaad cold last week -- he woke up wheezing on Thursday, and because Daddy was home scored himself a trip to the DOCTOR, where Daddy was told that it was indeed just a bad, baaaaaad cold. As we all know, Mama would never have taken him to the doctor, but would have instead smeared some Vaseline on his chest and called it a day. *** I did take Ezra to the doctor yesterday, obviously because he's new and shiny... Read more → 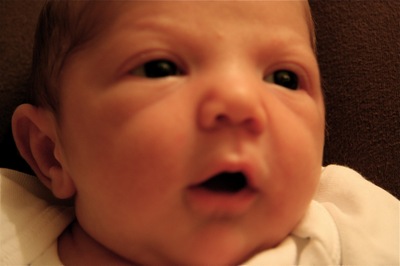 Ezra is a good baby. He cries when he is hungry (a sweet, braying, lamb-ish sort of cry), when he wants to be held (which is pretty much all the time, thank God for the half a dozen or so slings I purchased in string of neurotic fits, although he'd probably be just as happy slung around my torso in a Thomas the Tank Engine bedsheet), and when he's naked on his back during diaper changes with his limbs madly flailing wot wot halp halp mayday MAYDAY! He spends more and more time each day in a state of quiet, awestruck alert, looking around with his eyes wide, the corners of his mouth just starting to dance around the idea of a smile, giving us a peek at what we think might be some dimples. He eats every two hours during the day -- a frustrating bit of math, as he takes at least a half hour to eat, then it's 10 minutes of pumping, a diaper change, a new outfit, a scrubbing of the pump parts, maybe time to pee and retrieve my cup of room temperature coffee from wherever I left it, and then...huh. Time to nurse again.... Read more → 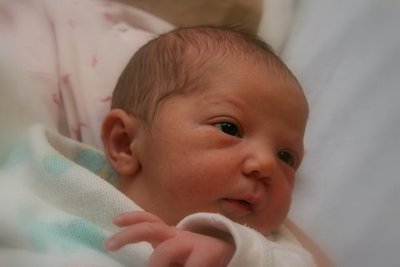 I first noticed Ezra's tongue-tie the morning after he was born. Something increasingly felt "off" in his otherwise picture-perfect, open-wide baby-bird-mouth latch, I'd yet to see his tongue protrude past his lower lip, and when it did, it looked exactly like the top of a heart. I immediately started looking for someone capable-looking to snip that sucker back, but after a few dozen more increasingly painful latches I was ready to hand my baby off to anybody with a pair of scissors. You there! Orderly! Wanna make a few bucks? Go sterilize your car keys. So by yesterday afternoon, when I FINALLY had an appointment with a pediatric surgeon, I had no patience for the millionth assurance that a frenectomy was no big deal, that it was better to get this taken care of now rather than later, that it would only hurt him for a split second or two. I briefly wondered if I came across as heartless, and if the proper response to being officially told that yes, Ezra most definitely needed his frenulum separated was possibly not what I said, which was: GIDDY UP. The surgeon asked me to leave the room during the procedure and go... Read more →

nOT yET Mastering teh 0ne-handed Typing Thing 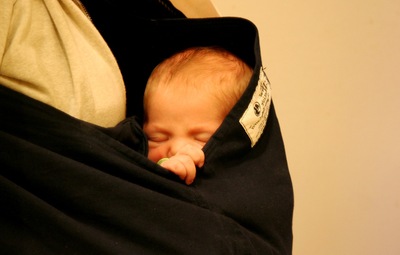 Baby may be cross between vampire and those newly hatched velociraptors from Jurassic Park, what with the FEEDING and FEEDING and rarrrry little squawks and howls. I sometimes stick my face in front of his during the frantic rooting, because it amuses me when he attempts to latch on to my nose. *** Yeah. So I typed those two sentences awhile ago. Three days, two days, something like that. It's time to admit that entries involving "words" may still be beyond me at this point. You guys like pictures, right? (Photos ahoy after the jump, so you won't want to kill me over the slow load times.) A few more from the hospital stay: Two hours old, or so. Last night, on our first family pizza outing, which was my idea, wheeee percocet!: And today. One week old: (TURTLE!) PS Things are great. We are great. Breastfeeding (!!!) is great. Still just all around disgustingly happy and great. Seriously could be talked into having a dozen more babies right now, because I am genuinely loving every second of this. Jason is "home" but stuck finishing up one last important project for work that he couldn't delegate to a coworker so... Read more → 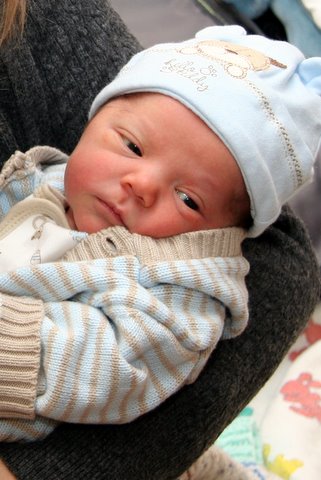 Duuuudes. WTF day is it? Childbirth brain ate words not forming so good also boobs. Booobs! Dude. Etc. Ezra Harrington Storch was discharged from the hospital Saturday morning, weighing in at a rather puny six pounds, 12 ounces. He was put on a strict regimen of Moar Boobage. Expectations were low, as the boobs in question are known for their losing record in past seasons. Young Storch is also having problems with his frenulum (AKA that stretchy bit of uselessness under the tongue), a condition his mother first started pointing out to people on Thursday morning, but oh, do you think anyone listened to her? Do you think she ever got the visit from a lactation consultant she requested over and over and OVER? Do you think it was at all helpful when the LC showed up AS WE WERE WALKING OUT THE DOOR POST-DISCHARGE to announce that hey! This baby is tongue-tied! How about that? I bet your boobs are KILLING YOU. Do you think maybe someone is still just a tad annoyed by this, a little bit? However, the teeth were gritted and the milks came in and the Soothie gel pads were applied and GODDAMN, this kid... Read more →

Please give me a sec to catch my breath 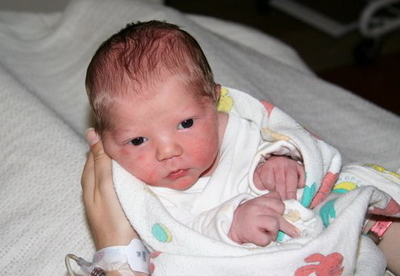 Oh, this boy. So many things to write to about, but I can't keep my hands off of him long enough to type a single one. Suffice to say: we're all fine, though stuck at the hospital for a couple more days, Ezra is perfect and perfectly healthy (and surprisingly patient about his lack of a middle name), although his size (HIS SIZE!) makes him an entirely different species of newborn than what we're used to. We've probably said, "He's SO SMALL!" about four bazillion times already, and are hoarding the hospital newborn-sized diapers like nobody's business, because ha haaaa! Weren't we so smart to not buy anything newborn-sized this time? Oh, but we are such experts. Which is also why I needed to be reminded after 12 hours or so that I'm supposed to burp the baby after feeding. Right! That! So far Ezra loves 1) boobs and 2) sleeping. I'm...in a good amount of pain. It's like I had major abdominal surgery yesterday, or something. Noah was initially unimpressed, but seems to be coming around. In summary, we're good. So really very much just tons of good. Read more → 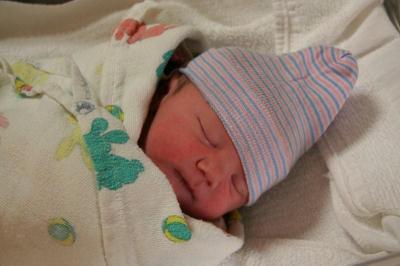 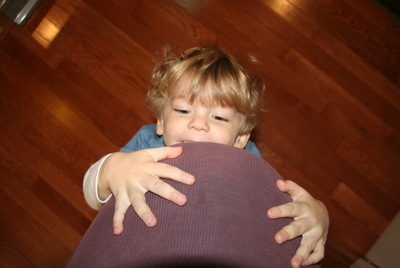 Or, I Feel the Urge To Wave a Big Flag Around a Rotating Stage In Front of a Barricade While Singing a Seven-Part Musical Montage Or Or, AAAAAEEEEEEEEEEEIIIIIIIIIIIIIIIIIIIIIIIIIIIII Today marks the second of my five or so hypothetical due dates, and the one I secretly thought was the right one. We have no mucus plug or water breakage or contractions worth even talking about. So. That's probably that. My in-laws are coming today, I will head to the hospital for pre-op bloodwork, I will play Legos with Noah, Jason and I will go out for one last dinner together and I will try very hard to not freak out about the fact that by tomorrow afternoon I will be the mother of TWO CHILDREN. TWO BOYS. A few years ago I assumed I would maybe have one child. A girl, of course, because boys are ew. Noah seems to understand that tomorrow is Baby Brother Day, but then again, he also seems to understand that yes, We Wear Pants And Pants Are Good, but that doesn't stop him from collapsing in a pile of misery when it's time to actually wear pants. Not pants! Nooo! Oh, woe. I think he'll... Read more →