Smile With Your Eyes

I planned to end this horrible, no-good, ignorant slut of a week with some photos of Ezra smiling -- and then I planned to send those photos off for an independent, third-party evaluation that I am confident will definitely prove that his smiles are very seriously the greatest smiles ever witnessed in a human being -- but of course he will only smile at ME, and not the CAMERA, and in fact the presence of the camera immediately makes him all SERIOUS BABY IS SERIOUS, and then I replace the lens cap and he's all HA HA smiling with his whole head again. And now today he has a cold in his eyeball. Because of course he does. And now even the off-camera smiles are tinged with about five shades of pathetic and two kinds of eye goop. Which: yeah, he's cute as hell, but ew. So instead, I present: SERIOUS BABY AND HIS THUMB. I find his struggle to be both inspiring and oddly satisfying. He finally gets that thumb extricated from his fist and in his mouth and man, there's a metaphor for the human condition in there somewhere, but I think I'll just promise myself to get... Read more →

Sad. But Not, You Know, Saaaaad.

We're snowed in (well, more like ice-and-slushed in at this point), we're slowly on the illness mend, and the news from the hospital is neither particularly good nor particularly dire. (They're...shocking his heart? because it's still beating irregularly? and he's at high risk for a stroke and the pneumonia has taken a turn for the even worse? and while this sounds terribly awful they seem rather nonchalant about the whole thing?) (Also: they! I shake my fist at you, they!). It's always just a matter of time, I've found, if I post a few complain-y, overwhelm-y entries, before the suggestion is made that I am depressed and should call a doctor and consider some meds. Which always makes me toss up my hands and wonder when it suddenly became impossible for someone to just be SAD when things are not going especially spectacularly? Can't anyone just be SAD anymore? But that's not really fair, since I know people really do mean well, and when all you have to go on is that series of complain-y entries, you might assume I really AM doing nothing but wallowing in my nice bowl of sadness soup. (Mmmm. Soup.) I assure you that I... Read more →

Dad Update: His left lung, the one that collapsed, has been drained of fluid and...uh...reinflated? uncollapsed? You know. Whatever the proper technical term for WE DONE FIXED IT is. But! Now he has pneumonia in the right lung, and is hallucinating from a lack of oxygen to his brain. And not fun hallucinations that we can tease him about later. Scary dreary hallucinations about death that are making my mom cry and me stress-eat the hell out of a pan of brownies. AND THEN there are a couple heart-related things that I cannot spell but we are assured are at least somewhere in the realm of "normal" complications. So...yay for that? Noah Update: Despite waiting for almost two months for yesterday's evaluation appointment, I sincerely wished I could have rescheduled. Y'all know what the past few months have been like, health-wise, over here, with the colds and sinus infections and ear infections and ear infections LEAKING OUT OF OUR EYEBALLS. So you know that I know Sick. I am an expert at Sick. And yesterday I was indeed at the level of Sick where I shouldn't have been anywhere except my bed, researching the same damn breastfeeding websites, hoping for... Read more →

Done But Not Over

The breaks. We cannot has them. Since I posted on Friday, things went from Fine to Not Fine. "Kaflooey," is my mom's technical term for it. My dad's lung collapsed, his blood sugar went through the roof, he developed an arrhythmia and most likely pneumonia. He's had his lung drained of fluid and several panic attacks because he simply can't breathe. He's been on and off oxygen treatments for days, constantly dancing around the edge of ventilator territory -- improving a little but not quite enough, remaining solidly in the high-level cardiac care unit, which we keep telling him is actually a million-dollar spa getaway when the nurse comes to thump away on his back. I'm sure his insurance company would find us HYSTERICAL. On the other end of the whining spectrum, I woke up on Sunday with another cold. Meaning I could do nothing more for my dad than miserably wave at him from the doorway while covering my mouth and nose, and could do nothing more for my mom than drape myself over the chairs in the waiting room and pretend that I was still awake. My body just plumb gave out, so I came home. And yet... Read more → 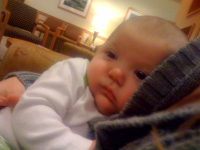 The surgery is over. It ended up being a triple bypass, and everything looks good and went fine and there are cheerful handsome doctors making all kinds of happy nodding faces. I saw him for a minute post-op and kissed his head and held his hand, and that was nice but all the tubes and breathing machines and beeping things were maybe a little too *real* for my squeamish ass. Then I changed a poopy baby diaper that went all the way up to the neck, if you know what I mean. That, oddly enough, did not squick me out in the slightest. Then I ate a donut. That about brings y'all up to speed. PS. My mom says to tell you that she thinks you are all wonderful, lovely people. Don't worry, I won't tell her otherwise. PPS. Ha! I was kidding, right there. PPPS. God, I'm tired. Read more →

He's in surgery now. We're waiting. Ezra is here and being the best baby ever, as usual. Fish tank! Fish tank! Nurses! Whoo! We're good. We're optimistic and okay. Except for the Rachel Ray Show on the TV here in the waiting room, which is making me want to punch something. I think I shall punch this gigantic blueberry muffin. Right after I eat it. The hospital's wifi flags both Facebook and Twitter as inappropriate. Too many doctors trying to liveblog brain surgeries? So...I guess I will update my BLOG, like in the OLDEN DAYS, oh my GOD. It'll be a few more hours before we know anything. (For those of you waiting to hear more about the blueberry muffin, well, I'm sorry. Important updates only. I KNOW. It's downright medieval.) Read more → 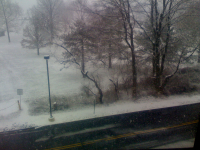 Out there. In here. Still here. (His bypass surgery is scheduled for Friday, so I'll be here for awhile longer, fighting the good fight for stray wifi signals and drinking WAY! TOO! MUCH! COFFEE! while Ez charms the scrubs off the nurses. Thank you for keeping us in your thoughts this week.) Read more →

All That Your Heart Can Take

On Friday, we got the results of my father's heart catheterization, which mostly confirmed what we already knew: there's a very bad blockage in there, a blockage has likely been there for awhile and likely caused his fall last summer and is definitely causing all of his current bouts of dizziness and breathlessness that have essentially kept him housebound for months now. Angioplasty or a stent or medication will not help. Bypass surgery is absolutely not an option because of his age and health and just...no. Quality of life, enjoy what you have, and all that. On Saturday, my mom called 911 after the third nitroglycerin failed to halt my dad's symptoms and he was admitted to the hospital. Today, they're meeting with the heart surgeon about the bypass surgery. My dad is resisting, and I can't blame him for that. For two years, they've told us the surgery could kill him. In two days, we've simply run out of other options. I'm loading up babies and pets and an indefinite number of days' worth of underwear. I never really know what I actually can DO when I rush up to visit at the first sign of a crisis, but... Read more →

(Previously: Part One and Part Two) Since we last left this...um...completely inexplicable series that even I'm not really sure what I'm going for here either, there have been several notable life changes for our deodorant friends. (Also, if you have to ask why I have so many different deodorants, you clearly underestimate how dedicated I get to completely insane gimmicks for my blog.) Degree Clinical Protection has put his macho bachelor days behind him and settled down with Degree Ultraclear and little Travel Size. Degree Clinical Protection would like you to know that it was a shotgun wedding, and that he still totally rocks the party. You know. When they can get a babysitter, and stuff. Secret Flawless, inspired by Lindsay Lohan and that Katy Perry song, which are testing like, way high with her demographic, has been hanging out with Secret Clinical Strength. Her Facebook status is currently set to "It's Complicated." Tom's of Maine is currently single. But he's optimistic! 2009 is going to be his year! The year the research on aluminum content in deodorant will definitely swing his way! Plus! He recently met Dove Clinical Protection in the candle aisle of the grocery co-op? And she's... Read more →

A NAP? TAKE A NAP YOU SAY? YOU SHOCK AND APPALL ME, MADAM. (Two new posts over at the Luvs site: Save It For the Internet, Lady and Things I Did Instead Of Writing Helpful Time-Saving Tips For You This Week.) (By the way, I really want to thank everybody who has clicked over and/or left a comment on my stuff over there. You've helped me earn a few more much-needed dollars. I'm also going to be doing some additional writing for Zero to Forty soon, which was by far the Most Fun Writing Gig Ever. And perhaps now it will be even more fun -- writing about pregnancy without, you know, having to actually be pregnant. WIN!) (And yes, I totally appreciate the irony of me coming here to post about how I don't actually have time to post here but look! Here's stuff I wrote for money. Delicious leafy money. I would like to eat it with some croutons and shaved Parmesan cheese.) (Here. Because I feel guilty now for being such a sell-out and all, I give you this unflattering photo of me, unshowered and completely free of makeup, sporting a big hickey on my cheek, courtesy... Read more →