Results of the Totally Not Really a Contest Fake Contest

So, because all these goddamn unicorns keep shitting on the floor and eating the drapes, Danielle, Chad, Cara, Baileyswedishfish, Dona, SueBee AND Jessi all win. I figured I didn't actually need to say anything, since everybody just stares at the baby photos anyway, and the captions could announce my intention to run for governor of the Outer Spacian Hinterlands of Pluto and the comments would still mostly be about nomming on Ezra's cheeks.

And of course, I do not blame you. He is incredibly nommable, and I haven't had anything original to say since 1992.

Honorable mentions go to Kim and die Frau for trying to find something noble in my intentions (i.e., focusing on my beautiful babies' smiles instead of being all neurotic and hand-wringy). You both win leprechauns.

(Speaking of hand-wringy, how awesome is it that right after I'm all, "my kid's expensive private preschool kicked him out of SOCCER!!!11!", I read this post at Sweet Juniper about the Detroit Public Schools failing children in a very profound and fundamental way, on a massive scale, and it makes me twitchy and angry and heartsick and grateful, and if you haven't read it [and the postscript] you should. It will haunt you.)

(Personally, I had no idea that haunting weblog ghosts could physically wallop you with a two-by-four while screaming, "PERSPECTIVE, BITCH!" Turns out they totally can!) 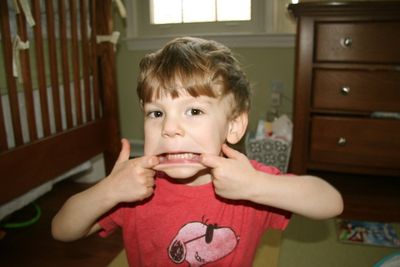 An outtake from yesterday. We'll call this one goofen shadesofthefutureblah.

heading over to read the article now!

ahh Noah, he is too fun! so cute

Cute picture! I love these sorts of photographs, they really capture a child's personality =) And goofiness.

I can't believe how big Noah is getting! He's so adorable!

Just hafta comment on the baby's Fuzzi Bunz. We used these for both boys (my oldest is about Noah's age) and now for our 18 mos old. They rock! Expensive at first, but man, totally worth it. We used these on TWO babies (well #2 is still using them) and once we are done with them, I plan to hand them down to the next person who wants to use clothe. Not your mother's clothe diapers anymore!

I cried like a big pyschotic baby when I read the Sweet Juniper post. How can that happen!?! It's just amazing what a little corruption can do in this world.

Why are the outtakes always my favorite? CUTE!!

I looked up the diaper website - it's www.clothdiaper.com - err, pretty obvious, I'm not sure why I "forgot" it, LOL. I got one of the prefold packages, not sure which, one of the more comprehensive ones from newborn to 30 lbs. Oh, and I got the covers with the velcro, not the snaps (important).

Obviously, supercheap has to be interpreted in diaper terms -when you're talking $20-30 PER DIAPER then a couple of hundred bucks for a package is an awesome deal.(Also, I live in Canada, so things are a bit more expensive for me, even through Canadian websites. This website even though it is a US site, was still the best deal I could find)

I think I read this blog a bit too obsessively - I think it's called work avoidance!

Sweet Juniper gives all of us perspective ... that town seems in total disarray. Your kids are SO cute. :)

I think Noah should be in shampoo commercials I love his hair. Huh Amy you said something?

Forgive me if this is already common knowledge and I missed out on it... but what's the status with Noah's preschool? Is he staying there? Have they gotten better? Did they ever apologize for kicking him out?

Going to check out that article now...

@jessi -- I bawled, too! For so many reasons ... Thanks for pointing the way to that one, Amalah. The pictures are horrifying. And haunting. I'm not going to forget about Detroit public schools any time soon.

Is my unicorn crate trained or do I need a fenced yard for it?

Also, it won't root around in the cat box like my golden retrievers do, will it?

Can I play ring toss with chocolate donuts on its horn?

And I love your outtake photo. My, that boy looks like you! :)

Dude, I feel like a friggin' CELEBRITY. You just made my weekend. Thanks!

Now I guess I should go read Sweet Juniper's post, though I'm loath to do so. This is why we moved to the 'burbs.

The pictures of the trashed school point to one big problem - the waste! We hear so much about waste and everyone thinks of $10,000 toilet seats and overpaid lower middle class public employees who don't have to go to work to get paid. Or teachers who make the princely sum of $50k with which to pay tns of thousands back in student loans and to make payments on their quarter million dollar condos. Imagaine!

But what about the amount of money that goes to things that get trashed that didn't have to.

And while I'm at it, I'm also sick of reading magazine and newspaper articles showcasing multimillion dollar mansions with opulent fixtures procured from public buildings for tiny sums - 5000 sq ft of 2" thick marble flooring from South Station in Boston gotten for pennies. Dozens of lovely oak library tables procured by an Oakland CA antique dealer for $5. each now being sold for $1800. a pop, mansions delivered from Amhearst College to a builder for $100 each that are now being sold - before renovation - for $400K. And these are the ones we hear about. This is what happens when you privatize everything people! Imagine what could have been done for our kids if these wealthy people had to pay a fair sum for these things. Imagine what could have been done for the children of Detroit if all these materials were not simply cast aside.

Thanks - this has been bothering me for a while and I saw a very minimal opening here.

yay for cloth diapers. may i suggest http://www.moderndiapers.com/ for your new sickness? it's a total addiction. i cannot even begin to explain my love of cloth diapers. totally addicted. to diapers?! strange, but true.

Thank you Amalah for posting the link to Sweet Juniper. I live about 15 minutes outside of Detroit and have lived in SE Michigan all my life. I've only ever known urban decay and I think this country doesn't realize the rot that is happening here. Detroit's people and children especially need to be seen and heard!

How has this not been better publicized??!!??!!

Thank you - I needed a little perspective myself.

And thank you for the Noah outtake - he is just so bloody cute!!

Tell Noah that he scared me half to death here! I nearly fainted with such a scary face!hahahahahaha
Get serious, this boy is too cute for words!

And that pic of Noah...omg too cute!

So where do I pick up my unicorn?

re: the Sweet Juniper link -- that is horrible -- the student records that were still in the school.

This totally means nothing, but if it's ANY consolation, I'm scared to death of sending my kid to school (still many years away) because seriously? School FAIL on so many levels. I so can't homeschool though. My kid is doomed.

In that picture, he kind of reminds me of Jack Skellington scaring Boogie's boys in the Nightmare Before Christmas because they won't stop fighting. In fact, I am pretty sure it's the exact same facial expression.

Wow....speechless...what a horrible waste. And those kids, with thier records strewn about - their worst nightmares exposed for anyone to see or use in some awful way...there are no words.

It's weird. On the last post I can finally see Jason in Noah's face... And now Ezra looks like your little clone. That is disgustingly cute!

The thought of all those private records being left for anybody to read makes me So. Happy. To be homeschooling. Because my kid isn't on paper anywhere (except maybe the doctor's office) and he doesn't have an IEP anywhere for somebody to find and fling in his face later on in life. WHEW.

hooray for cloth. (i'm posting here because the other post's comments were closed.) our daytime stash is mostly muttaqin baby fitteds (we love the 3srs) and goodmamas (many of which we bought used in excellent condition---they are verrrry pricy). we use thirsties covers over these. at nighttime we use rumparooz one-size stuffed like ... i want to compare it to something foody, but, that seems not right. anyway we use one of the cotton babies or banana peels diapers microfiber inserts, the kind that are one-size and have a snap-down system. this creates an extra layer at the front of the diaper. sometimes we add a hemp insert or a microfiber doubler, too. it looks kind of ridiculous but it gets her through the night, mostly.

i know a lot of people still use disposables at night but so far we haven't needed to.

congrats & may the force be with you. who'd've thought that cloth diapers would be my worst shopping addiction yet.

Oooh! I win? Thank you! I've always wanted a unicorn, from waaaaaay back in my pink-and-white glitter transfer t-shirt days!

Good think I just moved in to a new house. I know the perfect place to keep him...wheeee!

On a somber note, something similar to this happened not too long ago here in Birmingham when several city schools were closed. It's just shocking and oh so sad.

OMG! Those pics of Ezra are so amazingly cute - my husband walked in and said "Who is that?" and I said "That's Ezra, isn't he adorable?" and he replied "He looks like a roll of baker's dough." ROFL!

Dude! I just saw you on THROWDOWN! and I sat here and babbled at my husband, "OH, I KNOW HER!" and he gave me that look so I amended it to "Well, I read her blog!" and he pretended to be impressed.
And now I'm rounding out my evening of dorkitude but commenting about you being on mah teevee, as though you don't know you were on that show or something. I am so cool.

Hey, just wanted to tell you I saw you on tv last night. Your episode of Throwdown with Bobby Flay was on. Gotta say, those mussels looked delicious!

Totally off topic, but your "showdown" episode was on again last night. I saw you and screamed "I know her", then of course the hubby wanted to know how, which made me look like a huge loser when I had to explain that I don't actually *know* you. Anyway! You looked so cute!

Oops, showdown/throwdown, whatever I was close! And I'm glad I'm not the only one who doesn't *know* you and looked silly last night (this is what I get for not reading all comments first).