Home Archives About Subscribe Advice Smackdown Tip Jar
Oy
Because the world should stop, just for a moment or two

Well. So. Despite the weirdest trip to New York ever and a brief detour into FOOD POISONING*, I am back at home, finally. What's this thing, here, on my lap? A com...pooter? Internetty? Blawgs? Twitter? Facebook? Twitface? What the fuck? 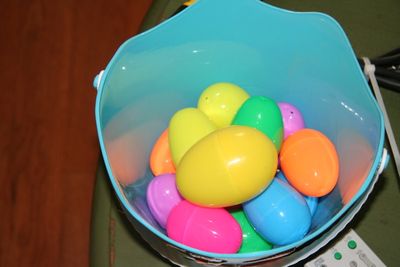 Noah's Easter egg hunt this morning consisted of a dozen plastic eggs filled with pennies and leftover Halloween candy. I am pretty sure this might be a new record in half-assing. 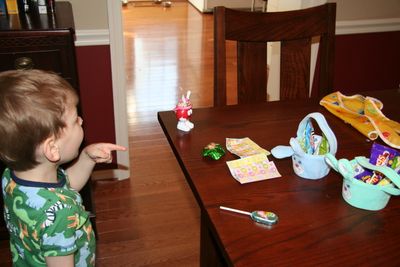 Big shout-out to my sister, who so nicely provided little Easter baskets for both of my children, without which my children would have received NO Easter baskets, because you know what you get when you go to Target the day before Easter in hopes of stocking an Easter basket? You get empty shelves and some irregular bunny cupcake mix. Possibly some Christmas tinsel.

I did eat both of the Cadbury Creme Eggs from the baskets, though. I had to. Those things are terrible for children. 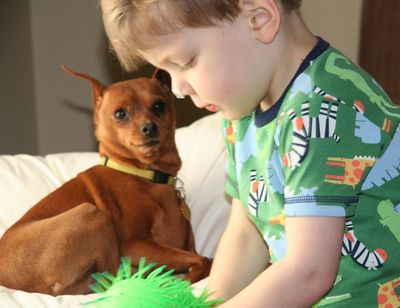 Noah has been wearing an Easter sticker on his nose all day. I don't know why. It's like his parents let him eat chocolate lollipops for breakfast, or something. Ezra did not get any chocolate, but he did wake up with a whole other tooth. So that's also something. Something straight from the bowels of HELL, that is. But still, something.

And now, a Ball Poppers Are Serious Business Interlude: 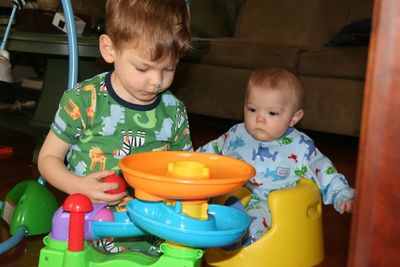 The It's Past Noon But We're Still In Our Jammies Brain Trust begins the experiment. 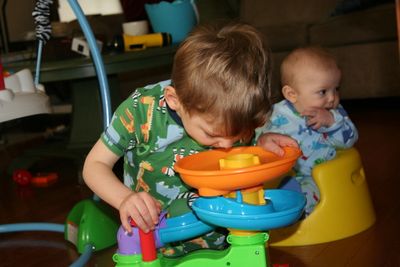 One's an engineer in the making, while the other has spotted his reflection in the TV cabinet. 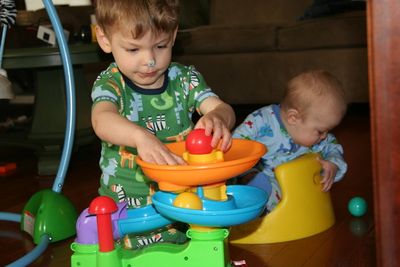 Claire hated the ball popper with a passion. She's her mama's daughter, apparently, since she also hates the creepy-ass clown in the jack-in-the-box.

Happy Easter, welcome home, and I hope you're dad is doing well!

Happy Easter, welcome home, and I hope your dad is doing well.

Returning to a reliable source of Liquid Emotional Crutchery is always a relief, I agree. And if this young pair get any more NomNomNom-able, I shall... I shall... I dont actually know what I shall, but keep posting the photos, 'kay?!

The dog seems to think the nose sticker is... bad?

"It's Past Noon But We're Still In Our Jammies Brain Trust" HAHAHAHAHA. Only you can make a post that starts with something as sucky as food poisoning end up making me laugh. Yay for Easter baskets, Easter stickers, Ball Poppers and new teeth!

Ahh Easter. Thanks for blogging! :)

I miss back when my extended family all got together for Easter. At the hunt there was always a REALLY hard find to egg that had a hundred dollar bill in it. And of course, one of the teenagers always found it first, dammit. They stopped doing that by the time I got smart.

"It's Past Noon But We're Still In Our Jammies Brain Trust"...so the brain trust is spreading. We regularly have meetings of this brain trust at my house.

Looks like you had a great Easter. I was also at Target yesterday trying to get three Easter baskets to replace the plush atrocities that they acquired a few years ago, on clearance a few days after Easter. We ended up with plastic Easter buckets from the grocery store, still an improvement.

And I have to say that pennies and Halloween candy sound like a good idea to me; I'm sick of shelling out money for candy only to tell them no, they can't eat it all for breakfast, then having my husband take it to work. They'd be thrilled with pennies and chocolate Santas; I could just explain that the Easter Bunny needed a vacation so Santa covered both holidays this year.

I love and hate that damned ball popper. We have one at the open gym we go to and I've never gotten one for my house because I'm so scared of chasing those damned balls around the house. Don't feel bad, I totally skipped the easter baskets myself. My older one doesn't even know it's Easter and my younger one is too young so ... I'm waiting until someone cares to do it!

All the balls for our ball popper are under the sofa...where they will remain ad infinitum.

And hooray for wine!

Pennies rock. We were digging around at midnight because we couldn't even come up with a dozen. Easter bunny brought nickles, out of desperation, which my son thought we QUARTERS! Whee! Easter bunny is kind of a cheap bastard.

My little one got her first Easter basket today and then tried to raid her cousins', so greedy.
Happy Easter!

We have the ball popper. The kids love it, but I HATE having to retrieve the balls. Our oldest is 2 1/2 and he can go get them now, but still too much parent involvement! :-)
I used to set up the IKEA tent my son has and put it in there so the balls wouldn't escape as easily but it didn't work so well, since the tent doesn't have a door that closes.

Pennies and Halloween candy sounds pretty darn good to me. Better than what I did... run out after 10 the night before and not pay attention to the prices because there was squat on the shelves and end up spending $50 on 2 kids!

And... Stay in your jammies as long as you want! We call those "jammie day's" and have them anytime mommy needs one!

AND- I really hope your family is doing alright.

Those boys are more delicious than chocolate, that's fer sure.

Mr. StickerNose is precious. Precious, I tell you!

I love the Bumbo chairs! We had a red one for our toddler and she loved it! (The Easter Bunny didn't hide eggs at our house--he hid them at MIL's house instead. Yup, I'm lazy.)

Oooh, I was looking at that ball popper toy and thinking about getting one. It looked like fun. For the baby, I mean. Heh.

Dude...don't feel bad. We skipped Easter entirely this year...on purpose. I just coulding get up the energy to give one bunny turd about it.

And then halfway through the day I suddenly had a panic attack about the kid realizing that we skipped holidays and felt all guilty. So I let her dye exactly 2 eggs and took a ton of photos for evidence.

I'm glad you did your part for protecting our children by eating the Cadbury Creme Eggs. That was a pretty big sacrifice. I myself made a similar sacrifice, but since we don't have kids, I was protecting the cat and my husband.

It's amazing what women will do in the name of selfless love.

Hey, at least you didn't let them eat the tinsel. I call that a win.

Dude. At least you had an Easter egg hunt. Ours--planned to be held at the inlaws' house--was postponed on account of illness, a two year old with a fever who refused to sleep AT ALL in the hotel room, and a very tired momma. We came the frak home, OD'd on TV, baked a ham and promised the kids that when everybody was healthy we'd hunt eggs on a sunny day this week. Eventually.

My God. Your kids are so cute. So cute! Good job on that.

I suck at life and living it, and spaced on the whole "easter basket" thing. Luckily my dad still buys his kids easter baskets, so I could just give Gabriel mine and pretend. Not before I ate the good chocolate though.

Easter day they stay in their jammies all day, natch, but today is the day AFTER Easter and my kids are all still in jammies, closing in on lunch. Even though I keep yelling from the computer "Kids, get dressed!" which I'm realizing might be a TAD more effective if I wasn't still in MY pajamas as well.

My son hated that ball popper. Scared the crap out of him!!

I bet the plastic eggs with halloween candy were still a hit! obviously the easter sticker was! glad it was a good weekend, minus the food poisoning thing!

I know you said that the Storch is strong with Ezra (which cracked me up) but I can't help myself: I think in more and more photos he looks just like you and as Noah gets older, he looks more like his Dad.

But what do I know? I still can't figure out who in the heck my daughter looks like.

Oh no, Ma'am. You don't get to claim the half-assing title without a fight. My fought over kids finding a total of 8 plastic eggs (all of which were leftovers from #2's school party). Six of the eggs were filled with leftover party candy, opened jelly beans, and foreign money from my mother's European vacation. The other two had notes from EB himself daring the dudes to find their Easter Baskets, which were later discovered in the trunk of Mommy's car were they miraculously landed while I was at work (and, yes, I worked Easter b/c hospitals strangely are not closed). But, next year we can make a vow to do a better job and if nothing else, we get off scott free since they blame the EB for it all.

I agree re: sticker nose..CUTE! I love the way kids can just walk around with a sticker on their face and be so adorably oblivious (or maybe he wasn't).Either way: cute.

Reading this post made me feel better about my complete FAIL at Easter. Morning of- threw product review candy into last year's baskets with nowhere near enough of that plastic grass, so the candy sort of sunk to the bottom. Realized we had no plastic eggs, ran to Walgreen's. Came home, got busy around the house, forgot to put candy into eggs. Bought stuff to dye hardboiled eggs, didn't do it.

I suck at Easter.

Heh heh. We loved the ball popper at my house, was so glad when I gave that one to the neighbor.

Second pic, Ezra is all watching for the cops.

I did OK at the Easter stuff, but for the eggs I was required to bring to the daycare Easter egg hunt, I totally smoked your half-assedness.

I bought stuff to put in the eggs, but I got the wrong sized eggs, so they didn't fit. In replacement, I collected all the free stickers sent to me by the Disabled American Veterans, the Army Reserve Deployment family pack, Cookie Magazine, St. Jude's Children's Hospital, and Hallmark, and stuffed those into the eggs with a Hershey's kiss from Christmas. But I ran out of kisses from Christmas and put in the ones that have been sitting in the container since 2006.

I was going to leave my own comment on this post, but then my daughter saw the pictures and asked who those boys were. She then told me that Noah was her friend and "Hey! He wears stickers on his face like me! I should play with him sometime."

Now I have nothing to say that trumps that. So, Cambry says hi to Noah.