And Then I Threw Up. The End.

So I went to New York City on Thursday. You know, just the random sort of glamorous day trip that is so typical of me and my fabulous jet set lifestyle. Or train set lifestyle, I guess, since I took NJ Transit, and probably had a Thomas and Percy floating around in the bottom of my bag. And I made the train on time and did not get off at Newark by accident and it was all fabulously boring, though I like to think that the baby strapped to my chest in an Ergo carrier paired with high-heeled boots and a ridiculously overstuffed diaper bag added a little bit of intrigue. Will she fall down? Get stuck in a sidewalk grate? Leave behind a trail of wadded-up bumGenius diapers* all over the East Side? DUN DUN DUUUUN. The Whole Point of the trip was an extension of the Hewlett Packard Moms for Simplicity ad campaign that you are probably currently using an ad blocker on, and was supposed to be about moms momming around and using the latest in mom technology to make their momming easier and simpler and 75% more mommier. This included meeting Olympic champion swimmer (AND MOM!)... Read more →

Because the world should stop, just for a moment or two

I've been working on a post all day. A sentence here, a sentence there, half a sentence interrupted by someone who needs something and the perfect punchline ruined by an inexplicably truncated nap and whoo boy, I would probably make one hell of a prolific mommyblogger if it weren't for all these damn meddling KIDS. But. Then. I cannot stop thinking about baby Maddie and now, oh no, not more, not again, baby Thalon and my hands pull away from the keyboard and wrap themselves around my baby's fat little body instead, my strong, solid, healthy little boy who is drooling all over my arm -- he of course prefers my arm over the dozens of toys and rattles and lovies I've tried to tempt with today -- and I try not to imagine all the ways things can all fall apart, all the unhappy endings and missed miracles and the idea that your own heart will just stupidly KEEP BEATING even after your baby's stops and OH YEAH, let me get right back to working on a post about some dumb thing I said or did because oh, that Amalah! What has she gotten herself into now? It feels... Read more →

Well. So. Despite the weirdest trip to New York ever and a brief detour into FOOD POISONING*, I am back at home, finally. What's this thing, here, on my lap? A com...pooter? Internetty? Blawgs? Twitter? Facebook? Twitface? What the fuck? Noah's Easter egg hunt this morning consisted of a dozen plastic eggs filled with pennies and leftover Halloween candy. I am pretty sure this might be a new record in half-assing. Big shout-out to my sister, who so nicely provided little Easter baskets for both of my children, without which my children would have received NO Easter baskets, because you know what you get when you go to Target the day before Easter in hopes of stocking an Easter basket? You get empty shelves and some irregular bunny cupcake mix. Possibly some Christmas tinsel. I did eat both of the Cadbury Creme Eggs from the baskets, though. I had to. Those things are terrible for children. Noah has been wearing an Easter sticker on his nose all day. I don't know why. It's like his parents let him eat chocolate lollipops for breakfast, or something. Ezra did not get any chocolate, but he did wake up with a whole other... Read more → 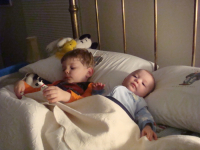 Oh, God. I seriously just typed, "Hi, we're all still alive" without thinking about it, because I wonder if some of you are expecting someone to NOT still be alive, which is like, heavy and bleak and depressing, especially since we are all MOST EMPHATICALLY ALL STILL ALIVE. In fact, as evidence for the "I am perhaps made of magic after all" theory, I think my father has improved dramatically since I got here on Monday night, when he was thin and frail and shaking and I honestly didn't recognize the little old man wearing my dad's glasses. Then I made spaghetti and meatballs and he ate two helpings and I figured out how to TiVo the Phillies game even though the guide wasn't showing that there even WAS a Phillies game (leave it to my dad, though, to still know exactly when the Phillies are playing despite being bedridden since January), and today I brought him a terribly unhealthy lunch of a bacon cheeseburger, like do I know how to help a cardiac patient or what, and he ate that too and played lots of peekaboo with Ezra and declared him "human cuteness personified," which is English professor speak... Read more →

On the Road Again

I'm loading up the boys and the suitcases and the crappy laptop and the car and trying to remember how to dismantle the damn Jumperoo lest I drive up to Philadelphia with it strapped merrily to the roof of my car, blaring Old MacDonald Had a Farm all the way up I-95. I'll be spending the week with my parents, and...gah. I don't know what to say about it anymore. It's...really, really bad, you guys. I would say more than that, but my mom reads and I don't think it will help anything to have it all spelled out here in black and white, and I'm guessing y'all can get the general idea of what's going on without me saying any more than that. Anyway, my mom mostly comes here to look at baby photos because they cheer her up. Therefore! Sitting! Sort of. Suspicious! Very. Ridiculous rattlely socks! Chompy. Sweet potatoes! Joyous. Two teeth nubs! Juicy. Big brother! Ignoring me. Rocket ship! Blast off! And other long-winded details re: plots of recent Little Einsteins episodes. Handsome! And oh, but I am doomed. I hope that helped, Mom, a little. I'll be there soon. We'll eat some brownies and have... Read more →

Funny thing about using this old laptop: I don't like using it, therefore I turn it off and put it down a lot. I wander away from it -- and the Internet -- in favor of shit like laundry or unloading the dishwasher or those-bananas-are-ripe-I-should-make-some-banana-bread-type whims. And while I doubt anybody is coming here to read about my super-extra-hot-damn-exciting life or anything, believe me when I tell you that WOW, this week has been boring. I've been boring. I've transcended boring. I've actually died of boredom and then risen from the dead to become boring's own personal messiah. Although last night Jason and I had a date night, and on the way home Jason was challenged to a fistfight on the Metro by a tweaked out meth head who thought it would be a good idea to start calling a fellow white dude the n-word and then scream I'M FIVE FOOT EIGHT, MOTHERFUCKER repeatedly until the next station stop, where Jason told him to get off and wait for him on the platform. "I'll be right there," he said. "And we'll go at it." The guy did, although his hopped-up excitement quickly turned to confusion as he watched the train... Read more →