A couple people inquired about the shoe box obstacle course I mentioned in yesterday's post. Yes, I was totally holding out on you. BEHOLD THE THRILLS: Seven -- count 'em! -- SEVEN entire whole shoe boxes of various cheap-to-middling-quality shoe brands, each filled with wonder, excitement...and ADVENTURE. Okay, more like "filled with cotton balls, dried beans, crumpled-up paper and packing peanuts." This is a motor planning activity from The Out-of-Sync Child Has Fun. The boxes can be filled with pretty much any textured material -- carpet, sand, buttons - and arranged in different ways, depending on your desired level of difficulty. End to end in a straight line (forcing your child to put one foot down in front of the other) is slightly tougher than spaced out and staggered. So to start, I've put them near a wall to help Noah keep his balance. (He's wearing his socks because otherwise he gets too preoccupied with picking beans and packing peanuts from the bottom of his feet.) After some practice, we try it using only one finger on the wall. And then... Ta-da! No hands! Hooray! Aaaaand. That's the shoe box obstacle course. Make one of your very own today! Mine... Read more →

I told Noah about the bus. A silly conversation to have with a kid who doesn't have the slightest grasp on the concept of time, but I told him anyway. "Next year, you'll ride the bus to school, and it will come right to our house!" I told him. He immediately ran to the window to wait. "Where the school bus, Mommy?" he asked, over and over. *** Ever since I attempted to explain why a featurette about Cruella De Vil from our 101 Dalmations DVD was not the actual movie, Noah thinks her name is actually "Bonus Material." *** When I ask him to go get something from another room, he walks to the door, spins around and points his finger out to me. "I'll be right back!" he assures me. He talks another step and spins around again, just in case I didn't believe him. "I'LL BE RIGHT BACK!" *** A baby was crying at Target. "Oh no, Baby Ezra's crying," Noah said. Before I could tell him that it was a different baby, he saw that Ezra was just fine. "It's okay, Mommy, it's not OUR Baby Ezra," he informed me. *** We had an interview yesterday... Read more →

After the meeting, we all came home, had some lunch, played in the backyard, watched the refrigerator repairman shake his head discouragingly, paid for that head shaking with the for-emergencies-only credit card, and put the boys down for naps. Jason left to spend a couple hours at his office. I called my mom. I was okay until I got to the part about the bus. Kids who attend our school district's preschool program can ride the bus. A special bus, just for them, that comes right to your house, with car seats and an aide, and... It's... You know, short. I stumbled over the word, laughed a little, and started crying. *** Our district actually has quite few preschool programs -- varying attendance, class sizes and levels of need. Early Intervention assured us that Noah would never qualify for any of them. When I called our former case manager this past winter in a full-scale HOLY FUCKING SHIT THEY'RE GOING TO EXPEL HIM FROM PRESCHOOL WHAT IS WRONG WITH EVERYBODY freak-out, she quickly managed to talk me back off the ledge and reiterated her belief that Noah would not qualify. At the most, he'd "maybe" get itinerant services, which is... Read more →

...IEPified. It feels like it changes everything and nothing, all at the same time. Read more → 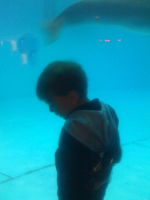 One day, someday, although my money is on it not being today, I will learn to shut my stinking piehole and not tell the Internet things. This was published yesterday, and you'll notice that I ever-so-casually mentioned that yeah, neither of my kids have any food allergies! Isn't that great? I mean, so far, and all, knock on Ikea end table made of a wood-like material. So of course after dinner last night, poor Ezra erupted in hives all over his arms and legs. Mama erupted in a case of raging alcoholism. And because I'm a cocky know-it-all MORON, I'm having a hard time pinpointing what caused the reaction, since while my in-laws were here we showed off Ezra's admittingly amazing palate and appetite like a goddamned party trick, allowing him to eat pretty much anything off the table without keeping track of how many new ingredients he was getting exposed to and how many times. I THINK we can blame it on some spring garlic that I bought by mistake at the farmers' market and just started using in place of leeks (which Ezra has eaten multiple times, which is what I meant to buy but was in a... Read more →

If This Post Had a Topic, I Would Summarize It Wittily Here

Oh, hi. I spent the weekend stuck in the house with two feverish children. And my in-laws. And the two aforementioned feverish children, in case you missed that previous, uh, aforemention. That I mentioned. Afore. That means you're in for a THRILLING post today. Seriously, buckle up, and try to keep up with all the different plot points I'm going to throw at you via The Only New Photos I Have To Post Where Nobody's Nose Is Running And/Or A Seriously Pissed-Off Teething Baby Is Not Wailing At The Camera: This is Ezra sitting up on his own. He rarely needs the crash pillow anymore. Not that he ever actually falls in the direction of the crash pillow. Usually he just aims for whatever pointy, unyielding object is nearby. And OMG, it's a slightly different angle of photo, taken less than 30 seconds later! I just don't want you guys to miss a THING that goes down around here, is all. AND THEN HE TOOK THE BOOK OUT OF HIS MOUTH! BET YOU DIDN'T SEE THAT ONE COMING. Whew. That was exciting. Almost as exciting as the new front door handle Jason installed this weekend. Because the other one broke!... Read more → 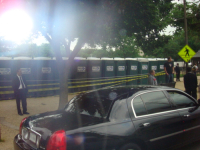 (This fucking economy, man. Hollywood is HUNGRY.) So last night I had the distinct privilege of being Linda's plus-one for the big! red blue carpet! premiere! of Night at the Museum: Battle of the Smithsonian. (The PR team in charge of the outing: "You have a blog too? That's adorable!") This is how we do big fancy movie premieres in DC, you guys: Port-o-potties as far as the eye could see. As we pulled up in our glamorous stretch limo short bus in front of the Air & Space Museum and a huge crowd of people who had apparently not figured out that the celebrities were already inside, I could barely contain my excitement and sudden terror about tripping on the bus steps and falling flat on my face. I did not fall down, which meant it was now time for the descent into increasingly embarrassing fameball douche behavior. "Smile, people in crowd who don't have tickets to get in! We're posting these on our MOMMYBLOGS!" (I cannot lie, though. Linda. Sundry! Seriously just as funny and wicked and potty-mouthed as you imagine, or at least desperately hope. Port-o-potty-mouthed. Between her sailorspeak and my tendency to worry out loud over... Read more →

So I didn't update yesterday because I couldn't think of anything to write about. Some half-formed possibilities included: Wow, Gee Whiz, But Lots Of People Have Similar Problems With Their GPS Unit, Howza About That Pooping On The Potty as a Diabolical Stalling Tactic Didya Ever Go Too Long Without Logging Into Facebook and Then You Log In and It's All Like, Whoa, And Stuff? This Coffee Tastes Like Shit I came very close to settling on possibility number five, which was: Here, Have Some Baby Pictures. But for some reason Jason took our camera to work on Monday and I have not seen it since, and honestly Ezra has been so PARTICULARLY CANTANKEROUS since getting his vaccinations on Tuesday that I don't feel too badly for letting this week go by un-photographed. He pretty much looks like this: >:-( Only, you know, louder and more 95th percentilish. Then I was going to write something about my boobs, because they have been up to no damn good lately, as in my once abundant reserves of milk appear to be d-r-y-i-n-g u-p no matter what I do, no matter how much I nurse or funky tea I drink or Fenugreek I... Read more →

To Do: Drive to Doctor's Office, Walk in Door, Fail Spectacularly

Here, I drew you a picture of our trip a new pediatrician this morning: (Click to embiggen and like, really DRINK IN the artistry of those brushstrokes) After regarding the mailbox for awhile and determining that it was, in fact, a standard blue United States Postal Service mailbox and NOT a pediatric practice with a bitchin' infant drop-off system, I figured we should head towards the nearest actual office building. Which as you can clearly see, is Not The Doctor. Not Our Doctor, anyway. There were many doctors in it, and I'm sure they are lovely doctors, even if the design of their building leaves something to be desired, as...I don't know, I figured DOORS are usually somewhat adjacent to PARKING LOTS and basically ended up circling the entire building -- like some kind of suburban obstacle course designed by MC Escher -- before finding the door. Which was Not The Door To The Doctor Anyway. The Doctor was at 101313 Major Big Ass Road. Not The Doctor was 101310 Major Big Ass Road, although the building number was -- YOU GUESSED IT -- not anywhere near the goddamn door, but sort of diagonally facing the road, and blocked by... Read more →