Ezra had his nine-month well-baby appointment today, where it was brought to my attention that my baby is NINE FUCKING MONTHS OLD. I've now officially had him in my arms for as long as I had him in my womb.

And during those first nine months, Jason would often rub my belly and talk to it, and mention his growing impatience with the whole gestating process (GET IN LINE, BUDDY), and his eagerness to meet "this little guy." Who was he, this new hypothetical boy? What would he be like, once he was here?

We know those answers now, of course. He is our Mighty Ez, our Baby Zee, our Ezzie Man. He is awesome. Truly, honestly, just beyond awesome. 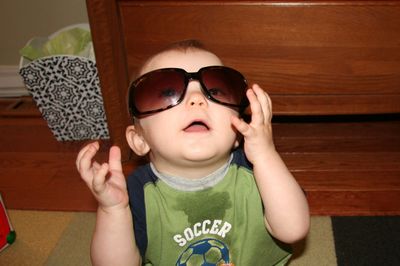 He is a mimic, a charmer, and a flirt. He knows the power of his smile. He will wave and clap and tilt his head coyly to the side until you pay attention to him. If you ask for a kiss he will give you one, along with some tongue and a delighted giggle. Everywhere we go, people stop to stare at him, to talk to him, to delight in his cheerful good nature and marvel at his perfectly round head. Adorable, they exclaim. Cherubic. Angelic. Delicious. 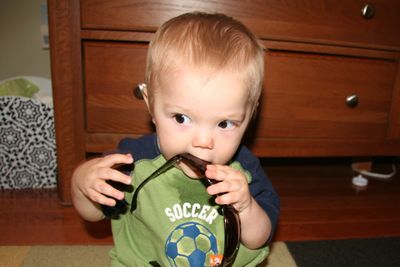 (Do not lend this baby any money.) 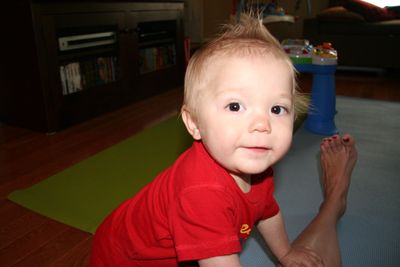 He can crawl now, I suppose, officially, though it's certainly not a pretty crawl -- a combination tummy scoot with extended leg propulsion sort of maneuver, though occasionally he gets everything working together in a slightly more dignified manner. He can get up and over the step in our living room and is a far more proficient stander-upper.

He loves remote controls, toothbrushes and anything that makes a lot of noise. Drums are particularly thrilling, especially when combined with a toothbrush or two.

He is the happiest, most personable, best behaved baby I have ever met. He is -- I'm so sorry -- easy. Sometimes I wonder if I switched to cloth diapers and shunned the jars of Gerber just because I felt like I needed the challenge. 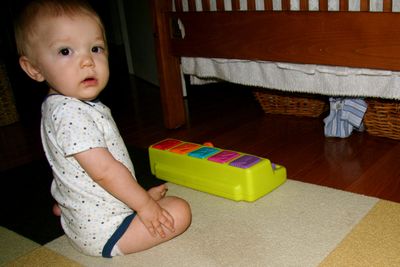 He loves his big brother more than anything. He thinks his big brother is the coolest. His big brother thinks his baby brother isn't half bad either. When Ezra cries, Noah does everything he can to cheer him up. "Don't cry, Ezra!" he'll say, while gently patting his head. When Ezra inevitably starts getting in Noah's way and grabbing at his toys, Noah will patiently find an alternative toy to offer him. Sometimes they just sit and laugh and laugh and laugh at each other, just happy to be making the other one happy. 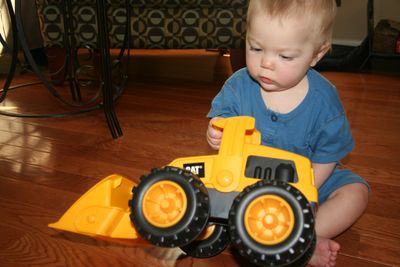 During those first nine months, I knew I was having a boy, despite never really quite getting a definitive look during our ultrasounds. I still just knew, somehow. I dreamed of a baby boy mere days after the positive pregnancy test and just knew he could not be anything other than another boy. Though some part of me probably just hoped for another boy because that would mean another Noah, another good baby, another of the exact same thing so I would know what I was doing this time.

Obviously, it doesn't work like that. And I'm so glad, because it's the differences that have made getting to know this little guy such a delight, and have made these last nine months so sweet and full and noisy and chaotic and rich. 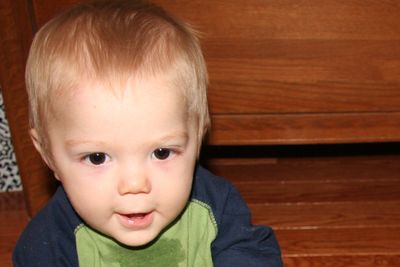 He looks a wee bit like Jason in that last picture! Love it.

Yay Ezra!! He is SUCH a cutie.

but i thought you just had him last week. hmm. funny how time flies when you're not the one living with the wee peanut. he is a delight and one lucky boy to have a mom (and brother and dad) who loves him so so much.

Sweet. Thank you for posting this!

What? Nine fucking months old? When did that happen?! OH, like in the last 270 days maybe?

He's adorable. Truly. Almost enough so to make a crotchety "i'm done having teh babiez" like me want teh babiez.

Ok, so I'm having a boy and wondering all of those things... who will he be? Can I love him as much? Will he adore me? Will he like broccoli? What will his coloring be? Will he SLEEP? And all of the other crucial questions...

PSS - "Doll" in the most masculine sense. I don't have much boy practice over here...

Whenever someone compliments my daughter...she is so sweet, friendly, etc; I always say "I know!" What else can I say? She is eleven and just getting sweeter. Here's hoping she stays that way!

Ezra is adorable! As you very well know!!!

Nine months? How is that possible? He's beautiful!

I recognize that crawl! My guy only crawled like that...well, ok, he did figure out a proper dignified crawl like last month. He's 21 months now :) His leg propulsion crawl did enable him to switch back and forth between sitting and moving very quickly!

Hi Amy, I have been reading your blog for years, since you were trying to get pregnant with Noah. I'm in Melbourne Australia, and was struggling to fall pregnant with my second then.

Anyway, all is well, and I wanted to tell you that I have two boys, now 6 and 3, and they still love each other to bits! I also have to warn you, we used to call our Number 2 Angel Baby, and he became Monster Toddler.... Good luck, and thanks for all the laughs and tears over the years. x

nom nom nom
must die now from all the cuteness i just ingested!

Happy 9 months b-day, Ezra! You are too cute for words!

God, he's really just cute as a button, isn't he? What a sweetie.

Your Ezra is truly the most adorable little boy I've ever 'met' on the internet. Almost as cute as my own boy even, and that's saying a lot :) Love the pictures.

Both your boys are just as cute
as can be. I love your entries
like this, it helps me remember
a time when my two big, hulking,
teenager boys were sweet and
charming. They still can be,
but it's usually more surly.

OMG. Had my 7-month-old daughter's "6-month" check-up yesterday. These were her EXACT stats. I'm terrified she's going to be HUGE now.

So. Stinkin. Cute. That is all.

Ezra is one of the reasons that I'm currently pregnant (first baby, also convinced it's a boy - have to wait a couple more months to find out). Ez was one of the most beautiful newborns I've ever seen - seriously. You guys make gorgeous and amazing children! Thanks for sharing them with the rest of us :-)

@Kelly--at least they aren't eerily close to your 4 month old's stats...(which is to say they are close to MY 4-monther's stats. But we resigned ourselves to his hugeness--hey, we should call him that: "Your Hugeness"--long ago).

he looks so much like noah, and still so different. i'm so glad that you let us share your journey.
oh, BTW, i am a total dork and the other day i updated my facebook status to say something like 'omg, amalah responded to my tweet!'

not to take away from your popularity, but i didn't really think any of my facebook friends would have any idea what i was talking about.

i got about a million responses from people being like: "I LOVE AMALAH!'

so, in case you didn't know, you are loved.

I love when they get to be nine months old. You start to really see their personality. This is the age when, while you're carrying them around on one hip, they start clicking their heels into you, as if steering a horse. Fast clicks means hurry up and get that thing I'm pointing to. I so fell for that.

You are not helping me get over my baby fever with all the ridiculously cute postings and pregnancy thoughts over the last couple of weeks! (Hubby is making me waitttt.... to be sure that it's what I really waaaannnnttttt.... again. And, some blah,blah financial/security stuff...whatever - give me baby now! :)

So, as usual, I am living vicariously through you and thinking pregnant thoughts your way.... And, wow, when the heck did Ez get to be 9 mo???!!!

PS - Lots of my friends love you too! (I made all of them ready Zero-to-Forty and they got hooked on ya like I did!)

Happy nine months to both you and your adorable, cherubic, delicious (I KNOW YOU KNOW) son! =)

LOL I was just thinking my 3-month old's stats are getting way too close to Ezra's for my comfort. Where did my tiny baby boy go?!

Happy 9 months Ezra, I hope the next 9 are just as fun and worry free for you mama.

He really is such a delight, I love the photos you snap of him! Nine months is pretty darn official, isn't it?

I can't believe he's crawling! Leave it to baby boys to handle locomotion at a crazy early age!

I don't want kids but if i could have your genes i'd be on it in a new york minute. congrats on such wonderful kids!

I love the fact that they just sit and laugh together.

Adorable! You're so lucky that he's easy, too.

I love Ezra. I'm so glad he's here, and it's been a pleasure getting to know him.

I know exactly how you feel. Two boys- one almost 5 and Sid is now almost 14 months. My nickname for him is Sidalicious because he is so freaking delicious.

Two boys are the best!

I can't believe Ezra is now nine months old. I've loved watching him grow through your blog. And your stories - oh, how I love your stories. I wish I lived in DC, so we could be friends.

THAT CHIN!!..my husband still has a chin like that..and I bite it often..ok, feeling awkward now..
But Ezra is yummy and an OBVIOUS Fashionisto, thanks for posting those pics.

Yes, Ezra is stinking adorable and nom-a-licious. Also, thank goodness you had at least one easy kid, right?

You are being featured on Five Star Friday!
http://www.fivestarfriday.com/2009/07/five-star-fridays-edition-63.html

What a gorgeous little man! And what a terrific age. I have two boys and a girl, and really watching my oldest, and now my middle, care for their little siblings has been one of the highlights of my parenting life.