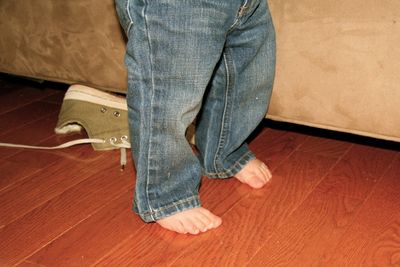 One tentative first step yesterday, one that I only barely happened to notice, right after I turned to look at him for no particular reason. One second his hand clung to our bedframe as usual as he made his way across the room in search of mischief or perhaps an errant steak knife, and then he let go and continued to shuffle and wobble forward. Two seconds, tops, and then he dropped back onto his diapered butt and looked up at me in surprise. I shouted downstairs to Jason: Ezra took a step! He just took a step!

And then silently, to myself: I'm so glad I got to see it.

Less than an hour or so later, at a neighbor's open house party, Jason and I watched him take two, three more. We pointed and grinned at each other from across the room, like big fat pantomiming loons, both just overly pleased that we both got to see it that time.

It's hard not to be super uber-cheesy about the first steps. Sure, mobility = giant sucking suckhole of hell and headbruises. And walking = the end of babyhood, the official passage into full-tilt toddlerhood. But it's still such an AWESOME milestone. I remember contemplating the spindly chicken legs and floppy heads and torsos of my newborns and trying to picture them walking. It seemed ridiculous, like there was a better chance that goldfish would spontaneously evolve and crawl out of their bowls on newly sprouted haunches than one of these helpless flailing creature actually walking upright within the span of 12 months or so.

And then before you know it, they're up, and they're off. 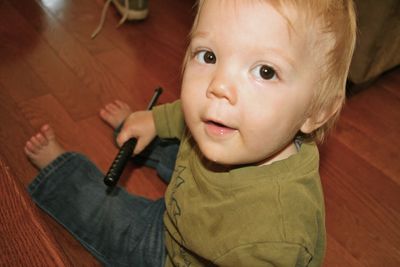 Think of the fun he and Noah will have chasing each other around the house!!

I swear my kid took her first steps at daycare and they just decided not to tell me. One day she came home and just... well... walked.

And I still refuse to call her a toddler.

GOOOO Ez! (but not faster than your mom can keep up with!)

Yay, Ez! Way to get mobile!

Hooray!
And is it just me, or does he looko EXACTLY like you in this photo?

I remember when I first saw Aiman crawl forward instead of the back and forth pumping that he normally did. I was stunned. Like...it was happening. My baby was becoming mobile.

Now he's cruising around on furniture and I can only hope that I'll be there to catch his first few steps too.

And Ezra is so cute in his little jeans. =)

Congrats! Your boys are adorable. I also have to say I love Ezra's jeans. My daughter is also cloth diapered, and I can never find anything but sweatpants to put over her big cloth diapered bubble butt.

My little baby girl just this week took her first steps, and now a few days later, can walk across the room (although she still chooses to crawl when she's Serious About Moving). Crazy! I won't make it official (by twittering, natch) that she's a toddler until she does it without prompting.

so, Ezra's walking AND wearing pants. . .coincedence? I think not!

And now that you mention it, Keely, he DOES look just like Amalah.

Way to go, Ezra! Gosh, Amy, he looks SO much like you, wow! Congratulations :)

is that a lighter he's holding? so glad I've got competition for mother of the year, I swear my son's favorite toy is the carrot peeler and so help me he keeps finding where I hide it...and child locks, he figured out those before I did.

Awww, congrats! Man, it seems like he's getting bigger and bigger on a daily basis at this point.

I am pretty sure that when my children start taking steps that I am going to yell at them and push them down. I don't want to to walk!

And babies in jeans = cutest ever.

Same question as Tasha... is that a torch he's holding?

Could he look anymore pleased with himself??!

You is officially DOOMED.

Is he in cloth with those jeans? If so what kind of jeans? BG and FB are pretty trim, but wow! (If he is in cloth)

HA. No, he's not holding a lighter. Just a good ol' fashioned eyeball-pokin' stick. (AKA plastic drumstick from a toy instrument set.) Banging On Things is a great game! Hours of entertainment!

And yes, he IS in a cloth diaper. FB, I think, specifically. The jeans are hand-me-downs from Old Navy. 12-18 months. ON isn't usually the best for the big butts, but (ha!) we have a couple pairs that fit really well over the diapers.

(They fit Ez better than they ever fit his super-tall but super-scrawny big brother, hence the like-new condition.)

I just can't remember when Ezra became your identical twin in baby form. But it happened somewhere along the way.... FYI

Ahww!! Mini-Baby-Amalah-Ezra is on the go!

CRAZY!! My baby girl took her very first step yesterday morning and then fell flat on her face. It was awesome!! Fortunately for me, she only took the one. I'm not ready for the next 100 steps and I have to chase her all over.

I will cry when Jonah learns to walk.
Cryyy my eyes out.

Yeah - I thought he got ahold of the steak knife too. Hooray EZ!

Well - not hooray STEAK KNIFE... hooray walking! You got that, right?

I LOVE "And then silently, to myself: I'm so glad I got to see it." I just KNEW I was gonna miss Jack's first steps because of work, but I didn't, I got to see them. I've been shutting toilet lids ever since!

My husband and I were watching TV when Miles took his first steps. Good thing there wasn't anything good on, we might have been too engrossed to witness the miracle of the upright baby.

I once accidentally taught a kid to walk while I was babysitting. There was no use hiding it either, especially when his brother screamed, "Mom, guess what? Blake can walk!" I wanted to crawl under the couch.

Congratulations, Little Ez! Next up: RUNNING! (Also making your mama pee her pants a little.)

They grow so fast. Sniff.

I just realized I can't remember exactly when either of my kids took their first steps.

Man, why wasn't I blogging then??

Plus, just LOOK at those cute little toes!!

this might be too late (or you might already be aware) but I finally asked someone what the difference is between (for example) size 3 and size 3T, and apparently 3T is made a bit baggier to accomodate a diaper. Not all store differentiate, but I know Gymboree does, as well as Osh Kosh and Carters... just something to keep in mind...

My daughter started taking steps at 9.5 months. I about died. My son started at 12.5 months, and I thought that was too soon. Babyhood should last longer. Except the whole waking up in the middle of the night thing.