Th *** No, seriously. That was my attempt at an entry yesterday. I sat down with the best of intentions and at least seven different topics rattling around in between and I did that dramatic arm-stretch-finger-wiggling thing and typed two whole letters. The? That? They? I don't even remember. Despite officially taking his first tentative steps a couple months ago, Ezra -- driven by the urge to either keep up with Noah or avoid getting trampled by him -- still mostly crawled everywhere. Until, like, Monday. Now he really and truly walks, FrankenThriller-style, all over the place, shrieking gleefully at the top of his lungs. LOOK AT ME, he says, HOT SHIT COMING THROUGH.* *Sounds more like AY YI WOW ZA EEEEEE, but I'm a pretty good translator. **Also, yeah, that's our recalled Maclaren lurking ominously in the background of those photos, still waiting for the replacement hinge cover doohickey things. I told Ezra if he touches the Christmas tree the stroller gets to eat his fingers.*** ***OH, that wasn't funny at all, I know. And yet I am leaving it there, because I am a horrible person. *** Since I spent my actual birthday in the car, in traffic,... Read more →

Thrilling! Christmas Recap! But Only Kinda! 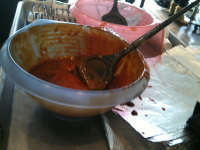 THINGS I DID: 1. Dyed my hair red. 2. Like, seriously red. 3. Like Dr. Horrible's Sing-a-Long Blog red. Like mentally ill ginger with eyes like a bush baby red. Like I have been clearly watching too many geek-friendly musicals red. DONT STOP BELIEEEEVIN. 4. Cursed out a jolly plastic toy rocking horse using a slightly different interpretation of the words "insert" and "slot A" and "slot B." Drank way heavily. 5. Confronted childhood fears. Drank way heavily. (Trust, you'll be reading MUCH MORE ABOUT THIS LATER OH YES.) 6. Instilled all-new childhood fears in the next generation by letting Noah watch The Wizard of Oz. 7. Ensured another barn-burner of a Christmas season for the fine folks at Energizer and Duracell, discovered that I suck at Tinker Toys, made (and ruined) Christmas breakfast with help from the Top Chef cookbook. 8. Went to Pennsylvania. Confronted crazy family, wooden cows, frizzy hair, bangs doing That Thing. Thoroughly traumatized mother with opening montage from Pixar's Up. Drank way heavily. 9. Turned 32. More of the same. THINGS I DIDN'T: 1. Take any photos of our holidays except for photos of my hair, just in case there was a Facebook emergency that... Read more →

BACK THE FUCK UP. IS THAT THE ISLE OF SODOR ALL OF A SUDDEN? IS THAT A RAMP? AM I TOTALLY MESSING WITH YOU RIGHT NOW? FUCK, IT'S A RAMP, MOTHERFUCKERS. WITH DUPLO BLOCK COLUMNS. ARE YOU KIDDING ME WITH THESE DUPLO BLOCK COLUMNS? IS THAT GENUINE FAUX COBBLESTONE DETAILING ON THOSE DUPLO BLOCK COLUMNS? SERIOUSLY. LOOK AT THOSE FUCKING TRUCKS. THEY'RE ALL, WHO LIVES HERE? THE POPE? WE'VE GOT COWS. WE'VE GOT MILK THAT IS DISPROPORTIONATELY LARGER THAN OUR COWS. ALL THIS, AND WE'RE ON A BOAT, MOTHERFUCKERS. HOLY SHIT, IT'S A BRIDGE. AND LIKE THREE OR FOUR OTHER BRIDGES AT LEAST AND THE TRACK GOES AROUND IN LIKE A LOOP OR SOMETHING CRAZY LIKE THAT, OH MY GOD BECKY. HOLY SHIT, IT'S A WINDMILL. AND A CASTLE. I KNOW YOU CANNOT EVEN FUCKING BELIEVE YOUR EYEBALLS RIGHT NOW BECAUSE THE GENUINE FAUX COBBLESTONE ON THAT CASTLE TOTALLY MATCHES THE DUPLO BLOCK COLUMNS. EVEN THOMAS IS ALL, CONGA LINE, THEN WE GO FIND SOME BITCHES. SNOW DAYS BE BALLIN'. (They canceled school tomorrow, too. Then it's winter break until January. I'm kind of afraid. There's still a lot of extra track down here.) Read more →

Life at the Overlook Hotel

Obligatory Kids Out Cavorting In The STORM OF THE CENTURY Photos When you're only three feet tall, two feet of snow is downright magical. Once you're over five feet tall, it's mostly a pain in your chapped-up ass. Especially if you are like me, and thus woefully unprepared for this sort of nonsense. This was my plan to protect my Ugg boots. I think the bags may actually be an improvement, aesthetically speaking. We mashed Ezra into a size 6-12 month hand-me-down snowsuit and dropped him into the nearest snowbank... ...failing to notice that he managed to lose his mittens within the two freaking feet between our front door and this very spot. I would like to point out that those mittens are hand-me-downs from an entirely different child and source. And yet they match! This is so very deeply satisfying for reasons I cannot fully articulate. Noah's mittens totally match his coat too, but you can't tell. SO WHATEVER. The Hanna Andersson catalog is a load of photographic LIES. Daddy = jerk Ezra = highly amused Then = vaguely disgusted Noah would've stayed outside until he was a preschooler popsicle. Ezra was mostly all, EFF THAT, IMMA STAYING INSIDE.... Read more → 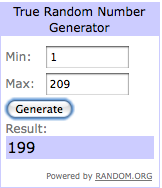 (A real entry is coming later -- thanks to school closings, I'm busy playing Wii with my cleaning lady's children and feeling like the Biggest Spoiled Bourgie Asshole ever. Also, they are kicking my ass at bowling. What the HELL.) Just wanted to pop in and announce the winner of that Shutterfly thingie. Out of 211 photo books, two were mine (I was so pleased with the first one that I ordered another, bigger, fancier, paid-with-my-own-actual-cash-money one as a gift for a few people), so I used a random number generator to pick our winner: Counting up from the first book submitted, our winner is Andrew's ABC Photobook by ElizabethW378. Hooray! You win stuff. Please contact me ASAP so I can give you the prize codes for all of the said stuff. Thanks to everybody who entered and let me peek at your photos. You're all way too adorable and stuff. Stop it. Read more →

POINT THE FIRST: For everyone who doubts in the existence of false positives, please go and Google "Target Up and Up Brand Pregnancy Test False Positives." Please note the dozens and dozens of testimonials describing exactly what I saw on my test: a faint but definitely-there line almost immediately (it darkened a lot by the time I took the photo, but did appear in the initial three-minute testing window), confusion and a string of negative test results afterward. Basically, if you're every in the mood for the mental and emotional ass-fuck of a false positive on a peestick, Target is the brand for you. Otherwise, DON'T BUY TARGET UP & UP BRAND PREGNANCY TESTS. THEY ARE TEH CRAP. I PEE ON THEM. POINT THE SECOND: For everyone who was convinced they saw a second line in the third test, which, I dunno, trick of the camera or something because I assure you there is NO LINE in the actual physical test, please check out this inverted version of the photo courtesy of Ryles. Absolutely, definitively no line. POINT THE THIRD: Sorry, everybody. (I bought like, six dozen different tests because OF COURSE I DID. I will alert you if the... Read more →

Much Like the White House Party Crashers, This Is All Reality Television's Fault

Yesterday, 2 pm, after a combination of 1) mild yet persistent stomach issues, 2) boob weirdness, 3) overwhelming craving for an entire can of black olives in spite of said stomach issues, 4) the realization that condoms DO INDEED have an expiration date, hellooooo May of 2008, and 5) entirely way too many episodes of I Didn't Know I Was Pregnant, better known in our house as The Oops You Had a Baby In Your Pants Show: Better known as Exhibit Wait What Squint Squint No Way Squint Oh Shit Yesterday, 5 pm, after my plan to wait until morning to retest failed miserably in the face of Googling for pictures of other people's store-brand peesticks with very faint second lines but not like, a real second line and I totally didn't actually think I was pregnant, I was just checking, because taking unnecessary pregnancy tests is kind of a hobby of mine: Better known as Exhibit That's More Like It Today, 7:30 am, after a restless still-unconvinced night of boob-poking, attempts to imagine life with THREE OF THEM, followed by fits of maniacal laughter: Better Known as Exhibit Well Now We Know How We Really Feel About THAT My... Read more → 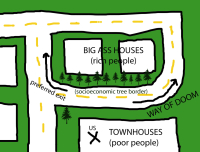 The Hardest Part, at least from a day-to-day basis, the rigid, inflexible thinking. Things that must be done the way they've been done before. No variation, no deviation, from morning (and the order that breakfast items get set on the table) to night (pants come off first but socks come off last and books must be read while sitting on the right side of the bed RIGHT SIDE RIGHT SIDE!). Routines become rituals and the rituals are a religion. It's all CONNECTED, of course, we're told. I fret about OCD but am assured that no, it's SPD. Dyspraxia is a motor-planning disorder, but when you add in tactile and auditory hypersensitivity and fine and gross motor delays and receptive and expressive and pragmatic language delays and whatever-the-fuck else we've been diagnosed with at some point or another...well, you've got a child who can't sequence day-to-day problems, or recognize patterns in events and behavior, who can't reason things out to their logical conclusion, who doesn't understand the order of the world and other people and basically exists in a tensed-up state, minutes away from fight-or-flight mode at all times. Okay, not at all times. But just enough for it to feel... Read more →

Topics in search of cohesion

Well. The inevitable happened. My microwave totally found out about my blog. How you gonna mock me and my ancestors NOW, bitch? Go ahead. Nuke some popcorn without your fancy modern turntable and lemme know how it goes. *** Speaking of the Inanimate Object Uprising of 2009, I've had a vicious, three-inch-long black-and-blue mark on my left thigh on and off for years now, ever since we moved into this house. And I have absolutely no idea what piece of furniture is the culprit. I've tried to line it up with all of the obvious pointy corners, then gone through the regular motions of sitting down/standing up, and am now opening cabinet doors and drawers, and seriously, it's starting to really unnerve me that there is SOMETHING that I have managed to repeatedly walk into for THREE YEARS and yet cannot for the life of me identify what it is. Thus I cannot move it or unhinge it or take out back and shoot it because IT'S A REALLY PAINFUL BRUISE YOU GUYS. *** While I was typing that paragraph, Ezra found an open box of linguine in the pantry. *** The Shutterfly contest has up and been extended another... Read more →