Not Quite Sick But Not Quite Well

Portrait of misery, and a dog who could not give less of a shit, please just make that thing stop whining already.

So Ezra is either teething again -- canines? is it too early for those? my children seem to sprout teeth at a hyper-accelerated schedule, as most of Ezra's playmates have like, three teeth and he's sitting in his high chair expertly gnawing on a Porterhouse with his back molars, and expresses his affection for people by trying to eat them -- or he might just need to poop. Yes, it's a real medical mystery over here. Symptoms include truncated naps, general fetchiness, insatiable appetite for pot roast. 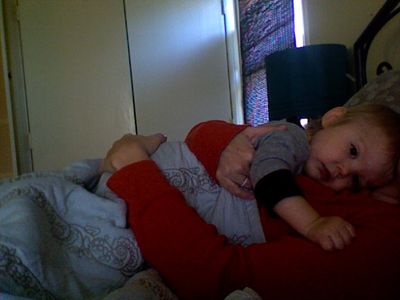 In fact, I think it's time for some more of this, since he looks like he's about 30 seconds away from falling asleep fast first in his pot roast and peas. He's all smelly and meatgreasy. Delicious.

PS. Don't forget to enter the Shutterfly contest by Monday morning. Since yes, it requires ACTUAL EFFORT AND THINGS, your odds of ACTUAL WINNING are really good. Plus, it's fun to snoop through y'all's photo books. They're like medicine cabinets, in a way.

PPS. Also, both Amalah and Mamapop have groups over at Savvy Source. It's like a Facebook fan page without the "fan" connotation, which I totally hate. There's like, book and toy and activity recommendations, and you can totally use your Facebook profile to join so it's all easy and stuff. So say hi and welcome to complete and utter social media overload, mwa ha ha.

Aw he is so sweet! It makes me wish the little boy I'm babysitting tonight will have a teensy bit of trouble getting to sleep just so I can have a bit of snuggle time :P

I could totally go for one of those. With a side of blanky, kthx.

Oooh, teething is no fun! I was able to calm Maureen with raspberry sorbet from Trader Joe's.

And now that that's out of the way, sorry to hear about the kiddo. But I do always enjoy a glimpse into the life of Her Royal Pursedogness.

Such the double edged sword (for lack of a better cliche or brain that's more creative)...you don't want them to be sick, but man the snuggles you get because of it are AWESOME!! We, and by "we", I mean the baby, are currently cutting all 4 top teeth...we feel Ezra's pain.

Aw, feel better, Mighty Ez! (And my yorkie/rat terrier likes to sit slightly elevated as well. Could it be a Napoleon complex with all small dogs or just a way to get away from tiny grabby hands?)

Oh...I could die from the Ezra-cuteness.

Oh, it's super wrong to relish a little illness in babies just so they'll snuggle. But I've totally done it.

Which reminds me: we love the Mighty Prince Ez. He is an adorable little ravenous snugglebunny.

BUT WE NEED MORE PICTURES OF CEIBA!

Oh, how I love that little bat-eared hot mess.

Sad but true - the best thing about teething in our house is that kiddo slows down enough to cuddle. Is that so the rest doesn't drive you bananas?

Awwwww, you hate when they don't feel good but smooshy sleepy hugs are THE ABSOLUTE BEST.

That one picture almost makes me want to have a kid RIGHT NOW just for the toddler snuggles!

These comments make me feel better. Hank never, ever, don't even think about it, cuddles. He might slow down for a moment to nurse, but even nursing to sleep he's sprawled in my lap, legs on the side of the rocker, arched back, so we're barely touching. I thought everyone else's babies were cuddly little soft bits of wonderfulness and I had this unaffectionate brute. But apparently most babies can't be bothered to slow down to cuddle, unless they are ailing. I guess I should be thankful that Hank has avoided getting sick so far--but instead I'm a little jealous of the snuggles. And the pursedog.

Poor boy :(
I do love it when they get all snuggle though , my boy is not one for cuddles except when feeling a little down.

Gotta admit I'm jealous of the snuggles. My 11 mo old son rarely wants to snuggle so I'd take it, sick or teething or not.

dear god! his first brown and white outfit reminds me of my son. i won't go into the other depressing stuff about him....

Anyone else have that Harvey Danger song in their head now (thank you, Amy)? No? Just me? Okay then.

Poor baby. I hope he is feeling better.

My 11 month old twins are teething right now. I wish they were snuggly like that!

Snackbox developed broncholitis this weekend - oh, the wheezing just stops my heart - and wanted to be UP UP UP so he could rub snot and cracker crumbs on my shirt. I'm good with that - it'll wash.