It's Like a Toy Store That My Children Haven't Visited Yet

I'm not sure there's anything more futile than spending significant chunks of time, energy and money on organizing a room that is guaranteed to get thoroughly trashed again in a matter of hours*, but damn, it's satisfying.

*Minutes if they've had frosting. 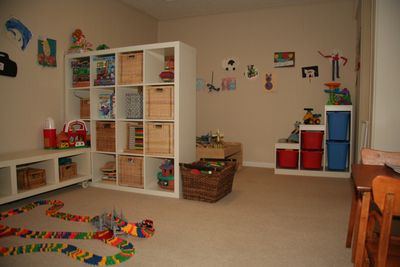 Satisfying in the fleeting way that Snickers bars and McDonald's fries are satisfying, but still. 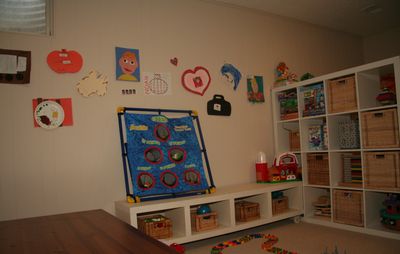 Jason was impressed with my preschooler art-project gallery, having been unaware that I'd gone out and bought special hangers for everything. I didn't have the heart to tell him that I'd been struck with the idea randomly at 11:30 pm and just grabbed the nearest box of thumbtacks. 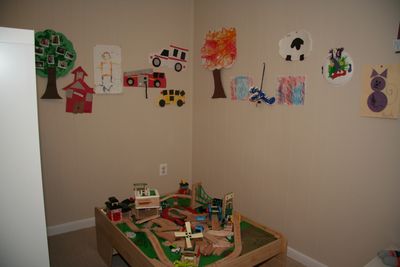 Whatever. Thumbtacks were good enough for my New Kids on the Block posters once upon a time, I THINK they're good enough for a fleet of two-wheeled rescue vehicles that I Am Very Sure My Child Had Very Little To Do With. 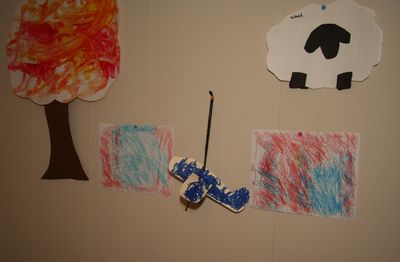 (Though I think I hung at least one of these pictures of our house and the Jamaica house upside down, so perhaps some tape would have been a wiser choice. I get points for the airplane right? That you can make go back and forth? I thought of that all by myself. I should totes open a gallery. Or get a cookie.) 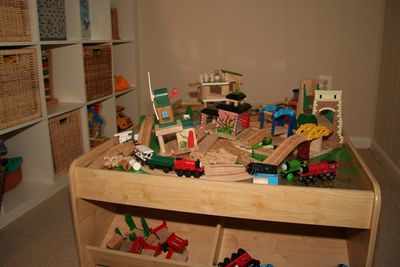 I'm sorry to report that the Isle of Sodor did not fare too well during the room overhaul. 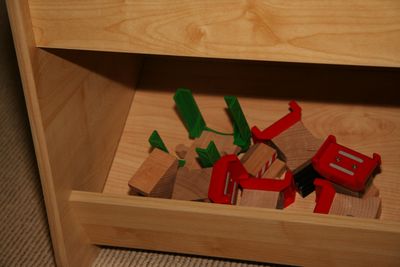 The monorail supports were repo'd, a victim of stalled neighborhood gentrification. 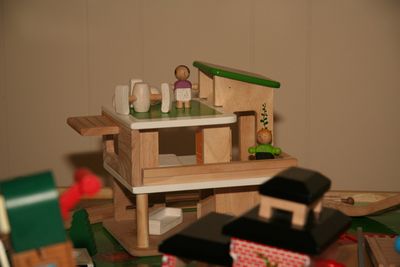 Plus a bunch of fucking hippies moved in, with shit like wind turbines and solar panels and potable water containers, but it turned out that all they were really growing on the "living roof" was pot. 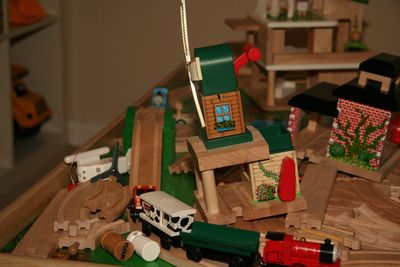 "We shall rebuild!" pledges Thomas. "We have a helicopter and cranes and tank engines. Plus a will to succeed and plenty of short-length curved track and female-to-female connector bits."

"What we don't have," he added, "is opposable thumbs. That's really our biggest obstacle."

(Kind of not relatedly, it's WTF Tuesday at MamaPop Sparkle Motion. As in, WTF Were They Thinking, or, or WTF Is With Amy &The Train Set Thing, Seriously, I Don't Quite Get These Entries & Wonder If I Missed Something.)

OMG toys! (I like the stage where they play with newsprint and pillows...)

Woo hoo - I'm rather a fan of the female-to-female connector bits.

Ahem. What I meant to say is that the room looks great!

Yes! I haven't seen "The Sodor Chronicles" in a while! and now that I have a child, I have to add that I now watch Thomas and laugh my ass off!

That fleeting satisfaction in organization and cleanness... ohhhhhh is it sweet. Satisfying like MCD fries, yes. Or perhaps a whole pint of Haagen-Dasz in one sitting. Mmmmmm.

but I have actually been looking forward to your next installment General Sodor Hospital or As The Train Turns or whatever it is. As long as there is plenty of inappropriateness and swearing that I can remember next time I'm on the verge of stabbing my eyeballs and eardrums out thanks to THOMAS.

I LOVE and MISS the Sodor Chronicles! The are truly one of the many great things about your awesome blog!

I LOVES me some organization!
I also love the Expedit bookcase! We have the eight square, which is currently stuffed to the gills with ponies and princesses and maybe a dog, but the barking could be battery operated..?
Awesome job, Amy!
They may trash it, but you have photo evidence that it WAS possible!

My favorite reference in this post - NKOTB. I saw them twice in 2008 (embarrasing).

It looks great! It actually reminds me of a really cool preschooler classroom. I likey.

P.S. I am always jealous of those of you in parts of the country that believe in basements. I grew up with basements, but have landed myself here in the south - where they don't exist. Apparently.

Love the cubbies in Toddlerland. Smart of you to take photos before the destruction commenced.

OVERACHIEVER! Just stop it already. You are making the rest of us look bad.

And here I thought I did good by recycling a booze gift basket "basket" to hold diapers.

The room looks great.
The only thing I love more than your love letters to your boys, and Thomas the Tank Englne posts are the Toothpaste Chronicals.

Wow, looks fabulous!
Ok, I am a total worry wort. Did you anchor the expedit to the wall? I have some ikea stuff and my little monkey tries to climb it...Of course I fear the stuff tipping over as it never is quite as sturdy as I think it to be.

Now this is a home remodeling project I can get excited about.

Also? I would feel like a much better mother if you would kindly post the after shots. As in - after your kids got in there.

Please God tell me there are after shots.

Very impressive! Gold stars for you, both for the organization AND the forethought to take photos before any destruction occurred. What a great playroom! Hope Noah can have his new friend over to enjoy it.

I love it! It looks great Amy! Now what's up with the kitchen re-do?

That looks awesome! Organizing is such a treat, isn't it? Now you can go back and revisit the pretty pictures whenever you're feeling stressed!

Looks great! Now come over and do mine, please?
And, Mommiepie, you are so *me* 12 years ago! Still have some of those crappy re-purposed booze baskets.

OMG, it seems that the island of Sodor is heading the same way as doomed Atlantis.
Unless there is a magically being with red hair to come and put it all to rights.

Totally love the playroom! I'm very jealous not only of your vision but also being able to pull it off! I need the declutter monster to have a go at my basement....

And yes, bring on more of the Isle of Sodor chronicles! That is some funny, funny stuff.

I was hoping you were going to share your pictures. I am in desperate need of ideas.

hot damn I'm motivated now....please let some neighbour be selling all of this at a garage sale soon...I need a playroom. Amalah - what is the video software you use for your birthday montages???

My GOD. I saw Sodor and thought I was looking at a CNN iReport of Chile. Or Haiti.

That line? I just crossed it. Then went back and set it on fire and crossed it again.

Oh my LAWD I am a worrier, too.

Is the Expedit anchored to the wall?

I totally covet the Plan Toys Eco House. Our library has one in the children's section, and Kaitlyn loses her mind over that thing. I'll just make sure it doesn't come with the "rooftop herb garden" expansion pack :)

Can you come organize my play room?

Uh...so we're supposed to KEEP the "art" that comes home with our toddlers? Seriously????

Wow. Those pictures of your playroom make me feel all warm and orderly. So what if it's fleeting. Enjoy it because you can. The kids, sadly, don't give a shit.

Oooh! Can I come over and play?

Looks awesome...or should I use the past-tense now? ;)