On Being Your Own Boss, Except When You're Not

Spring break arrived early this year, just to mess with me and my Productivity Skills and All The Very Important Bullshit That I Do. (New column up at The Stir, too. Word.) I've got over a week of All Noah, All The Time ahead of me and I really hate to admit this but the last hour and a half I've spent playing some incredibly convoluted game of Thomas trains has robbed me of a decent portion of my will to live.

I tried distracting him with a puzzle so I could check my email but he was so displeased at my failure to applaud each and every correctly-placed piece (but oh my God, it's a 100-piece puzzle! At least let me hold my applause until you finish a general area or match up a complete set of fish eyeballs!) that he abandoned it in favor of lying on the carpet and whining to an invisible teacher that "Mommy isn't playing with me the right waaaaay and she isn't shaaaaring and it's not faaaaair and she hurt my feeeeelings and isn't my friiiiiiiiiieeend anymore." I'm wondering how many preschool-caliber insults he's got left before he realizes that Ms. Beth is not here to referee, and also that I snuck out of the room 10 minutes ago.

I will say this: Noah takes his train-table play scenarios very seriously. They're basically a G-rated version of my own Days of Isle of Sodor Peaks As The Roundhouse Doohicky Turns, though they involve a lot more 1) going around and around in circles, 2) crashing, and 3) I don't know what else, the plot was a little complicated. 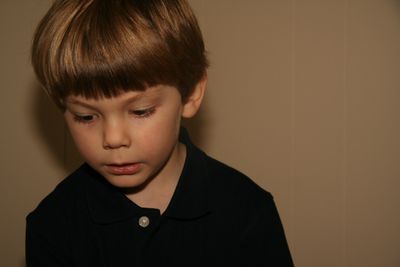 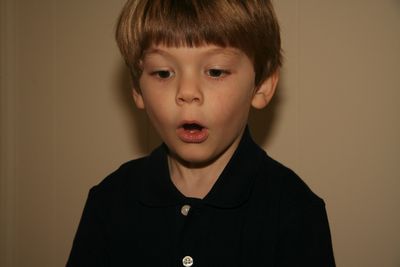 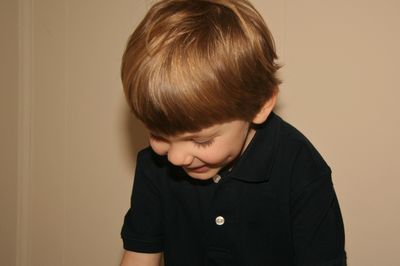 Something about windmills, I think.

Anyway, I have some puzzle assembly to supervise and an already more-than-healthy sense of self-esteem to nurture. He's figured out that I'm not downstairs anymore and is currently howling "STOP FINISHING YOUR WORK RIGHT THIS MINUTE" at me. I better listen before I get put in time-out, or something.

My toddler has recently taken to forcibly removing my hand from the computer mouse or keyboard if I am on there (which really isn't all that often when she's awake) instead of doing exactly what she wants me to be doing. Usually that involves wrapping her babies in blankets which lasts about 2 seconds before she unwraps it and then we repeat the whole process.

Sounds like you have a challenging week, (and a plethora of blog topics) waiting for you. Shopping for jelly beans and Peeps should help kill an hour or two!

Don't they seem to just have a sixth sense for when you are desperately trying to be productive for just five minutes? I think my son's jealous of when the computer gets my lap instead of him...even if he was previously loving being on his playmat/megasaucer/asleep!

Sounds like he's about ready to step in for Ms. Beth himself. But props to him on the involved imaginative play. My brother used to make up intricate stories about the Ninja Turtles that involved train heists and birthday parties where Shredder took all the presents (oh noes!). The level of detail that they can come up with at that age is crazy.

Windmills? In a Don Quixote kind-of way? That would be concerning (although possibly amusing).

I don't know. Time out would be looking pretty good to me right now.

I sympathize. I am currently caught with a deer-in-the-headlights look on my face realizing that mt preschooler will be out on Spring Break next week and omigod, I have NO childcare lined up and, oh yeah, I have to WORK!!

At least Abby enjoys playing "Checking our email" and "working" for 2.5 seconds at a time.

Have fun on your spring break!!

True story - yesterday I was on a conference call w/ a colleague who works from home. During the call I could hear her 2 1/2 year old faintly in the background. She explained that he was outside her closed office door. Another participant, a mother, asked "is he saying 'Mom'?" First colleagues answer "no, he's saying "knock, knock". Frustrating for the work from home mom, but truly hilarious to me.

I hear a lot of, "Put your phone back in your pocket, Mama."

I always feel better when I hear another mother admit that playing with her kids isn't all it's cracked up to be. I really think I would enjoy it a whole lot more if I first hired a cook, housekeeper, and personal secretary. I mean, my daughter has all three of those and she LOVES playing.

I have the opposite problem...my 1-year old thinks my computer is the greatest thing of all times. ever. way better than any stinking toy you keep trying to make me play with, suckas.

The good news is, it MAKES me put my work away when he's up, if only to protect my "g" key from going down the same treacherous path as the now dangling and covered in...chocolate? (i hope) "x" key.

At least one of us will enjoy all those awesome toys!

Well, I shooed my kids away while I was reading this, so um...

BTW-- Typepad is all jacked and not registering comments on the Mamapop site...

Is his hair suddenly much darker?

I thought it would be a good idea to get my daughter a train table too. Now I spend all my time being Sir Toppum Hat and telling the trains to get back on the track and be really useful after epic crashes. That's all I'm really allowed to do. I thought it would buy me time to do things around the house, but it seems my presence is required for every scenario. I feel your pain.

Wow. He looks A LOT like his dad in that middle picture. I guess I've never noticed. Maybe it's because his mouth is opened, making his face skinnier. The only way I can tell he's your's is the super blonde hair. Haha

I think it is a cruel time warp vortex hell on earth sometimes that little kid time moves sooooooo much more slowly than adult time. It feels like years have passed and you look at your watch and realize "oh crap, it's only been ten minutes."

Oh, I empathize. My 3 year old now has to have my attention RIGHT THIS MINUTE the second I try to get on the computer, make dinner, change the baby's diaper.... No train table yet but balls! Lots and lots of balls. Usually involving running around yelling 'Soccer Monster!' and 'ARRRGGH'. The rules are a little complicated.

And wow does Noah look so grown up now! I'm dreading the spring break childcare debacle myself....

I just want to thank you for posting this, because it makes me feel better to know we're not the only house with Island of Sodor issues.

"Play trains with me, Mamma" is a constant refrain from the moment I get home from work until bedtime, and woe be the day if I should do something else (like make supper or go to the bathroom). Good for you for playing trains for an hour and a half - I can't make it twenty minutes without my eyes glazing over. Its the constant crashing ("biffing") I think.

He does 100-piece jigsaws? Wow. My almost 4-year-old can just about manage a 24-piecer with a lot of help from me. Attention span not present.

We have spring break next week. I have exactly zero things planned, so I really hope the weather's good.

Just commenting to say that Noah's hair color is GORGEOUS and I am totally jealous.

Ulla - He just got a haircut, so he lost all his Jamaica-lightened ends, wah. It'll hopefully lighten up again.

mrs. q - Yeah, apparently it's a Typepad-wide problem. You can publish comments if you hit "Preview" first and then post. (Which means I have no idea if this comment will go through, as I never put a Preview button here. Hmmm.)

I promise you there will come a day where you'll look up and say "spring break? Where WAS he?"

mine stands between me and the sink pushing backward until I abandon any hope of doing dishes...damn, they just have to sit there another week...er..day I mean, day.

Sounds like Ezra is just fine - and THANK GOODNESS. But really, you did a great service because his symptoms were just like those that present for Type 1 (and my baby was 18 months when diagnosed; and more and more the kids diagnosed are under 4). So, your "panic" might just have sent one other parent to the doctor, and something was caught early, and maybe even saved a life.

So, really, thanks for your public panic...and thankfully Ezra is fine. --Stellasmom

My children are my bosses, too. I thought I am way past those times when I had to deal with them, but I guess I'm not. The only difference is that my children are individuals I would love to be my bosses for a lifetime. :-)