I have the sniffles. And my ear hurts. And I think my leg is asleep. Or maybe it fell off. Too weak to check. 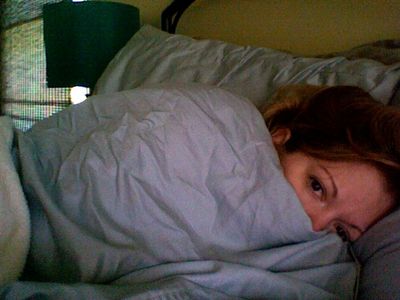 Where's MY comforting lap and Taggies blanket, dammit? Huh? Well? I am waiting.

I feel like Fridays have been getting a little cop-out-y lately, since it's where I pile up all the links to other things I've written this week but was too shy to tell you about in a timely-yet-contractually-obligated fashion, so let's just make a deal right now: The first person who complains gets sneezed on. 'Kay? Moving on.

1) Remember when I was pregnant and used to talk about puking all the time? Non-stop, constant, always with the day in and day out barf talk? Good times. You can totally go relieve those times at Bounce Back this week.

2) This week's Isn't That Special column is a story I was too embarrassed to tell you guys back when it happened, so you know it's extra cringe-inducing. Mmmm, the sweet taste of regret.

3) MamaPop got a facelift, dividing content into pop culture and gossip and community. We've brought on a veritable fleet of new writers (meet them here! follow, bookmark, stalk!) who will mostly be covering the badly-dressed/behaved celebrity beat but we didn't want all the good TV/movie/general-geekdom posts to lose any time on the main page. So Tracey entered some kind of underground coding bunker and VOILA, two weeks and three nervous breakdowns later we have a handy new landing page for people who fear change to complain about. (Though you can still view things old-style by topic here and here.)

4) Jason had an after-work party thing at Dave & Buster's, and I had the stupid idea to take the boys over after Noah was done with school. I contracted at least five stains of the flu and won a GIANT yellow stuffed duckie from one of those claw machine games and NOBODY CARED. Or was suitably impressed. Noah said it scared him and Ezra hugged it for exactly 30 seconds before hurling it to the floor and stepping on its head. Stepped on! MY MAJOR AWARD! The brief outing ended as these sort of things always do: with Ezra puking up French fries all over himself and Jason. We came home and Ceiba decided that the giant yellow duckie makes a nice bed. I put it on the couch in front of the window so all the neighbors could see and be jealous, but I still haven't been invited to a single dinner party. Assholes.

Well, even sick, you already made me laugh with the threat of being sneezed on! I hope you feel much better very soon.

Oh, feel better soon. No fun being sick on the weekend.

Dude - total congrats on the major award - those claw machines always feel like a SCAM so I'm impressed that you won a big giant duck. I suck at cooking but I'd have you over for liquid dinner party if you lived on the west coast. :)
Feel better soon!

Dave & Busters freaks me out. But I am very impressed by your duck snatching skills.

Feel better and have a great weekend!

I'm sure the duck was totally sent to the claw machine in a box with that french word, "fra-gee-lay" written on it...

Props to you for voluntarily going to D&B. That place is a nightmare, & I don't even have kids.
Also, feel better. Because if you do then that gives me hope for kicking this 2 week long run of sniffles & ear hurting-ness & possible leg loss.

Almost 4 years ago I moved back to my hometown to be closer to my aging parents. And still, when I get sick my mom doesn't come over and stroke my hair and make hot tea for me and tuck me in. Something about not wanting to give my ailing father a good chance to get sick or whatever - I'm sick!

Hey, I've never won shit from those claw-thingy machines so well done to you, am mighty proud of your success!!

Sorry about the cold, that sucks. I'd totally be blaming it on that trip to Dave & Buster's. Feel better soon!

Feel better! I secretly sometimes love getting sick because it gives me a REAL excuse to be lazy and lay in bed ALL DAY. Okay, maybe that wasn't so secret.
Oh, and photo of giant duckie please.

Ahh -- my husband and son had something similar last week. It didn't last long. Hope you feel better.

I believe your neighbors have been silenced in jealousy of your large, yellow award. I think perhaps you should remove since they can't possibly invite you over now - you're a winner and, well, they aren't. They may not let on that they know this but just revel in the fact that they do...they really do.
You're even hilarious with a fever! T.S. Eliot believed he worked best with a head cold. But then he's dead so maybe that wasn't quite the "buck up little soldier" I was going for.
Feel better!!

Jason is going to "accidentally" knock the duck over while watering the plants. And the duck will die. And he used up all the glue ON PURPOSE!

I'm sorry you're sick :( Hope it passes quickly and you're able to attend all of the surely forthcoming dinner parties...

Tis a sucky thing to be a sick mother. :(

I'm one of the new MamaPop writers! It should be a blast.

You just seemed to be confronted with sickness wherever you go!

Good point! Why are us mothers not brought our blankies and Get-Better-Pops when we're sick? Or better yet... just the kids out of the house for an hour for some rest. Ah, a woman can dream, can't she?

the most shocking thing in that whole post was learning that D&B still exists.

I love the pictures on the slide!