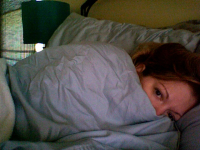 I have the sniffles. And my ear hurts. And I think my leg is asleep. Or maybe it fell off. Too weak to check. Where's MY comforting lap and Taggies blanket, dammit? Huh? Well? I am waiting. I feel like Fridays have been getting a little cop-out-y lately, since it's where I pile up all the links to other things I've written this week but was too shy to tell you about in a timely-yet-contractually-obligated fashion, so let's just make a deal right now: The first person who complains gets sneezed on. 'Kay? Moving on. 1) Remember when I was pregnant and used to talk about puking all the time? Non-stop, constant, always with the day in and day out barf talk? Good times. You can totally go relieve those times at Bounce Back this week. 2) This week's Isn't That Special column is a story I was too embarrassed to tell you guys back when it happened, so you know it's extra cringe-inducing. Mmmm, the sweet taste of regret. 3) MamaPop got a facelift, dividing content into pop culture and gossip and community. We've brought on a veritable fleet of new writers (meet them here! follow, bookmark, stalk!) who... Read more →

MEET MAIL SLOT. IS EVIL. IS MY NEMESIS. OMGOMGAAAAAHHHHRRRRFFFFFFFFFOMG PERIMETER BREACH. PAPER FALLS FROM SKY. THE APOCKOLIPS IS NOW. AM CLEARLY LAST LINE OF DEFENSE. I GOT YOU GLOSSY JUNK MAIL OF DOOM. SECOND WAVE! HOLD THE LINE! MY GOD, IT'S A CATALOG! WILL KILL US ALL! OH THE HUGE MANATEE! I EAT YOUR CREDIT CARD STATEMENT. I EAT IT UP. Epilogue: She dragged a dental visit reminder postcard about two feet to the left before getting bored, then went upstairs and took a nap. *** This post was sponsored by Milk-Bone and is my final contribution to the It's Good To Give Series. Thanks for the good times, Milk-Bone. And the memories. And the monies. Check out their Canine Assistants program on Facebook, which helps people with disabilities and get involved by sharing photos of your own dog on the Milk-Bone Flickr stream. Read more →

Allow me to present definitive proof that the public schools are turning the hearts and minds of our children against us. EXHIBIT A, which came home in Noah's backpack late last week: EXHIBIT B, which came home yesterday, thus cementing the fact that this is officially a pattern: If, for some reason, you are not super-experienced when it comes to deciphering preschool crayon scribblings, I present an enhanced and annotated version: WHAT ARE THEY TEACHING THIS CHILD AT THAT SCHOOL? I swear to God, if I find out that next week's field trip to the farm is actually a volcano discovery mission, I am homeschooling from now the fuck on. Read more → 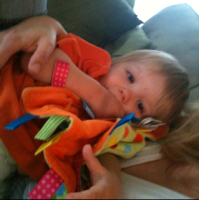 ...all the big boy haircuts and independent streaks are no match against a little case of the sniffles. Read more →

WELL? DID WE GO THROUGH WITH IT? DID WE CUT HIS HAIR? (Yeah. I sometimes like to pretend that my life haunts your dreams and consumes your every waking moment. Humor me.) Anyway. Yes. It happened. We did. Uh-huh. It is. I know! (And I sometimes like to type as if you are a real person asking me real questions that require real answers. I do not believe I have an unhealthy relationship with the Internet at all, no.) Ezra and his dapper haircut beg to disagree. Here he is, no doubt Googling some relevant articles from more reputable websites. Here it is, Mom. According to WebMD, You have a number of serious problems. Yet I get the sense you are not taking your serious problems seriously. I better show Dad. Or Twitter. Trust me, I'm a professional. Just look at the hair. Also: the digger on my shirt has buttons for wheels. Now stop weeping over that creepy envelope of baby hair they gave you this weekend and fetch me some juice. Read more →

There are official tentative plans to de-mullet the baby this weekend. Although I should probably make some official tentative plans to stop calling him "the baby." But just like how Jason and I both conveniently forgot to remind each other about last weekend's haircut plans, I won't follow through, so why bother? I mentioned his vocabulary in this week's Cafemom column, and he's easily added at least three words since that last count. He also will respond to a request to "raise the roof" with putting his arms up and...well, raising the damn roof. He brushes his own teeth, cleans up his messes and pitches a holy fit if denied an opportunity to carry my keys around, and yes, I have a decoy set I try to offer -- one that DOESN'T flood the neighborhood with the constant beeps of remote locking/unlocking/panic-button -- and yes, he knows there's a difference and will have NONE OF THAT. His scars from the escalator accident are healing, albeit slowly. Any residual fears from the escalator accident healed much faster, because he remains as bold and brave and reckless as ever. His favorite thing to say is "OH WOW," which is pretty much how... Read more →

(Please Nobody Tell Her It's Technically a Cat Bed)

WELCOME TO MAH BOO DWAR, PEOPLES. (YAWN.) YOO KNOW, IS GETTING DIFFICULT TO KEEP YOU ENTERTAINED WITH PHOTOS OF ME ACKUALLY DOING THINGS. I DON'T DO MANY THINGS. I MOSTLY DO LOTS OF THIS. AND THIS. SOMETIMES THIS, IF UR NASTY. I REGRET MY LIFE CHOICES. OKAY IS IMPORTANT SEVENTH-NAP TIME NOW. GOING WAY. BYE. *** This post is sponsored by Milk-Bone as part of the "It's Good To Give" series. Check out their Canine Assistants program on Facebook, which helps people with disabilities and get involved by sharing photos of your own dog on the Milk-Bone Flickr stream. Read more →

DAMMIT, SELF. There was this other story I meant to include in yesterday's entry, but I completely forgot about it until a comment by Julie triggered my memory. And then I went and told the story (kind of ) in the comments section, which was DUMB because it's a GREAT STORY and deserves BETTER, especially because it involves me GETTING HURT. So if you haven't read the comments section: Good. Don't. If you have read the comments section and already know about the story I'm going tell: *waves hand mysteriously* (I just erased your memory using the Force. Did it work? I bet it totally worked.) Last week Jason and I were outside on the back deck, dueling via the Lightsaber app on our phones. (BECAUSE OF COURSE WE WERE.) "Dueling" mostly entails waving your phone back and forth a lot and pretending to block your opponent's imaginary lightsaber blade. It's kind of like playing on the Wii, only with way less dignity. Anyway, we were getting pretty into it (OF COURSE WE WERE) but were also sitting way too close to each other, so after a few minutes Jason swung his phone down wildly and *CRACKCRASH* whalloped the side... Read more →

Despite Noah's initially-underwhelmed reaction to Star Wars, I must now report that we are in the grips of full-fledged mania over here. His obsession grew with a slow burn: When offered the choice between going to bed and staying up late to watch The Empire Strikes Back, he picked the obvious and obliged us with an occasional glance at the screen. But then he haggled with us repeatedly over the next few days for a similar Return of the Jedi deal. And it was at some point during this film that his inner geek was truly awakened, and we have been pretty much All Star Wars, All The Time ever since. I can't complain: I seem to distinctly remember talking about watching Star Wars with our unborn child no more than 10 minutes after peeing on the stick. It Is Kind Of My Thing, as long as we pretend that the three prequels didn't happen, because they make me unreasonably angry, as did the dumb "special edition" re-releases with extraneous CGI banthas and shit, I don't WANT extra CGI banthas, I want my childhood belief that three-inch models on string were totally giant ships in outer space and I want... Read more →

I Shall Rent It Out For Weddings & Make My Fortune

Old n' Busted: the Ball Popper. New Hotness: THIS SHIT Because let's face it: Kids like bubbles way more than you like sitting there blowing them. Over and over again until your hands are all soapy and your knuckles are scratched up from constantly trying to dig that little annoying wand out of the bottle after it slipped out of your fingers for the millionth time and every other attempt is a dud that produces no bubbles and ladies and gentlemen, THOSE DAYS ARE BEHIND YOU. THE FUTURE IS NOW AND IT INVOLVES BATTERY-POWERED BUBBLE MACHINES. You may be tempted into thinking that a million bubbles is enough, and that a gazillion bubbles is just marketing overkill. Don't be fooled. I counted. After a million bubbles we were only having about one-hojillionth of the fun we were having after a gazillion bubbles. That means you're technically getting about four squidillion times the fun for only about $4.99 more. (This is Noah setting things up so the slide would be like a "car wash.") (This is Ezra eying the thing warily while Noah busts some bubble kneecaps.) (He calls them bubbas. It's awesome.) Another plus: since bubble solution is mostly just... Read more →