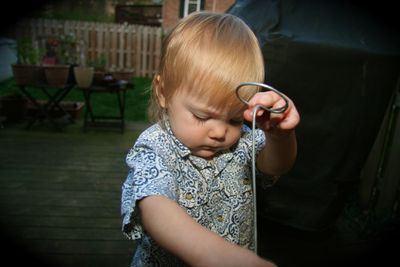 There are official tentative plans to de-mullet the baby this weekend. 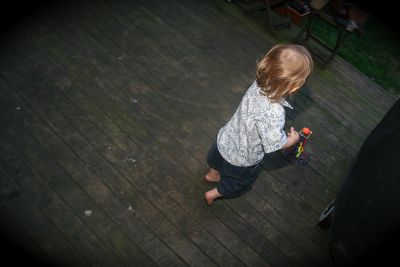 Although I should probably make some official tentative plans to stop calling him "the baby." 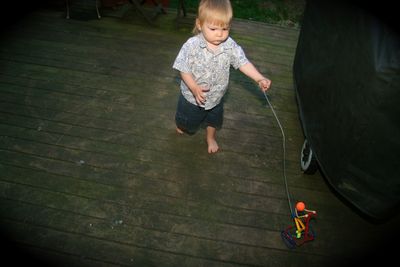 But just like how Jason and I both conveniently forgot to remind each other about last weekend's haircut plans, I won't follow through, so why bother? 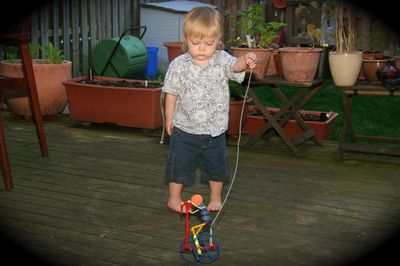 I mentioned his vocabulary in this week's Cafemom column, and he's easily added at least three words since that last count. He also will respond to a request to "raise the roof" with putting his arms up and...well, raising the damn roof. He brushes his own teeth, cleans up his messes and pitches a holy fit if denied an opportunity to carry my keys around, and yes, I have a decoy set I try to offer -- one that DOESN'T flood the neighborhood with the constant beeps of remote locking/unlocking/panic-button -- and yes, he knows there's a difference and will have NONE OF THAT. 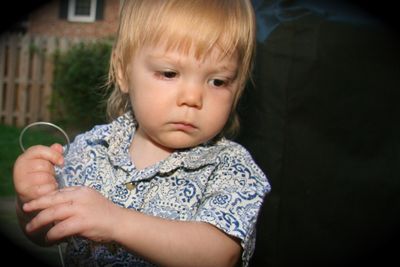 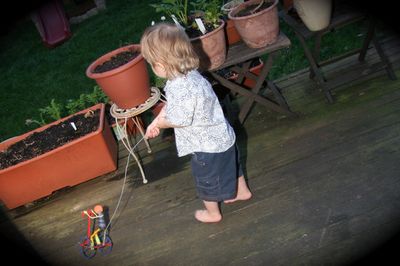 PS. Still. HAIRCUT. Hold me. They've been traumatic in the past, is all.

PPS. Yes, am working on the ProjRun finale recap for Mamapop. But I apparently wrote all my notes in some strange foreign language. Either that, or I wrote them at one in the morning after too much red wine. But let's go with the speaking-in-tongues theory.

Good luck with the haircut! And I love the Lewis Carroll reference!

having recently demulleted my own baby, DON'T DO IT!! All of a sudden, he'll be chatting up girls on the playground and wanting to borrow the car. It's all downhill after the baby curls are gone.

Such a cutie. And how wonderful that he is wowed by so much. That's something I wish we all held onto post childhood.

Oh, the baby. My 2-yr old is still the baby. Wait, he's 2 1/2 now. WAAAAAHHHHHH!!! Doesn't help that big brother is starting Kindergarten in the fall and is all skinny knees and potty jokes and won't let me give him a proper mama bear hug and a smooch. So I'm afraid the baby will stay the baby for a while longer ...

OMG he looks like a little Noah in these pics! Adorable, mullet or no mullet!

I still call my 4.5 year old my baby and probably will for the rest of her life. I think she likes being my baby, or at least that's what I tell myself.

Aaaw, I don't think you should cut his hair. I think the length is precious.

Oh noooooes...I am still traumatized when I think back to my baby's first haircut. He's 10 now. I have an 11 month old who currently has us in this same predicament...cut off the unruly, sometimes downright trashy looking reddish/brownish curls? I can't do it. Not yet. I will definitely be sending you some positive thoughts this weekend. I know this is not going to be easy! And hey, I for one will not judge if you forget to take him!

How does he like that bike dude? I bought three, one for each of my nephews & niece, last Christmas, but later convinced myself that they are all too young and would just destroy it (seemed more fragile than I was expecting) so I've held on to them for now.

My little brother - the youngest in our family - is still referred to as "the baby".

Amy, did you get that boy on a bike toy from a Ten thousand Villages fair trade store? Cuz I volunteer at one here in Canada and we totally have those exact same toys! Small world!

Awh, he's still the baby! Don't stop calling him that. And don't cut his hair! It is precious right now, and once you cut it, it's all gone. No going back. Done. Over. Fin.

(and I have the same issue with my 18 mo boy...beautiful curls are starting to look wild and umm...but, NO no no! I won't do it yet. So, I understand the struggle.)

Glad to hear it about the escalator followup. And...I hate to say it...but his mullet is getting into Billy Ray Cyrus territory. Good luck with the haircut.

My 12 month old's favorite phrase is also "wow". And "oh wow" if it's especially wow worthy. It may be the cutest thing ever in the history of the world.

I agree - don't rush into cutting the mullet. Wait until it gets officially un-cute and then take lots of pictures for future blackmail.

Too, too cute. And VERY intent on that bike toy. Don't worry, he'll always be the baby. Though you may not want to mention that to him between the ages of 6 and 30 though....

Good luck with the haircut but we'll understand if you don't. Won't change the nommable factor one bit.

I definitely support your speaking in tongues theory! you have a lot on your plate girl.

I don't envy you guys having to cut the little fella's hair. Poor Jason :-) Also, you know, Ez might always be the baby. When he's completely grown up (and maybe towering over you - don't flip out!) he'll still be your baby.

And OH WOW. He's adoooorable, mullet or not.

"...to talk of many things" You know cabbages, kings and whatnot. That sort of shit.

Wait there was a real purpose for this comment than to quote Lewis Carroll. Oh yes. a) Your baby won't look like a baby anymore and that saddens me and b) ETHIOPIAN, WOMAN.

I totally call my 2 yr & 8 month old 'the baby' - so much so, that when he saw a picture of himself with his daddy (a RECENT picture, mind you) he pointed at himself and said, "Baby." He totally thinks his name is Baby.

What is that toy he is playing with!? I must have one!!!

Does the baby have an opinion about his hairdo? I think you should let him in on the decision.

Ah. The baby mullet. It's so hard to let go. My daughter has been sporting it in some form for almost two years while I try to get her hair to grow out.

I can't wait to see the new haircut. :P

My Mother-in-Sin watches my 14 month old once a week for a few hours, and I just expect him to come home bang-and-mullet-less now. It's a little sad, and he looks a little too dutch-boy for my taste, but it takes the responsibility off my shoulders. Neither me nor my boyfriend has any inclination to cut it.

we de-mulletted our little guy last weekend. and it made me cry :-( and now my baby boy looks SO GROWN UP. he's still adorable, but definitely not very baby-like. good luck with the haircut; I can't wait to see the "after" pictures!

Aww. My nearly-18-month-old's favorite phrase is "oooh wow" too. The accompanying face is just the best thing ever.

And why is it that the boys are always the ones with the hair? My little girlie is SO FAR from needing a haircut.

Hey, quick, waaay off topic, question. How did you do that to your photos? With the blackout round edges? Just wonderin..

Please, we still call our daughter the baby, and she's FOUR:)

What a cutie! He will look so grown up! I will look forward to seeing his "after" picture :).

Can't wait to see the haircut!

look. i feel your pain. my son doesn't have proper, clinical, sensory issues but he is a profoundly finicky drama queen and that first hair cut.... well, it was 3 yrs before we went back for round 2.

so i put off the first haircut for #2. no way. i was NOT going through that again. but what happened was that she saw daddy getting his hair cut and screamed until she was put in the chair, snatched the hair-thingy smock and stuffed it around her own neck and then sang twinkle twinkle little star throughout her first haircut before squealing with excitement at her "new look".

it could be really different this time.