One of my mom's favorite Young Amalah anecdotes is the time I very seriously announced, as if I'd just finished several years of clinical research into the subject, that I was "not an outside kid." I was an "inside kid," and planned to live my life accordingly, finally at peace with who I was. (Of course, I was also "not good at sports" and "dreadfully uncoordinated" and "couldn't kick/throw/catch/block a ball if my life or straight-A report card depended on it," but I guess I thought my declaration sounded a little better.) Toward the end of yesterday's field trip to the pony farm, I turned to one of Noah's teachers and admitted that "I don't really 'do' the outdoors." Complete with inflected air quotes. I had an appointment for a haircut almost immediately after and apologized to my stylist in case I smelled like a barn. (She insisted I didn't. She was just being nice.) The temperature shot up to the mid-90s just for the occasion (seriously, I was wearing a sweater on Monday, and I'm pretty sure this afternoon's Water Day at preschool is going to get canceled because it's too chilly), and there's just no way to spend... Read more →

Left To My Own Very Limited Devices

Jason's been away on a business trip. It has taken every ounce of restraint I have in my system to not be complaining constantly about this. I remind myself about the single mothers, the divorced or widowed mothers, the military mothers, the mothers with husbands that travel all the time, for weeks and months at a time. And how many of these mothers have a shitload more children than I do and no part-time babysitter to help out during the day and no webcams and Skype so their children can spend an hour or so shrieking at Daddy while Mommy makes dinner and/or single-serve cocktails in the other room. Yes, I remind myself that my life is not very hard at all. And I even completely believe that. AND YET 1) Jason accidentally packed my phone charger, and 2) GAAAAAAAAAAAAHHHHHHHHHHHHHHHHHHHZZZPPJFFFBBT Yesterday, after picking Noah up from school, I did that thing where I actually counted the number of hours to fill until bedtime. Four and a half. Not bad. Not bad at all. Easily achieved with the help of: 1) One episode of Yo Gabba Gabba with a Wonder Pets chaser, 2) Slipping some broccoli into the macaroni and cheese... Read more → 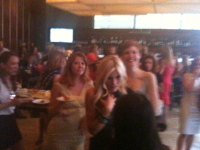 On Friday night, I went to a party. A non-kid-birthday, grown-up-fancy party! And I, of course, proceeded to act like a toddler the entire time. Part the First: I decide to wear my new shoes. I attempt to drive a stick shift in my new shoes. Six blocks and three stall-outs later, I kick them off and drive barefoot instead. Part the Second: I arrive early because I am a blogger of considerable influence who is also Internet-Friends with one of the VIP guests, Laura Bennett of Project Runway/Daily Beast/Your Local Bookstore . I bump into the person who invited me in the first place, give her an awkward hug of thanks...and accidently stomp on her bare feet with -- oh my God -- those stupid fucking shoes. Part the Third: I attempt to give Laura directions to the event via text message, belatedly realizing that my phone auto-corrected my mistyping of "Elm Street" into "Elmo Street." Part the Fourth: There was wine. It was free. Part the Fifth: Socialite/Professional Fancy Party Person Tinsley Mortimer was another VIP. Laura and I decide to get our picture taken with her. She's busy holding an interview, but we don't let that stop... Read more → 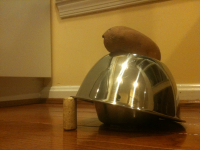 So about the mouse. It continues to elude Max's completely uninterested clutches, and Max continues to not give a flying fuck. Last night Jason and I heard something crunching on kibble in the kitchen, along with a metallic clang -- like one of the pets pushed the food and water bowls together while eating. Except that -- you guessed it -- both of the pets were sitting on the couch, with us. Jason jumped up and cautiously peeked around the doorway, but the intruder was already gone. I proceeded to have a full-body attack of the itching creepy crawlies while Jason checked the humane traps (I KNOW, OKAY) that he'd placed behind the stove at the assumed point of entry. The good news is that a mouse had gone into the trap. At one point or another. The bad news is that he'd clearly had no trouble CHEWING HIS WAY OUT. "So, that's that." I said. "We'll get some nice toxic traps that break their backs or fry their brains or something, right?" He mumbled something while opening cabinets and pulling out casserole dishes or whatever and I went back to the living room. Turns out? Jason had a plan.... Read more → 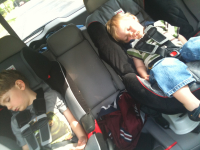 Sometimes I still wonder what it would be like to have a daughter. Usually while passing through the girls' clothing section -- the dresses! the tights! the...oh, just the EVERYTHING! -- on my way to buy generic truck t-shirt version number 437 off the sale rack. Sometimes it's while watching Jason gleefully rip open the packaging of Noah's first Transformer or win an eBay auction on the exact same Star Wars playset he had as a kid. That's when I remember that I still have a full and complete set of the original Strawberry Shortcake figurines in my parents' attic, and that my Rainbow Brite was still in remarkably good shape the last time I went through the boxes. Not that our toys are all so strictly, intentionally gendered. We have baby dolls and a tea set and Noah's a huge, huge fan of both The Little Mermaid and Princess and the Frog and owns quite a few toys from both, most recently the Princess Tiana beach towel that he chose over the Cars and Toy Story versions. Ezra's favorite toys are his doll stroller and a set of plastic pots and pans. But still. They are SUCH BOYS. Noah... Read more →

The Tail of the Cat

I really struggled with yesterday's post. I almost abandoned it completely several times, thinking that maybe I should just publish some "before" photos from the party and keep my trap shut about the dropped bunny and turtle bit -- my big trap in which I keep my COPIOUS ANGST -- instead of putting that story out there. I didn't want to paint Noah as some kind of heartless monster, or make it sound like I thought he was, OR make it sound like I didn't get that his behavior was unacceptable and that petting zoo guy was SO WRONG about my preshus snowflake who is allowed drop-kick any animal he wants because: snowflake, my preshus. But honestly, I knew I wasn't going to stop obsessing about it until I wrote it out. So I did. Also related the story to his teachers after school, who could not have been more nonplussed about it. This just in: Four-year-olds are just impulsive little shits sometimes. Jason, oddly, remained unconvinced and thoroughly concerned. "He's shouldn't have laughed," he said. "He should be able to empathize." "Not until age six," I said. Jason didn't respond, but waited for me to cite my sources. "according... Read more →

Birthday parties. What in the world is it about the stupid BIRTHDAY PARTIES? We've gone to a few very successful birthday parties since, well, the very unsuccessful ones. I've gotten selective about which ones we attend -- if it seems like a low-key affair at your house, yes. If it sounds like something with a lot of structure and set activities, I usually decline. We went to a party this weekend. At someone's house. It was big yet fun and low-key and full of general mayhem, in a good way. There was also...a petting zoo. It was so cute! So fun! Delightful! Some ducks and chickens and bunnies and a pony whose head barely reached my knee (but whose penis practically touched the ground and I'm sorry I can't help but notice it I mean look it's right there and it's huge OMG). Noah initially resisted the call to round up around the enclosure and meet all the animals, but by the end of the handler's introductions he was begging to have a turn inside. He stepped in and accepted a lap-mat of some old carpet and the tiniest baby bunny ever. He held it gently and giggled and declared... Read more → 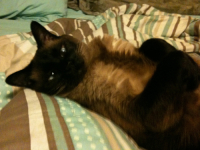 We need to talk. Oh, don't look at me like that. You know. YOU KNOW EXACTLY. Look. Cat. You've been a fine cat. For almost...wow...12 years now, you've been a very fine cat. Very affectionate and cozy and face-nuzzly and such. And I can't tell you how happy I am that you remain so healthy and spry and feisty after almost 12 whole years. Like the other night? When you were rolling around on the bed being all adorable and I decided to record a little movie of your adorableness but the dog felt all left out and whimper-y on the floor so I picked her up and put her on the bed and you were immediately all OH HELLLLLZ NO BITCH THIS BED AND TUMMY RUBBIN IS MINE and proceeded to lunge at her head like a cheetah in a nature documentary? Exhibit A: Yeah, that. While not the adorable pet video I originally had in mind, I was still pleased to see you can still get all aggressive and feline-like, when you feel like it. Which brings me to my point: If you're still obviously so up for a good tussle, why the fuck do we have a... Read more →

Posted at 11:07 AM in houseness, Maximillian Thunderdome, suburbification | Permalink | Comments (66)

And Now Back to Our Regularly Scheduled Life of Glamour, Grace & Class Out the Wazoo 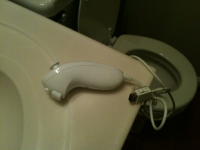 FOR SALE: One (1) Wii Nunchuk, gently used. Mostly as a fishing pole. Don't ask. Asking: $1, handful of Clorox Wipes, OBO. (New post up at The Stir, all about our battle with Noah over forks and spoons and the next fancy bit of electronics that will likely end up in our toilet. It is just our way.) Read more →

What I Have Done Today To Make Me Feel Proud

Since there was a small handful of requests, I bought these shoes on Mother's Day. I also bought...a pair of running shoes. Last year, after Blogher, I kept seeing pictures of myself crop up on Flickr and Facebook that made me cringe, a little bit. My chin, my face, my arms...everything was a bit rounder and softer, at least compared with the photos from previous years that occasionally popped up out of order, for side-by-side comparisons. I told myself that I was simply not photogenic, and holding on to 10 pounds or so because I was breastfeeding. By January, when we went to Jamaica, I was most definitely not breastfeeding any more. But the pictures looked worse, not better. I deleted most of them: practically erasing my presence from the greatest family vacation we've ever taken, save for a small handful of pictures that happened to be taken at more flattering angles. Or from far away. There was no way around it: I'd been slowly but steadily gaining weight since Ezra's birth, instead of the other way around. Not a lot, oh, not really a whole lot. But enough. Enough to make me delete myself from the memory card, to... Read more →