One of my mom's favorite Young Amalah anecdotes is the time I very seriously announced, as if I'd just finished several years of clinical research into the subject, that I was "not an outside kid." I was an "inside kid," and planned to live my life accordingly, finally at peace with who I was.

(Of course, I was also "not good at sports" and "dreadfully uncoordinated" and "couldn't kick/throw/catch/block a ball if my life or straight-A report card depended on it," but I guess I thought my declaration sounded a little better.)

Toward the end of yesterday's field trip to the pony farm, I turned to one of Noah's teachers and admitted that "I don't really 'do' the outdoors." Complete with inflected air quotes. I had an appointment for a haircut almost immediately after and apologized to my stylist in case I smelled like a barn.

(She insisted I didn't. She was just being nice.)

The temperature shot up to the mid-90s just for the occasion (seriously, I was wearing a sweater on Monday, and I'm pretty sure this afternoon's Water Day at preschool is going to get canceled because it's too chilly), and there's just no way to spend a few hours in a barn in that kind of heat and humidity and leave un-stankified. I glanced down at my cleavage at one point (why? I don't know. because I'm just so into myself?) and saw that the sweat had literally formed a small pool in my bra, which I guess had already absorbed the maximum amount of moisture.

The kids got to cool down by bathing a pony and playing with buckets of soapy water. A teacher recommended that we all join in because the water really felt nice, but I took one look at the sponges the kids were using -- sponges that were COVERED and EMBEDDED with hair from various farm animals and kind of reminded me of what a household sponge looks like after you use it to clean behind a toilet -- and opted to simply stand off to the side being miserable.

Okay, not really. I was the event photographer (self-appointed, but whatevs) and was busy taking pictures. 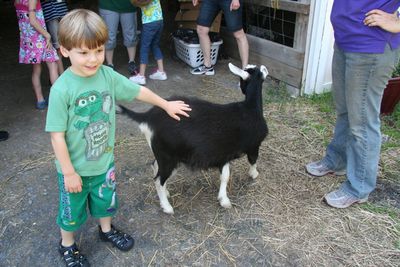 Noah kept calling the goats "ponies." After being corrected a dozen or so times, he finally compromised and referred to them as "pony-goats." 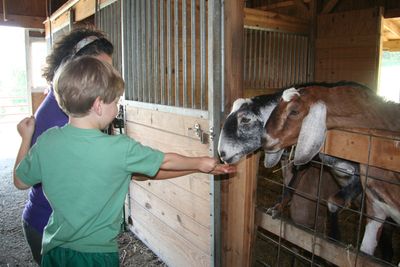 Much like our waffle-crazy dog, these pony-goats would sneeze excitedly at the prospect of grain pellets. 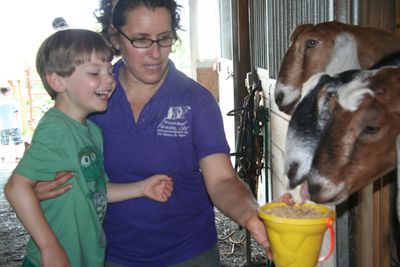 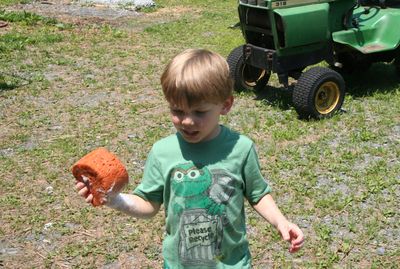 (Seriously. I cannot even look at photos of those sponges without a dose of hand sanitizer.) 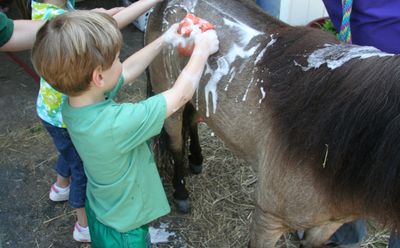 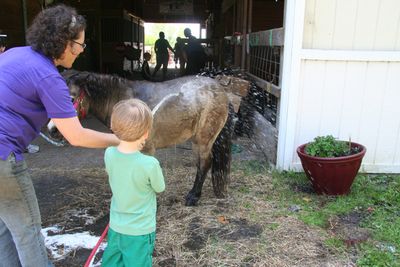 (Please note the YELLOW BARN, as in NOT RED. Noah took one look as we drove up and wailed "Why do you keep DOING this to me?" from the backseat of the car.) 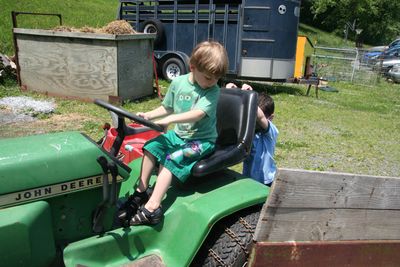 On a somewhat alarmingly in-working-order tractor that I'm shocked no one figured out how to hot wire. 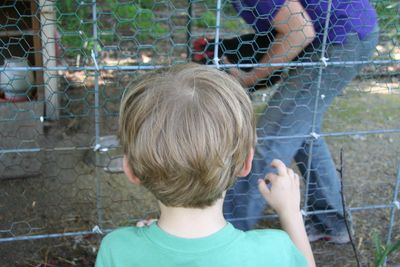 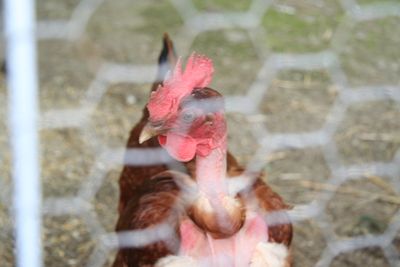 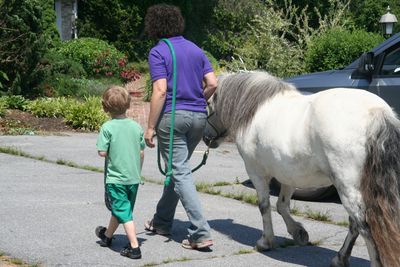 Everyone got a chance to take a pony for a walk around the parking lot and learn a couple basic commands ("walk on" and "HO"). 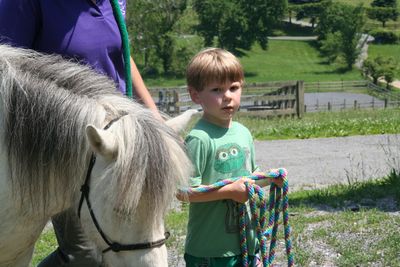 Noah took this job very, very seriously, although he kept saying "stop, please" instead of "HO." I took my job as a chaperone very, very seriously too, so I promise I didn't make any jokes about the "HO" thing. 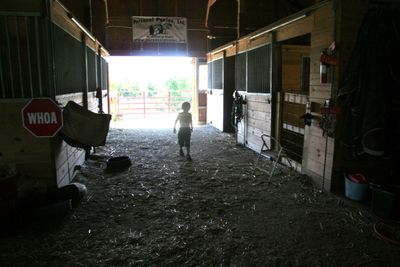 At least not out loud. Or within earshot of the children. Okay, maybe just that one time but I don't think anyone heard me.

PPS. New column at The Stir.

The sponge is almost as gross as the one our lunch lady used in high school, back in the 70s. I feel sick just thinking about it years later!

And that last photo? I keep expecting to see the General Lee drive into the barn for a Jessica Simpson carwash!

Aren't goats just the worst? On my brother's farm, they have two, and one of them is an asshole and my sister in law warned me, "He WILL try to have sex with you."
No thanks.
Noah is the cutest kid.
And yes, that chicken neck leaves me frightened and despondent.

Yea for Noah being SOOO great around the animals..?!

(I woulda dropped that bald neck chicken thing on its head. scary.)

I'm not sure what smells worse: farms or where I work. Probably a toss up depending on the day....

Bravo to you for braving the great outdoors! Noah looks like he is having a blast.

And I would have gone the 'Thundercats, HO!' route myself.

To be fair, Noah was promised a pony farm. He wasn't prepared to see non-pony farm animals, I'm sure. (PS - I work in agriculture and am pretty sure I can find you a red barn to visit if you want.)

Those donkeys look so adorable - especially as we can't smell them through the photos!

Those donkeys look so adorable - especially as we can't smell them through the photos!

Look at Noah being all responsible and cool. Yay for age appropriate animal activities!

:) I think they were saying "Whoa" not "Ho" to command the horses to stop. But you can keep making slut jokes anyway!

The chickens? Yeh, they're called "naked necks" literally. They're bred that way so it's easier to wring their necks when you kill 'em. We bought naked neck turkins (oh, you're gonna love this -- they're half TURKEY and half CHICKEN and they have a naked neck). I have no intentions on eating my naked neck turkins, I just think they're funny looking.

A farm visit is WAY more kiddie-appropriate than a tiny animal OMG DON'T TOUCH IT party.

Except for the necked (get it?) chickens. Those are wholly inappropriate for children.

I just have to share what's been keeping me up at night. My husband was telling me about Mike the Headless Chicken, which is a chicken whose head was cut off by its farmer and proceeded to live on for eighteen more months. The farmer took pity and fed it through its neck with an eyedropper. I can't stop thinking about this.

Noah's not into HOs? I put that in the category of "Good Things."

Having just been shown a video by my boss of some woman who is still breast feeding her 8 year old, my stomach was not prepared for Mike the Headless Chicken, thank you, tasterspoon!

Love all the pictures, but what is this thing about non-red barns? It should be illegal!

My parents live out in the middle of nowhere and a few years ago they built a pole barn, which isn't anything more than a free standing garage (aka another place to store stuff) and my mom insisted on making the siding red since barns are red. There was no changing her mind. So, Noah isn't the only one who insists on red barns. ;)

"Why do you keep doing this to me?"

kelly - nope, it was definitely HO. I guess our farms around here use a weird horse-dialect to go with our weird non-red barns.

I love that you are willing to proclaim your love for the in-of-doors. I tell everyone that I am not really into nature, and they look at me like I am crazy.

A friend of mine in DC realized her kid spent maybe too much time in the city when, on a trip, he saw a sheep and said, "Look at that funny-looking dog." I laughed heartily at that, but got mine back when my son said the same thing about a goat we saw a couple years ago.

Hahaha.. it seems like a red barn scouting mission is in order.

Pony-goats and "why do you keep doing this to me" were two of the funniest things I'd been told all day! Thanks!!

And I feel like I need a shower just thinking about those sponges! Yesch!

I loathe the great outdoors and the hub likes nothing better. Sigh. Great pics of Noah! How'd your hair turn out?

erm... yeah. I'm a Camp Marriott girl myself. Camping is all well and good. For Other People.

Yeah, tonight's not my night for mature comments.

OMG - I just lost my mind with the picture of that chicken. Seriously - the laptop was just passed around to my in-laws to see it as I laughed until I cried. Then there was the 'choke the chicken' comment that put me over the edge. Now I'm off to Google Image.

Ugh. The smell is awful. Used to work in a Horse barn and love it but the shower was very much needed afterwards!

True story: When we were in Nicaragua we ate mostly fish and chicken. One night we had meat and I said to the cook that I was surprised to see beef since the cows were so emaciated. She said (in Spanish but I'm pretty sure I'm right) that their sheep got their goat pregnant. The offspring didn't provide milk like a goat or wool like the sheep, hence we had sheep-goat for dinner.

My point? Find that pony-goat a good job, pronto.

Camping is great actually. I mean what is better fun than bein eaten alive by bugs, freezing to death at night and waking up in the morning with a sheep munching on your t-shirt (fond memories of my time with the scouts). Oh and not being able to wash for 10 days. The best. That sheep still owns me a t-shirt though...

Sadly, I know I need to suck it up and go outside for my daughter's benefit.