On Friday night, I went to a party. A non-kid-birthday, grown-up-fancy party! And I, of course, proceeded to act like a toddler the entire time.

Part the First: I decide to wear my new shoes. I attempt to drive a stick shift in my new shoes. Six blocks and three stall-outs later, I kick them off and drive barefoot instead.

Part the Second: I arrive early because I am a blogger of considerable influence who is also Internet-Friends with one of the VIP guests, Laura Bennett of Project Runway/Daily Beast/Your Local Bookstore

. I bump into the person who invited me in the first place, give her an awkward hug of thanks...and accidently stomp on her bare feet with -- oh my God -- those stupid fucking shoes.

Part the Third: I attempt to give Laura directions to the event via text message, belatedly realizing that my phone auto-corrected my mistyping of "Elm Street" into "Elmo Street."

Part the Fourth: There was wine. It was free.

Part the Fifth: Socialite/Professional Fancy Party Person Tinsley Mortimer was another VIP. Laura and I decide to get our picture taken with her. She's busy holding an interview, but we don't let that stop us. 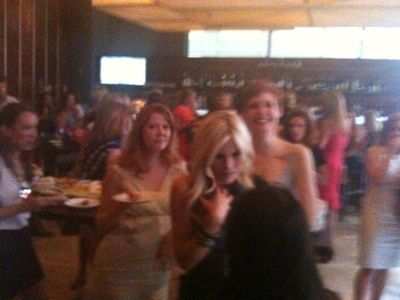 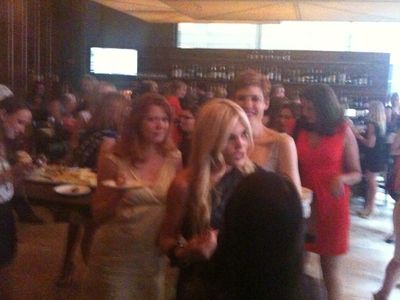 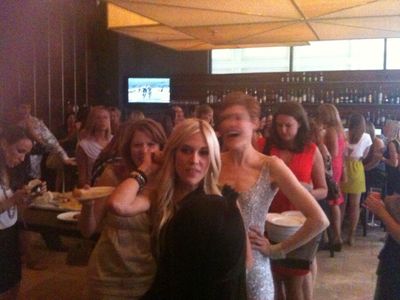 I put some pigs-in-a-blanket on my plate so our photobombing had a believable cover story. That was my plan, in case someone yelled at us for being obnoxious jackasses. "We're just here for the buffet, sir!"

Part the Sixth: At some point, so embiggened and boldened by our daring photo op with The Tinz, I just straight up ask Laura to make me a dress for MamaPop's Sparklecorn party. (In less grabby, selfish news, I'm giving away autographed copies of her new book instead. Whee!)

Part the Seventh: Some woman thinks I am Laura's assistant or PR person and tries to pitch me on...McDonald's franchises? Or something? I explain that I'm just a friend, so she says, "Oh, never mind, here, hold my book for a minute" and then pushes through to Laura directly. After a few minutes she realizes she wants her book signed and starts shrieking "WHERE'S MY BOOK? SECURITY TOOK MY BOOK!"

Part the Eighth: I give her back her book.

Part the Tenth: I forget my gift bag full of free hair products under my seat. I spend the next 20 minutes trying to figure out a way that this was Jason's fault, but cannot.

Part the End: I say goodbye to Laura and everybody else who tolerated my over-excited presence all night, wander around in search of some french fries, then almost leave my shoes in the cab. But I don't! So the evening ends on a high note, at least.

YES! I love that reference to Kelly Kapoor. :)

And that is all.

Oh! And you are fun.

Great job on the photobombing! Is Laura making you a dress? I probably owuld have asked for the one she's wearing; it's so pretty.

Awesome. Thank you for coming to THE FRONT ROW AT BETHESDA ROW, www.bethesdarow.com (there. I plugged. My job here is done).

My foot was totally fine. You were actually the first of four fabulously-shod women to step on my toes that night; yours was the least painful.

I love the part where you try to blame Jason. I would totally try to do that too.

so you drove there but took a cab home? Sounds like some good drinking at that party - you go girl!

Love the Office and love Kelly Kapoor!!! Also, Mindy Kaling is fun to follow on Twitter if you're not already! :)

True story: a couple years ago, I was Laura Bennett for Halloween. I found a Laura-esque dress, wore black stilettos, dyed my shoulder-length hair red, and I even had a bitty baby bump (that caused some confusion and concern when people thought I was actually pregnant and drinking). Even more badass? We ran into a Jeffrey and created a traffic jam as perfect strangers rushed up to take our picture.

I am not even a little bit embarrassed to admit that I am incredibly jealous of your friendship with Laura.

I am the last person anyone would expect to get starstruck about ANY reality television personality, but I have a thing for Laura. I just like the hell out of her and want to exchange regular snarky texts with her.

I think it sounds like you were the life of the party - they were lucky to have you there!

I, Laura Bennett, do solemnly swear that the recount of Fridays events are true and accurate. That is, without a doubt, pigs in a blanket on Amy's plate.

I took a look at the linked picture. The shoes of death are worth it.

Ha ha. I just shouted FASHION SHOW AT LUNCH to my husband last night when he was trying on his new suit.

Would have LOVED to have seen it all but really? You couldn't figure out how to make it Jason's fault? You have not been married long enough :-)

At least you knew who the famous person was (the Tinsley chick). I probably would have insulted her by being oblivious about who she is and then maybe asking her to hold my purse so I could remove gum from my shoe or something.

I went to a grownup party a while ago, but I kept jiggling--not in a cool way (if that's possible), like I was grooving to the jams--but in a way like I was holding a baby or two.

I do the same thing...I always feel the need to get some fries after a social event!

I am so hugely impressed that you party with Laura Bennett. I've never heard of the Tinsley person, though. Your shoes are Gunnworthy.

You're braver than I, to photobomb someone you don't know! Just the type of story I love reading about. Keep up the good words! (did you see what I did there? It's almost like a pun and stuff! I feel clever)

"Nightmare on Elmo Street"-- that's next on my Netflix list!

I agree that the photo link in the comments is a good one... but you are not named below it like everyone else is. You should totally try to get your name under like you are a socialite!

In other news, I have trod on MANY a feet in fancy shoes... I always feel so bad!

Saw the picture on the link - your shoes are amazing and you have such petite feet that anyone would forgive you for a minor foot mashing incident! Me in my size 10's...not so much!! (and it HAS happened).

I would love to go to a party with you. First thing to do is get you drunk and then release you for optimum damage. I will be filming the entire time, of course. :p

LOVE the photo bomb pic's!!! I was laughing so hard I almost spit soda on my keyboard! My other reason for commenting was to request photo's of the shoes but I followed a link and all is well.

Those are really f*cking hot shoes. Go you.

"I spend the next 20 minutes trying to figure out a way that this was Jason's fault, but cannot."

Heh. So frustrating when this doesn't work out.

I always thought you were uber cool...but the fact that you know and are actually friends with Laura (instead of just internet stalking her...like I internet stalk you..cough cough) essentially raises you to like cheerleader/dating football player/siting at the cool table at lunch status!

You drive to the party and take a cab back? How much did you have to drink?

sounds both gleefully fun and hilarious.

There are live traps that you can use--we use them all the time to catch mice. We've used ours for many years.
http://www.wildlife-traps.com/mice.html

Isn't it the more ridiculous the heels are, the cuter they are?

How did I not know Bethesda Row had events?

Damn. I would have been there, but I was preparing for my husband's Christmas party. (Yes I know it is May, but it was postponed).

Did you meet the Bethesda World News baguette? I heard he/she was there.

I thought you drove there -- and took a cab back? Good for you. When did you pick up your car? Did you get a ticket?

It looks nice party, I wish I was there.

You forgot the hair products?!? Nooooooooo!!!!!

Haha Amy, oh my. I recently started listening to John Mayer and I'm just letting the playlist run through.

A song starts up and suddenly my eyes fill up with tears and I start to think of babies. I am thoroughly confused - why does this song I've never heard before make me cry? "Oh say what you need to say..."

One of your videos!

Amalah. You have infiltrated my daily life. To the point that songs that are associated with your little boys make me CRY.

You made me CRY!

I just wanted to click the "remember me because I'm special" button. Oh, and to tell you that photo bombing is totally cool.

Taking note of your astounding post, I realize it is of the different skills and real options.Trust I will certainly get which I aspire from your ideas.Have a good one!