Indulge me, you guys.

For lo, my memory card reader has been lost for many, many days, trapping so many lovely photos from last week on my camera, because I am dumb and forgot that you can just stick a USB cable directly in the camera, like oh. Right. Technology! What a country!

Anyway, I'm on a very tight deadlines everywhere today because I promised to take Noah to see Toy Story 3 after lunch. He is LIVING for after lunch right now. It is the center of his entire UNIVERSE right now. He cried this morning when he realized that he could not simply eat a peanut-butter-and-jelly sandwich for breakfast and thus trick the space-time continuum into suddenly being "after lunch."

(He JUST became aware of the movie's existence earlier this week. He saw a commercial for it and seemed to think, at first, that it was one of the previous installments, but then that big number three appeared under the logo and he was all, "THREE? THREEEEEE?" He's been bouncing off the walls ever since. I foresee a lot of super-geeky camping out in lines in this fanboy's future.)

Anyway! Here are some pictures from Noah's end-of-school parties. They're really boring. But also cute. YOU WILL LOOK AT THEM. DON'T MAKE ME GET OUT THE SLIDE PROJECTOR. 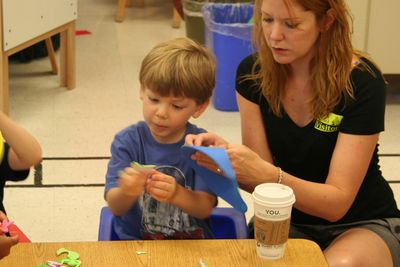 Attempting a craft at the first party. I look confused. This is probably accurate. 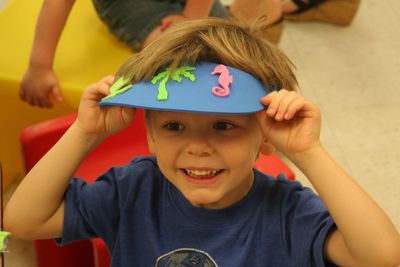 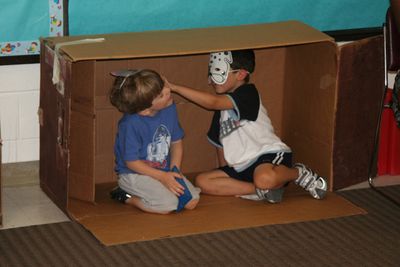 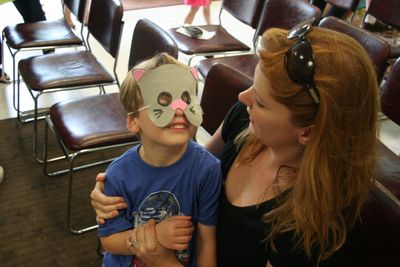 Last summer, this program succeeded in getting Noah to wear a hat. 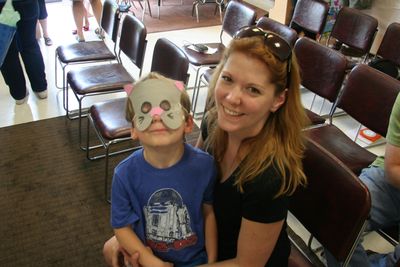 Hats! We already wore a hat today! NOW WE ARE WEARING MASKS ON OUR FACE. 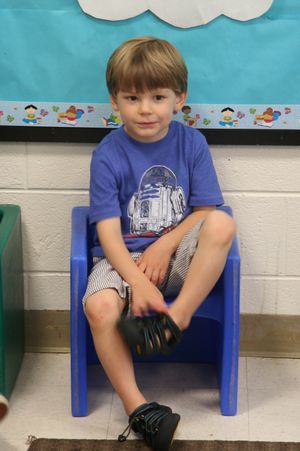 And sitting on chairs, looking huge and grown-up and so very deserving of an afternoon off with Mommy to see Toy Story 3. 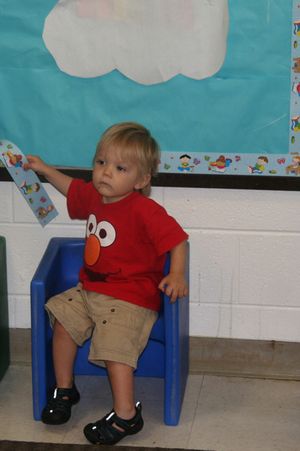 P.S. OH HEY THERE YOU THINK ANYONE WILL NOTICE IF I SNEAK UP HERE AND STEAL NOAH'S CHAIR WHILE RIPPING DOWN THIS BANNER ALL CASUAL-LIKE? WHAT UP LADIES I AM SO SMOOTH.

Ahh.. Ez. You are so adorable. Cannot get enough.

We were going to wait until next weekend to see "3", but the more I see the ads, and the more Sprite sees the ads, the more excited we both get. I may give in by tomorrow.
Wonderful photos. And such accomplishments! Way to go, Noah!

Seriously, can I just put all three of you here in my pocket? So stinkin' cute.

Congrats Noah on graduation or end of the year or stepping up or the party or whatever they called it.

And let us know how Toy Story is. We are making Michael wait until Sunday. We are horrible and mean parents.

I did read a warning about the scary danger parts and bad toys in this version, so prep the kiddies a little :-)

Awww. He's come such a long way this year. Do you need some tissues, because I think you've got something in your eye.

And, the t-shirts in the last two pictures? Sooooo cute!

I thought motherhood was supposed to make one look all tired and old. But you look FANTASTIC.

And your boys are so sweet and adorable. Great photos!

The pic of Ezra made me laugh...why is destruction so second nature to two year olds? lol :)

Noah looks like he is having a great time and I am so jealous that he gets to see Toy Story 3. I hope to one day be deserving of an afternoon at the movies myself! Have fun!

Awwww! We don't get to see enough pictures of you on this here blog, Amy. You are a cutie. And so are those boys!
And regarding Toy Story, I was just crowing to my fiance the other day that Toy Story is the only VHS tape I have kept through all these years. It's the special limited edition plastic package thing! It has gold shiny edging on it! It's totally a collectible!

I love pics of Destructo Boys. I have a few that went through that stage too.

And, way to go Noah. You've grown in leaps and bounds this year.

Congrats, Noah!
And geez, when did he get so darn tall?

Thanks for sharing your stories and always making me laugh (in a good way, I promise)!

The first thing I noticed was the hat. Then I was blown away by the mask! Wow! What a difference a year has made. Just think about all the changes you'll be looking back on next year.

He's had a great year!

This comment is about the shaving cream post: It totally is an SPD right of passage thing. KayTar used to react VERY negatively to it (see here, like puke from a little dot of it on her finger negatively...now she LOVES it. This is how I know therapy works. LOL.

I was driving to Wisconsin today to go outlet shopping - sounds so terribly far away, but it is really only about 30 minutes from my Chicago suburb - and I saw red barns, lots of them, all together! And I totally thought of Noah and his quest for the red barn! :)

noah is precious and OMG SO GROWN UP! but the p.s. for ezra made me laugh out loud. :-)

My daughter also tries to trick the space-time continuum. If something exciting is happening "after lunch," she will ask for Spaghetti-O's immediately after scarfing her breakfast.

He looks so grown-up! Thanks for reminding me that every "stepstone" can actually be a milestone, if that makes any sense.

I read that this was actually the best of the Toy Story movies and a real weeper, so I hope you brought tissues. Plus I love that the same boy/man has voiced Andy in all of the movies, so it's accurate. But I always love little movie factoids like that.

Perhaps - just perhaps - you could STOP your son from tearing down the banner instead of documenting his absolute cuteness and your selfishness in doing so.

-A teacher who puts these things up, knows they come down because kids are kids, but would not mind just a little cooperation from parents because these things are a PAIN and I'd like them to stay there for summer school.

I took a two year break from blogging. Last I read your blog your were pregnant! I got sucked back in.

Glad to be back reading your antics.

Damn, you look like Noah's 17 year old babysitter, not his mom! I want your genes.

Our kids wear the same shoes! How funny!

Oh wow I can't believe the not-so-imaginary authority figure "Jane" has totally busted you. That's a burned out teacher for you... completely spazzing about banner material stapled to a cork board. I have a 21 month old, and he would absolutely delight in ripping that down and telling me "NO" as I asked him to stop... and then running away from me if I took a step towards him. THAT'S WHAT THEY DO.

So I am not the only one who is always confused at school plays? The relief!

Cute pics - and for what it's worth - you look skinny as a rail.

Eh. Count your blessings that you didn't have the "Beach in a Bottle!" (!) craft at your end-of-school party. If I step on one more snail shell or piece of sea glass, a particular child is being sold. Right away.

Also, you look super skinny in these pictures. This whole running/getting exercise thing? You're starting to convince me there is merit in that somewhere.

I will always indulge your photo posts, especially as they come with such brilliant captions!

Noah is one handsome little man - you better watch out for all he girls that are sure to come knocking at the door.