Huddled at B&N again with, unfortunately, no wallet. Hiding behind a...pillar thing so the Imaginary Authority Figures don't catch me poaching free wifi despite not purchasing anything. Though I would love to purchase something! Maybe one of those Twitter marketing books could tell me how to beg for spare change. If every Rockville-based follower stopped by with a nickel I'd be halfway to a latte right now! Where are you assholes? God, but social media is useless.

I've now been officially singled out as an Old Timer at the drop-off and pick-up. Mothers are all but sidling up to me all, word on the street is that you've been here before and know a few things about this here special ed jungle. Can I get a preschool recommendation in exchange for a playdate? Who's your occupational therapist? Come on, man, help me out, I'm dying over here.

It's funny, but true. I apparently now give off the vibe of someone who knows what they're doing. Maybe I seem less...insane or high-strung or HI HI HI LIKE ME LIKE MEEEEE than I used to, or because I know all the therapists and counselors and even a few of the volunteers by name. Maybe it's just because I already know how to get that stupid fence open in the front of the building, no, here, you gotta lift that thingie like this.

Or maybe it's because Noah is now running around with his confidence going at full-tilt, laughing, riding bikes, talkingtalkingtalking, doing everything that everybody else wishes their kid was doing, everything that he WASN'T doing this time last year. A year of bumbling and fumbling has made us wise, completely by accident.

This morning I shook hands with a mother who has a brand-new PDD-NOS diagnosis and no earthly idea what to do next about it. She moaned out loud when she heard that Noah issues presented before he even turned two because her child is five already and they just found out and have lost so much time and I saw that overwhelmed, panicked look her eyes and I had no idea what to say.

So I said that I'd heard Noah and her son played very nicely together yesterday, and the words were only halfway out of my mouth before she asked if we could have a playdate. I said that would be awesome, let's definitely do that. I smiled, and so did she. 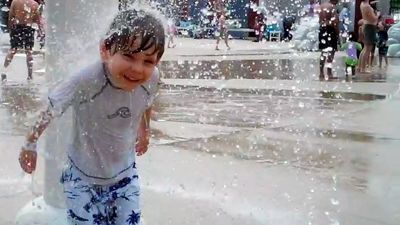 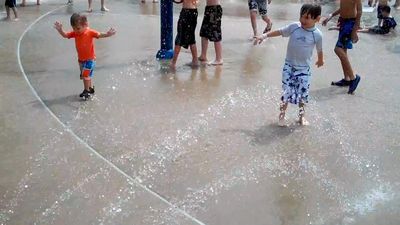 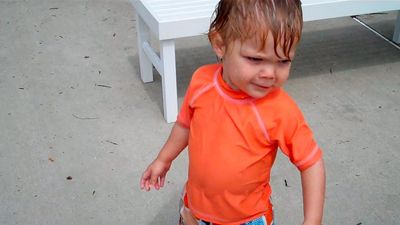 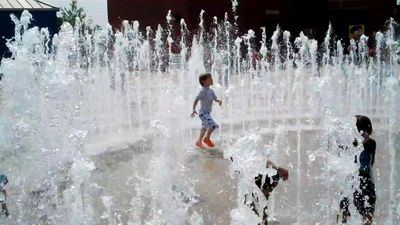 I'd stop by with a nickel (or even a latte) but you'd then know for sure that I'm a stalker.

I want to write something witty and funny, but I can only stare in longing at those fountains...

Oooooooh the handsome darling little Ez in the orange rashguard!!! ILOVE! What a frickin DOLL.
Am beaming with pride (which is strange? Because I've never met you/him?) for Noah. He's a rockstar! Go Noah and Go Mama!

Things sure look different from that side of the conversation, huh? Yay, Noah!

And Ezra definitely looks like a BassAss lifeguard, "Hey, you kids! KNOCK IT OFF OR GET OUT OF THE POOL."

I'm all verklempt. You done good.

Good goin'! I just know you made that lady's day.

Good goin'! I just know you made that lady's day.

I keep $10 bills stashed in both diaper bags and the glove compartment, because I forget my wallet *all* the time.

omg, is that the fountain in silver spring? I am so homesick :(

Where is that fountain? I'm coming to DC this weekend and need fun kid ideas. THAT looks like a fun kid idea.

Oops, PS. Your post is totally awesome. I am so happy for your family :-)

Oops, PS. Your post is totally awesome. I am so happy for your family :-)

My daughter has the same swim top as Ezra. I don't care if it's a boy's one: it looks super cute with her stripey orange-and-white swimsuit and her blonde pigtails.

Um. So there. Defensive, much?

It's nice to be the one who knows how to help others navigate their way through, isn't it?

What a blessing you are to that mother and many others: you KNOW stuff, you're passing that stuff on.
As you and Noah make your way through the journey, you've also become a guide.
My heart is soaring for you.

I'm so glad you're able to help other moms through your experiences. It's so wonderful that you all can realize - through one another - how fabulous your little kids are.

Hey, who's that grownup kid playing with Noah? Must be one of his new friends from camp. Wait, what? No....

Damn they grow up fast!

Where are those pictures from? I live in the DMV as well and that place looks like fun!

Where are those pictures from? I live in the DMV as well and that place looks like fun!

So happy that Noah is doing so well. I can only imagine how proud you & Jason must be. And I'd like to jump into those fountains!

Dude. You're like Yoda! The ways of camp show you them I will. Hmm. That sounded kind of LOLYoda. ANYWAY. (Congrats. :))

I live near that B&N so if I randomly show up there, Ill resist the urge to hug you.

You touch my heart, and I like you more than ever now!

These pics are from the Splash Playground in Germantown. Kind of trek for us but sooo worth it.
We're there a lot, if you care to stalk.

I feel like that in my prenatal yoga class - I want to hug all the first time moms and say - don't worry, that baby will be born one way or another - and then you'll have a whole different set of things to worry about!

We would totally stalk you at the fountains... if we didn't live two time zones away.

That wonderful veteran feeling--remember it. There are so many firsts to come--some big and some small. It always amazed me how at the year-mark, the terrifying thing we could not do, could not dream of doing, could not imagine knowing how to begin...was done. And then I'd find that we had the same wild-eyed fear again, over something else (locker combinations, staying home alone, overnight school trip) and I'd have to remind myself that in a year, it'd probably be ALL GOOD. And mostly, it was!

We're waiting for the evaluation from Early On right now, and I don't know what to wish for...that he doesn't qualify because he's so healthy! and typical! and developmentally on track! or that he does qualify because, my god, we need some help, please.....his temper and inflexibility *aren't* normal. And I choke back tears and try to breathe normally and pray Dear God, please...not my precious baby.

The only way to market using Twitter is to write books on marketing using Twitter, and then to tweet about it. It's a social media circle jerk!

Oh, you--you with your crazy-funny writing and then the windup and the pitch ** smack ** and with the last few sentences I go from laughing to lump in my throat. I'm happy for you, proud of Noah, sad for new mom you met and now crying at work. Man, your writing is insanely good. How can I ever hope to start a blog when there are bloggers as talented as you are?

Even is no one did it much for you, you now have a wonderful opportunity to encourage and guide some moms who are floundering in the same pool you were a few years ago. You'd be great at it, because no one is really drawn to people who have their crap alltogether. It just makes the rest of us feel impossibly inadequate. Your insecurities and the fact that you're not aware of how together you are, are what will make the other moms feel like they can maneuver this, too.

It's kinda neat to realize that you're a veteran at parenting. The new mom you met is lucky to have met you.

Look at Noah playing in the water spray! I love the joy in his face. Also, that picture of Ezra looking all "hey man, you want a piece of this?" is killing me.

I suggest keeping an emergency $5 in your glove compartment for just such an occasion. Great to hear you're the new hotness at camp! And I am so jealous of that fountain! Looks like fun on a hot day...

My daughter will be a high school senior this fall. There's so much I don't know about the fund-raising, the photos, the yearbook, the mortarboard and gown, the after-party, etc. I'm so grateful to the parents that have been there before me. And I'll be happy to pay it back in two years when my son is a senior and I'm the parent with experience.

It is so funny how we are in the same stages of special needs...at the same time.
I feel that we are the old-timers at our school since we know everyone and they know us. Drew's new teacher saw his face this week and made a face like, "Oh yeah, I saw your file and now I remember who you are!" Now, if I can just find out who the blonde is he is infatuated with....

You are awesome! I love that you are helping these newer moms navigate their way through this process! Keep doing what you are doing, it seems to be working.

You are awesome! I love that you are helping these newer moms navigate their way through this process! Keep doing what you are doing, it seems to be working.

aww..I wanna playdate..but that would be weird huh?..anywhoo, I LOVE that "Bitch, you talkin to me?" look that Ezra has in that pic..so cute

Beautiful pictures. I hope the playdate goes well and you can offer the other mom some laughs and comfort.

MWAH, Noah. Good for you! Good for you both. You're a great mom, Amy- you saw what your boy needed and you got in there and got it for him, and now look at him. Look what an easier time he's having at having fun. You rock. (That's a big fat internet kiss, by the way... Which isn't creepy or stalky. SHUT UP IT IS NOT.)