I just dropped Noah off at his first day of summer camp, which is in his old preschool classroom, with his old preschool teacher, along with three or four of his old preschool classmates. None of which helped the case I was trying to build all last week about preschool being over and it not being my fault that I couldn't take him to preschool, I'm not saying this to be mean, Noah, there really just isn't any school but hey, thanks for letting me know that you truly would rather do anything else in the world than hang out with Mommy for a few measly days.

Last summer, Noah immediately became somewhat infamous at this camp for wedging his entire body into a cubby and refusing to come out for much of the first day.

His teacher fretted over the fact that she couldn't remember where Noah's cubby had been during the school year and whether that would bother him. It didn't. Nor did the sight of new teachers and kids and different toys and switched-around furniture. There was a moment of hesitation when his visual schedule was missing, but he quickly decided that a day/month/season/weather chart hanging by the chalkboard was good enough. I'm not sure I've ever seen him so happy.

So now I'm camped out at a Barnes & Noble, frantically trying to cram six hours of work into the...less than three, that I actually have. I'm sitting next to the business section and I can see a good three or four substantially-sized books about marketing on fucking Twitter, are you kidding me, for real. Mamapop has a brand-new awesome design that I can't even see yet because something something name servers DNS propagation something talkyspeak. 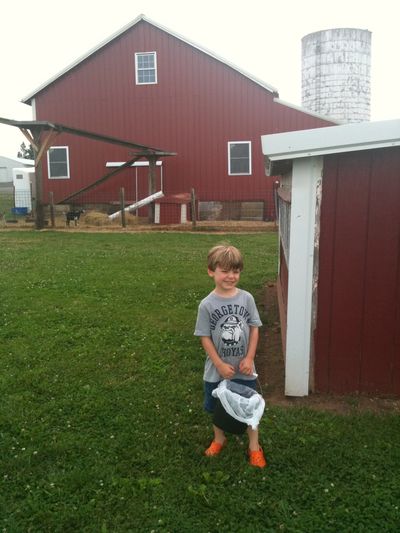 (Also at berry-picking and big-red-barn-seeing-omg-Mom-FINALLY.) 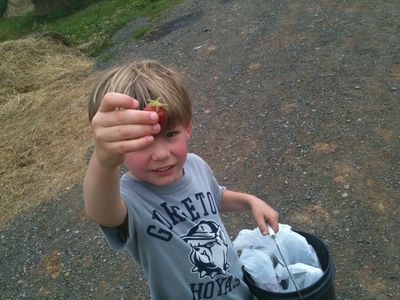 Wow, a real red barn! Awesome. I saw one in GA on our vacation last week and thought of Noah. Glad he is making great progress, that's so cool that all the changes don't even bother him.

I'm going to take a lesson from Noah in confidence and announce my arrival wherever I go with "hey everybody, it's okay, I'm here now!" Because that is awesome.

And also so glad that I'm not the only one who can't reach MamaPop! I thought the internet police at work finally cracked down on where I visit!

That is so awesome that he loves school so much! I would love to have seen him running down the hall so excited to see everyone. Looking forward to hearing all about his day at camp! :)

Today was my daughter's first full day in the Pre-K/ 4 year old room. I walked in with her thinking this would take longer since new room means new fears and new friends and new teachers and instead got a new attitude as she signaled me down for a kiss and told me to go to work saying "I got this."

So happy Noah finally got to see his red barn! And i'm glad he's doing well and off to a good start at summer camp. Also I have to say I enjoyed your posts last week of old pictures of you and your bunny book!

five was also my favorite number.

five is the best.

five was also my favorite number.

five is the best.

Awesome! I sometimes wish I could hide in a cubby...

I know it is weird to love a kid whom I know only from the internet. But love him I do . . .because Noah totally rocks!!

That is totally awesome. What a difference from last year!

Noah's the best! GO NOAH! (And jeezy creezy, it's about damn time you guys found a red barn. Although, living in the midwest in BFE, I think we only have one around here... And we have LOTS of barns.)

Drew had his first day back today too! Unlike Noah, he was not so excited to return. Our developmental school changes teachers, classrooms, everything cause, you know, these kids don't like routine or anything! Sheesh!
Here's to great summer camp experiences! Yeeehaw!

So glad the red barn finally came through for your boy! Good luck getting all your work done in less time, let us know if you figure out the secret of how to do that.

So glad the red barn finally came through for your boy! Good luck getting all your work done in less time, let us know if you figure out the secret of how to do that.

Yay for a red barn!! About damn time. Poor kid.

Glad he started off so well!

I actually *work* in a big red barn house looky like thingy. And drive by several big, red barns on my way to work. Every time I see them now, I think of Noah. Poor Noah, living all the way in DC and never able to see a big, red barn like that's all he ever wanted out of life, and I get to drive past them every day.
Congrats, Noah. Scratch that one off of your list. :-)

I'm just wondering--are you and Noah ever exhausted from all the butt you kicked this year? I can't think of a better friend for all those first time anxious camper moms than you. Huzzah!

Awesome first day! Sounds like it couldn't have been better.

I can only see the RSS feed at Mampop. I'm hoping this isn't the redesign.

I am officially going to start entering every place I go EVER with an enthusiastic "HEY EVERYBODY, IT'S OKAY! I AM HERE NOW!" Sure, I'm not as awesome and adorable as Noah but it won't get old...

Larriland farms? Love that place, especially in October with the Boo Barn and the hay ride. I think I have a picture of my girls in that same spot with the goat in the same spot... weird.

Summer camp is almost as cool as berries and red barns. I dropped my son off for a week of sleep over camp and he shooed me away very quickly!

I have been completely obsessed with the number 5 for as long as I can remember. It is my absolute favorite, but I will share.

this is so great! It is wonderful to see and experience all his wonderful progress. I loved the way he announced his entrance.. :-) very cool.