Home Archives About Subscribe Advice Smackdown Tip Jar
I Have a Bad Ceiling About This...
Magic

It turns out, if I deliberately decide to stay off the Internet* for an entire day, that I am downright PRODUCTIVE. Possibly even bordering on COMPETENT.

The first order of business yesterday was a playdate, and don't you love that while I would never betray the sacred trust of What Happens on a Playdate, Stays on a Playdate and actually TELL you about the playdate, I still feel compelled to tell you that yes, I totally fucking had a playdate, motherfuckers. I have friends and am in demand for social gatherings with other human beings. WHAT UP. PLAYDATE.

(She's probably reading this, by the way, so I will thank all of y'all to make me sound awesome in the comment section and not say anything about that time at the place with the thing. You know what I'm talking about.)

So anyway, I decided to clean the house before the playdate. (Playdate! Playdaaaate!) And I realize this is completely 1) lame, and probably 2) cheating, because there's usually some unspoken arrangement between women that we're only supposed to express shame over the messy state of our homes and one-up each other regarding our failures.

HOSTESS: I am sorry the house is such a mess!

GUEST: Oh no, this is lovely! You should see MY house! It's a disaster!

HOSTESS: Oh, but you should see the upstairs! It's a total pigsty up there.

GUEST: Oh, mine too! I've roped it off with police tape!

HOSTESS: I LOST A CAT IN MY CLOSET SIX MONTHS AGO.

GUEST: I HAVE AN ACTIVELY LEAKING NUCLEAR REACTOR IN MY BASEMENT.

SO ANYWAY. My cleaning of the house mostly involved frantic dishwasher loading and sweeping up a thick carpet of catnip off the kitchen floor, because Max had somehow gotten the bag out of a cabinet during the night and ripped it open. I found him sprawled out and covered in the stuff that morning, high as a freaking kite. Even after I cleaned it all up, he kept returning to the scene to sniff the floorboards and chew on a nearby throw rug.

Oh! And then I cleared off the dining room table, even going so far as to set a lovely silver centerpiece bowl out, only to realize the bowl looked kind of dumb empty. So I thought: Fruit! I shall fill it with fruit. But the only fruit we had was one overly browned banana and some pathetically shriveled-looking limes.

I put the bowl away. I think this might be the first time in the history of the world that I successfully backed down from a Bad Idea, instead of like: I KNOW LET'S TRY SOME SCENTED CANDLES! OR TRAIL MIX! SCENTED CANDLES AND TRAIL MIX! IT'S POTPOURRI!

After the playdate, I was feeling so successfully housewife-y that I went on a cooking and baking rampage, the unplanned-for kind, where you're missing a good 25% of ingredients from every recipe but decide to improvise anyway, resulting in 1) several questionably edible results that you will decide to maybe freeze for the babysitter to microwave later, thus making it officially someone else's problem, and 2) a completely re-trashed kitchen because you've used every goddamn bowl you own and decided to do several recipes that contained eggs AND oatmeal, which is a combination you can use to repave your driveway in a pinch, I think.

(I didn't really have a point to today's entry. By the way. In case you were waiting for one. Sometimes I stumble into a point, like, AHA! I CAN RE-TYPE A SENTENCE AT THE END THAT'S KIND OF LIKE ONE FROM THE BEGINNING AND IT'S LIKE, OOOOOH CIRCULAR DOUBLE MEANING! SO INTENSE.)

In summary: The house was clean but now it isn't again, my freezer is full of homemade stuffed shells and lentil veggie burgers for my children to reject, I dragged them both to the store so I could buy some coconut to make cookies and also bought a bottle of wine. Never made the cookies. No idea how that happened. Catnip fumes, probably. Ordered Indian food because it turned out I really wasn't in the mood for any of the healthy crap I'd made.

Basically, MOST ACCOMPLISHMENT-FILLED DAY EVER! Going to go lie down now and get all caught up on mah gossip stories. Here is my dog and some toddler feet. 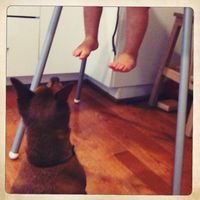 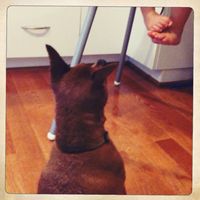 *As opposed to being forcibly (FORCiBLY!) kept off the Internet by Pepco or other technology failures, because then I usually spend 99% of my time checking to see if the Internet is back? Is back now? Internet? I can haz?

I want to hear more about the lentil veggie burgers! DH and I are cutting down on our meat consumption, and these sound awesome.

Not that I want you to turn into a cooking blog, but can you post some of your favorite recipes, or at least favorite cookbooks for kids? The things that you talk about making for them sound awesome!

I had a day without internet, too. Okay that's a lie. But it was a whole lot less than usual. And it actually felt really good. And I almost bet the kids will eat that food of the babysitter offers it instead of you or Jason. Kids are like that.

It's amazing how most of the people who begin the one-upping about messiest house have SO NOT messy houses. REAL messy is when there's bananas and cheerios smashed into the carpet and toys and stickers EVERYWHERE. --That's my house. (The bananas and other food particles do get cleaned up, the kids just never stop eating!)

point the first: I totally win in the messy house contest.
point the two: I hate that cleaning my kitchen just gives me the urge to mess it up again.
point the last: My husband totally makes fun of me for taking picture of toddler/ baby feet.

"AHA! I CAN RE-TYPE A SENTENCE AT THE END THAT'S KIND OF LIKE ONE FROM THE BEGINNING AND IT'S LIKE, OOOOOH CIRCULAR DOUBLE MEANING! SO INTENSE.)"

Well, shit. You just gave away my blogging secret to the entire Internet.

Well dang, I went on a baking spree yesterday too. I just made unhealthy but tasty cookies, though. Mmm, butter and sugar and white flour and chocolate.

I'm heading into a week without internet. The family is calling it "vacation." Last time we took one of these, all the people slept for hours every afternoon except me and my baby, so it wasn't very fun. At least then I had my blogs to read, tho. Maybe if I wave my phone around juuuust riiiight...

you need to install a *like* button on your blog. Cause I have nothing great to add, except

No. I win the messy house contest because my house is BOTH messy AND under construction.

The best part is that I don't even have to be embarrassed. "Come on in. It's a nightmare and it's not my fault."

But I haven't baked in months.

"@amalah Going to Chinatown for dim sum. (Cannot type/say that without asking "Does it have wheat in it?") (Nobody ever gets that. Or me!)"

I GET IT! And my twitter is locked so you probably won't see my reply to you... but here it is, blog-version:

heathabee @amalah SLEEPLESS IN SEATTLE! and you have to sing the dim sum song too from when they were dancing to at the NYE dance!

You are so right about the house un-cleanliness one upping. I am embarrassed to say I've engaged in that many a times (but my house REALLY can be quite a sty....I swear!!!)

Hey, I don't blame you for documenting all of that homemaking skills. If we didn't document, what can we look back to and say "I can SO be a good homemaker person! Look! Look at this day, 2 months ago. SEE?!? Baking AND cleaning AND a cute picture of feet! What more do you want from me?!?!"

Damn! You are like Wonder Woman AND June Cleaver. Jealous.

I took a four-day break from the Internet over Memorial Day weekend and I think I accomplished more around the house in that period than I had in the preceding three or four years combined. A bit sad, really.