Last night we took the kids out for dinner. We'd heard about a nice-sounding restaurant with a "kids eat free" night on Sundays, and we're always, ALWAYS trying to find places that fall within that elusive category of Noah Can Order A Damned Grilled Cheese Sandwich But Mommy And Daddy Can Order Something Besides A Damned Cheeseburger. This place looked like it might fit the bill.

I missed the thing on their website about the magician, though.

We didn't know about the magician until our waiter stopped by to check in on us -- yes, yes, everything is fine! The food is delicious! Love the kids' bento-box style meals! Ezra ate every bite, including the entire section of ketchup, and Noah still cannot BELIEVE he just got a side of Goldfish crackers AT DINNER, like ARE YOU KIDDING ME, OUT-OF-CONTEXT SNACKTIME, THIS PLACE IS AWESOME -- and he told us that a magician would stop by in a few minutes to show the kids some tricks.

Jason and I hugged and reassured, we explained and cajoled, we communicated telepathically across the table like: Get the check now. We know how this is going to end.

And then...poof! Like magic, he appeared! At our table! A magician! OMFG A MAGICIAN.

I wish...I wish you could have seen it, you guys. I wish I'd videotaped THAT, the whole thing, so I could watch it over and over again.

Noah wielded a blue crayon like a magic wand and shrieked with delight when it made a foam ball disappear. The magician handed him another ball that turned into two -- then three! -- when Noah squeezed it tight. Then he handed Noah a marker (uh-oh) and asked him to write his name (UH-OH) on a playing card (MAYDAY MAYDAY)...and Noah did it, along with a request to turn the O into a smiley face. He laughed some more and clapped and was thrilled and amazed with each simple slight-of-hand card trick. He asked for an encore with the magic balls and it was graciously provided.

Ten, maybe fifteen minutes, tops. Didn't matter. That tiny deviation from the expected. A kind stranger connecting with my child, making him laugh, helping him overcome the invisible whatever without even knowing it. It felt like it turned everything around, a big fat UNDO button for all of this summer's low points.

After dinner, Jason nudged me in the direction of the magician: "Birthday. Party. I'm not kidding. Go ask." He'd just finished performing for a mother and her son so I cut in briefly and asked for his card. That's all I meant to say, but then I realized I should probably explain why I was suddenly crying.

"Thank you," I kind of choked out, "My son doesn't usually...things that are supposed to be FUN sometimes...he gets...well, you really made our night."

He handed me his card and assured me that Noah did great. I stammered out something about birthday parties and said I would be in touch and felt kind of dumb.

The mother at the table smiled and nodded at me. "I know," she mouthed. 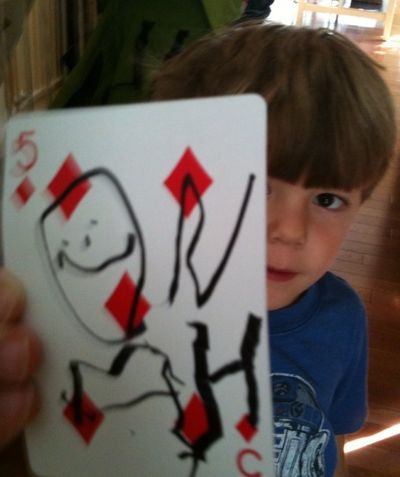 Noah got to keep the card with his name on it. "This is my magic card," he says. "The Magic Man gave it to me."

Happy tears indeed. Everyone at our house just LOVES Noah. We're so glad he had such a happy night.

who says there is no such thing as Magic? I believe...in Noah, he is magical!!

What an awesome story! *tears and sniffles*

My son just asked me why I'm crying. That is The Best Dinner Ever!

Wow. I've been reading for a few years now, and I have to say, I am just rooting for Noah at all times. I love that you share his triumphs-- it gives me hope that if I ever get to have kids that I could work through whatever challenges raising them will present.

My goosebumps are making my skin hurt.

So glad for Noah and y'all. Magic indeed.

Next time my 3 year-old asks me if magic is real, I guess I'm going to have to say, "Yes."

I am fucking bawling and I don't even know you people. Next thing you know Noah is going to become a clown.

The way he wrote his name makes utter and complete sense to me, and I wonder why we all don't write that way, all the time.

Aww, that's so incredibly awesome that he was able to connect with Noah like that! Yay for Jason thinking bday party too!

sooo happy for you!

holy crap. So yesterday when I saw people re-tweeting this, talking about tears and sobbing, I didn't click over because I was in the middle of a busy day and I'm 89283839 years pregnant and hormonal and didn't need to be sobbing into my keyboard just then. Now I read it and... WOW. GO NOAH. How freaking awesome.

Ditto, tears. So happy for you and Noah.

I don't comment much but I read this blog just about every day. So happy for ya'll - for each of you - that your evening was such a success. I started reading for your humor, & have kept reading for that and because I'm rooting for you & Noah. I appreciate you sharing your struggles. My husband & I have some fertility issues, and as each year passes, I get more scared about things like autism. I know Noah's not autistic but what you said about the blogher panel resonated so strongly. And I know that if I'm lucky enough to have a kid like Noah, I will be blessed beyond imagining. Thank you.

And now, along with everyone else, I'm crying. I've been crying most of the morning but I had finally stopped, so thanks. Yay Noah and Yay Magic Man!

You're such a butthole... making me cry like this...

I'm totally sneak-blog-reading while in meetings in another office in another city. The conference room has other people in it. IT'S NO FAIR THAT YOU MADE ME CRY!!!

But I'm still happy to have read this. Sweet, sweet, sweet.

OMG, I'm with the rest of the commenters! I am totally crying. What an awesome treat for you all! Very cool story :)

Remember how you mentioned kicking your readers in the vagina the other day? (emotionally only.)(why did I feel the need to clarify that?)

Yeah. You just did that. My heart was in my throat until it spilled over into happy tears. Yay Noah, yay Jason, yay Magic Man. :)

I agree with the "need warning for possible waterworks" because...sheesh. Half box of kleenex here. And I can't bar my cubicle closed while I get over it.

I am so happy for Noah, and you, I have been reading your blog for over a year now. It has been a really crazy year and I feel some of my own struggles have been mirrored by Noah's struggles. I am delighted to read that as something wonderful happened to him and your whole family, good things are beginning to happen for me as well. Here's to good times ahead Noah! Cheers!

Yes Washington, DC based magician Josh Norris is a fun entertainer and he really knows his stuff.

Norris is a real world worker and you can see it when Josh performs his magical effects he is not just a magician he is an entertainer first a magician second.