The (sick-as-a) Dog Days of Summer

Noah doesn't go back to school until next Tuesday. SeeyooooNextTuesday, is how I feel about that, especially since we received a good dozen letters stating that the first day was August 30, TODAY, before we got a letter saying that haaaaa, suckers, the preschool students start a week later. You were punked! Hope you weren't doing some kind of calendar countdown with your stir-crazy kid or anything.

We attended the school's open house on Friday, even though Noah will be in the same classroom with the same teachers and most of the same kids, but hot damn, that was a good hour of SCHOOL-LIKE ACTIVITIES in a spot that was NOT OUR HOUSE, so we were going and we were going to enjoy every damn minute of it.

And we did! Until we all got sick, thanks to our glorious reintroduction to community toys and community germs. I spent most of the weekend complaining about "allergies" until I woke up this morning like: Oh. Not allergies. Plague and pestilence, more like it.

The previous three paragraphs were brought to you by Advil Cold & Sinus. Not like, sponsored post money brought-to-you-by, but like, my head is stuffed with cotton balls that were possibly soaked in a little booze before someone mashed them into my ears brought-to-you-by. Yes. That kind.

Mmm. Boozy cotton balls. That's actually kind of intriguing. I shall write it down on my list of Terrific Ideas I Came Up With While Drunk Or Medicated. Right under Swiffer duster suits for cats (double-sided) and building a burrito-sized pneumatic tube between my house and Chipotle.

In other news, here are some photos of my son eating his dip-dips, better known to grown-ups who do not talk like high-pitched toddler-like idiots all the time as chips and salsa. 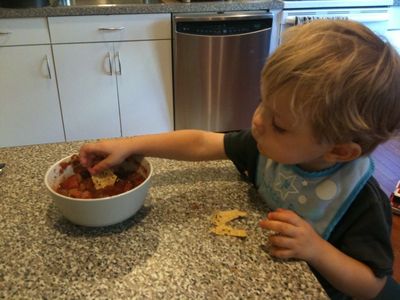 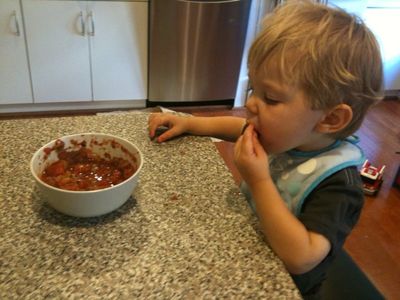 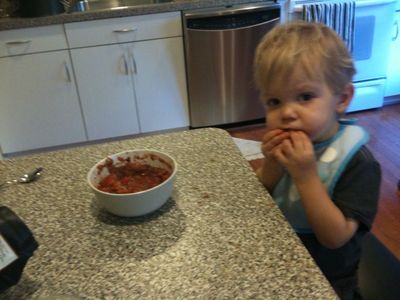 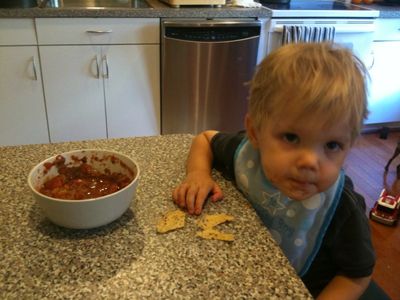 I know. That wasn't really all that exciting. But after you've spent a few years with one child who demands that his food look and/or taste no more daring than Elmer's glue, this new one is still kind of a novelty.

Ha! We have 2 boys, one on the spectrum (older son) and younger boy who's an adventurous eater, too! After all this time making plain pasta, hot dogs and fruit, we're amazed that our littlest will eat anything new and exciting! Dip! Sandwiches with food touching! Ice cream that isn't vanilla! Sorry you're sick. I hope school goes well next week.

Ezra still wears a bib? My Loki is the same age and just rips it off and throws it at me. :/

Kids are weird. My oldest will pretty much eat anything that you put in front of him, but only likes vanilla ice cream. WTF? My youngest appears destined to live on chicken nuggets, ketchup and fruit - and HATES pasta of any kind. What kind of picky eater won't even eat mac-n-cheese or plain, buttered noodles? Mine, apparently.

I hope you all feel better soon!

Until I got a really good look at his face, I thought those pics were of The Noah.

Dang, but you guys' combined DNA sure does produce some cute younguns. ;)

Just diagnosed with strep throat over here. I've been in denial for days, but finally gave in and went to the doctor. Hope we both feel better SOOOOOOON.

That burrito idea? Sounds amazing. Please to be getting on that. Ktnxbai

Trying to reach back into my memories for the song my mom used to play that had dip-dip-dip in it....some fifties tune...anyone have any idea?

My one year old has just discovered the joys of dip dips. Last night's selection included tater tots and ketchup, such a discriminating palate I know. It must be a toddler thing because every one I've ever known have called them dip dips too.

OMG, PLEASE put that Chipotle-tube into production. My mouth is watering just thinking about it. Seriously, that idea is so brilliant that you are highly likely to be a Nobel Laureate should you act on it.

My 20 month old eats like Ezra. He ate Spicy Kale chips on vacation that were making my eyes water and it did not faze him at all. Every time he tries a new spicy thing I get nervous and watch him with my eyes wide... And he just eats and goes back for more. It's a novelty for us, too and he's the only one we have :). Enjoy and revel!

My almost 2 year old grandson LOVES to Dip Dip. But he doesn't like the salsa. So he just dips the heck out of the chip and eats the rest of it. Then there are numberous little dip dip ends all over the table. And I let him double and triple dip in my salsa. Yeah, that's right, I'm the grandma.

That Chipotle thing must happen now.

Hope you all feel better.

At least he'll eat the chips! Maureen just licks the dip (ie, the good stuff) off her crackers and chips.

My 21 month old loves to dip too. She even dipped her apples in ketchup on Saturday (repeatedly), which I'm still a little grossed out about.

My little one loves the salsa, hates the chip... so he dips and sucks. And redips. Ew.

Even without the picky eater, the adventurous food consumption is amusing. I have a bajillion pics of mine eating things like kofte, because I am shocked he will.

Oh, ketchup. You are my saviour. Plunk some of that down with my son's meal and he'll eat ANYTHING. We could give him broccoli or fish or freaking whale blubber, just as long as it comes with a hefty side of keh-sa.

Haha, @Jessica V. I have you beat. My picky eater has to go in another room if someone *else* is eating plain noodles near him. Now that's picky. Love the Ez pics, and now I'm hungry. Thanks.

@Suzanne - that is hysterical and totally made me giggle.

It's dippa-dippa for us and yes we refer to it as that even when there are no children in the room. Or the house. And probably when we're out at fancy restaurants. This is either because we're really secure or really pathetic, you pick.

My youngest won't touch meat unless it is pulverized, breaded and deep fried, or in the form of a hot dog (and then only if the stars are in the proper alignment). But he will eat my chips and salsa, my homemade hot salsa that makes my other kids go "Ew. No way."

I hope you all feel better soon! I can't believe the school sucker punched you all like that. Retribution is needed, I think. Oh and your boy? Adorable. HM

Oh, I am feeling your sick so very much! It started to hit yesterday - I knew it was coming since I had no desire to drink along with the Mad Men cast. Today, hit by a train. And this is all thanks to a lovely new school shoes for my preschooler. It's just the beginning, isn't it?

I am 36, my husband is 41. We call salsa/queso dip/etc "scoopdis." We have no children. Should we seek help immediately?

This is way off topic but I have to thank you.
Tonight I was attacked by prehistoric bugs. My son (5) and I caught one. A sudden flash of your blog hit me, da da dun, stink freakin' bug. I started yelling "don't squish them, Amalah said not to squish them!!"
Very seriously, my kid says "I didn't know you had a bug professional friend?! I hope these bugs didn't build a nest, how many babies do you think they have, do they smell like that cuz they taste bad, will they crawl on me while I'm asleep?" and on and on.

Thank you for being a "bug professional"

Besides absolutely delicious looking, what kind of salsa is that? The chips I know- and love.

(At sushi with my boys...)
5 year old: Can I have the seaweed out of your miso soup mom?

16 month old: gesticulating violently for more of ANYTHING!

Me: Wait... you will eat seaweed but you won't eat lettuce?

I love when you use the word "pestilence" in everyday talky-speak.

@daysgoby - Who put the Bop in the Bop Shoo Bop has a lyric, Who put the dip in the dip-de-dip-de-dip. May be what you're thinking of. http://www.metrolyrics.com/who-put-the-bop-in-the-bop-shoo-bop-lyrics-the-platters.html

In the past two weeks, my 17 mo old has had an ear infection, I've had strep, and last week we all had "allergies" that are now head colds from hell. Are we having fun yet??

I get you on the dip dips. Older son is all about 'white' foods, carb loading, this food must never, ever touch any other food or else I will go on strike at dinner time.

His younger brother enjoyed Indian food for the first time tonight. Vindaloo, Korma and Tikka Masala. He's 11 and he out consumed me. It still doesn't get old to see how much he's willing to try.

Hang in there, Noah, not much longer til school begins.

I also think we could make swiffer suits for babies AND men's underwear out of dryer sheets!

I've been reading your blog for around a year and a half and just started reading back through the archives-- I'm about to the point when Noah was the age Ezra is now. Kinda cool to see the pictures next to each other; they look alike but are each definitely each their own kid. Both are brain-meltingly cute, of course.

Salsa was one of my first foods as a baby! Now, my 10-year-old stepson is a serious spiceophobe, but likes pretty much everything else. Except celery. Kids are weird creatures.