You know? All things considered and ruthlessly mentally compartmentalized, we had a really lovely week around here.

Jason made me an amazing dinner for Valentine's Day. I opted for Just Buy Something Shiny route and picked out a Le Crueset tagine for him, thus ensuring that he would ALSO make me dinner for the rest of the week in his excitement to try it out. Our house smells like a Moroccan restaurant all the time now, and Noah thinks couscous is the best thing ever. Noah is not wrong.

On Wednesday, I had my 24-week OB visit, where I finally got to celebrate the packing on of FOUR WHOLE POUNDS. I know I sound like such a dick every time I bring this topic up, but holy hell, this pregnancy is so weird. 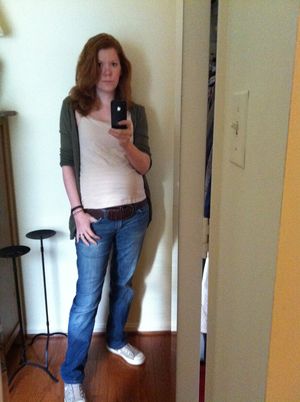 Me at 24 1/2 weeks (and looking so very terribly excited about it!). No, those are not maternity jeans. Yes, that is a belt. Because somebody ate my hips off. 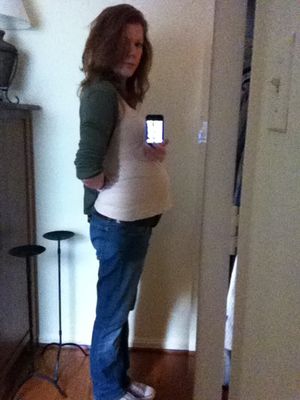 I at least look pregnant from the side, right? The kid is big and strong enough to visibly jiggle a bowl of pudding balanced on my belly with the force of his kicks (what? it was a test for SCIENCE), so he finds other ways to make his presence known. Besides, obviously, being a voracious calorie-parasite sucking up everything I eat. And then apparently working it all off with a nightly gymnastics routine right when I'm trying to sleep.

I go back in two weeks for the glucose test and another ultrasound. (At the last one, the baby was breech, though I think he still is.) And then I keep going every two weeks after that, because we're officially At That Point Already Oh My God We Are Not Ready At All. We've nicknamed the baby IKEA, in part because we've put off several much-needed shopping trips to there for so long now that it's entirely likely that he'll just be born at the store, among the meatballs and closet organizers.

Yesterday, we emerged from our weather-and-illness-fueled hermitude and played outside in the neighborhood for the first time in months. And so many of our neighbors were shocked to see me out of a bulky winter coat and timidly hinted around that oh, hey! It's been awhile, WHAT'S NEW WITH YOU GUYS? And then they eyed my stomach with a mix of panic and confusion, locked in an internal struggle over whether to say something and risk the chance that I just got kind of fat in that one localized area. And also got a boob job. Because yeah. I've totally gained four pounds. IN MY BRA.

We rode bikes and scooters and other various things with wheels (of which I realized we own a frightening, military-sized fleet of, at this point), and Noah invented a game called Harry Potter Escapes From Voldemort, which mostly involved running along the path behind our house until you get to the woods, then turning around and running right back, screaming on the top of your lungs.

Ezra liked it because even he could understand the rules. Also because it involved screaming. 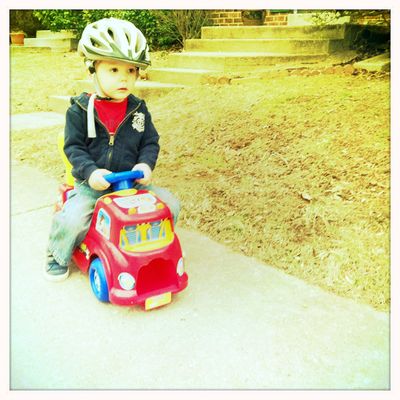 Ezra insists on wearing the bike helmet whenever we go outside, by the way. Even if we're just sitting on the front steps blowing bubbles. Considering he actively works to thwart my every effort to keep him safe 99.9% of the goddamn time, I'm guessing it's more of a fashion statement than anything else. 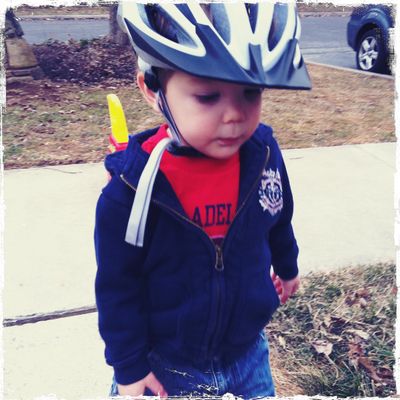 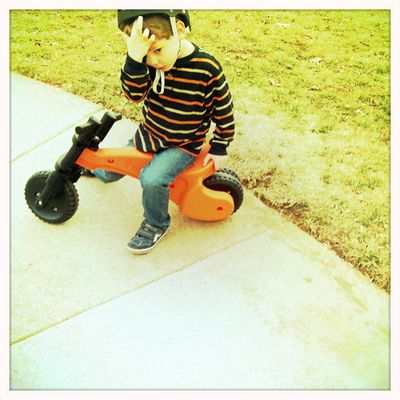 Noah, on the other hand, outgrew his bike helmet over the winter. 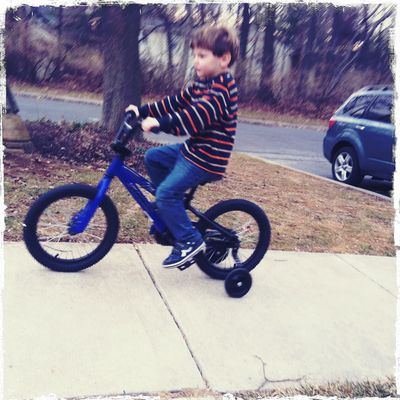 Along with his fear of the big-kid bike. 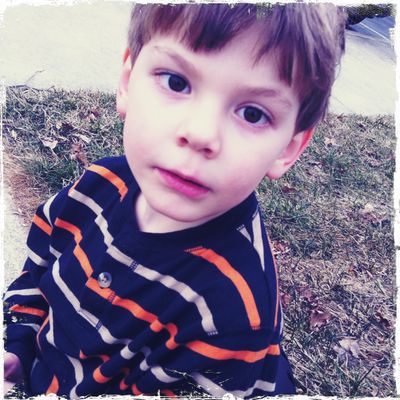 And any trace remainders of toddlerhood. 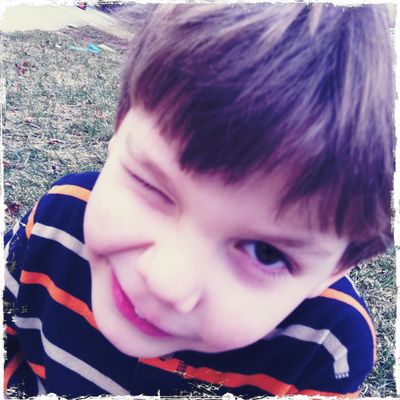 In exchange for full-on little boyhood.

You make me want to have babies. The hell, Amy!?

Wow is Noah all grown up now. And my daughter went through this phase when she wore her bike helmet everywhere. In the middle of the summer. I've never seen such a gross sweaty head before.

You look amazing by the way! No need to apologize as I'm such it's incredibly baffling but hey, take it! Less to get rid of later amirite?

Have a great weekend!

Lookin good, preggers lady! :) Congrats on your 4lbs! Also, the boys? So, so cute.

You look amazing, and I cannot believe how big Noah is all of a sudden! Congrats on your 4 pounds. :)
Say, are you using instagram? Care to have a follower? I'm @nikkidoo if you're new on there and need instagram friends. :)

You look amazing, and I cannot believe how big Noah is all of a sudden! Congrats on your 4 pounds. :)
Say, are you using instagram? Care to have a follower? I'm @nikkidoo if you're new on there and need instagram friends. :)

A: Holy Noah Looking like Jason!
B: Holy Ezra Looking like Noah! (in the second shot where he's looking down only. Most of the time he's Mini-Amy.)
C: Voldemort!!! AAAAAHHHH!!!!!!

OMG, your boys are getting so big...and you look fabulous.

I have to ask the most important question, one that I can't believe no one has asked yet:

What color tagine did you get Jason?!

As always, beautiful children. :) And I love your sneakers. :)

yay babies and outside and such! but your non-maternity jeans are awesome...

I can't believe you are wearing normal jeans at 24.5 weeks...I wish I had that problem. I was in maternity jeans with my third pregnancy by 9 WEEKS.

Your ass has completely disappeared! Not that you had a big one to begin with, but still. I have extra, if you want it!

Such cute boys, you and Jason make.

Your ass has completely disappeared! Not that you had a big one to begin with, but still. I have extra, if you want it!

Such cute boys, you and Jason make.

You really have some adorable boys there...but that second photo of Ezra is just priceless. I adore it.

We gained the same! Oh. Wait. I thought you said 40. Never mind.

My oldest son is 2 months older than Noah and I so know what you mean about the full on boyhood. I look at him now all legs and arms and little belly and can't believe that this little boy was once my first baby. Then I generally burst into tears. It doesnt help that our third, and last baby, who is an exact replica of his older brother is turning one in a couple weeks. All I can say is hold onto every last second of that wonderful sweet smelling newborn phase. Really for the first month of this baby's life I just sat and took hits off of his head trying to get as much of that newborn smell in as possible before it was gone. Somehow with the third baby the first year has just flown by. We're so much busier now that when it was just my first baby, driving the oldest to pre-K, then driving my daughter across town to preschool. And then repeating it all with pickups three hours later. Poor kid gets 90% of his naps on the car. I do miss the days of just one baby when we could both stay in our jammies all day and really had no reason to even leave the bedroom if we didn't want to. But the good thing is I think most third babies are easy going just because they have no other choice. And even though I was exhausted I didn't mind having to get up 10 times a night to nurse because that was our only quiet time with just the two of us. Having a third was a whole different newborn experience for me and I'm interested to see if it's just me or you will feel the same when little IKEA arrives.

I wore my non-maternity jeans my entire second pregnancy. And I DID NOT have trouble gaining weight. I think they were just low enough. And I had the bella band.

And your children are so cute and so like my boys.

Just wait until he loses his baby teeth and gets the first adult teeth. Then you'll be all, WHERE DID THIS ADULT HUMAN COME FROM??? It all happens so fast! Sheesh.

Your kids are so cute-Noah is grown-up enough to be handsome! Aw!
That's exciting, Dr. every 2 wks!! I just went to every week; it's our 1st, we are really excited but not about the hospital which we saw for the 1st time today, old and hospital-y smelling.

I'm laughing about your calorie-parasite. Of course I immediately started to think how funny it would be if it wasn't a baby but a really, really huge, freakishly strong tapeworm. Surprise!

I need to add that you look great. Also need to request that you please work it on behalf of me, who tends to look like a house when pregnant.

Yeah...I can empathize with your neighbors. When I was at the dentist both the hygenicist & the receptionist were pretty obviously pregnant but I didn't say a word until they did. I have been burned before with making a comment (when the woman was simply wearing a big top). So now, like Dave Barry, I will not mention it again unless I see an actual baby shooting out of her nether regions.

Poor girl. To who ever ate your hips off, please send them my way! You look absolutley beautifil. Just wanted to let ya know I flippppn LOVE your blog. You have fabulous writing skills. I just (finally) finished my own blog, happyjax. I'd love for you to come stop by. Guess what awesome momma is listed as one of my favorites...?

Poor girl. To who ever ate your hips off, please send them my way! You look absolutley beautifil. Just wanted to let ya know I flippppn LOVE your blog. You have fabulous writing skills. I just (finally) finished my own blog, happyjax. I'd love for you to come stop by. Guess what awesome momma is listed as one of my favorites...?

Wow - I've been a regular reader/lurker since before you had Noah and I am so stunned at how much he's grown up!!! You aren't kidding about the toddler to boyhoodness. So awesome and bittersweet all at the same time.