Okay, okay, one last thing about the stupid belt test before I promise to shut up about it:

Instructor: Okay guys, this is your first belt test, so it's okay if you're feeling a little nervous about it. Does anyone here feel a little scared?

Amy: (to self) ME! MEEEE! MEEEEEEEOMG.

Noah: (out loud, to entire room of students and parents) I'm not scared! I'm Harry Potter, and I'm brave! 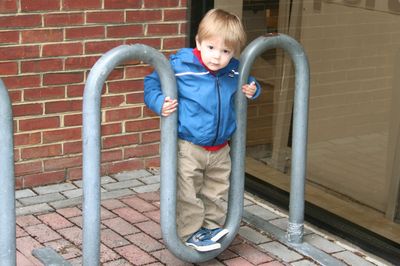 HEY LOOK WHAT I CAN DO THIS IS PRETTY COOL TOO RIGHT WHATEVER KARATE. 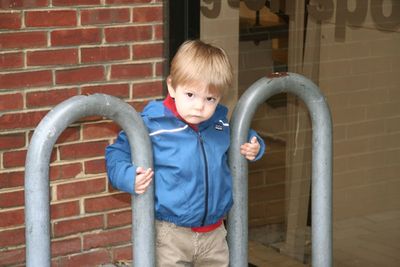 Noah very generously gave Ezra his white belt to wear around the house, and even pieced his broken board back together so his brother could pretend to kick and punch it in half to his little jealous heart's content.

(Ezra would probably like me to document that 1) he already has near-perfect form on his front kick and is working very hard on the round house, 2) he only ever, ever kicks cookbooks. Which totally deserve it, frankly.)

My doctor's office called yesterday and left a message asking me to call them back, and I was seized with terror that oh shit, I probably failed my glucose test. Time for moar sugar drank partay!

But no, that was all fine. Another damn UTI. And another vote of confidence in the medical establishment, since I had to call the office back two times to inform them that the doctor had prescribed an antibiotic that I am deathly allergic to. Nope, can't take that one. Try again please. Nope, not that one either.

(Jeez, if only there was some kind of ACCESSIBLE RECORD OF MY ALLERGIES AND/OR OTHER PERTINENT HEALTH INFORMATION WRITTEN DOWN SOMEWHERE. Like on a health history form! On a chart! In a folder! Or hell, how about a fucking Post-It, maybe.)

(Prescription number three seems to be okay, since I've taken two pills and not yet died of hives. But you know I goddamn Googled that shit before I took any of it. What the HELL.)

I am 28 weeks along now. Third trimester. Things are getting real and slightly more uncomfortable and full of involuntary grunts and sighs and oh my God I can't get my shoes on oooffffs.

I have sorted through and organized three drawers, one closet and eaten an entire basketball: 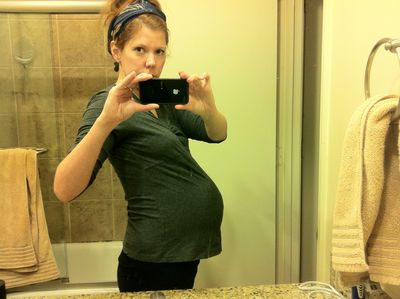 (Don't laugh at my headscarf. That's my Organizin' Scarf, and it gets shit done, people.)

Oh my God I have been looking for that basketball EVERYWHERE. It's clearly under your shirt.

Is it OK to hate what a cute pregnant person you are? Yes? Good.

Nice use of "involuntary" there.

It's unreal, how adorable you are.

On occasion, I used to wear a tiara to clean and organize. That gets things done too.

Srsly, didn't you just announce you were pregnant yesterday? This is going way fast.

You are SOCUTEOMFG!!!
Damn you for somehow making me miss being pregnant! Also I totally need to get me an Organizin Scarf.

I had a UTI during pregnancy and notevenkidding, it was wayyyyyyy more painful than my epidural-free labor and delivery. I hope it goes away fast for you!

Tyra would be proud of your fierce model-eyes in that picture! You look mahvehlous!! I am soooo happy for Noah on his Gold belt!!!

First of all, I hate you in the best possible way. You look AWESOME! And I am diggin the Organizin Scarf. Think you may have started a trend.

It's just wrong that you look so good while pregnant. I looked like my ass ate a basketball.

Oh, my... you are an unbelievably adorable preggo!

And on a side note, I'm almost as proud of Noah as I would be my own son. I've been questioning his ability to focus and pay attention for the last month or so, but last week, he FINALLY blew ONE bubble in swim lessons. ONE. I was so proud I almost cried.

You might totally be the cutest pregnant person on the planet. You're all teeny tiny and then, bloop! Adorable!

I never looked like that when I was pregnant - I swear my babies both laid sideways... and spent a lot of time on my ass & thighs. I've heard that isn't "medically possible" but what the hell do doctors know anyway.

I swear you have just POPPED out in the past two weeks. Your last pregnancy picture post (try saying THAT five times fast) just looked like ME after I ate a sandwich. This... this looks pregnant.

I asked my nurse practitioner if I could take a certain medicine when I was breastfeeding that had been off-limits when I was pregnant. She disappeared for 15 minutes, and I'm pretty sure she spent that time on Google.

Wow, how you have popped out! Sorry, I'm sure you are tired of hearing that.

Ridiculously cute pictures of Ezra, but your adorable basketball is stealing the show. Stinkin cute.

Your pregnancy is seriously flying by for me. Third trimester already?? But ditto all the comments above about how great you look!

Dude...before you even explained the organizin' scarf, I was all "I am totally copying that, so cute!" and if it helps me to organize? EVEN BETTER.

You are looking good lady, and I agree with the others, while my pregnancy is going SO SLOW (not even 8 weeks, yet, GAH, newb!), yours is going SO FAST!

You are absolutely adorable!

Yes, you have indeed popped in the last 2 weeks. The headscarf is totally bitchin' and shows that you mean business. (I WISH I could putt that off!)

Just wondering, are you going back to blond?

*pull, PULL it off. Head smack.

I went "SQUEEEEEEEEEE" so loudly and for so long when I saw that picture of you with the smuggled basetball belly and the "Organizin' Scarf" that I think I died a little. I had already been rendered helpless by the pics of Ezra that it couldn't be helped. I am so proud of Noah for getting his yellow belt. He is such a friggin' rock star, that kid.

I went "SQUEEEEEEEEEE" so loudly and for so long when I saw that picture of you with the smuggled basetball belly and the "Organizin' Scarf" that I think I died a little. I had already been rendered helpless by the pics of Ezra that it couldn't be helped. I am so proud of Noah for getting his yellow belt. He is such a friggin' rock star, that kid.

Yeah Noah, Ezra is adorable, love the scarf, but have to admit...the first words that popped to mind were...Skinny Bitch! (said with love, of course)

Oh, look at your adorable little self. If I could have EVER looked that cute when I was pregnant... (14 years ago... And... I'm loving the headscarf-- totally helps get things done!!)

You look fab and I love the Organizin' Scarf. Are scarves for The Sorting Out of People Who Are Being Annoying available? I could do with one of those.

If you didn't make such adorable Babalahs, I'd be jealous of your skinny pregnant ass.

Sooooo, I have been reading this blog since the whole bringing noah home from the hospital and having to take the dog to the vet post so I have to throw this out there and I hope you dont think it is creepy and all. I make handmade baby/toddler shoes and would love to send you a complimentary newborn pair since I'm just starting my "boys" line this week. Can you send me an email on where to send them if it's ok with you? You can see the girls set at www.etsy.com/shop/liddyslilbows but my very first boys pair I would like to have go to #3

LOVE the Organizin' Scarf look. It's super cute on you! Wow, baby day is getting really close now...

How about the red sticker that is typically on the front of the chart?

It happens though. I was actually given an EXACT antibiotic (rather than just the class) that I told them I was allergic to in the hospital once.

These days I usually start with the list of the antibiotic I can take.

Ugh, my mom is allergic to a bunch of antibiotics and other meds and OMG so many times they prescribe something she is allergic to! She's also allergic to aspirin and had a doctor prescribe Pepto for some stomach thing. When she called to tell him she was allergic to aspirin - which was in the medicine - he told her that she had to take Pepto or the problem would never go away. She was tempted to go to his office and take it in his waiting room and paint the floor pink; except violent puking isn't fun for an 80 year old. (Or anyone really.)

he rest of you is so tiny that your pregnant belly is all BAM! I AM HERE, PEOPLE.

That photo of you is totally adorable :)

Wow, so in that preggo pic you look like about a size zero with a basketball under your shirt. What are you doing because you look FUCKING AMAZING??? Seriously Amy, why do you look so tiny?

You are so cute, pregnant!

Also, my husband wears a blue bandana when he cleans. He goes gangsta with it.

Did they ACTUALLY kick the board and break it?! Holy cow, your toddler can totally kick my butt. Just to make that clear!

Poor Ezra - shown up by his big brother and now his adorable pregnant mom. ; )
I need an Organizing Scarf. I'm pretty sure my lack of one is inhibiting my productivity.

this is soooo unfair... NO one should look as adorable as you do! :)

It seems that docs/nurses never look at patient charts. I have stories. Lots of them.
You have the most perfect baby belly, by the way.

I never knew you needed an organizing scarf. All this time and now I find out THAT'S what I'm doing wrong!