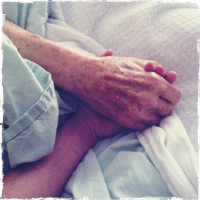 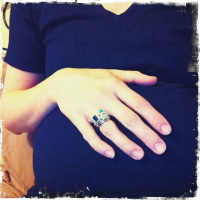 I wish I knew what to say. I don't know if I have anything to say. Let's just...see where this goes. Things are moving quickly, in the downhill direction. He's in a hospital bed in the living room, unable to breathe unless he stays perfectly still and immobile, utterly wiped out from the fight of the past six months. There is talk of moving to morphine soon. Everyone is scrambling to visit, exchanging helpless text messages about how much this sucks and...and...yeah. How are you doing? I don't know. You? Same. Frowny emoticon. Word. I'm going up to see him on Friday, maybe even Thursday night. I don't know whether to go by myself or try to bring the boys one last time -- if this is, indeed, the one last time -- I don't know how to help, what to do, how to feel except bone-blisteringly, overwhelmingly sad. But it's a sad mixed with happy while I fold onesies and count kicks and kiss my children good-night, like an umbrella I keep forgetting to hold onto. Is it okay to change the subject? To talk about OB appointments and weight gain and belly shots? How is one supposed to... Read more →

The first thing I did after getting the new-and-so-fucking-not-improved news on Friday was go on an Emotional Etsy Rampage, spilling out the contents of my PayPal account (and gnawing at the edges of Instant Bank Account Tranfers) in exchange for things for the new baby. Wall decals! A custom mobile! Upcycled vintage galvanized storage containers! Bibs! A necklace that I've had in my favorites list for a year but never bought and today is the day! That necklace is mine! Suck it, sadness! Suck on shiny things and die! I stopped only after Noah brought me the Xbox remote and a long, involved (and HIGHLY EMOTIONAL) story about a giant snake level on the Harry Potter Lego game and he couldn't finish the potion and Hermione is stuck in a corner and keeps getting blowed up by the snake and you need to help me, and I was briefly consumed with resentment that really? Really, Noah? This is the biggest challenge in your little life right now? This is the crisis that's reduced you to tears? A video-game snake? MADE OUT OF VIDEO-GAME LEGOS? Yes, ladies and gentlemen of the jury, I Pain-Olympic'ed my own child. It was a really... Read more →

My mom just called. After multiple blood and platelet transfusions this week, my dad's numbers were the lowest they've ever been. Hemoglobin at 6. Platelets at 10. So no more chemo, for real this time. No more transfusions. No more. He's enrolled in hospice. The prognosis is two months. I'm due in two and a half. Read more →

So I'm pretty sure I mentioned once or twice or fourteen frillion times that we signed up for a family membership at the YMCA, mostly so we would finally get off our butts and get the boys some swimming lessons. HOW'S THAT ALL GOING?, asks absolutely no one in the world. GREAT! LET ME TREAT YOU TO A PAINFULLY DETAILED RUNDOWN, responds boring, self-centered mommyblogger. Noah is doing well. I was nervous that we'd waited too long for swimming lessons, but now I'm glad we waited until he was past his fears of the water and a bit more coordinated with that whole vestibular system thing or whatever, because he LOVES swimming. He's much braver about getting water on his head and face and you know, not clinging to our necks in fight-or-flight terror. He can at least do a pretty decent dog-paddle on his own and do something vaguely approaching proper swimming form with a little assistance. Between swimming and karate, he's packed on a good two pounds of solid muscle in just two months. Ezra is...well, EZRA. In what I'm beginning to sense is going to be the theme of this child's life, he has already -- in... Read more →

Welcome to the Nursery 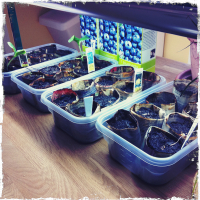 No, not THAT one. That one's still an unspeakable pile of horror and disorganization and missing crib screws. I meant this one: Goddamn hippies. When we first moved from the city to the 'burbs we were pretty much incapable of keeping anything green alive (except for one hand-me-down decade-old jade plant), and in fact saw the tiny yard we have here as a plus: LESS FOLIAGE TO MURDER. We moved in. The jade plant promptly caught some disease and died. But we bought some herbs and stuck 'em in a planter out back. And then a tomato plant. Then peppers and zucchini and cauliflower and strawberries and onions and kale and butternut squash and beets and parsnips and leeks and homemade baby food and now it's a big production involving self-watering containers and concrete wire supports and composting and newspaper seedling pots and big ugly greenhouse light in our kitchen and I'm pouting because I don't have a deep enough pot to grow sweet potatoes in. YET, anyway. We have no immediate plans to move, though every time a single-family house goes up for sale in our neighborhood Jason and I play a game of imaginary landscaping and discuss just... Read more →

Okay, okay, one last thing about the stupid belt test before I promise to shut up about it: Instructor: Okay guys, this is your first belt test, so it's okay if you're feeling a little nervous about it. Does anyone here feel a little scared? Amy: (to self) ME! MEEEE! MEEEEEEEOMG. Noah: (out loud, to entire room of students and parents) I'm not scared! I'm Harry Potter, and I'm brave! HEY LOOK WHAT I CAN DO THIS IS PRETTY COOL TOO RIGHT WHATEVER KARATE. Noah very generously gave Ezra his white belt to wear around the house, and even pieced his broken board back together so his brother could pretend to kick and punch it in half to his little jealous heart's content. (Ezra would probably like me to document that 1) he already has near-perfect form on his front kick and is working very hard on the round house, 2) he only ever, ever kicks cookbooks. Which totally deserve it, frankly.) *** My doctor's office called yesterday and left a message asking me to call them back, and I was seized with terror that oh shit, I probably failed my glucose test. Time for moar sugar drank partay! But... Read more →

(He passed the belt test, is what I'm saying.) (AND THE KVELLING HAS YET TO CEASE.) Read more → 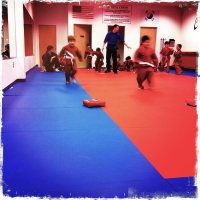 Noah has his first karate belt test tomorrow. A "formality," really, since white and gold belts are still grouped together, skill-wise, in the same class. A "confidence booster," according to the instructor who called me and twisted my arm up out my gut instinct that Noah probably isn't ready and convinced me to turn in the test form (AND OH RIGHT THE $40 FEE) anyway. "Eight to 10 classes" is all it typically takes to move from a white belt to gold. Noah's attended 12. Every other white belt is taking the test, and the next opportunity to move up isn't until three months from now. Okay! Okay. Fine. And then: "Hmm, I dunno" from a different instructor on Monday, when I told him Noah was signed up. The attention issues, the inability to focus or look instructors in the eye, the non-stop wiggling and bouncing, all of it could, in fact, pose a little bit of a problem. He can do all the required moves at home, and one-on-one with an instructor when we've requested a bit of extra help. But the belt test isn't at home, or one-on-one, or even really, about the karate moves themselves. The first... Read more →

(AKA glucose tolerance testing, TAKE TWO) 7:59 am. Stumble downstairs, open fridge, confront today's nemesis: EASYDEX 50 Oral Glucose Tolerance Beverage, Orange Flavor. Ooh, variety! 8:00 am. DRINK. 8:01 am. You know, the orange version isn't half bad. 8:02 am. It tastes exactly like the orange drink McDonald's used to serve at birthday parties. 8:03 am. Does McDonald's still sell that orange drink? 8:04 am. Does McDonald's still do birthday parties? 8:05 am. Because hell, I feel guilty enough copping to the occasional drive-thru order of chicken nuggets and chocolate milk, I can't imagine sending out invites to a McDonald's-themed birthday party, which in this neck of the yuppie/hippie woods might as well read COME PARTY WITH SATAN! CELEBRATE CHILDHOOD OBESITY WITH THE SILENT TEARS OF UNETHICALLY RAISED BEEF. ALSO, THERE'S DIABETES IN THE GOODIE BAGS. 8:06 am. Aw, the drink's all gone. It was kind of yummy. 8:10 am. And I feel still feel fine, actually. 8:11 am. Question: If I'm a yuppie and a hippie, would you call that yippie? Or a huppie? 8:20 am. Still feel fine. 8:21 am. Clearly, I have developed immunity to the glucose drink. 8:22 am. I EVEN FOUND MY SHOES IN THE... Read more →