This is the last post in the More Birthdays campaign, sponsored by the American Cancer Society.

I imagine it's pretty obvious by now that I didn't really have a plan or theme for this "series," but just sat down each time and started typing and hoped that I'd stumble upon a point or insight somewhere along the way.

Honestly, most of the time I just crossed my fingers that I wouldn't get an ominous phone call in between the draft stage and the publish button.

I guess, as usual, the best place to start is with the dry, basic facts:

The doctors told my dad it was time to stop the chemotherapy. He opted...not to take that advice, and got his oncologist to concede that as long as he kept his blood count numbers just above a bargain-basement level, he could probably continue with chemo.

The cancer has spread to his lymph nodes. But not as much as the doctors thought. His spleen is enlarged. But not as enlarged as it could be.

After multiple cancellations, at least one infection, some antibiotics and I don't even know how many transfusions, he's back at chemo today for the first time in a very long month, right now.

I don't like that voice. That voice makes me feel like a bad person, a bad daughter.

I wish I could hear hope.

But I'm glad my father hears it.

I hope everybody hears it too. 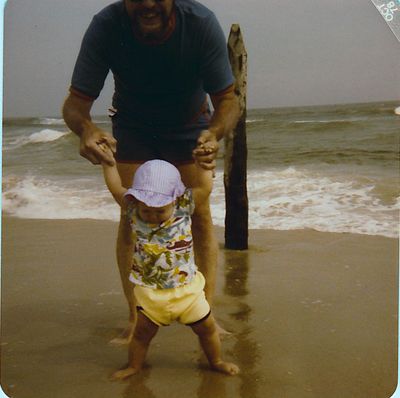 Being realistic is not a bad thing. It can make you feel like a cold-hearted beyotch at times, but really, you're being the voice of sanity here.

Thinking of - and hoping for - you guys.

My grandfather died this morning after a fast-moving and undetected cancer ravaged his entire body. He never even saw a doctor until a week ago. Today, he is gone and we are all reeling.

Sending you hope and love. Fuck cancer, and bless your whole family for hanging in there.

I think it's ok to be a realist; you have to protect yourself and it doesn't make you a bad daughter. Knowing that your dad reads your posts...he knows exactly how much you love him, you know? And based on what you've written, it's a ton.

Good luck to you and your dad and everyone, and my thoughts are with you.

Fuck cancer. I'm sending all sorts of warm and healing vibes your way.

Oh, dear. I was just where you are less than a year ago. My mother was thisclose to dead, and her oncologist was trying to encourage her to have chemo. I mean, she had pancreatic cancer, that had not been discovered until very late, and had an operation that she barely survived..... She thought she should fight, for us, her children; we wanted her to let go, which is a scary thing to say to your mother. Anyway. It was a hard, scary time, and I'm sorry that's where you are now. I wish you hope and peace and peace and hope, and remember all you do is the best you can. It's given me great comfort, more than I would ever have believed, now that both my parents are gone.

I've been reading you since our first babies were born, five years ago. I'm also a writer who left work to stay home with my son(s). But I didn't find another outlet like you did. And I haven't gotten better like you have. Your writing is consistently great now, Amy. I know your Dad was an English teacher. And I can't think of a better way to honor him than with your writing.

These posts always make me cry, trying to imagine what you are going through, as well as what your parents are going through. I always had a hard time understanding why your dad wanted to put himself through so much pain because the pain sounds so horrific. But. Less than a week ago I found out I have a 6cm tumor on my left kidney. They do think it's cancer. I know this is your blog and your family and your dad. But I understand him now.

He is very brave.I hope he gets what he needs out of this.

I lost my dad four years ago to kidney disease and suspected bone cancer.

I think as a game changer for your family Amy... read Carr's Crazy Sexy Cancer.

For all of us, it's time to see the connection between our guts, brains, and health...

You are most decidedly not a bad daughter.

Your father is reacting to this in his own way, and you are in yours. That does not make you a bad daughter.

You have a true gift to to make us understand. Thank you.
And ((hugs)) to you.
And to a man who can hope, there is now a huge number of people sending love and healing his way - ((hugs)) to him too.

I never leave comments because I'm bad like that but I've been reading your blog consistently for the past two years (and everywhere else you write--omg, I LOVE your Top Chef Recaps)...I just wanted to say I am so sorry about your father and that your family is frequently in my thoughts. Hope is a good thing. Your father sounds like an amazing man. All my best to your beautiful family...

I am writing this on a laptop on the couch of my parent's home. My mother is beside me, in her chair. She's celebrating her birthday tomorrow. It will be her last. She is enduring (which is more noble than saying suffering which is what is really going on) the final stages of advanced metastatic breast cancer that was found last September. I am her only child. She accepted hospice two weeks ago after 7 rounds of chemo failed to kick cancer's ass. Instead, cancer is kicking her.

I am with her on this last journey with her. It breaks my heart into a thousand and one pieces..but knowing she's accepted her course, I've accepted it as well. I don't want her to die, but I sure as hell can't watch her suffer any more.

I have been hoping your Dad would accept his mortal limitations and be free from his pain and suffering and you and your family can help him on his final journey.

Peace to you and your family.

Oh Amy, there's nothing wrong with hope or hoping, just as long as you don't equate it with expectation of good result. Maybe dong the chemo is keeping your dad going from one day to the next, who knows how these things work. My dad refused chemo but had some surgery and radiotherapy. He then set himself a series of things to complete including a trip to Australia to see some relatives for the last time and finally being a Granddad for the eighth time with the birth back home in the UK of my sister's fourth child (finally a girl following a succession of little boys we all three had produced. He was over the moon!) He did all of this and then just quietly faded away within a few weeks.

@Kathy W. I feel your pain and hope your Mom has a peaceful end to her suffering. I watched my younger sister (the one mentioned in my comment above) lose her fight with breast cancer on the afternoon of her 43rd birthday. The little girl whose birth my Dad fought to stay alive for was 6 years old.

i almost made it to the end of this post. Almost. I am so sorry.

that was supposed to be without crying.

Cancer fucking sucks and I am so sorry you are going through this. Kudos to your dad for being able to hold onto hope.

Good Lord woman..every time I read a post about your Dad I end up crying. Prayers to you and yours as you continue this fight.

Hope is the thing with feathers
That perches in the soul,
And sings the tune--without the words,
And never stops at all,

And sweetest in the gale is heard;
And sore must be the storm
That could abash the little bird
That kept so many warm.

I've heard it in the chillest land,
And on the strangest sea;
Yet, never, in extremity,
It asked a crumb of me.

You are NOT a bad daughter. You are watching your father suffer needlessly from a "treatment" that even his doctors have told him won't work. That's a terrible position to be in. I'm so sorry for you and your family. {{{{{HUGS}}}}}

You're not a bad daughter...you love your father and don't want to see him suffer like this. It's so much harder to watch loved ones suffer than it is to suffer ourselves. He may be thinking that he will let you all down if he "gives up". Men like to be strong for their families...and he loves you. I hope he doesn't suffer long.

My dad did the same. He fought, he never gave up, he never conceded defeat. At times I wanted him to. At others I hoped the tiniest hope that he would win.

I'm sorry you are experiencing this. Fuck cancer.

I still find solace a bit in this because it never fails to make me think of my father.

And you, my father, there on the sad height,
Curse, bless me now with your fierce tears, I pray.
Do not go gentle into that good night.
Rage, rage against the dying of the light. - Dylan Thomas

Your dad can't control the fact that he has cancer; but he can control how he treats it. It's good to feel like you have some control.

Praying for you all.

The problem with that voice, though, is that when the time finally does come, it takes you completely by surprise.

I was the most hopeful, supportive, and positive person when my Dad was dying of cancer, and when the time did come it was a total sucker punch.

You're not a bad daughter. You are who you are, and your father loves you.

Hope is what keeps us alive. I wish you and your father strength.

Hope such a powerful word. Being a cancer patient and a hospice nurse, I thrive on HOPE. Fathers are the strength in a family, lean on him and use his hope to help you smile. Wishing you and your family as much hope as it takes to make it to the next day, and when there is only reality that it is time, I wish you all the perfect moments to remember as a family all the special times you have shared. HugsandHope

I HOPE you and your family the best in getting through this rough time. My parents have both indicated that if they ever get sick at an old age, they would rather not fight it - they would rather just go than make themselves even sicker with chemo in their remaining time, and that breaks my heart to know that they would give up so easily. I'm cheering for your dad over here, he sounds like an awesome guy!

I love that picture so much.

This is such a difficult situation. I'm very sorry you all are having to go through this.

There is still hope... just hold on.Like your dad he keeps holdin' on...my prayers for your family.