Why is today still spring break? Why wasn't one whole week off from school enough? Why this one extra stupid day -- the same day, of course, that I traditionally spend alone and gleeful as I thoughtfully and judiciously "edit" the contents of my children's Easter baskets because THAT BUNNY HAD NO RIGHT TO BE SO GENEROUS -- of stir-crazy kids running around the house begging for peanut-butter eggs?

And honestly, I'm not so sure Noah is particularly thrilled with being home with me anymore either. He's bored and done and over it too. Especially since I won't let him ride his little brother like a donkey anymore or swaddle the dog like an infant.

I am No Fun, you guys. And he is done with me, professionally.

You know what IS fun, though? The new car. The kids looooovvvvvve the new car. They want to live in the new car. Yesterday, in a fit of We're Completely Out Of Activities related boredom, we simply opened all the doors to the new car and set them loose in it to climb and explore and turn traction control on and off.

Jason and I kicked back on the grass with iPhones and Kindles and supervised (which basically meant we looked up frequently enough to confirm that nobody had magically started the car and put it in gear and taken off for a new life on the road) and congratulated ourselves on being the greatest parents ever.

Except that -- and oh, we walked right into this one just like a Creed song -- when Noah was first informed that our Green Car was no more and we now had a new White Car, he took the news (predictably) very badly. Not a fan of change, that one. And I rushed to soothe his tears with the little detail that HEY GUESS WHAT, THERE'S A TV IN THE NEW CAR. Upon hearing this, Noah froze. His eyes went very, very wide. Then he said, "Let me get my coat."

"The TV in the new car is just for special trips," I tried to explain, "Long trips. Like going to see Grandma. Not short everyday trips."

To which my children were like, "HA HA FUNNY MOM NOW HOW'S ABOUT THAT DESPICABLE ME DVD?"

"Well," I tried next. "Today can be all special trips, since it's the first day in the new car. After today, though..."

"AND WOULD IT KILL YOU TO POP SOME POPCORN?" was pretty much the response I got.

Monsters. I have created them. Or at least equipped them with personal wireless headphones.

It's something like 900 degrees outside right now (give or take a few degrees to account for the whole eight-months-pregnant thing), but since our one big planned organized outdoor activity was scheduled for Friday, that means it was 41 degrees and pouring down rain the whole time. 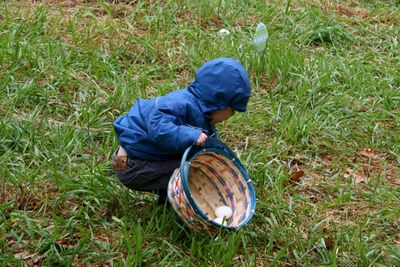 The eggs were real and wet and covered in grass and filth, as if you plucked them straight from the underside of a chicken, for that extra authentic experience... 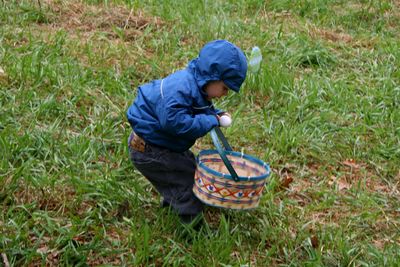 ...which was admittedly dampened a bit by the sight of a parks employee openly marching through the egg hunt area with cartons of hard-boiled eggs, dropping them half-heartedly into the grass with a look of STUPIDEST JOB EVER on his face, while all parents in the vicinity rushed to explain to their preschoolers and toddlers that he was simply the Easter Bunny's HELPER, YEAH, THAT'S TICKET, and he just looks that grumpy because the Bunny doesn't offer very good retirement benefits. 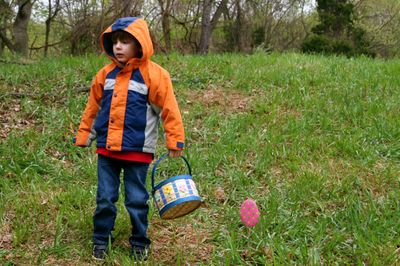 None of our eggs made it to the (indoor) decorating table intact. Ezra kept dropping them and Noah insisted on "opening" his eggs to check for candy inside.

I sense I've let that one down in the whole "know where your food comes from" department, a little bit. 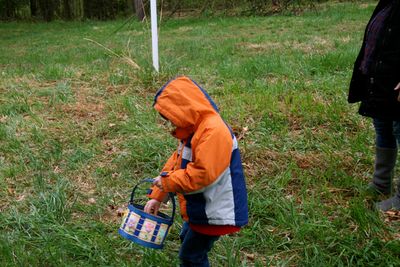 And there's your belly photo for the week, right there. I know you can't see my face or anything, yet I still feel like the massive amounts of fun I was having at the time really radiates through, somehow, anyway, regardless.

I REALLY wish eggs had candy inside. I would eat them much more often!

Heh? Real eggs? All the egg hunts I went to as a child were of the colorful plastic variety.

Your belly is MIA on my phone. Your kids are so funny about the tv in the van. Awesome story there!

My advice to you: Learn how to use the radio thingy a.s.a.p. so the kids can use their wireless headphones and you can still listen to whatever you want up front. This was an epiphany for me! It took me a while to figure out that it was even possible, but now, I can enjoy my NPR while my kids watch their DVD. We, too, started our mini-van journey with the idea that the DVD was only for special occasions, but we have now deemed driving to and from school a special occasion. If Mama doesn't have to listen to squabbling brothers in the backseat, THAT truly is a special occasion.

We had planned to only take one last look at mini-vans and then go back in a day or two. Instead we agreed to buy our Town and Country on the spot. As we drove back, I remarked to A. that we'd had the Corolla for all of E.'s life and he, being an Aspie, might not take to the change well. But since it has remote-opened doors, he immediately took to it as our "space car."

No belly shot photo, but there is an ad of a very fit woman in a bikini on a beach!!

(Guys, the last photo. Way to the left of Noah. The Thing in the black coat and ugly gray boots. That's me and mah belleh.)

boo for cold and rain :-( glad you're loving the sienna. we heart ours too.

At least you didn't try to force your kids to eat the hard-boiled egg yolks! My grandfather was super-strict, which led to my creative solutions to egg yolk disposal program, wherein I taught my younger cousins how best to dispose of egg yolks without anyone catching on.

Yes, I found it. My phone is apparently smarter than me.

WHY do public works employees got to be harshing the Easter Bunny Buzz ? WHYYYYYYYY?

I realize this will not come as news to you but judging by the "belly only" photo, you are well on your way to another 10 pounder :)

You really make me want to get a minivan!! NOW!

Glad you are loving the car.
Can hardly see your belly, you're small as.

We got rained out of the egg hunt we were supposed to go on. Well, really we were just lazy because due to the torrential downpours they moved it inside. And we still didn't go. Because of the laziness.

I was complaining to my husband about the terrible weather we've been having lately. I WANT TO WEAR SHORTS! And then, on Sunday, when I shimmied into my new maternity shorts and saw my legs were fish belly white, I started thinking maybe shorts weather is overrated.

I love our mini-van. The kids love our mini-van. We've even hosted playdates...entirely in the mini-van. Now my daughter's other friends are asking to go on mini-van playdates. It makes me laugh so much. Sure, you can come over for a playdate in our car where you stay completely confined to the back two rows and are completely happy and safe in that small enclosed area. Enjoy! Yes, any unopened packs of fruit snacks are fair game. Books and toys that have been neglected back there? Hooray! Bonus fun.

Yeah, our definition of the "long trips" required for DVD usage got very relaxed. I still draw the line at trips to school or Target, but the 45 minute ride to Gramma's house has become fair game.

My biggest problem now is three kids but only two sets of headphones, which means I have to listen to the SpongeBob DVD instead of my iPod when I drive them.

I have a Sienna too and I LOVE it! We also started out with DVD just for long trips, now it's almost all the time. It's one of my few quiet moments in my day to just listen to the radio. So, I justify the excess tv with mommy sanity being a priority. Eh.

I have guilt about using the TV in the suburban because I have an idealistic vision of heartfelt conversations and solving the worlds problems. But I think back to my mother and her saying "Don't make me stop this car" and realize that there is no guilt in a peaceful trip to the store.
Thanks.