From the Boy Who Brought You "Fuckles"

(Actual word-for-word transcript from actual video taken on Monday, which is sadly not exactly suitable for public consumption because one of the on-camera participants was only clad in his underwear, and the other one decided to take off his pants at some point during the conversation as well, and I don't really remember why that was exactly, but they were also standing on top of a wobbly rattan ottoman they'd placed on top of an unsteady upholstered storage bench so they could yell HI! HI! HI! out an open window to random strangers on the street, and then Ezra attempted to climb out the window entirely so really the near-nudity thing was the least of the problems we had going on that day.)

Noah: The people in Japan need our help!

Amy: Really? Why do they need our help?

Noah: Because the earthquake and the wave. And all the guys had to run away! Like this!

Noah: *mimes running motions with fingers across his torso*

Noah: Yeah, the guys! Had to run away from the earthquake and the wave, and then everything got broken.

Amy: So how can we help Japan? What should we do?

Noah: We should FIX IT.

Amy: How can we do that?

Noah: Yes, they know everything about building. AND fixing. So we send the builder-fixers to Japan, and they will help, and things won't be broken anymore.

(At this point video derails into some random sibling-on-sibling body slamming and ottoman-rocking and the aforementioned escape attempt by Ezra who managed to get one foot up and onto the lowered window pane and both curtain panels in his fists and then the filmmaker suddenly wakes the fuck up and sees how this is all going to end [HINT: HORRIBLY] and finally puts the camera down to go rescue her children from their own damn selves.) 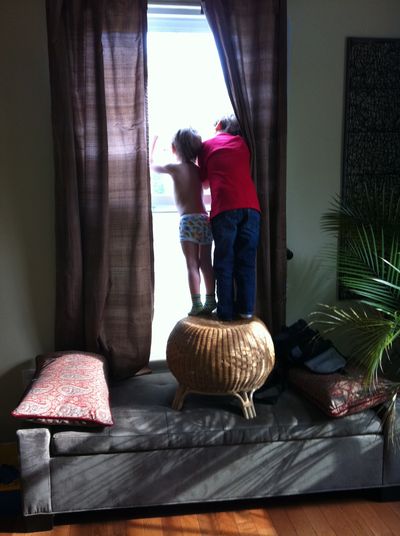 Love those boys!
Duh, Mom. A builder-fixer. Why didn't we think of that? :)

That's not...Noah, standing there in the red? Of course not. That child looks grown. Your children are BABIES. It can't be.

Those builder fixers ARE good at building! And fixing!

Hope your little philanthropist and your littler escape artist are doing well, and that you are too.

I'm just glad to see my kids aren't the only ones who stack impossible things on top of each other to get higher higher higher.

They're giants! Sorry for remarking on their size every other day but seriously, it freaks me out. I must come see them before they tower over me.

I could sooooo see this same scenario happening in my house.

amazing. I think he's onto something with those builder-fixers! I need some at my house.

p.s. my 21 month old calls them "Fuckas" I think kids just like to sneak in cuss words wherever they can!

I'm quite impressed with their ingenuity and eye for safe climbing apparatuses (apparati?) Perhaps the builder-fixers should get on that one right away.

But seriously, so sweet. Who knew kids could connect so empathetically with the goings-on of half a world away. They are amazing, these children of ours.

When I first saw the picture I thought, "there is Noah in his underwear, but who is that big kid?" Then I realized! OMG that big kid IS NOAH!

Builder fixers?!? Well, if they're going to Japan, think they can make a pit stop to NC? There are so many tree limbs on the street (still after the storm) that driving is frustrating!

But, seriously. Your children are awesome! Noah is such a cute little pacifist, and Ezra is just EXTREME! I'm still waiting on some nephews, but until they arrive (whenever that is) I'll just imagine that they'll be as cool as your kids.

Oh, Amy. I know you're freaking waaayyy out about a 3rd, but you're gonna be SO fine. You'll have some crappy days and some REALLY crappy days. But you have a great sense of humor and a wonderful view of life and overall, you will have joy and laughs and loads of love.

Way to keep them thinking globally.
Now where is that ottoman from? I love it!

Awesome! And look at Ez in those undies!!! Also, I'm glad to know that it's not just my kid that randomly takes off his pants...

Builder-fixers - call the President, because he'll want to get right on that!

If I had a nickel for every video that was unfit for internet consumption on account of pants removal... I'd be able to sponsor at least one builder-fixer on a trip to Japan.

Ezra is so long and skinny - when did they both get so grown up? And seriously, you are going to be fine with a third. Most of the time, anyway.

What a sweet, funny boy!

I'm just amazed that Ezra is wearing underwear. My son will be 3 in June and won't even go near a pull-up. "No, mommy, I wear a diaper." Ugh.

That's very sweet! That Noah's a great kid. That will be the nice thing about having a third son, they can't all fit at the window so all the crowding will pretty much guarantee safer times for all.

A child's perspective always seems to make things less fuckled up than they really are. Which is pretty awesome.

I felt like I was looking at a picture of my boys. Love the brothers.

Builder fixers, love that they are even thinking about solutions to this. Sweet and such a good testament to big hearts.

So glad you didn't leave them with the mangoes.

Uh, Noah's like 4 1/2 feet tall. WTF??? He's also a sweetheart.
I see Ezra has reached the tall big-boy phase of toddlerhood. They are sure growing fast!

so precious. I know i say that alot but just ugh. overload.

There's lots of room on that ottoman for one more!
And Noah may just save a country one day....believe....

When did Ez become a not baby?

From a reader who lives in Japan (and got a good shaking in the earthquake, but thankfully lives far enough away that there was no serious damage), tell Noah thanks. And to keep the builder-fixers coming....

I'm a huge huge fan of yours living in Tokyo, Japan. Thanks for thinking of us. We're waiting for your builder fixers, Noah. And a huge hug would be nice, too.

I wish there were builder-fixers for all that ails the world. Your boy is so sweet!

They need the Doozers from Fraggle Rock, a TV programme which my younger son loved unreservedly as a small child. Amongst many other things he was going to be a Doozer when he grew up.

My sons are: nearly 6, and 2 next week. Oy. I feel like reading your blog is like looking into the future. And sometimes it is scary. Very scary.

But a third will be great! Right?!

Oh that the world could be fixed in such a way. Way to wake up, filmmaker. I would have remained behind the camera, unaware.

I was totally enraptured with my 11 month olds new found cruising skills.. and taped her pulling table over on her head.. mothering fail!

PS - that is a fabulous storage bench, could you tell me where from??

The Pioneer Woman is posting pics this weeks of brothers. You should totally submit!

Your boys are so adorbs. I just want to squeeze them.

The freckles/fuckles thing is so funny! A friend of mine who speaks Russian had told me recently that Russian word for "torch" was "fuckles".

Also, the word for "department" in Russian is "fuck". I tend to store info like that. Now I'm passing it on to you. LOL

You are so stinking funny, Amy--consistently and brilliantly so! Thank you for every word in this post!

That reminds me SO MUCH of my daughter's current obsession with "making". She loves to help me cook and bake, and we barely finish with one meal or batch of cookies before she demands to make something else. Recently, she has decided that we ought to be able to make other things too.
Gwen: Can we watch Go Gabba Gabba [sic] when we get home?
Mama: Well, we don't have any Yo Gabba Gabba shows. We could watch Blue's Clues or Backyardigans.
Gwen: Or ... we could MAKE a Go Gabba Gabba show! With stickers! And put them everywhere! At the big table!
Mama: Well, we certainly would need the big table for a project like that.

she has decided that we ought to be able to make other things too.

Way to wake up, filmmaker. I would have remained behind the camera

Your boy is so sweet!