Yellow & Black & Read All Over

Hidden among my father's rows and rows of books -- every book that had ever landed on the high school English curriculum list, plus a few from the banned column, for good measure -- was an impressive stash of Cliffs Notes.

I remember being surprised by the huge number of yellow-and-black-striped study guides one day while digging around for something to read, something more challenging than the pathetic selection of Christian young adult fiction-with-a-Jesus-message my school's library offered. I think I was on a Thomas Hardy kick, or maybe it was Vonnegut by that point. Either way, I knew I'd find something that would alternately impress and/or horrify my own English teacher, but I wasn't expecting the Cliffs Notes.

I knew exactly what they were, and how most of my peers used them: For cheating. You read the guide and not the book, and hopefully gleaned enough information to bullshit your way through class discussions and tests. They were a safer bet than renting a movie version that might have changed everything, but of course they cost a lot more, and you ran the risk of having a teacher or parent catch you with them.

And then there was my parent, who was also a teacher, who owned dozens of them. More than dozens! Right there in our house, steps away from my bedroom! Dickens, Shakespeare, Hawthorne. Books I'd enjoyed and books I'd barely been able to endure.

So I asked him about the Cliffs Notes. Why did he have them? Weren't they like, totally solely for cheating? Weren't they a sin of some kind?

Well, yes and no, he told me. He bought them to help him write tests that would weed out the cheaters. The kids who relied solely on the notes and regurgitated the sample essays and themes. Cliffs Notes left stuff out a lot, you see, so he could include questions about the left-out stuff on exams, thus quickly teaching his students a lesson: Mr. Corbett Will Not Let You Get Away With That Crap.

But sometimes the guides were helpful, if you've read the book but need a little help understanding what you've read, or keeping characters or historical events straight, or just want to maybe read a different interpretation than what your teacher tells you.

Here he gave me A Look, since we had a bit of a private joke about my English teacher's absolute butchering of Great Expectations the year before, because every single work of literature contained Christ-figure symbolism according to him, and I'd gotten so fed up with it I'd written an entire paper arguing that Miss Havisham represented a "fallen Christ figure" just to be a pain in his ass, and he gave me an A on the goddamned nonsensical thing.

After that, I frequently helped myself to the Cliffs Notes. Never in place of the reading the assigned text, because, well, my dad trusted me with his Cliffs Notes. He knew I wasn't a cheater. He knew I didn't need to cheat. I was smart, I was an A student, I'd been holding my own with him in discussions on Shakespeare since junior high.

The funny thing is that I didn't really and truly know he knew all that until he trusted me with his Cliffs Notes. 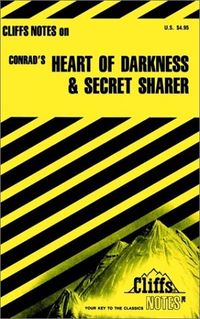 Then Heart of Darkness happened. Heart of Fucking Darkness, by Joseph Fucking Conrad. I hated that book. I simply could not get into that book. I tried, over and over again, but somehow ended up lost and frustrated only a couple chapters in. I had a lot of other projects going on so I procrastinated, figuring that I could speed read it under pressure at the final hour in time for the exam.

I went to my dad's study in a panic. Had he ever read Heart of Darkness? Ever taught it in class? What was I missing? What was wrong with me?

Nothing, he said. I hate that book too. The horror! The horror! Terribly written. It's a chore to get through.

And then: Do we have the Cliffs Notes for that one?

And he never, ever did.

(And I did just fine on the test.)

I hated that book too!

However, that horrible book created one of my best high school memories! One that we all still talk about (we are all still besties).

A friend of mine overheard us talking about the final words "The Horror! The Horror!" and thought we said "The Whore! The Whore!". She answered a pop quiz question with the wrong quote! Priceless.

I love this post. Love the way you and your Dad bonded over your secret use of Cliff Notes (which are fantastic for understanding the most painful of books) and I love that the two of you talked about this stuff. My father and I did the same.

I was so lost in an honors philosophy class in college he bought the text book, read my assignments with me and talked to me about it on the phone the night before my class. It saved me, and was a cherished little secret we shared, a time to talk about something so foreign that he helped me figure out...but we both hated.

Thank you for sharing this great story.

I just read Heart of Darkness for my book club and ugh. I felt just like you and your dad about it.

OMG we are kindred spirits, I HATED Heart of Darkness, and I could not "get into" it either. I wish that I had gotten the Cliffs Notes for it. Great story about your dad.

I had the same problem with Heart of Darkness and am dreading next year when it will be required reading for my daughter. I feel like I should pick it up again, to be a good parent, but... it was the one book I just couldn't get through. You've made me feel better about it though!

What a great story and a great memory of your dad! He sounds like he was a great parent.

Lovely memory. I was an English major in college and my least-favorite class was a Jacobean drama class taught by a queer theorist. Nothing wrong with queer theory but do you have to give me a bad grade every time I offer any kind of analysis/interpretation that doesn't have to do with overt or latent homosexuality?

I love this. Your dad was awesome. Period.

Beautiful post. Made me smile - thanks for sharing that moment. :)

At the end of this post I was nearly jumping on my desk yelling "ME TOO! ME TOO!" Heart of Darkness was the first time I ever admitted defeat and truly hated a book. I still have yet to ever get through that book! And in AP English, I also turned to Cliffs Notes and aced that exam, and the essay. Wow! So glad I'm not the only one!
Such a great story about your dad. Made me smile!

Gah, I remember slogging through that story on a beautiful day in spring, while lying on the quad, hating every second of it but knowing I had to read it before the upcoming final. HATED it. Glad to know I wasn't the only one.

Great memory of your Dad, Amy. Thank you for sharing it with us.

What a beautiful story. I wish I could write like you do, because I would love to write stories like this to pass down. However, not only can I not write very well, but I can't remember specific instances like this very well. My childhood was "great" and that's about as in-depth as I can get.

I loved reading this, thank you for sharing.

Beautifully written. (-From a fledgling English teacher who's in awe of your father.)

(BTW my mother used to be an English professor. English teachers rule.)

Oh my. Heart of Darkness takes me back to a plane ride to Denver, Colorado for Spring Break my senior year of high school. It was pure torture. Pure God awful torture. I don't recall ever being so pained while attempting to read a book.

I am a new reader and I really enjoy your blog. I was one of the "Cliff Notes" folks. For me Cliff Notes helped me wade through something that was hard for me to understand or figure it out. Sort of turned academic reading into layterms :)

I had almost exactly the same experience with that same damn book!! I didn't understand one bit of it and broke into tears to my mom the night before it was due. No Cliffs Notes though - she talked me through it and helped me write the whole paper, and stayed up all night typing it for me - you and I have awesome parents in common.

I love this post! I was envisioning your Dad's study much like my Dad's study - packed floor to ceiling with books and other rummageables to discover. CliffNotes were like secret mini-novels for me. I could revisit some of my favorite books for the CN interpretations.

I tried reading HoD as an adult (light reading - ha!) and slogged through a good part of it before I gave up. Too much dread and confusion. Gah.

I am struggling, struggling with my husband and getting him to understand and relate to our son on his level. These stories you tell are such great examples of what I want.

And they make me miss my Daddy.

Every time there is a pause between posts, instead of thinking "hm, she's preggo = I wouldn't want to be sitting upright either!" I jump directly to BABY? BABY? BAYYYY BEEEEEEEEEEEEEEE!?!!?!

(I'm in Plano tx, I mean. I may be just the tiiiiiiiniest bit hopped ujp on caffeine, but I'm sure it's not affecting my grammar or making sense.... )

What a sweet memory. Heart of Darkness killed me too. I tried to read it three times. It was my one high school reading horror. It's on my list of books I'd like to try again in adulthood...maybe it will be different?

Loved this story. My sister and I were both English majors. Our mother was from Europe and English was her second language, so we never, ever could count on her for help in lit. And I hated that book as well. I had drool stains from where I would fall asleep on it...

When I first decided to become a high school ENGLISH teacher, with a degree in Journalism (which counted because I could write, I guess), I completely and utterly relied on Cliff's notes to help me to understand books I had neither read in high school, or college, or in some cases (such as in the case of Conrad) had never even heard of.

I so want to be like your dad...Great post Amy. I'm so incredibly thrilled that the comments are still open (even though you have a new post up...and you do look fabulous BTW)