I would like to officially and formally take issue with my own damn post title here -- technically, according to the LMP math, today should be my due date. Early ultrasounds bumped me back a week, only for the later scans to once again suggest that I was actually farther along than we thought and jibed with the May 30th hypothesis. But we officially stuck with the original U/S dating and a June 4th due date and I didn't really care all that much at the time but for the record I SUDDENLY CARE AN AWFUL LOT ALL OF A SUDDEN. 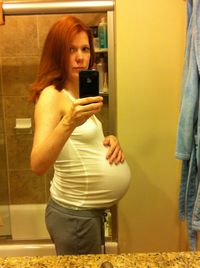 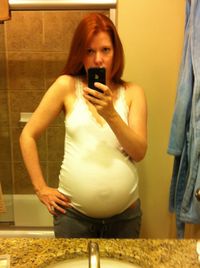 (I do not care, however, about making sure I've remembered to put on a bra before taking photos of myself anymore.)

(Or about looking anything other than really bizarrely kind of mean.)

Anyway, it's a holiday and I'm not going to waste any of y'all's time with stories from my weekend, EVEN THOUGH it included the thrilling additions of my husband becoming temporarily, thoroushly crippled from a cortisone injection in his back on Friday and Ezra puking down my shirt on Saturday and I stress-organized the playroom, like down to making sure that different action figures were sorted into separate bins by movie, trilogy or AT LEAST genre. Needless to say, it was not exactly the likely-last pre-baby weekend I had in mind, what with me babying and waiting on two other human beings instead vice versa and that's about when I took those scowly-type pictures.

But then Tracey and Charlie came over last night and brought baby clothes and dinner and dessert and Kung Fu Panda One for Noah (don't even try to tell him he doesn't need to include the "One" in the title; he has seen the marketing for Kung Fu Panda Two and THERE WILL BE ORDER) and played race cars on the kitchen floor with Ezra and everything actually ended up being pretty damn okay and fun. PLUS I think Charlie's cooking has magical healing powers, because Jason can actually WALK today. Which is nice, for a change.

So, in other words, we're all going to go play outside for awhile. Just the four of us. Before the BOOM EVERYTHING IS DIFFERENT NOW FOREVER thing happens.

Happy Holiday! Hope you and your family enjoy this last weekend before the SHTF. So exciting! Enjoy!

You're scheduled for delivery on the 1st though right? At least it's sort of a compromise. :)

I have 4 more weeks to wait. If he decides to show up on time.

I'm 41 weeks today. CRY ME A RIVER. This sucks. Baby by Wednesday or someone's getting punched in the face.

Ugh. Today is my due date for my first baby, and there is nothing to indicate baby girl is coming soon! I feel like such a blob! Looks like I'll be having a June baby.

I'd just like to point out that your hair (and biceps) are looking fanfreakingtastic.

daughter in law is 39 weeks pregnant and she has set me as her 'tell them to shut up' person on her FB page. 'them' means anyone who says things like "she will come when she is ready" or "What happened to me" I am enjoying myself enormously and love getting the texts that say "ha! You told her! I might laugh this baby out while I am on this BUS trying to shake her out!"

Homemade grape jelly is ALWAYS a great bribe for a dr. My dr was going to make me wait out my 1st child until I gave her 3 jars, she made an excuse for going ahead & delivering my daughter after I had a final ultrasound.

Seventeen years ago, I was pregnant with a baby due on Memorial Day. Her birthday? June 6th. That was the longest week of my life.

Helen...that sounds like a fabulously fun job! I texted my sister the other day at 40 weeks 3 days and asked her if she had the baby yet just in case no one asked her yet that day. Kidding of course...

At 39 weeks pregnant you have more than earned looking a little mean. Hell, at any week pregnant you earn the right! You're growing another human for heaven's sakes!

You look all kinda of gorgeous. And darling! Enjoy the weekend!

You look terrific. Enjoy the last few days of not being out-numbered by the babines.

Did he have a bad reaction to the steroid injections? I've had them probably 6 times or so and EVERY SINGLE TIME I get this intense, terrible, achy pain. Mostly in the back joint they inject, but it usually spreads to my entire low back and pelvis. Apparently it is an uncommon reaction. My husband is actually a MD and he totally thought I was full of shit until one of my back doctors told him that, no, it is a thing. It sucks! If he is having a steroid flare it should pass in a few days. If it isn't that...then I'm sorry!!

"Hey! That lady must be getting a baby!" says my five year old daughter.

I feel ya. I'm 38+3 today with my first. I would like very much for this child to be on the outside of my body, please.

Curse the damn bras, they're a thing of the past for me too. WE ARE ENLIGHTENED WOMEN WITH NIPPLES NO LONGER OPPRESSED BY THE MAN.

My husband had to get those injections. No fun.

You look really, truly, ready to be done and yet also awesome. If today is your technical due date, then maybe you'll see some action before the 4th?

I hate having my due date pushed back. Mine went from June 27th to July 2nd at my first appointment and I still tell people I'm due at the end of June. If this baby doesn't come until July or even *shudder* mid-July I'm going to be very annoyed.

Enjoy yourself, but having the third was best thing ever. You have good days ahead.

Glad the weekend took a turn for the better, there at the end. :) Hope Jason gets to feeling better and that you get ALL the babying you deserve!!

aww...that's sweet. I used a new kind of pasta. instead of semolina flour, the structure of the noodle is comprised of powdered dilauded. take *that* molecular gastronomy!

Is that baby lower? I think that baby is lower today, guys. Any day now, any minute now!

I hope Jason's back comes back on line in time for the trip to the hospital.

You still look incredible. Even when mean.

Didn't you say that June 1st is the day y'all go in after him? Because I'm getting induced tomorrow morning, so it looks like our babies may have adjacent birthdays. Good luck!!

I love how OCD you are right now. Hearing that you organized the action figures like that makes me feel better for going through all of my husband's socks and organizing them by color, height and material (wool gray trouser shouldn't be with cotton gray ankle!)last year when I was DUE May 30 and didn't have the baby until June 2nd.

Not like you really have a choice, but still.

I don't know why exactly but going from two to three felt so much different then from one to two. Maybe because my first two were so close together that my oldest didn't really know what was going on and was way more interested in chicken nuggets than his new baby sister. With our third they were four and nearly three when he was born and were so invested in when their brother would arrive. I know it's hard but I really did try to treasure those last few days as a family of four. The baby is now 15 months and I still have days when they're all trying to sit on top of me and I'm like "Holy crap, I'm 30 and have three freaking kids!" Three kids just feels more like I'm a total actual grownup MOM. And I'll just say, gave a lot of tissues on hand when they come in to meet him for the first time. The absolute love and adoration for their baby brother just radiated off of them and I have never cried so many happy tears. Don't forget to prepare yourself for how weird it is to change that first newborn diaper. Somehow in three years I became inept at changing a tiny diaper. It's much harder than I had remembered. Good luck and enjoy your last days of pregnancy!

Good luck!! Are you still planning on a VBAC if labor kicks in. I just went through one a month ago and I highly recommend it, even if you have to be induced (and I actually had a pretty shitty labor experience.)

Excited to see photos of the new baby. Hang in there!

You look fantastic! Hang in there!

Incidentally, I finally popped for a bottle of Pureology shampoo and conditioner today after spying them in your shower.

I understand that you must be uncomfortable and that is your main concern about the appointment being later than necessary, however I am annoyed because I am anxiously awaiting the revealing of the baby name. Hurry it up doctors!

I want to take issue with your tiny little hips. Until your ass gets pregnant it could be a while! (I hope by the time your read this you're in labor - of course if you are it's unlikely you'll be reading this)

You look so ridiculously awesome! And the hair=Fabulous!

Just wishing you a safe and straightforward delivery if we don't hear from you between now and then.

I feel you. I was due yesterday. No baby. Am now at my desk at work. Ready to punch the next person who says, "you're still here?!?!" No. I am a figment of your imagination.

Did Ez's mystery virus also have a fever? My 3 y.o. has a fever and puked huge amounts (but just once) yesterday. Trying to figure out what is going around (we're in NoVA).

To all the people that say "walking will help start labor", I say, if that were true you'd see a hell of a lot more pregnant women walking around.

I hear there is a cupcake store in Virginia that has a lemon cupcake that women claim brings on labor. Maybe once Jason recovers he can go pick some of those up. Mmm, cupcakes.

Look, Storchlet v 3.0, I have other things to do than checking in here eighty times a day to see if you've decided to make your appearance yet. Get crackin. Your Interwebs Fan Club is dying to see your adorable face. kthxbai.

Re: your tweet about Kung Fu Panda 2 - my daughter (4yo) sobbed, even after the movie was over. So you're not alone!

If Ezra got that stomach flu going around, watch for the horrible stomach cramps/diarrhea that seems to plague the parents within a week. Bright side: it might start labor.

I'm right there with you as am also due 4th June, also expecting another boy (already have a 7 year old)