(This entry is based on actual events.)

(I mean, kind of. I made up some parts up. See if you can guess which ones!)

(Also, certain events have been recreated for photographic purposes.)

(Also also, if you have absolutely no idea what in sam blessed hill is going on here, allow me to direct you to the previous entries in the Deodorant Wars Saga [linked below], which goes further and further off the rails with each ridiculous installment.) 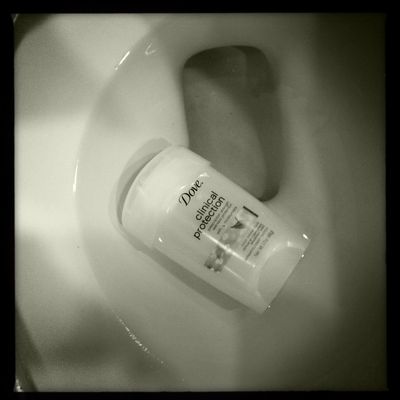 The official cause of death? Accidental toilet drowning.

"Some clumsy dumbass probably just knocked it off the bathroom counter and into the toilet with her elbow," the coroner said. "It's a real shame. By the looks of it she had a good 10, maybe even 20 clicks left in her."

I didn't think too much of it at first. Once you've been Dermatologist Tested and equipped with patented TRIsolidTM body responsive technology, you pretty much become numb to this sort of thing. I just show up to write the reports, file the paperwork.

The sweat stains are gonna win anyway, so why even try? 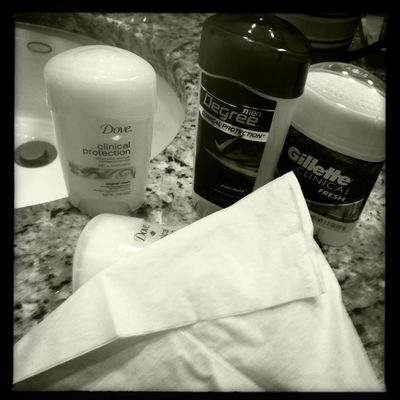 Her younger sister -- a sweet kid, smelled like cucumbers -- came to identify the body. And immediately started asking questions, poking around, sticking her lid where it had no business being.

"This was no accident," she all but hollered. God, I hate when they make a scene. The last thing we need is for the shampoos to get wind of this. Them and the soaps are always getting mysteriously dropped in the shower and have been just itching to a reason to start a full-on riot over sink-side police coverups.

"The angle, the trajectory," she went on, "It's all just too perfect. Who has that kind of aim with their elbow? Honestly. She was clearly pushed. On purpose."

"I loved my sister." Her voice was quieter now, thank goodness. "She was smart. Successful. Clinically proven." 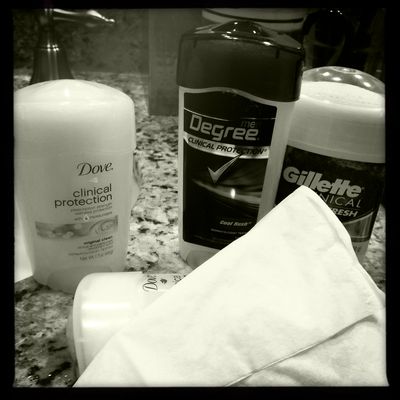 She may have looked like a dame's deodorant, but she had the crime and odor-fighting skills of a man. I had to admire that.

She wasn't all aluminum zirconium tetrachlorohydrex, though. Another look at her sister's lifeless body brought out her softer, moisturizing side.

"She always had prescription-strength wetness protection, but..."

She didn't need to say it. We were both thinking it. Sweat is one thing. Nothing can protect you from a full-on dunk in the shitbowl. 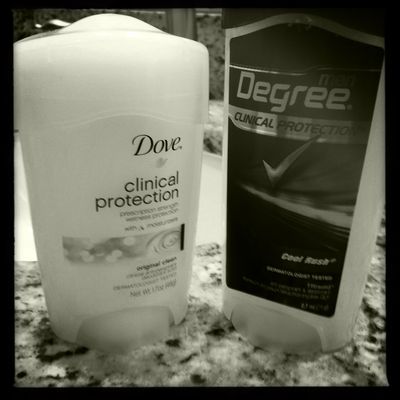 I needed to say something else, though, even if she didn't want to hear it. My own specially-formulated wetness protection didn't extend much further than the medicine cabinet, and if there was foul play going on here, the culprit probably didn't come from there.

No, I suspected this was the work of The Others. They'd once enjoyed a little taste of infamy and the good life -- something with the Internet, I didn't really understand any of it -- but have been banished to a bottom drawer for damn over two years now. They're well past their expiration dates but it turns out once you anthropomorphize a bunch of deodorants for blogging purposes, it gets awful difficult to just toss them in the trash. 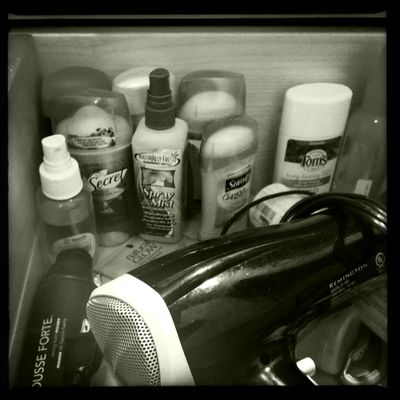 They were a motley bunch, for sure. Shifty. Made the whole drawer smell overpoweringly like lavender-scented cool fresh baby powder mixed with the ambiguously named-by-marketing committee smells of Bella Bloom, Sexy Intrigue and Just Dance.

You never forget that smell.

Yeah, I had my work cut out for me here, if I wanted to help this poor dame find out what happened to her sister. You can probably imagine my surprise when I realized that...I did. Want to help, that is. There was just something about her. Something about this case. It stunk, all right, just like that damned bottom drawer.

"Don't worry, Dovecakes," I told her. "I'll ask around. Just know that getting to the real truth in this town is..." 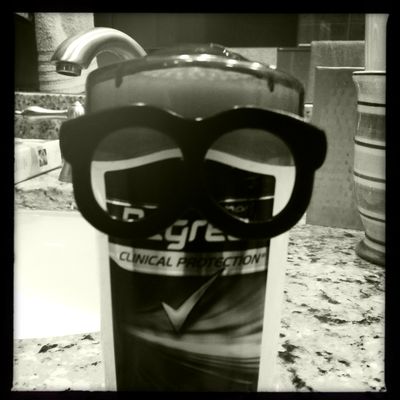 Posted at 10:36 AM in breathtaking dumbness, Deodorant Wars | Permalink | Comments (138)

This has just made my day...I so needed that laugh!

"Sweat is one thing. Nothing can protect you from a full-on dunk in the shitbowl." Ahh, truer words were never spoken.

BTW, I was one of the people who asked for more Deodorant Wars on twitter - so thanks for delivering! Do you think there's love in the air for Lieutenant Degree and Ms. Dove? Or was I reading too much into this post . . .

Move the fuck OVER, Dashiell Hammett!

I know you may think it is too soon to start seeing another deoderant after such a tragedy, but I think if you gave the new Mitchum Advanced Control a chance, you might be as happy as I am after years of dysfunctional relationships with sweat-fighters. Perhaps that will be the beginning of another installment...

Yeah!! Another installment! Love it! I didn't realize I missed these. Thank you!

I found myself thinking, "Hey, there's the Tom's!" like he's a beloved old character from the original trilogy. Because ... well, he is. Once you anthropomorphize deodorant, you can't go back.

I just choked on my coffee. Holy shit that was what I needed today (the laughing, not the coffee choking haha)

Thank you!!!! I have so missed the Deodorant Wars!!! And this was the best yet!!!

This was up to your usual standards of hilarity, and then ... the ending. OMG. I died. Completely died. Horatio humor wins every time.

This may be your best (deodorant-related) work yet! Awesome.

My God, you are brilliant. "You never forget that smell." Bwaaaaaahaha! This made my week.

Love the set up and shift away from soap opera to film noir. Much awesomeness.

you make me laugh!

i'm just hoping the sister will have a love interest in a later episode... old spice red zone swagger!

F***IMG AWESOME!! just made my bad day go away. Thank you!

AHAHAHA that was awesome!!! I have loved all the Deodorant Wars. [Yes, am a long-time lurker].

"She may have looked like a dame's deodorant, but she had the crime and odor-fighting skills of a man. I had to admire that." LMAO!!

Yeah, what was up with those Secret commercials in the 80's, "Strong Enough for a Man, but made for a Woman." WTF.

AHAHAHA that was awesome!!! I have loved all the Deodorant Wars. [Yes, am a long-time lurker].

"She may have looked like a dame's deodorant, but she had the crime and odor-fighting skills of a man. I had to admire that." LMAO!!

Yeah, what was up with those Secret commercials in the 80's, "Strong Enough for a Man, but made for a Woman." WTF.

BEST DEODORANT WARS EVER. I can't even pick out favorites, there are too many. Omg Amy, I love you. Still LMFAO!

Baahahahahaha. Ridiculously hilarious. Back when my brother and I were first discovering the internets there was this interactive comic-game series on AOL called "Detective....in a jar" that was a bran in a jar with some wires going around solving crime. I am wallowing in 1998 internet nerditude. Thank you.

I just love it. That is all. LOVE IT.

God I lurve you!

That was fantastic. Particularly the sunglasses at the end. :)

Love, love, love this!! The last "YEAAAHHH" was perfection... this whole entry made me think of that show.

Oh, deodorant wars! This and the microwave cookbook are some of the most hilarious things out there.

THAT, was sheer brilliance.

If this is your post-partum brain, we're going to need you to keep having babies. Strong, strong work.

You are such a good writer!
Thank you for that. I don't know how you find the time but hi.lar.i.ous.

You are an amazing writer. How were you able to do this? See I wish I had cool talents like this.

You realize with every update I have to go reread all the previous ones. Much like the Harry Potter books...

hahaha oh my god I am so glad this is back!

hahaha oh my god I am so glad this is back!

The most creative and entertaining thing I've read on the internet in a very very long time.

Is it wrong I already want the next installment?

Oh God, you slay me!

I love that this was an old black and white mystery that somehow ended with a CSI Miama tie in. You're like a magician!

I love that this started as a perfect black and white murder mystery that transitioned beautifully into CSI Miami. You're like a word magician!

This is amazing in so many ways.

First of all, this:

"Sweat is one thing. Nothing can protect you from a full-on dunk in the shitbowl."

Second, Horatio Cane? My God, woman. How you take care of three kids and have the time to write amazingly creative blog entries is the real mystery here. If it's possible, I think I love you even more.

Also, I'm sure you saw the Diablo Cody shout out on Twitter the other day, but I was like, "Diablo and I have the same taste in Mommyblogs! Am witty/hilarious by proxy! Wheeee!"

but but what about Tom?

I think I love you and your "mato-head" glasses.

This is the best installment yet. I am amazed at your post-pregnancy brain cells working so creatively.

You put to... internets... the things that I think about all the time. I am constantly personifying things... and, well... you rock.

All hail the triumphant return of The Deodorant Wars! Wooooooo!

That's minutes of my life I will never get back.

This was the BEST INSTALLMENT EVER.

"They're well past their expiration dates but it turns out once you anthropomorphize a bunch of deodorants for blogging purposes, it gets awful difficult to just toss them in the trash."

So damn funny. That's minutes I've my life I'm GLAD I will never get back.

Thanks for the laugh!!!

I love the deodorant wars! This was the best one yet.

Sooooo relieved that I was not the only reader to think "Tom's!!" when I looked in the drawer.... *embarrassed giggle*

I love the deodorant wars :-)

I love the black and white. And "Dovecakes"!

Absolutely made my day! Your writing is spectacular--love the "Noir"--Garrison Keillor needs to hire you! :)

I didn't even realise I could miss deodorant wars until I noticed how giddy I was that they were back! I think this was definitely the best one yet! (And I'm thinking it was the younger sister trying to throw the detective off the case. She was insanely jealous of her older sister!) hehe

What everyone else has already said...love it!!!

LOL the best one yet!

LOL the best one yet!

LOL! Best one yet

LOL! Best one yet

Deodorant Wars is probably the biggest reason I started reading this blog.

Colleen's right: best one yet.

Never commented on these segments; never really liked them, to be honest, (read them anyway) but this one was brilliant, Amy. :) Excellent laugh during my workday, thank you!

Yep, this confirmed it. You are teh awesome.

Thank goodness you published this. I just love a good crime story ;)

Can we please get a crossover episode with the Isle of Sodor? Someone's just dying to be tied to the tracks. ;)

Brilliant! I should have done my thesis on this instead of theater for schools. And it's in a film noir style no-less! Love it.