Things We Did This Weekend Instead Of Seeing Harry Potter

(Wait, I have more to say about that:)

1) I went to the previously mentioned kickboxing class at Noah's karate studio. It was...um...intense. I remained upright and participating the whole time simply because of the peer pressure. I was assigned a bag next to a woman who was much older than I was and I couldn't take the embarassment of walking out after the first 15 minutes like I actually wanted to. So I stayed. Every time I tripped over the jump rope I would glare at the jump rope, like it was a defective jump rope. Like it was the jump rope's fault. And I think my jabs, hooks, and cross punches were all pretty much the same damn punch. Best described as "ineffective girly swings in the general direction of the punching bag."

But. I stayed. I did the entire workout, save for backing off most of the more intensive ab muscle work.

Afterwards, I melted into a little puddle of sweat on the floor and slithered home without signing up for the monthly membership.

2) The next night, drunk on my own perceived awesomeness, I started the Couch to 5K program. For some reason I assumed it would be easy, since I've done it before and oh yeah, I completed 40 whole damn minutes of kickboxing at the local strip mall, CLEARLY I AM AN UNSTOPPABLE FORCE.

In other words, when the little voice on the training app said "HALFWAY" I shrieked out loud and almost tripped over my own feet in shock, because I thought I was almost DONE, because AHHHMAHGAAAAH RUNNING SUCKS SO HARD I WANT TO LIE DOOWWWWWN WAAAHHHHH.

3) On Sunday I was determined to do as little physical activity as possible. This was an easy goal to accomplish, because I am pretty sure most of my joints were no longer functional. We went to see Winnie the Pooh. (Full review-ish thing here.)

So obviously, we were pretty busy once we got back home.

First, we needed to dust off the old map. 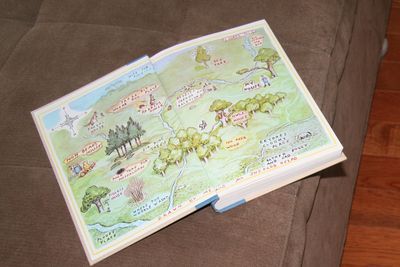 Then, we drew the fearsome, terrible Backson. 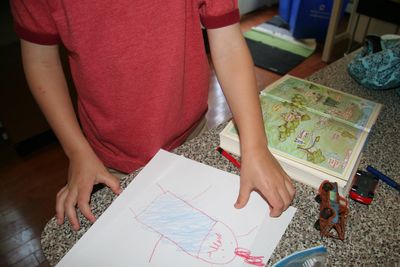 And set him loose in the crib blanket my cousin made for Noah before he was born Hundred Acre Wood. 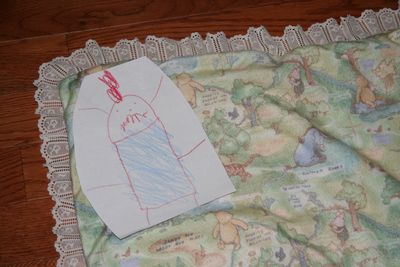 The only Pooh I could find in the house was a rattle attached to one of Ezra's old teething blankets, but he turned out to be quite sufficient. 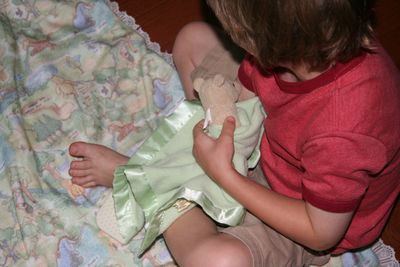 We then enlisted some Backson-trapping help from Hedwig Owl, Promotional Tiger From The Hangover 2 Tigger and a knock-off Pillow Pet Eeyore. 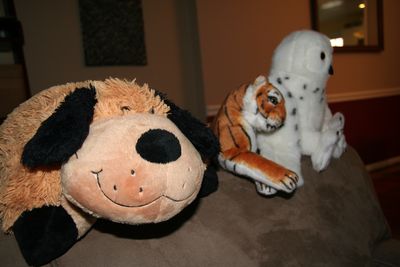 A trap was set with a Hunny Pot. 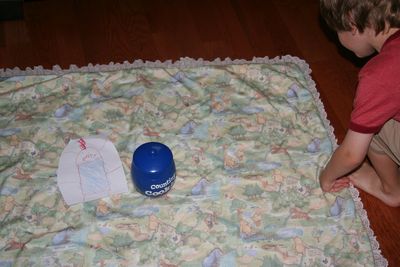 And success! We caught the mythical Backson. I have no idea what we're going to do with him now, as sadly Noah's initial suggestions were a tad violent to be considered from the Milnean canon. It seems my plan to restrict him to only the first three Harry Potter films has still left him with plenty of knowledge re: monster murdering. We will stab him in the nose with sticks! And then with a sword! Also laser guns. Pew pew!

Later, Ezra catered the cast party. He made an assortment of soups and wooden cheese sandwiches. 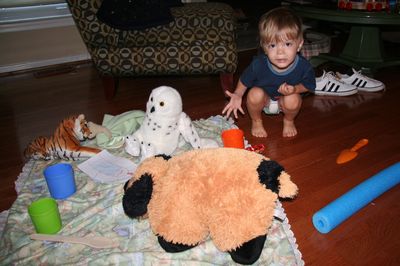 Lightning McQueen was invited too.

(Enjoy it, car. Looks like your 15 minutes of movie-fueled obsession is over, and not a moment too soon.)

Get thee a babysitter! ;)

However, it looks like you had a lovely weekend.
(And now I feel bad for mocking the heck out the Pooh movie previews/commercials).

I'm determined to start the C25K program too! Good luck.

As a stand-alone movie it was fine, but if you're looking for anything that resembles the book at all, or anything that highlights like..the whole effing point of the series or ANYTHING LIKE THAT, well, then, DISAPPOINTMENT AHOY.

You are bitter about not seeing it, I'm bitter now that I have.

I've avoided Winnie the Pooh so much that I refused to let my children have anything Pooh-related. I think it stems from middle and high-school, when it was (somewhat?) fashionable for adults, or teenagers to have cartoon-character clothes. I guess I've never gotten over it. But maybe I should rethink it. That movie sounds so sweet!

You are TOTALLY unstopple. Yep.

PS That looks way more fun than my weekend, which involved a very unpleasant sinus cold and the care of a very demanding three-year-old. I barely feel adequate to keep her alive and entertained most days, so I am in complete awe that some parents can manage MORE THAN ONE CHILD. My hat is off to you. Unstopple, indeed!

Normally do not argue about movies, but, Am total bookworm, book lover, book fangirl, and for the first time in my life, I thought this movie was better than reading the book. It had every single thing I would have died without seeing, and bits that were changed were done in a great way.

Also, I can't wait until my kids are old enough to need to act things out "the right way" (eg with your complete cast of assorted stuffed animals) and to keep at it from start to finish. That is so freaking adorable.

My personal favorite quote from Winnie the Pooh movie.
Eyeore: "We're all gonna die." Shot soda out of my nose when he said that...

What Pooh book do you have? Please recommend!

My 5 year old said he wants to see it and I didn't believe him. Maybe it does make him remember his sweet nursery and all of the books we read him.

@Karen The World of Pooh. It's a hardcover treasury of Milne's original Winnie the Pooh stories & The House At Pooh Corner. I though someone gave it to me when I was pregnant but now that I'm looking at it (and the copyright date) I realize it's actually a book I had as a child. Whoa.

Awesome! I too, have not seen harry potter 7 pt 2 and I am chomping at the bit. However, its not due to lack of babysitter, its due to the baby factory in my belly that makes me SUPER TIRED. Looks like you had a fantastic weekend though anyway!

Awesome! I too, have not seen harry potter 7 pt 2 and I am chomping at the bit. However, its not due to lack of babysitter, its due to the baby factory in my belly that makes me SUPER TIRED. Looks like you had a fantastic weekend though anyway!

My 7-year-old asked to see Winnie the Pooh and I was sceptical, but we went, and she loved it, and I - a big Winnie fan when I was child (but the "real" one from the books, not the Disney version, which didn't actually exist when I was a child. THAT IS HOW OLD I AM) - managed to fall asleep during it. I'm bummed, actually, as it seemed really good...
Oh, and both my girls got "Now we are six" (a collection of poems by A.A. Milne) when they turned 6... I think it's wrong that Disney has made Winnie into a "baby" thing!
Oh (again) and neither of my girls (9.5 and 7) are at all interested in HP films as they are "too scary"... We recently saw "Hop" and we all enjoyed it, to my great surprise.

I started the Couch to 5K plan too. It's amazing how LONG 1 minute can seem when you're running it...and how SHORT 1.5 minutes can seem when it's your only break from the evil running! :)

Also, admission time...I am *totally* going to see Winnie the Pooh on Friday. I am 31 and have no children, nor will any nieces/nephews/friends' children be joining me. I just really want to see it!

Your kids are adorable and brilliant! I love the way you describe their imanginative play.

And congrats on starting the couch to 5K! I just started working out again this weekend, but I'm no where near 5K ready, running or walking. Or biking. Or really any kind of -ing that doesn't involve motorized vehicles...

This is what you missed by NOT bringing your kids to Harry Potter.

My kid: But they're about to kill Snape. We have to go.

My kid: You're ruining my formative years. I'm going to suffer from Post Traumatic Stress Disorder if we don't leave the theater this instant! Don't you care about my mental health?

My kid: I'm going to scream really loud, "I've been kidnapped, this is not my mommmmmy!"

Me: Even if you point your Harry Potter wand (which I bought you BTW) and scream "Crucio" you can not pry me from this theater.

A silent beat. My child raises her wand. "Avada Kadavra."

I knew no more.

Adorable, what exactly is the pool noodle for? :)

I love using the blanket for the play space!

I also did not see HP yet. It will be a while as I am a TRUE fan but also a TRUE tightwad and would much rather see HP with my family a few times at the dollar theater than once at full price and not be able to buy groceries that week. But I'm silly like that...

omg, u so funny. u always make me lol. xoxo.

That picture of Backson looks like an angry penis to me. WHAT IS WRONG WITH ME?? Make it stop.

Dude. *I* live in D.C., and I am super fabulous babysitter, and I am not even remotely intimidated by an infant adn two other boys. BRING IT ON.
also HP was AWESOME and EPIC. and the first movie I have ever cried at.