I had big plans for today -- I really did. Today is -- was -- my last day with alllll my boys to myself before school starts. The babysitter comes tomorrow so I can pretend to be all business-y and important, and then the day after that we're heading back to the beach for a few days (with Tracey and Charlie! THERE WILL BE VELVEETA DIP AND LUGGAGE CART MAYHEM.).

And then Noah's school starts like, five minutes after we get back. And then Ezra -- EZRA! BABY ZAH! -- starts school a few days later. Today was it. (Until the first random holiday or teacher in-service day that I will not be aware of, and will be all, SHIT NOW WHAT when I realize we're the only idiots out at the bus stop.) I was going to swallow my fear at being anywhere out in public with all three boys and MAKE SOME GODDAMN MEMORIES IF IT KILLED US ALL.

"Who wants to go to the pool?" I asked them, over breakfast, and then waited for my barrage of joyful, grateful, life-choices-affirming squeals.

"Okay, how about the...splash park?" I offered, even while I trembled in fear at the prospect of chasing them around a giant glorified water fountain all day with a baby strapped to my chest.

"No thanks," said Noah, as if I'd just offered him a complimentary toenail clipping.

"Uh-uh," said Ezra, with a similar level of enthusiasm.

"Well, we could go to the mall? A playground? Go out for pizza? Ikea?" I was getting desperate.

The boys had completely tuned me out by this point and were playing lightsaber battle with their cereal spoons. Finally, Ezra had an idea.

"I want to play in the BASEMENT!" he said, and Noah promptly agreed that this was a kickass, bitching idea, and off they went to basement playroom, a place I usually must beg and beg for them to pleeeeeease go amuse themselves for five measly minutes on any other day of the week.

(Ike's contribution to the proceedings: "Blarrrfffggh.")

So. We haven't really done much today. Made some messes, ate some macaroni and cheese, sorted ourselves into Gryffindor... 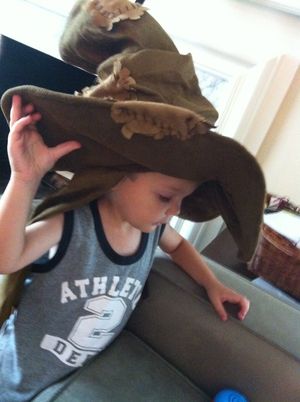 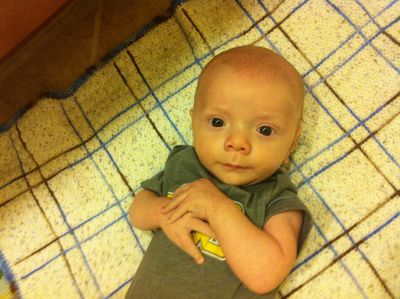 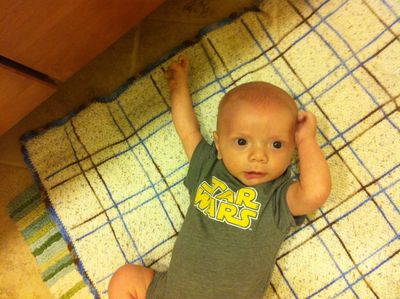 Finally put on pants in an attempt to convince Mommy that we weren't at all tired... 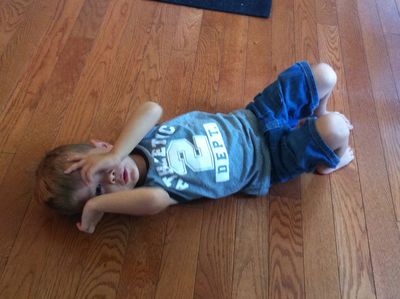 Snuck out of our room while Mommy was showering to give a roll of toilet paper a bath in the sink... 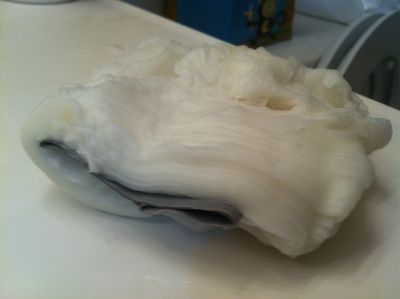 Thus clogging the drain with disintegrated paper mush and overflowing the sink and flooding the floor... 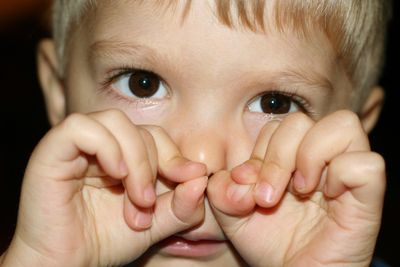 In the end, I think everybody* had fun after all. Other than the toilet paper.**

*Noah is Not Pictured because he opted to remain sans pants most of the day.

**Perhaps we are dealing with a serial killer?

Never have I seen Ezra look as much like Noah as in that last photo. Woah.

Looks like you've got to protect the other inanimate objects in your bathroom that you don't want to die a sad death in the sink/toilet/tub!

I found a bug in my macbook screen (a real, live one) that I thought was outside and so I went to squish it and now there's a dead bug squished in my macbook screen. I feel like a flooded bathroom is a much better afternoon than looking at a squished bug for eternity! Also, am hoping applecare covers this sort of bug.

pants-wearing and happiness have been scientifically correlated! http://mit.edu/kenta/www/one/venn-diagram-no-pants-truly-happy.html

Glad you all had a successfully happy day.

Sounds like you had an awesome day. Minus the ... toilet paper bath ... of course! :P

My daughter is always happy to play at home. Then my mom stops by and she starts wailing "go Grandma's house!"

Love it! Sometimes stay at home days are the best, and sometimes they're the worst. I'm glad this was a good one for you.

Just got back from the hospital with my brand new three day old daughter. Need to hear that killer cloth diaper for infants and above blog post we've been waiting for. Hook it up girl!

Sounds like you made the absolutely PERFECT kind of memories.

Sounds like your boys knew everybody needed a mellow (well, mellow for children) day at home. I love days like that, sans tp in the sink of course.

Sometimes these are the best days! And I've had that toilet paper moment in my house - silly boys.

best kind of days-you just know those are the ones they will look back and remember. enjoy the beach!

Ezra is getting so big!

That sorting hat is AMAZING.
Is it lame to admit that I totally want one... as a wedding gift??

And then Noah's school starts like, five minutes after we get back. And then Ezra -- EZRA! BABY ZAH! -- starts school a few days later. Today was it. (Until the first random holiday or teacher in-service day that I will not be aware of, and will be all, SHIT NOW WHAT when I realize we're the only idiots out at the bus stop.) I was going to swallow my fear at being anywhere out in public with all three boys and MAKE SOME GODDAMN MEMORIES IF IT KILLED US ALL.

I am glad to see that my son isn't the only one amused by a wet roll of toilet paper.

Totally enjoyed the publish in the first word till the end. Outstanding job very well performed there. Keep up the fantastic job!

I can relate! Stay in and don't feel guilty about it but Toilet paper beware! Everyone knows the toilet roll should roll out over the top right? Are you kidding me! not with little ones around, turn that roll around so they can't spin it.
Be glad you don't use baby powder, we had an "episode" back in the day, two toddlers, one living room = total disaster!!