So you know what I decided I needed? I needed another blog. Or maybe it was a hole in the head. From which even MORE of my every vapid, passing thought could flow more freely out of.

Anyway, I done got my arm twisted into blogging about...oh my God, you guys, I have NO IDEA WHAT I'M GOING TO BLOG ABOUT. I was actually sold on the idea of these salon-style conversational things we'll be doing with all the Babble bloggers, but we aren't actually doing those yet, so in the meantime I have nothing to talk about. So I'm getting all kinds of weirdly meta over there about blogging and IT'S WEIRD, Y'ALL. Also kind of cricket-y. But! Samantha Bee! And Dino Dan's Mom, whose presence has officially (though surely temporarily) made me the absolute coolest, in Noah's opinion.

But yeah. If anybody has any topic ideas they want to throw into consideration, go right ahead. I clearly don't know what the hell I'm doing over there yet. (Just don't say cloth diapers, because I KNOW I KNOW I'M WORKING ON IT, and don't say anything about baby food or kid food or gardening, because I have another plan for those subjects, because I will not be happy until I have chopped up every possibly distinct part of my life into the most jacked-up million-slice piechart of blogs EVER.

Anyway. I'm exhausted now from all this thinking. Here, allow me to kind of freak your shit out a little bit: 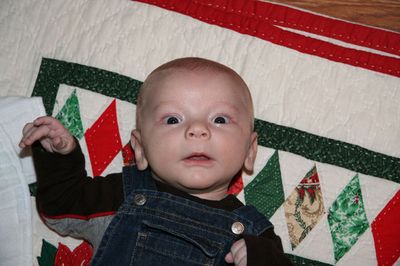 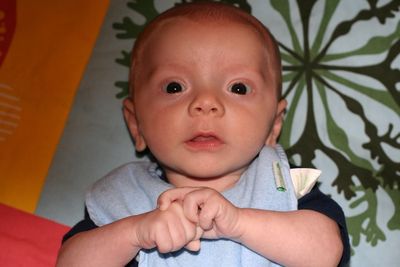 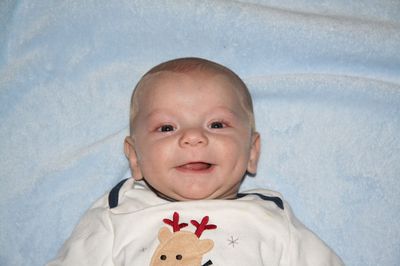 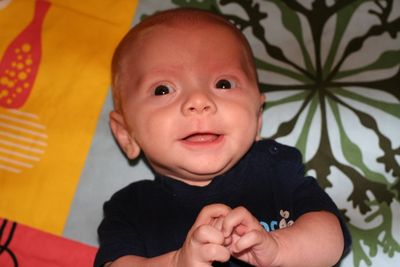 Hmm. So maybe it is a good thing I'm adding another blog. This one is clearly stuck in reruns, anyway.

PS Ezra at 12 weeks, for reference and proof that occasionally I do indeed make a slightly different variety of baby.

That's exactly what I though, E! You might have to develop some complicated algorithm like (months old + long-sleeves)/Christmas quilt(2)*reindeer shirt=X, where X=BABY. Whew.

That IS crazy! Great pictures.

My kids are the same way, except one's a girl and the other's a boy.

Clara's algorithm! Ha! Also, I could never get enough of your blogging, so hooray for more pieces of the Amalah pie! NOM NOM NOM.

WOW, that's amazing!
My Mom said that my sister (2 years younger) and I were practically identical until about 3 months old. Now we are so different, people don't believe we're related.
But if they look the same, that's ok-both are super adorable!!

It's so weird, I usually think they don't look alike. And then you post same age pictures and its kind of WOAH.

Cute! Maybe just have him wear shirts that say IKE on them until he stops looking so much like Noah. Then, no labeling problems!

Ideas to blog about - this is fun! I often want to request things, but don't want to be "that reader" who essentially is annoying everyone by screaming FREEBIRD!

But ... FREEBIRD! I would love to read about the marriage/relationship side of things after kids. I know you do some of that here, but it's more about the family as a whole (which is great!) rather than really marriage focused. Don't get me wrong, I LOVE this blog and can't get enough kid pics. I just think there's a reality of marriage - especially after kids - that is both better and harder than we are prepared for. Confession: I am neither married nor a mother, but it's something I'm very curious about. I think your combination of humor and honesty would do the subject a great service!

oh, ike has noah's same hairline, eyebrows, nose, cheeks, smile, and chin. but he's got ezra's big eyes! love the baby pics. i could just nom on them!!! (but i have my own baby at home, i'll just nom a little extra on him.)

Personally, I'm trying to figure out who I am, aside from Mama. I'd love to hear about stuff you do (aside from work) that satisfies or enriches you as you, not mom or writer. Or maybe, you struggle with that too?
All I know is, I thought hard for weeks and could barely come up with 1 hobby that I am excited about. It was kind of sad.

Good suggestion, Bekki! I know a lot of my friends struggle with that.

I hope you write names on the back of pictures or have them "carefully organized into different folders" on your computer, because Lord woman, you'll never remember which is which when you are old. Which you are not, now, of course.

Woah. If you had told me that first picture (of Noah) was a picture of Ike, I would have been all "....Duh?" and gone about my day. Total twins!

I thought the first picture was Ike! I've always thought that Noah looked like both you and Jason, Ezra looks like you and I think Ike looks more like Jason.

Since you are heading West, implying taking RISKS etc

I have a question - have you ever changed one of your positions on something significant based on comments from or arguments with any of your posters??

Maybe topic something "Knowing when to Eat crow or back down etc.).

And I was the weird girl who people liked but made fun of often.

And ONE TIME I had the opportunity to do the same to someone else. And I took it. And I made her cry. And 33 years later I still remember it.

Karma's a bitch though. YOU SHOULD SEE HER HOUSE - her CUSTOM BUILT HOUSE and her KIDS and HER GRANDKIDS. And her. She could WIN Mrs America. Sigh. LOL

Amy, how do I subscribe to the RSS feed for your new blog? Those Babble blogs confuse me so...

This isn't supposed to be in the least a negative comment, but just wondering if you wonder like I do. As in, I obsess about negative outcomes of everything.

Long way to ask, with as much as Ike favors Noah in looks do you worry he will have the same challenges that Noah has?

All 3 are so adorable it almost makes me want to have one at my advance age.

I finally feel validated, that after every picture of Ike, I thought "Gosh, he is the spitting image of Noah."

(Yanno, because your other bajillion readers didn't think the same thing.)

I think that you should write about planning your wedding you Jason- you were a young Amalah and didn't stab anyone. How did you manage it? (Totally unrelated to ANYTHING current.)

Love the new blog-yip yip! Love the pic of you- you must share your keeping your hair beautiful not faded out ugly red secrets- pretty please.

DUDE YOU CLONED YOUR KID. That is pretty amazing.

(And congrats on the new blog!)

Yay new blog! P.S. Can you ask them to set it up so one can "RSS" subscribe to the Babble posts? I have this problem with other Babble columns that I read too :-/ .

As for topics - what about some "old-school" stories about you/Jason, like what it was like growing up, growing up in a conservative environment and how that is influencing you now, etc. Though you may have covered some of these before.

Maybe boring, maybe done already, but I found my third to be the most fun and relaxing. First kid-have to do it right, second kid-holy sh*t, this one is different, third kid-whatever, it's cool.

Over-scheduling extracurriculars? There is no need to sign your child up for an activity every day of the week. It's hard to resist, I get it, but NO. Dance on Monday, piano Tuesday, karate Wednesday, soccer Thursday, and book club Friday IS NOT OK.

All three are beautiful, and from the day you first posted pics of Ike, I thought he and Noah were almost identical.

That said, and not knowing any of them, Ezra's my fave. He always looks just a little devilish--and since I don't have to deal with him, I find that irresistible. :-)

For a topic, how about parents who dont regulate on their kids. You know the ones- they warn and warn and then let their kid do whatever. Share please, share please- then nothing. Drives me nuts.

For a topic, how about parents who dont regulate on their kids. You know the ones- they warn and warn and then let their kid do whatever. Share please, share please- then nothing. Drives me nuts.

It seems like your children all really like each other. How did you do that? My older one (almost 3) doesn't want to have very much to do with the younger one (5 months).

Anyway, I done got my arm twisted into blogging about...oh my God, you guys, I have NO IDEA WHAT I'M GOING TO BLOG ABOUT. I was actually sold on the idea of these salon-style conversational things we'll be doing with all the Babble bloggers, but we aren't actually doing those yet, so in the meantime I have nothing to talk about. So I'm getting all kinds of weirdly meta over there about blogging and IT'S WEIRD, Y'ALL. Also kind of cricket-y. But! Samantha Bee! And Dino Dan's Mom, whose presence has officially (though surely temporarily) made me the absolute coolest, in Noah's opinion.

I was very glad I labeled all my baby photos so carefully, because I had a series of little baby clones too.

And welcome to Babble! I'm thrilled to be in such distinguished company!

Whoa. That's crazy! No one in my entire family looks even remotely similar (some, not even remotely human), and those two could absolutely be the same kid. Very cool. It's also interesting how I can see so much of you and your husband in them. Genetic roulette --- and you keep landing on the same space :) (I'm not a gambler, so use the correct roulette terms in your head when you read that).

What about info on recovering from a C-section? I am having all kinds of problems from the "natural" birth, maybe have to have surgery even, and am thinking about having a planned c-section next time-just wondering about it.

OMG, you've had twins, just separated by a bit. And another baby. Shit = freaked.

Although. You certainly do produce the most adorable little turtle-faced babies.

Very nice, thanks for sharing.

As a lonnnggg-time reader, but single and childless woman, I consider it my duty to introduce your various blogs to my friends who are embarking on the pregnant/mommy journey. And I feel bad when internally I think "I guess your baby's cute, but he's no Noah..." and the like. Oops. I promise I'm a good aunt and "aunt." Anyway, I'm excited about the new blog, and just wanted to get a little fan girl for once, and tell you that in the banner photo on Amalah West you quite resemble Jennifer Morrison.

I think that's the same baby in all 4 pictures. Either Noah or Ike. I can't be sure. Hmmm...can you?

Love the blog here. Nice colors. I am definitely keeping up on the comments here. I hope to see more from you in the near future.

Someone asked about worrying about disabilities. I miss your posts about that on the Isn't he Special site. I am watching my little guy so closely for similarities and sigh inwardly everytime I see something different between the boys. Then I beat myself up for it.

I think it's cute how you think Ezra looks so different from Noah and Ike. My Ezra recently found a pic of his older sister when she was 2 - he thought it was of HIM (he did indeed wear that same sweater years later) and she was all, 'Really? I find that OFFENSIVE....'
And I was all REALLY? BECAUSE I FIND THAT OFFENSIVE, oh small replica of me who made her entry into the world via my very own vagina.